The LEGO Star Wars line is finally getting its own BrickHeadz characters, starting with the NYCC-exclusive 41498 Boba Fett & Han Solo in Carbonite, along with 41485 Finn and 41486 Captain Phasma. While it currently remains a Target exclusive, we recently picked up the double-pack 41489 Rey & Kylo Ren Limited Edition Collector’s Pack, which retails for $19.99 and includes 249 pieces. 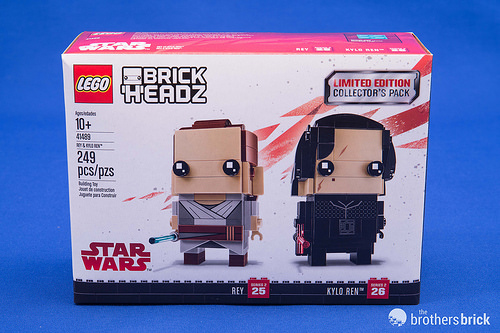 BrickHeadz sets generally come in small, square boxes. But with this two-pack, the packaging for this set is a double-wide box that accommodates the parts for both characters. Unlike the much-more-limited “Limited Edition” Boba Fett & Han Solo, the packaging material is the standard, thin cardboard used with all previous and current BrickHeadz. 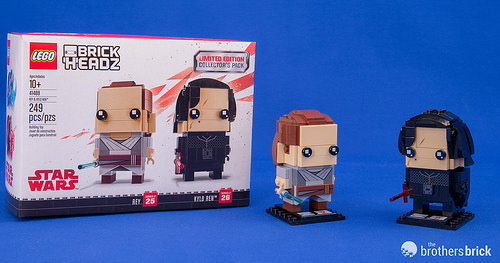 The back of the box shows the rear of both characters, highlighting their very detailed hair. 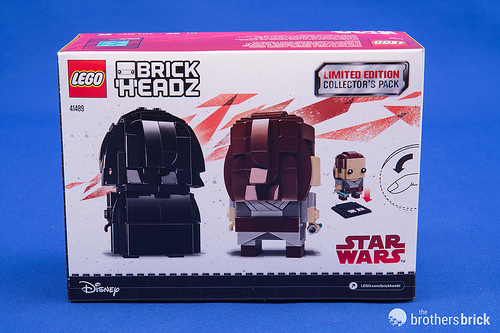 Each of the characters comes in its own bag, with separate instruction booklets. 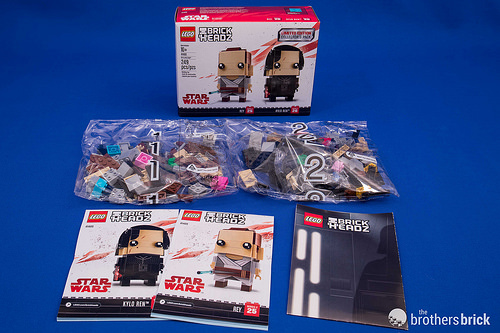 There’s also a flyer that says “Coming 2018” with a generic BrickHeadz standing in front of a shadow of Darth Vader, reminiscent of some of the first teaser posters for The Phantom Menace (where young Anakin stands against a hut on Tatooine with Vader’s shadow behind him). 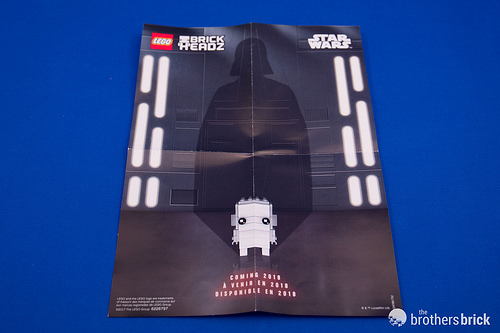 By now, we’re all fairly familiar with the studs-out building techniques used in BrickHeadz, complete with the pink 2×2 “brain” piece in each character’s head. 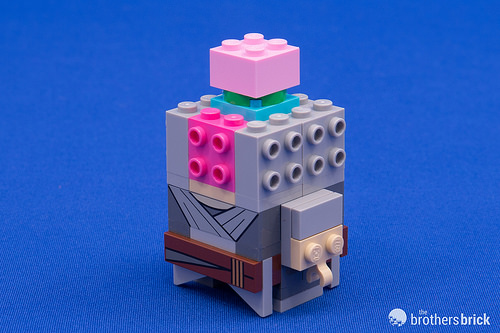 However, there are a couple really cool techniques, including a Technic axle with a stud attached to interior bricks with axle connections, thus ensuring that the 1×1 printed tile (Kylo Ren’s belt buckle) doesn’t spin around. 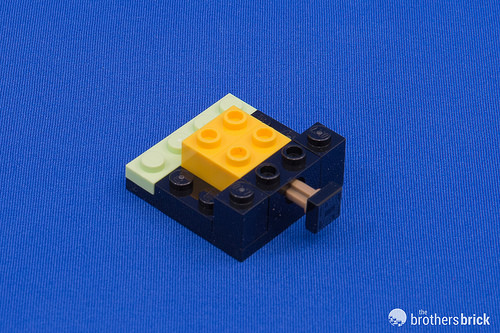 Most BrickHeadz also rely heavily on a number of printed elements for detail, and this pair of characters is no different. Kylo Ren includes six printed tiles, plus the “Series 2” base tile (confirming Phasma and Finn as Series 1) and extras for both 1x1s. 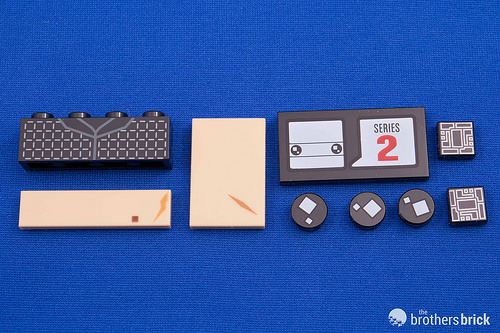 Rey has five printed elements, including a pair of printed 1×4 bricks for her robe, plus the base tile and an extra twinkly eye tile. 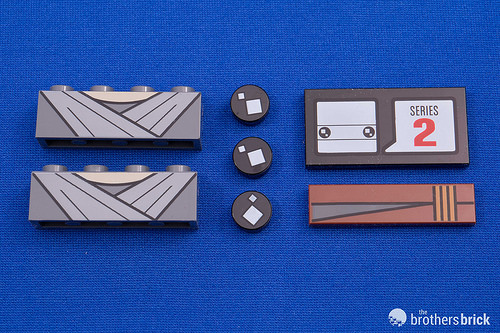 Other than the printed parts, there are no new elements in the set, unless you count internal pieces in some new colors, like these 1x1x2 bricks with studs on one side in brown. 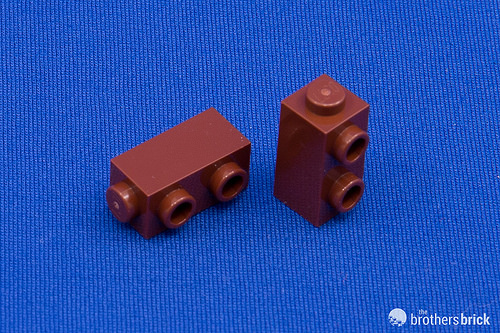 I think international law requires at this point that we use the word “adorable” at least once in each BrickHeadz review, so here it is: Both Kylo and Rey are truly adorable in BrickHeadz form, bringing to mind the wonderful Star Wars/Calvin & Hobbes mashups by illustrator Brian Kesinger. 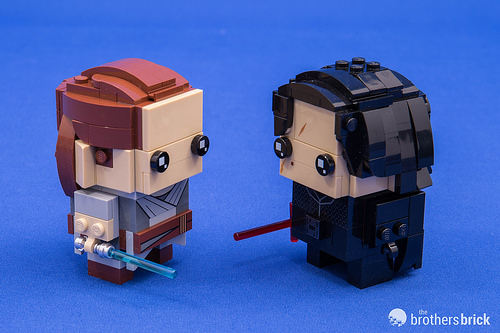 All right, with that required statement out of the way, let’s take a closer look at the actual characters. Kylo Ren is, unsurprisingly, mostly black. He has flowing black hair, and a flowing black robe. The standard way that BrickHeadz hold accessories has Kylo carrying his lightsaber at his side, which makes him look even sadder than the sad sack he is. 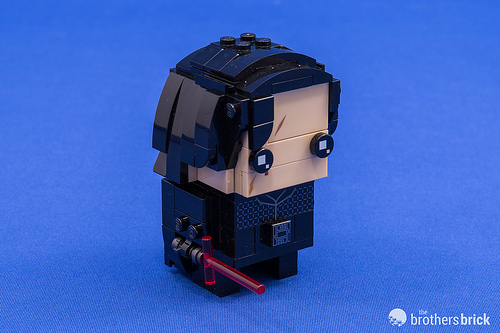 His hair has cute little flips that add detail. 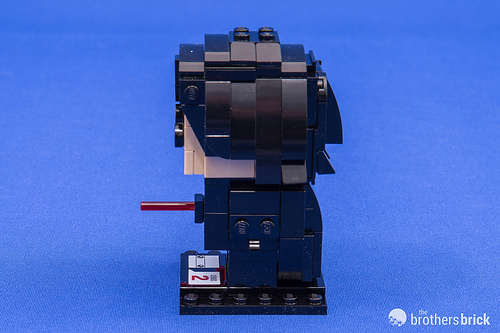 His black cape is built from curved slopes and tiles, and this view also highlights his great, brick-built hair. 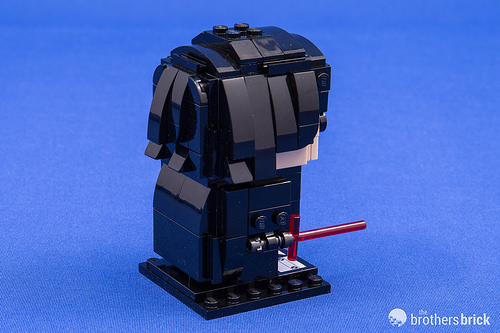 This version of Kylo seems to depict him as he’s seen in The Last Jedi, with some new scars across his face. A single lock of hair falls across his troubled forehead. (“I feel it again… The pull to the light…” Oh, so emo!) 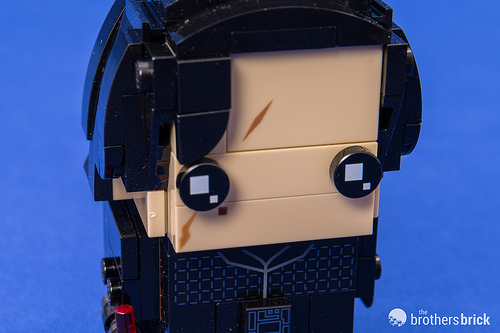 Rey is one of my favorite new Star Wars characters, so I was glad to see that the first couple waves of LEGO Star Wars BrickHeadz included Rey. She wears grey robes, and her hairstyle is the looser style from The Last Jedi. 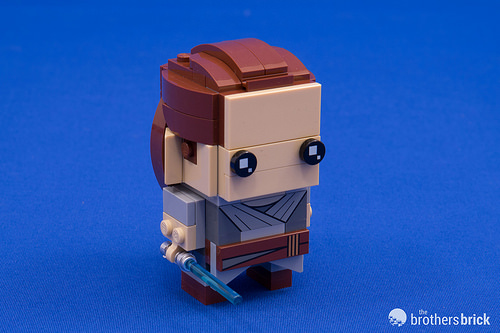 Her hair is the most detailed part of the build, full of quarter-round 1×1 tiles, 1×2 “baby bow” slopes, and cheese slopes. Her braid is attached with jumper plates. Interestingly, her torso is essentially identical front to back, with the same robe details and printed 1×4 bricks on both sides, though the rear of her belt is unprinted. 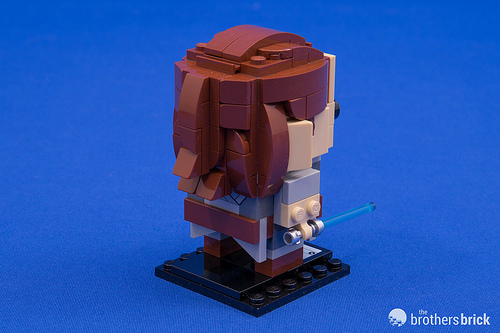 As with her antagonist Kylo, Rey’s hair has cute little flips. 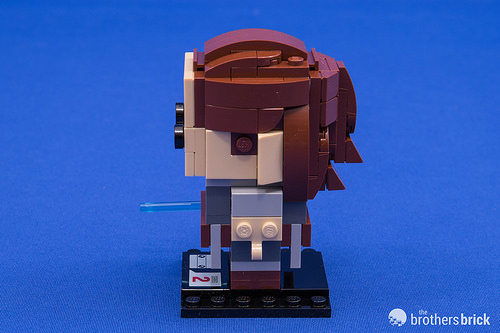 Although Boba Fett and Han Solo filled me with blind rage at their sheer awesomeness combined with their highly limited availability, I’m not as inclined to fly off the handle about a Target exclusive depicting important but less-iconic characters. Both of the BrickHeadz characters in 41489 Rey & Kylo Ren Limited Edition Collector’s Pack are very well-designed, with plenty of brick-built detail as well as printed accents. At the standard price of $10 per character, the $19.99 price for 249 pieces is actually quite a good deal. 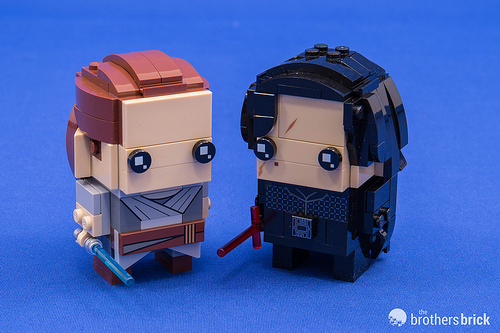 If you’re a fan of the new Star Wars trilogy, you owe it to yourself to begin building what is sure to be quite the collection of LEGO Star Wars BrickHeadz.