Tonight the LEGO Store in London’s Leicester Square hosted the midnight launch event for the stunning new 75192 Ultimate Collectors Series Millennium Falcon – the largest LEGO set ever made. Fans queued outside for hours to be amongst the first to purchase the new set, and the atmosphere as the doors opened was something akin to the air of hysteria which might accompany an iPhone launch. The patient fans were welcomed inside at midnight by a pair of Imperial Stormtroopers and the unforgettable opening fanfare of John Williams’ score. 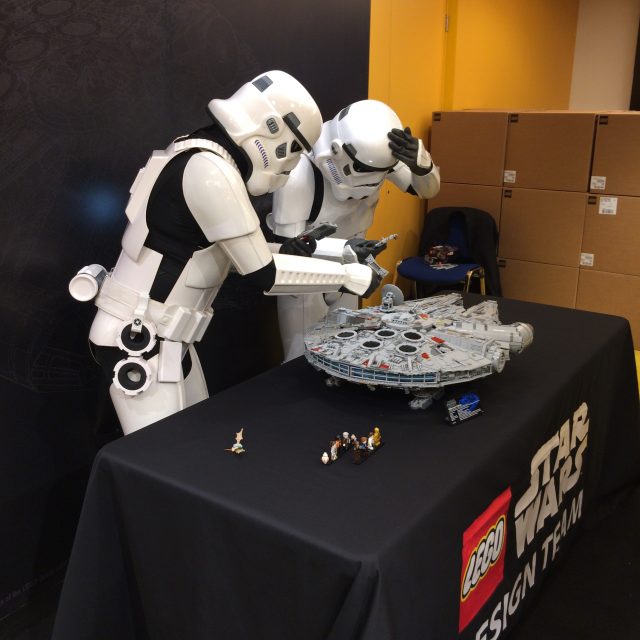 Those first in line were greeted in-store with rounds of applause from the gathered LEGO staff, and a wall of brown cardboard boxes – perhaps visually uninspiring, but a reassuring signal regarding stock availability for those further back in the queue. 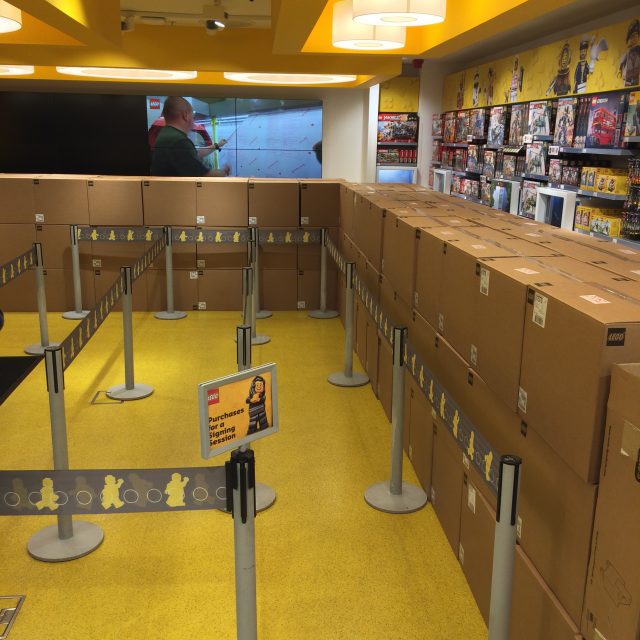 Happy purchasers saw their sets signed by designers from the LEGO Star Wars team. Even those who had waited longest in line said they’d had a good time, genuinely delighted as they wheeled their massive sets off into the darkness. The entire event was a testament to the continued power of Star Wars, and the enduring appeal of a really, really big box of bricks. 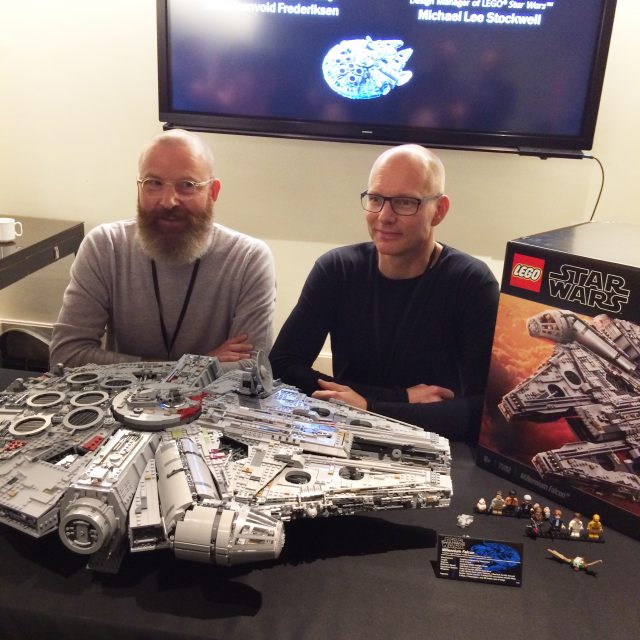 Prior to the midnight opening, the Brothers Brick joined other members of the press to meet with the lead designers for LEGO Star Wars – Jens Kronvold Frederiksen and Micheal Lee Stockwell. They shared some of the challenges of building such a large model, and their thoughts behind some of its features… 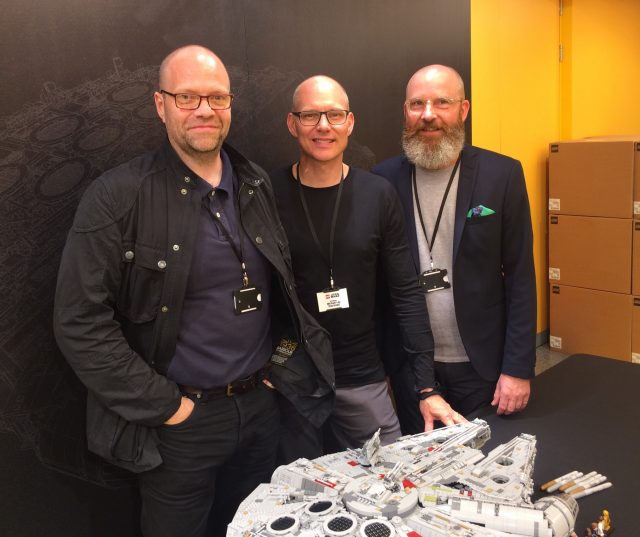 How long has this set been in the planning?

Michael: We’ve been thinking about it for years. Jens designed the original UCS Falcon years ago so we knew the scale was right – we had a good blueprint to start from.

Jens: But we knew we wanted to add interiors and more details. Some people have asked why we didn’t do the whole interior, but we did the key sections people recognise from the movies. And we have panel sections which lift off to reveal the interiors without losing the overall effect of the exterior. It all took more than a year of design from the first sketches. Getting the right level of quality was important.

Did you set out deliberately to create the largest LEGO set ever?

Jens: Yes, it was a conscious decision to make the biggest set. We wanted to create the ultimate LEGO set. And the ultimate Star Wars model. We’re probably at the limit of what we can achieve in terms of putting stress on the elements.

Michael: Adding over 2000 bricks to the original design really stresses the structure. It was important we got it right so you could move it around and it had stability.

Did the model’s sheer size create any difficulties in the design process?

Michael: We use Technic pieces when we need that structural strength, and we have a detailed process every model goes through to make sure we’re not overly stressing the elements. I’ve no idea how many different versions we built during the approval process. You lose track. You test each one with children, with people who don’t know anything about LEGO – to understand how they’ll pick it up, how they’ll want to move it around.

The extra 2,000 pieces over the previous UCS Falcon, what areas of the model did they go into?

Jens: All over. Yes the interiors add something, but there’s lots of additions all round. And we had lots of new elements from the last decade which we wanted to add in for extra details.

Were there any features you wanted to include but couldn’t? How much did a target price point limit your ambition?

Jens: We’re designers. We set out to create the ultimate set. We weren’t limited by pricing. We didn’t let that guide us.

Michael: The only thing we wanted to include but couldn’t was a fully-functioning hyperdrive!

What was the thinking behind having the different Star Wars eras represented in the minifigures that come with the set?

Jens: There’s the classic figures but also the new saga figures. We wanted to let people make the Falcon from the different movies – that’s why you get a choice of radar dishes. It’s the same with the figures. But we also wanted to do something new with the figures from the older movies – so we have Leia and Han with the breathing apparatus. That’s never been done before.

Michael: The addition of the Porgs is also fun – that came late in the day and we didn’t know much about them. We know a bit more now – but we can’t tell you about it!

Any worries you’ll never be able to top this model? What does it mean for future UCS sets?

Jens: We’re constantly trying to raise the bar, and whilst this model sets it quite high, we’ve got lots of ideas for future UCS sets.

Michael: We’re constantly learning, with every set. And that helps us design even better models in the future.

With this set following on the heels of recent large sets like the Saturn V, the Old Fishing Store, and Ninjago City, how do you respond to accusations you’re trying to bankrupt LEGO fans?

Jens: Ha! What do you want me to say? I guess we’re sorry for making so many cool sets. But seriously, there are a lot of adult fans who like the big sets, but our main thing is making toys for children. We love the big collector sets, but we still have to make sure we have a broad portfolio of models for different people.