Blare Media has finally revealed the full trailer for it’s brick-themed mocumentary Brick MADNESS. The film pits an underdog “Brix” builder against an arrogant long-time champion in a battle to build his way to not only fame, but redemption. The PG-13 rated film premieres on September 8th.

“IN A WORLD… without LEGO, Cedric Donovan, a critically acclaimed documentary filmmaker, is our tour guide as we delve deep in to the world of Brix. This is a world dominated by two titans of personality and success. The Godfather of Brix, Max Grand, is the 7-time champion and most famous competitive brick builder of all time. Unfortunately, he had his career cut tragically short when he was accused of “gluing”. There to pick up the torch was Ricky 6. He is brash, arrogant and extremely successful, having won 6 tournaments since Max Grand played his last. Cut in to Seth Paxson, a young hero with a heart of gold who has to save his charity from the clutches of deceit.”

Brick MADNESS is the culmination of 8 years of tireless work to make a film that not only captures the spirit of the massive LEGO subculture, but dramatizes it into a hilarious film that is both funny and heartwarming. It delves into the world of brick building with a sly sense of humor and an exceedingly curious approach to what, how and why these people build what they do. By mixing real-life brick builders and actual LEGO conventions into the fictitious world of competitive creation tournaments, Brick MADNESS is able to have fantastically funny scenes alongside genuine moments between real builders. Not only are the participants authentic but they lend a credibility to the story that mockumentaries rarely have the chance to attain. 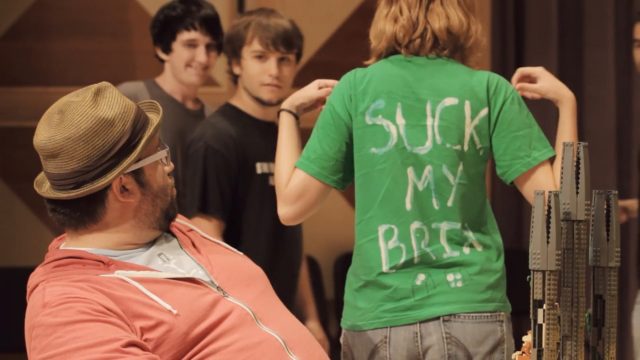 The film uses the mockumentary format to full advantage by creating a realistic world of camera, lighting, sound and editing choices where every point of view is motivated and earned. It is this attention to detail that helps the story rise above typical mockumentary fare that merely uses the device for a few obvious jokes and a looser style, but doesn’t seek to transcend those borders and deliver something truly memorable.

Interestingly, many of the brick-built models seen in the movie were designed by Carl Merriam, a former LEGO fan who we interviewed in June and who now works as a LEGO set designer at LEGO’s headquarters in Billund, Denmark.