This is one of my creations that has been waiting for a few months to be uploaded, for many irrelevant reasons. I think this one takes a bit of insight to be appreciated fully. While my build (on the left) is a servicable mechanical build on its own, its true strengths can only be appreciated if compared to the original LEGO Bionicle 8532 Onua set on the right, as this is a piece-by-piece LEGO System recreation of the classic first generation Toa Onua set. My version is completely unstable and unplayable, but visually comes close enough to the official version that it passes my personal quality standard. 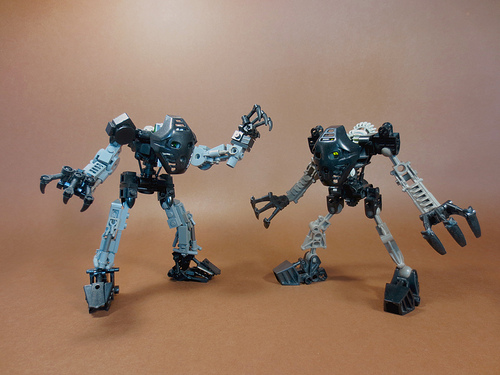 This was a somewhat quick build, but I was so inspired by the idea that it completely took over my life for a few days. It strikes me that Bionicle (or as the cool kids call it these days, “bonkle”) is quite similar to classic space in a way – while classic space is the most popular nostalgic theme for many older LEGO fans, Bionicle is the go-to nostalgia trip for ones growing up in the early 2000s, which makes it surprising how rare reproductions are. There are few even in the actual Bionicle building genre, but besides my build, I have only seen one other example of systemized Toa, but even that was just the builder taking his own spin on the concept.

Now, I have indeed built Toa Onua (because this one is the easiest to build due to wide selection of parts in both of his primary colours, black and very dark grey), and I see myself being able to build Toa Kopaka, but for any other ones my selection of parts just can not do. So here is a challenge to any builder brave enough and equipped for it: I would love to see more of the first generation Bionicle characters (or later ones?) made out of system parts!

4 comments on “These two Bionicles are not identical”