There was a (perhaps deservedly?) forgotten LEGO Castle theme from the early 2000s called Knight’s Kingdom with large figures, which introduced many specialized parts that appear to be hard to use other than for their apparently intended purpouse. You would expect me to reveal a surprisingly innovative use of such elements in the newest creation by Russian LEGO builder Red, but the real surprise is how elegantly the builder used the said pieces simply for their intended purpose, which is often a risky move among highly critical LEGO builders. On the other hand, there are many imaginative techniques throughout the build, which reward a viewer inspecting it closely. The best part, however, must be the figure’s menacing general shape, which gives a strong impression of a very muscular man in impenetrable armor, and yet keeping a strange sense of elegance – a perfect combination for a knight. 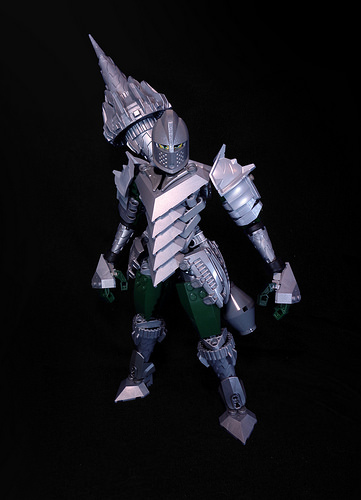