The Brothers Brick enjoyed LEGO Space: Building The Future — the book of wonderful sci-fi creations from rockstar Space builders Tim Goddard and Peter Reid. When the guys got in touch to say they’d penned and illustrated a new tale set in the LEGO Space universe, we got very excited. Even more so when they asked if we’d like to host the tale as exclusive downloadable content for our readers. 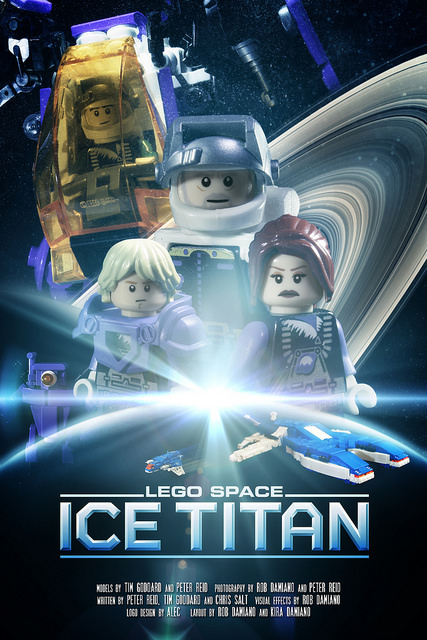 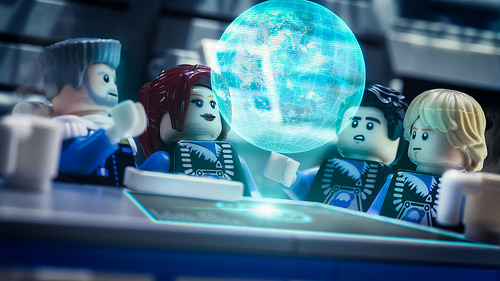 Brothers Brick: How did the new story come about?

Tim Goddard: I never imagined this would turn into such a project, and with such amazing results when it started almost a year ago. It all kicked off with a mech I built. I was pretty happy with the model, but after the build came the most fraught part, photography. I am rarely happy with the pictures I take of my models but this time I had an idea. I had recently become a fan of the photography and effects used by Rob Damiano to create his Nova Team adventures, and I wondered if he would be interested in shooted my Ice Planet mech. Over a few weeks, and many emails, the idea developed into creating an adventure rather than just shooting a nice picture or two. I wrote a story and we honed it to create something that would work well with Rob’s images. I created some backgrounds — ice cliffs and plateaus — and threw in some of my original ICE figures used in LEGO Space: Building The Future.

TBB: How did you find working together?

Tim: Rob was brilliant and started getting some great images almost straight away. They were amazing — better than anything I could have hoped for. He played around with lighting and in-shot and post-production snow effects. He really brought everything to life.
Rob Damiano: I think it would be an understatement if I said I was excited with the chance to work with guys like Tim and Peter. Here they are, legends in our community, wanting to work with me. How cool is that!?

TBB: So how did the wider team get involved?

Tim: Rob and I had planned to publish a series of pictures on Flickr along with a section of story over a few weeks. But it became clear this was evolving into a new LEGO Space book chapter. To make sure we met the high standards we’d set in the book there was only one man to call on, my co-creator and writer Peter Reid. Happily he was up for the challenge and took the story in hand, refining and improving it with input from book collaborator Chris Salt. 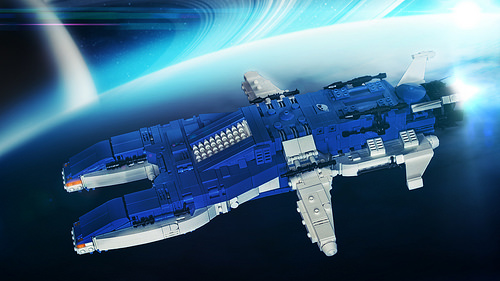 Tim: Over weeks and months it slowly came together. The gaping ocean between the members of the team was a bit of a challenge. But when the need for more models arose, Pete and myself did some building and took the pictures on this side of the Atlantic for Rob to process. Rob did some building of his own too.
Rob: The guys liked the cinematic style that I’ve become known for, but I didn’t want this to just look like Nova Team. How was I going to make ICE Titan look different, give it its own visual language? The answer was snow — or more specifically cornstarch, and lots of it! It was a technique I hadn’t used before, but is widely used by macro photographers for this sort of look. At the time, I hoped the mixture of cornstarch snow and Tim’s brick-built terrain would provide a unique look. Ironically, months after my photography The LEGO Batman Movie did exactly the same — mix “real” snow with LEGO snow. I guess we were in good company!

Tim: As the project progressed, I spoke with Alec Hole, another Classic Space builder, who lent his expert design skills to creating a logo in a specially-designed font, inspired by the Ice Planet theme. And Rob’s partner, Kira, did some great work bringing everything together with the layout.

TBB: So the whole thing ended up as a major collaborative effort?

Tim: Absolutely. Very much a team creation.
Rob: The road was long, but boy was it so worth it. It was an honor to work with these guys and I look forward to our next adventure together.

Tim: Finally yes! As we got closer to completion we starting thinking we needed somewhere to show it off. We thought, what is the best way to get the maximum number of people who might appreciate our work to see it? Well, the answer was obvious really — so here we are! I hope you and all the readers of the Brothers Brick enjoy it.

TBB: We’re delighted to be able to host the download for you guys. I’m sure our readers will love the story, the models, and the cool photography. And thanks for taking the time to talk to us about the story’s creation.