The Brothers Brick were fortunate enough to spend some time talking with LEGO Designer Jens Kronvold Frederiksen who is the Design director for Star Wars theme, and Jakob who is a LEGO graphic designer within the Star Wars theme. Jens has designed sets for the Star Wars theme for 18 out of the 19 years he has been working for LEGO—an unusual situation, he admits, but one he is very happy with. Right at the beginning back in 1998, when Jens heard that LEGO and Star Wars were going to be collaborating, he felt it was a perfect combination of a fantasy universe with sets and vehicles that would work well with LEGO along with a strong storyline about good versus evil. 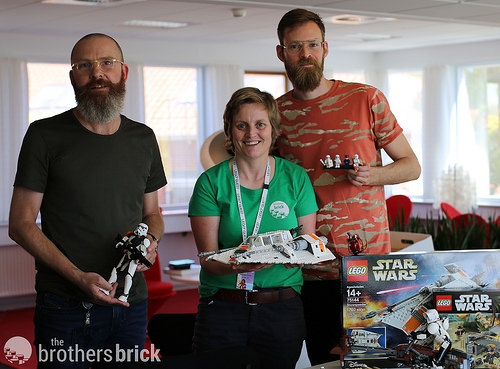 Jens Kronvold Frederiksen is famous for designing the UCS Millenium Falcon, a product he created back in 2006. Designing the biggest LEGO set at that time under the Star Wars theme was very exciting for him. It is no wonder it remains on his short list of favourite sets, along with the Death Star, which is a set he considers a ‘family build’ (when an adult can help a younger fan to build a complex final creation). He has a hand in lots of sets now as Design Director, but explains that although he oversees the designs, he can’t help but continue to build and get involved with the model designers. 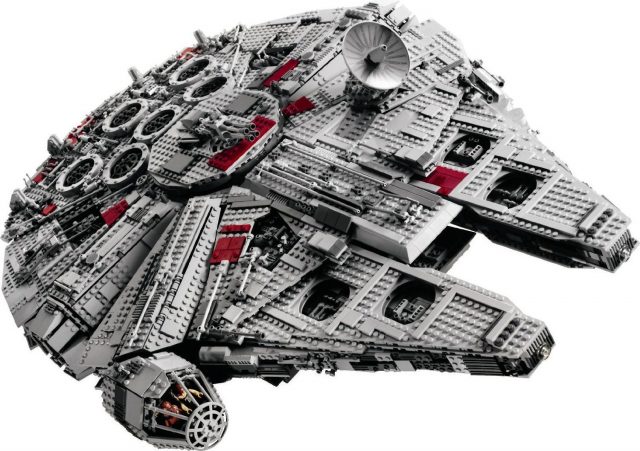 TBB: Thinking about the most recent Star Wars movie, how early in the production of a new show or movie do you get involved? Do you have a chance to see concept art or visit movie sets?

Jens: It is not easy to build sets for a movie that we have not seen, but we had concept art and designs more than a year before which allowed us to plan and design. It is easy for a design to be changed by the people working on a movie if the design is CGI, and it would take a lot longer for us to redesign a set that was already in production. We are always asking for pictures and images to build from as early as possible. We knew the basic storyline of the new Star Wars movies but we had not seen footage from the movie itself.
Jakob: We were fortunate to have the chance to go and visit movie sets for The Force Awakens and see some of the set designs and vehicle designs. This was very exciting, but is a very different way of working compared to the job that we do with designing and creating LEGO sets from the movie.

TBB: How do you decide what themes to re-feature versus creating new scenes? (eg. the Darth Vader Transformation was a set in 2005 and now it features again in 2015.) What’s the thought and planning process behind these creations? 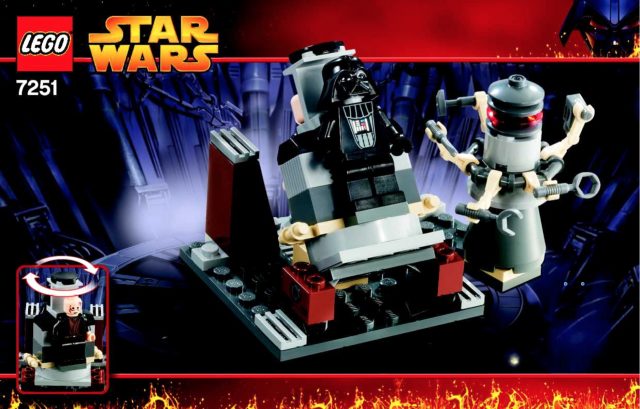 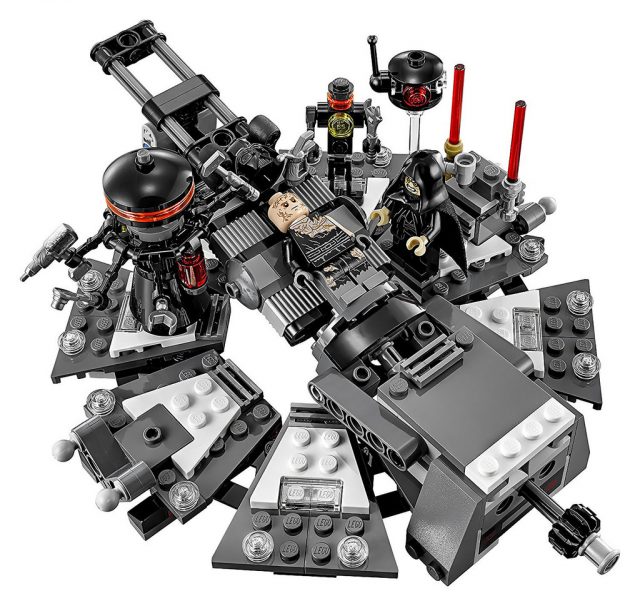 Jens: When we redesign a scene, we start at the beginning again rather than redesigning. If a key scene is important, then sometimes we have new elements or new techniques that mean it can be improved. A redesigned set lets us go back and make it better, sometimes this is a good thing and a new set can be produced. Iconic scenes are also good as they will be well known and popular, but we have to make sure that the scene works for a LEGO set and can be played with and enjoyed.

TBB: Fans know that sometimes designers don’t quite get designs accurate; for example, Kylo Ren’s command shuttle wing issue. Is this because you only get to see sketch work to derive sets from when the movie is kept confidential?

Jens: Yes, it was disappointing when we designed Kylo Ren’s command shuttle from the concept art, and the function of the wings was not as clear; but later once the set was produced, the different outward movement was shown. At that point, the set was already in production, but we see the wings as being a fun play feature. People who buy the set can modify it and improve on the model once they have seen the movie, and that is a good thing too. The wing function was not clear from the images we were given, and this is why there is a difference in the set and the movie.

An example of working with the original set and the modifying it can be seen in the video below by Jangbricks, who not only opted for black parts but also modified the wings to allow outward in addition to the original folding downwards movement.

TBB: I have to ask you about stickers, since the Ultimate Collector’s Series 75144 Snowspeeder is sitting in front of us. What is your own feeling about the use of stickers rather than printed parts, especially on a UCS set like this? 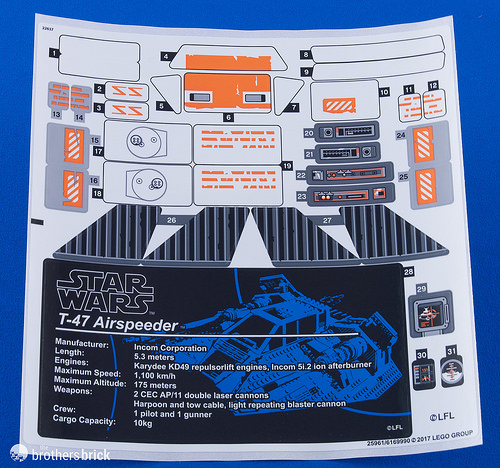 Jakob: The stickers are designed to give added detail that enhances the set. It is not always possible to print onto parts, as then each part would become a new element. But the stickers mean that the detail can be added without restricting that part to a single use. We find that children are often better than adults at applying small stickers, but struggle with the larger sticker due to the size.

Jens: I think that stickers increase playability, as you may not apply them and leave pieces clean, and then the parts can be used for other creations. This is good for children who may want to apply certain stickers, or often prefer to play with the parts. In addition, we have a strong rule of “1 piece = 1 sticker”. This means we would not have stickers that are applied on two or three interlocked bricks, as this is very restrictive and not something we would want in a set. (We call this a STAMP -ed.)

TBB: Which is harder: looking at a Star Wars ship and thinking about how to make it into a LEGO set, or making something from scratch?

Jens: There are advantages and disadvantages to both of these methods of designing a set. For the sets that are tied to a movie, when we have images, the challenges are often greater as we try to build something that was not designed with LEGO in mind. The advantage of designing a set from scratch is that playability and enjoyment of the build process and design can be our focus, as the set will be designed with this priority. 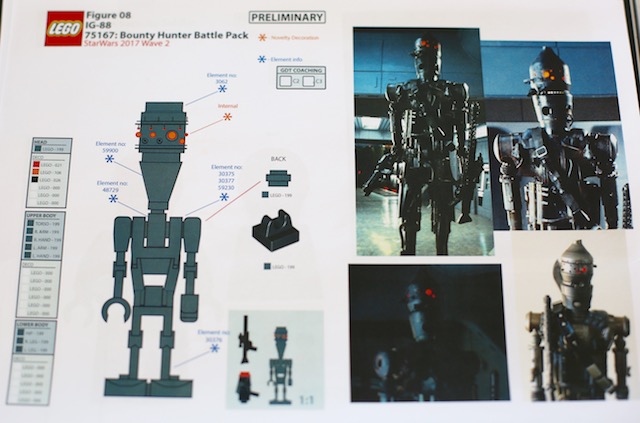 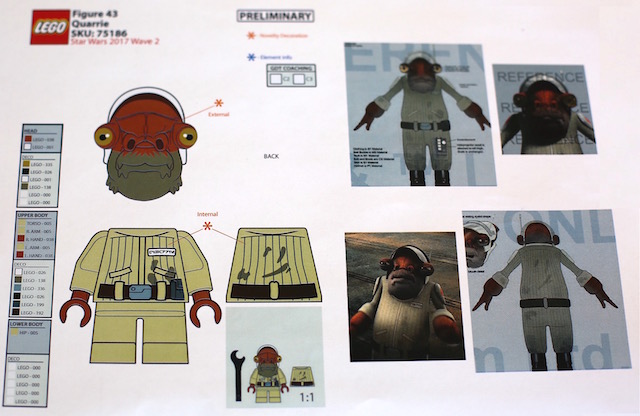 TBB: Do you tend to build digitally, or ‘in the brick’ when designing a new set?

Jens: Most designers tend to build using bricks initially. Once a part of the build is complete, it is sometimes easier to transfer this to a digital build as colours can be changed very easily without taking the build apart each time. Often other designers will come over and look at partly built sets or areas where we are tackling a challenge. For example, the design for the mechanism to raise and lower the upper airbrake flaps by turning the engine nacelles in the UCS Snowspeeder was actually another designer who looked at the area and then offered a solution. 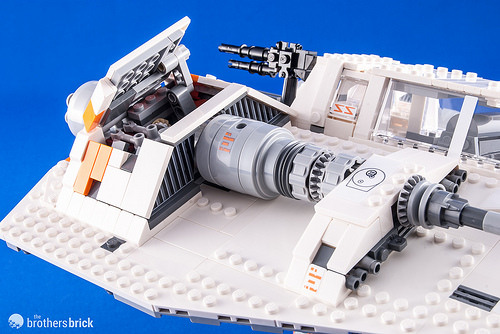 TBB: Since you mentioned the upper airbrake flaps, when TBB was reviewing the UCS Snowspeeder, Chris felt that there had been a missed opportunity, as he kept expecting a cheese slope to be placed on the engine housing to finish the slopes. It’s missing on both the inner and outer sides of the housing, and seems a glaring oversight. The outer one is missing intentionally, because it would interfere with the flap opening mechanism, but there’s no similar issues for the inner one. 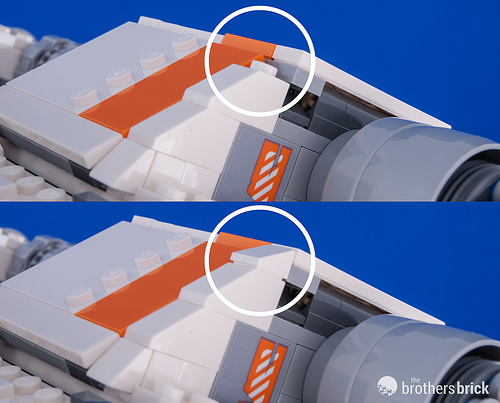 Jens: [fetching a cheese slope from another set in front of him and trying it out on both the inner and outer sides of the housing] We did try this, and on the outer slope, it [the cheese slope] would flick off when the flap was opened. If we had put a 1×1 slope on the inner then it would have looked unbalanced, as the other side would then look like it was missing a piece. We felt it was better to be symmetrical and balanced than having this just on one side. We tried many different ways, and we feel we chose the best design.

TBB: What is the one thing you want to create, but haven’t been able to or not authorised to do so?

Jens: There are lots of builds that all my LEGO model builders make that are not currently made into a set. This is often because the time is not right, but the builds are not rejected, simply set aside and then they can be looked at again at a later time. It is not so much about not being able to create a particular vehicle or set, but we have to consider our priority of creating fun, enjoyable building experiences for children and this is always our first consideration.

TBB: If someone had not seen the Star Wars movies or built the sets, what advice can you offer?

Jens: In terms of sets, I would recommend that you start with a UCS set. The current UCS Snowspeeder would be a good choice as it is available, or one of the older UCS models would be good too. The reason is that they are big enjoyable builds that capture the Star Wars theme, and I think they are fun to build and look good.

It was clear that Jens is far too experienced at keeping secrets to let any leaks out about forthcoming sets, but he did say that there were always lots of new ideas and definitely more Star Wars sets planned. Sadly we will all have to wait and see what comes next as there were no hints given. Thanks to Jens and Jakob for taking time out of their LEGO design work schedule to chat with The Brothers Brick!