The LEGO Minecraft world just got a whole lot bigger. Today LEGO has announced the largest set yet for the minifigure-scale theme, 21137 The Mountain Cave. Coming in at a staggering 2,863 pieces and a retail price of $249.99 when it arrives July 1, young Minecraft fans had better hope Grandma has deep pockets if they put this on the wishlist (though the set does also hit the highest age target in the Minecraft theme at 12+). This is the second large exclusive for the Minecraft theme, following last year’s 21128 The Village. 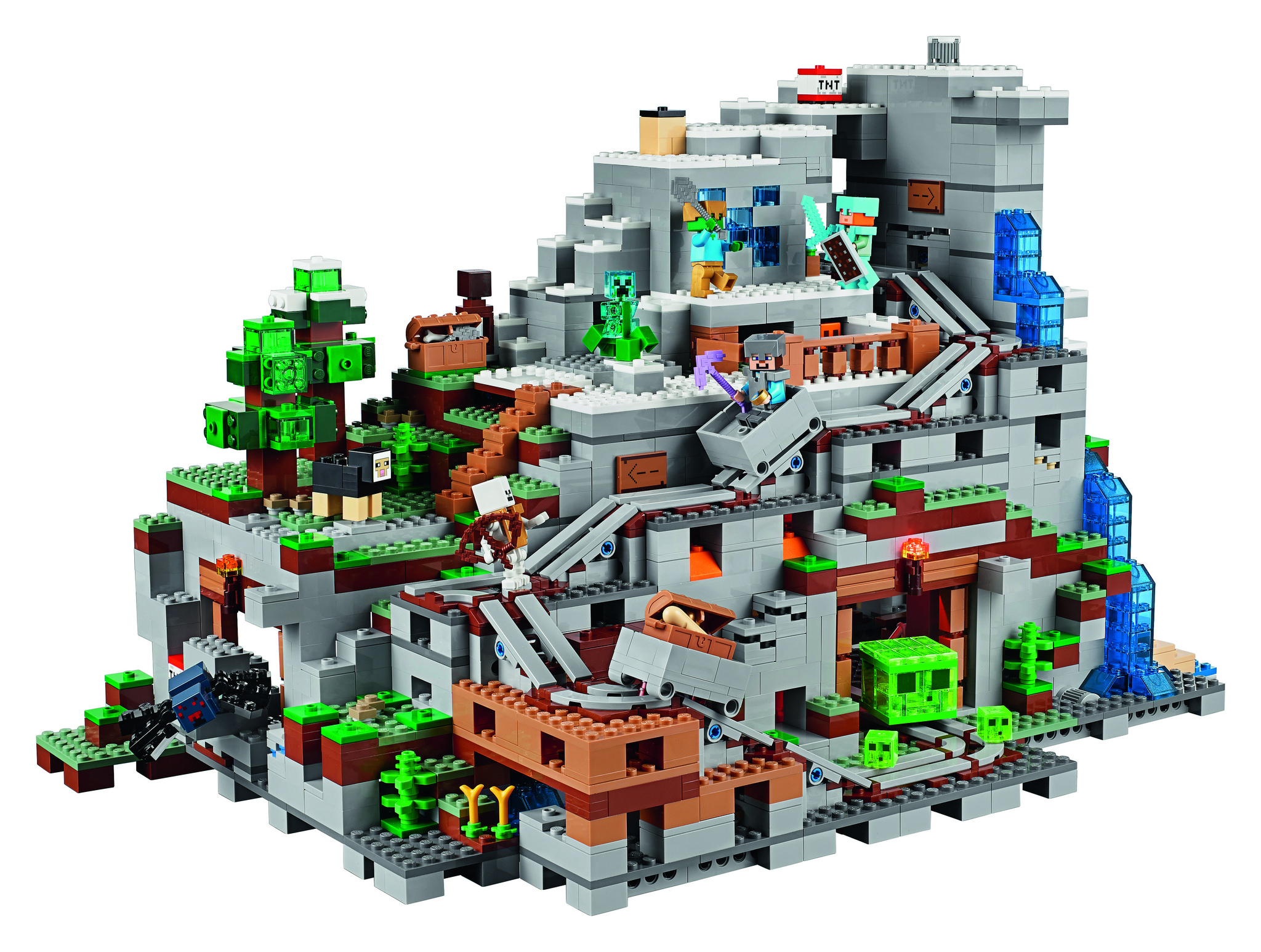 As the name implies, the set features a sizable stone mountain (12in, or 31cm, high at the peak) that’s riddled with caves. The mountain’s footprint is 20x11in (53x29cm), and has minecart tracks, a small home, and a light brick that can be positioned to light a jack o’ lantern, lava, or several other features. The set features lots of new printed elements, along with two minifigures and 13 mobs, including some new ones such as a baby wolf, bats, a charged creeper, and a giant slime. As with other large exclusives, we expect it to be available about two weeks early for LEGO VIP members. 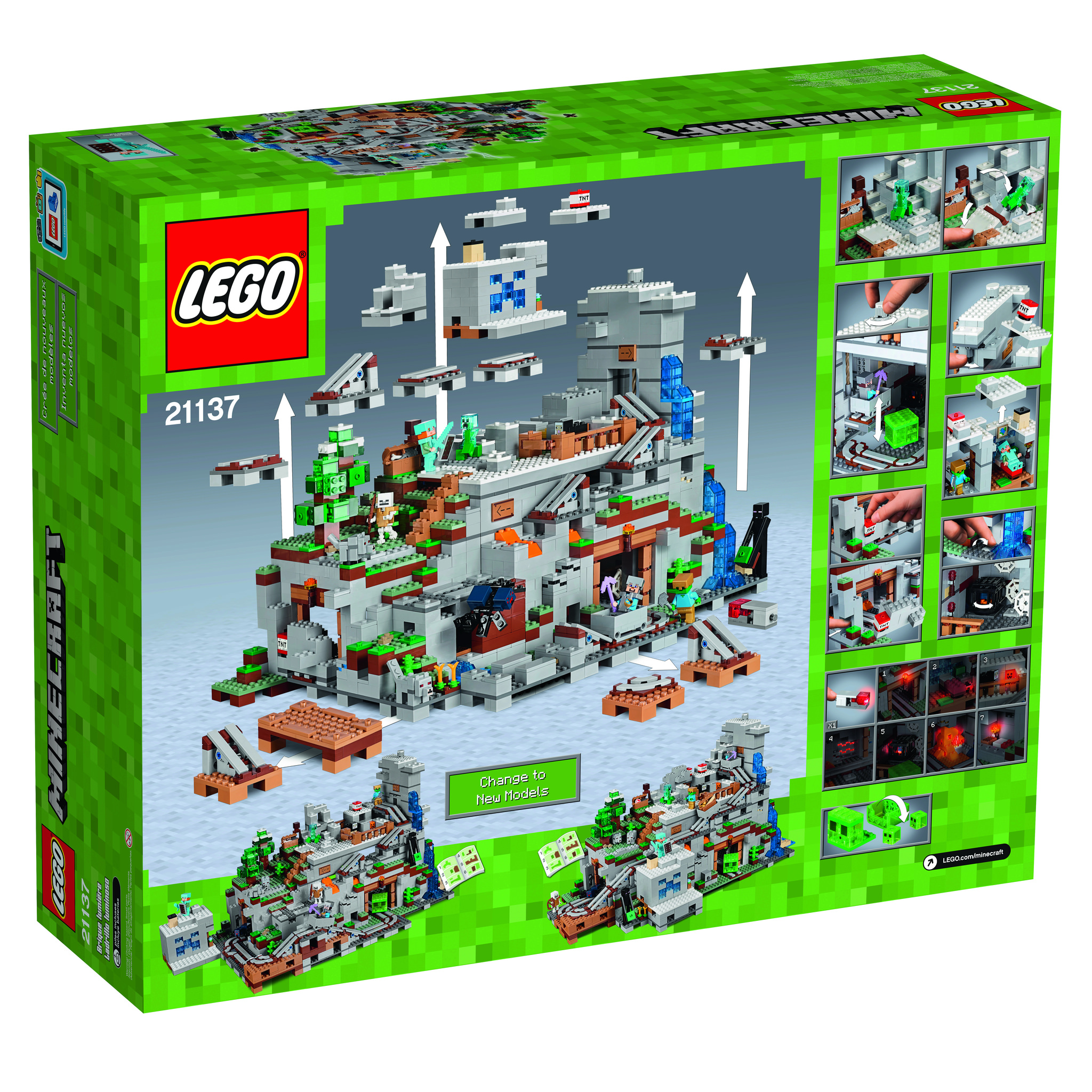 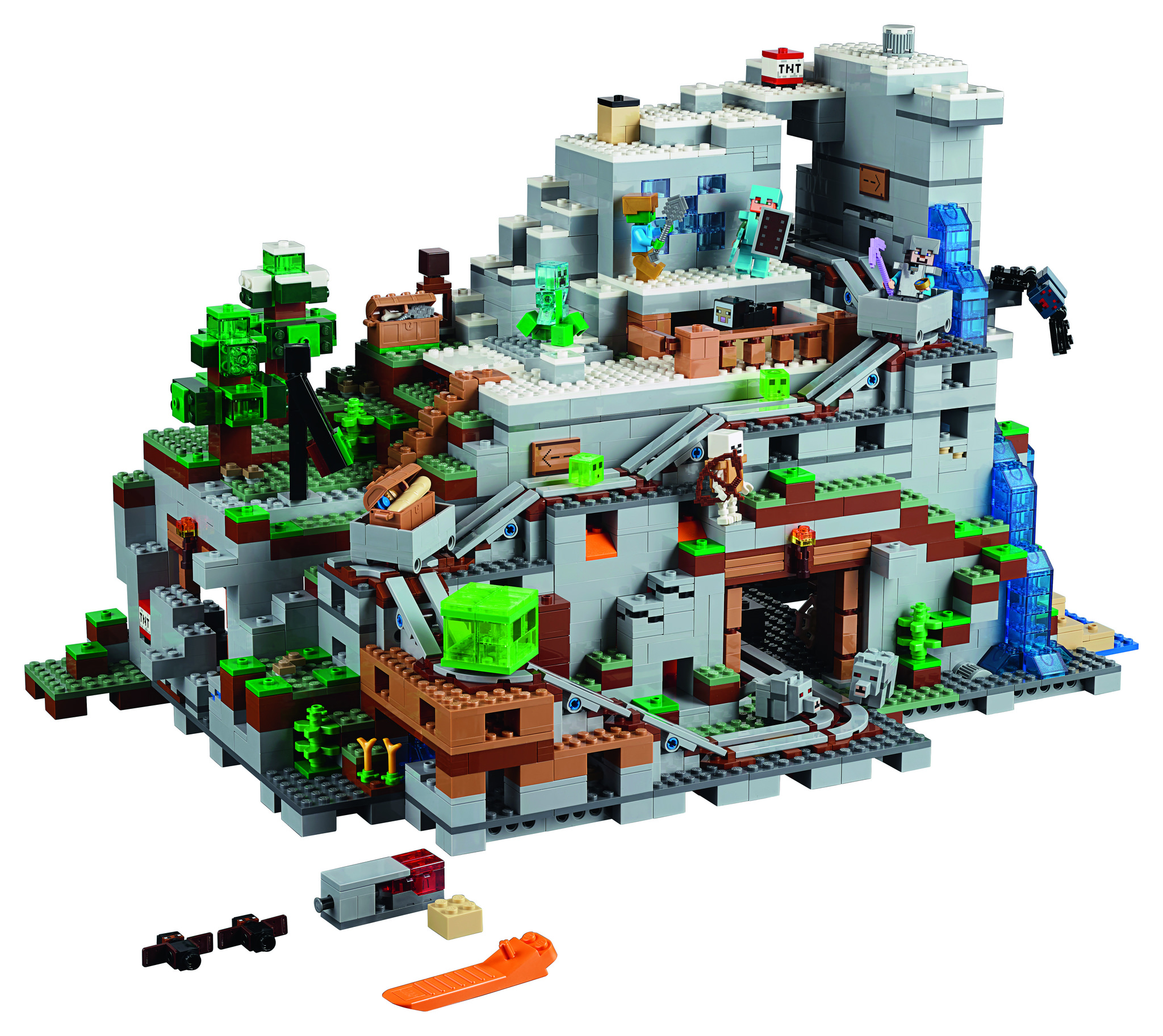 As shown on the back of the box, the various modules can be rearranged to alter the landscape. 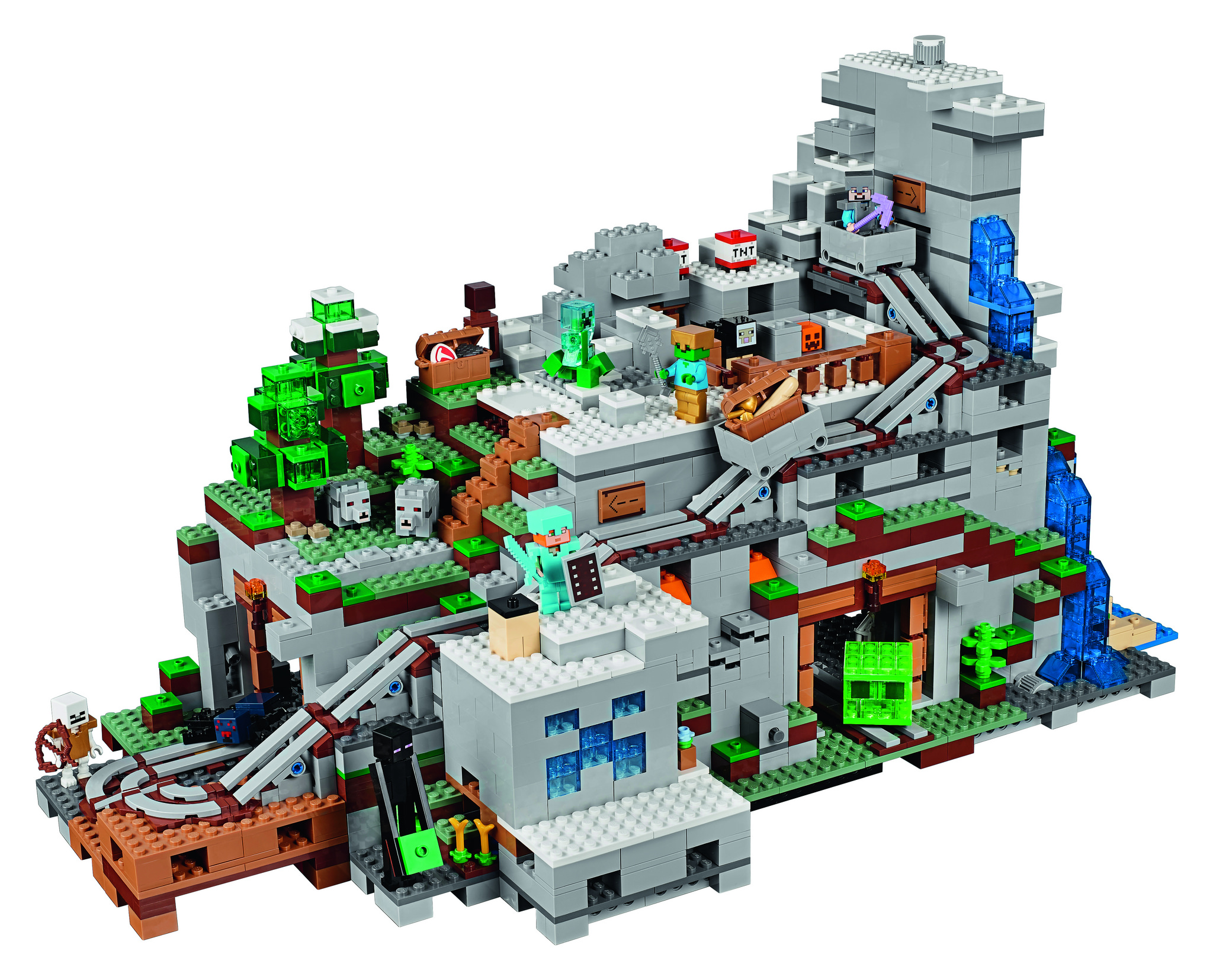 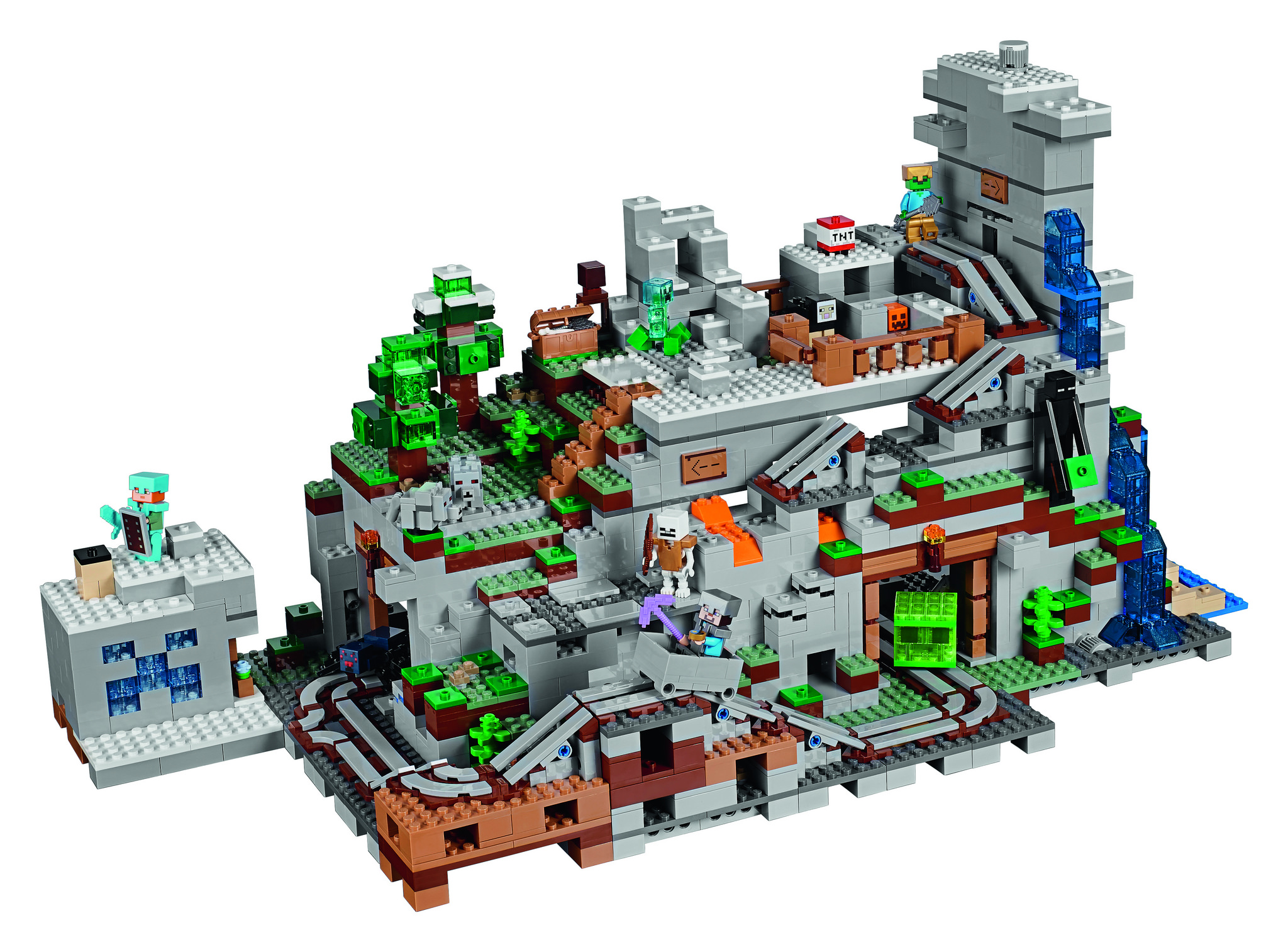 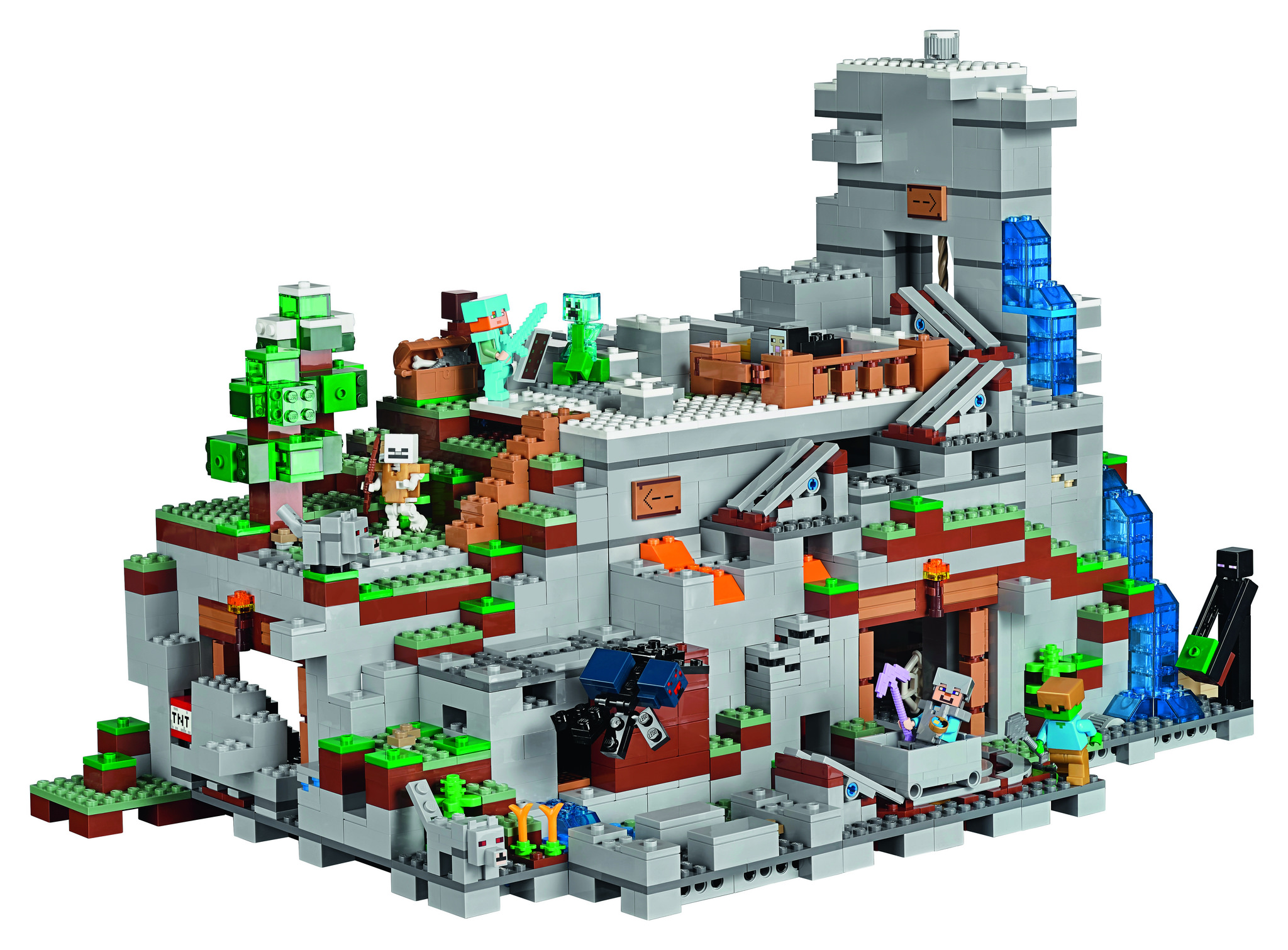 The small stone home has a creeper face made of ice blocks. 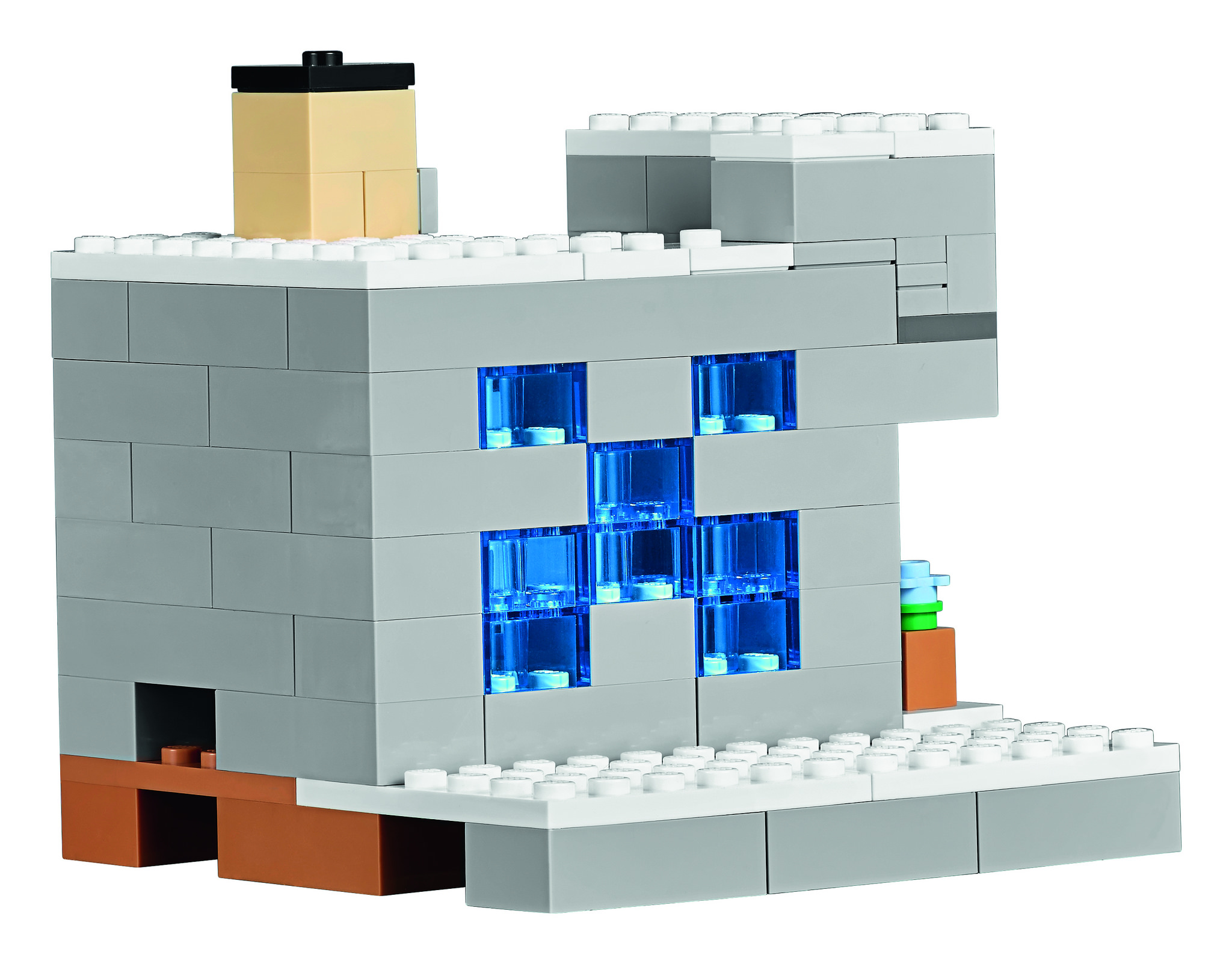 The home is equipped with a map, creeper head, bed, and oven, among other things. 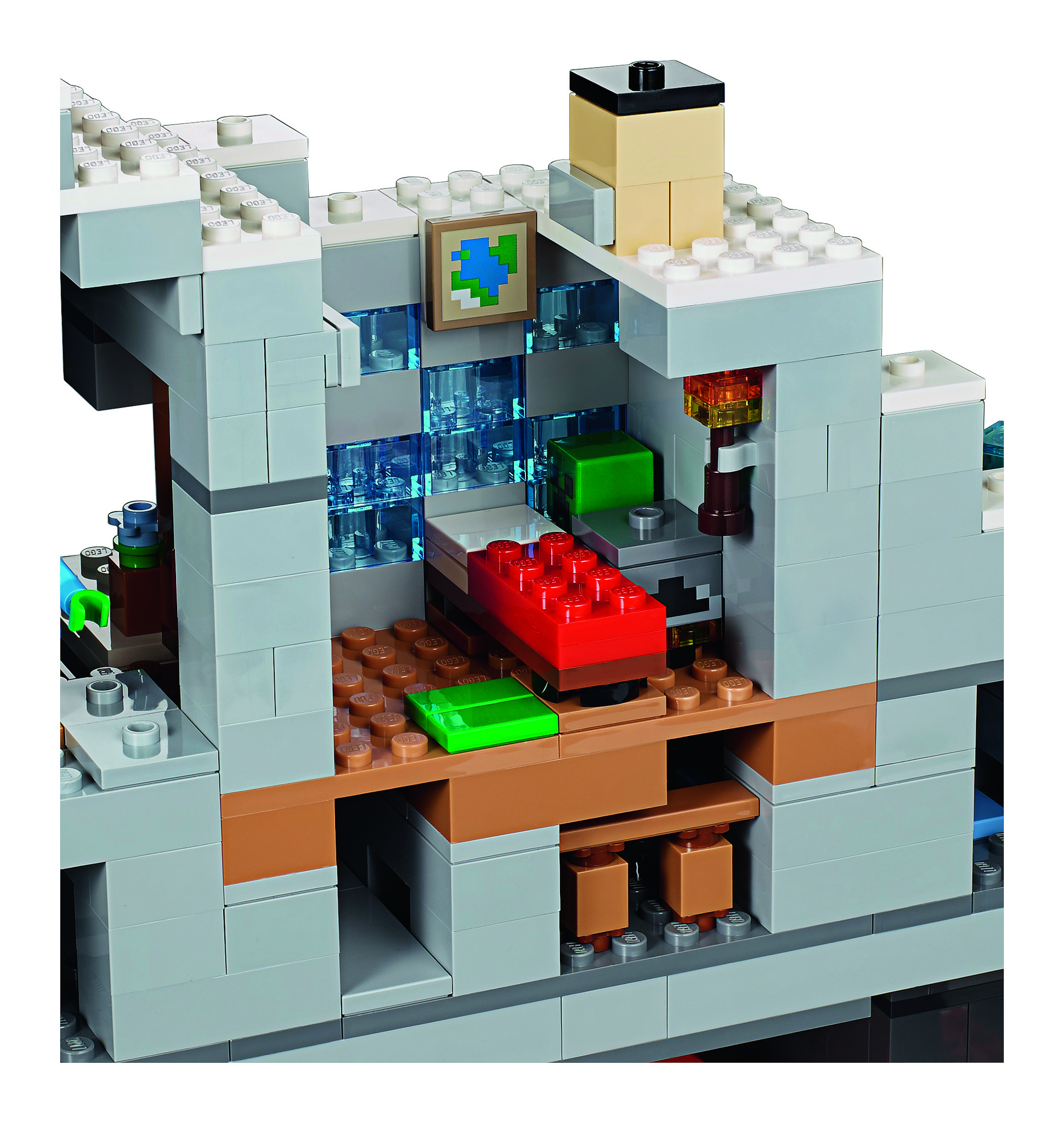 A single light brick is included. It slots into a variety of play features. Fortunately, these lights are cheap, with plenty available for a little over a $1 a piece, so it shouldn’t be too hard to get enough to light up everything at once. 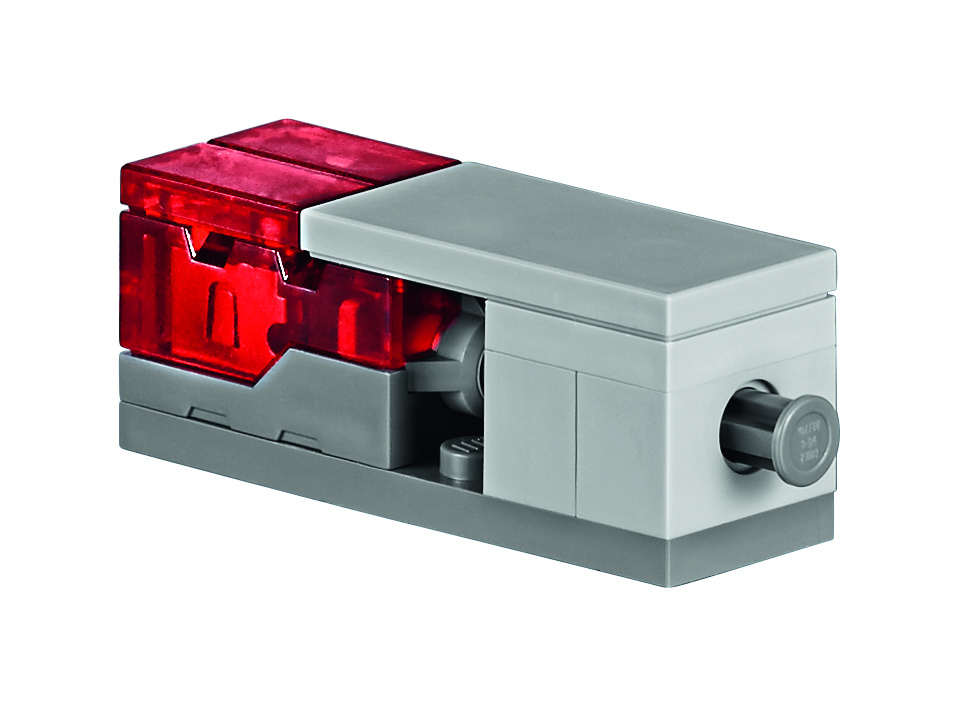 The moveable light brick can be positioned to light up the torches, such as this one in a small overnight shelter. 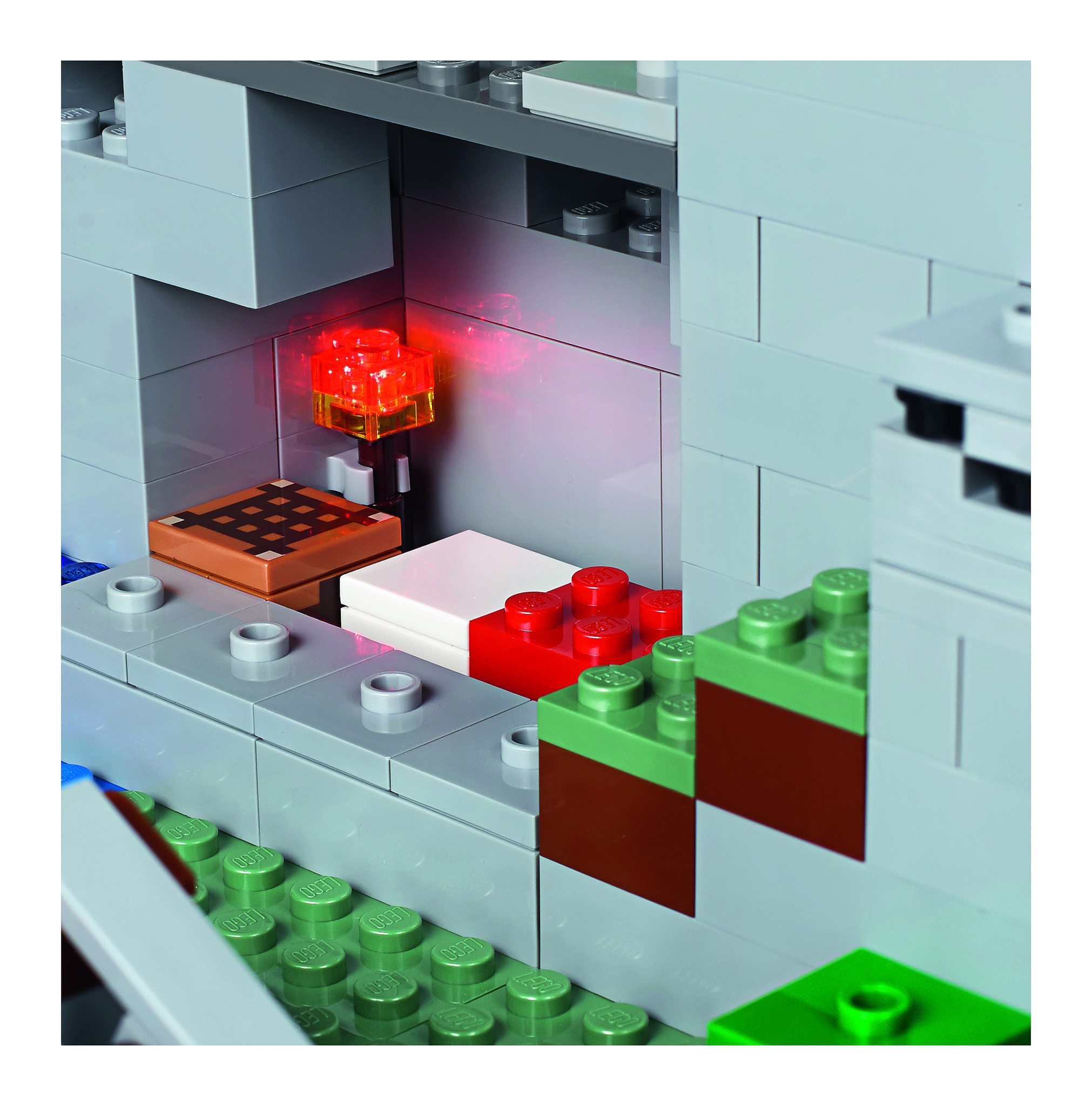 Or this one above the mine entrance. 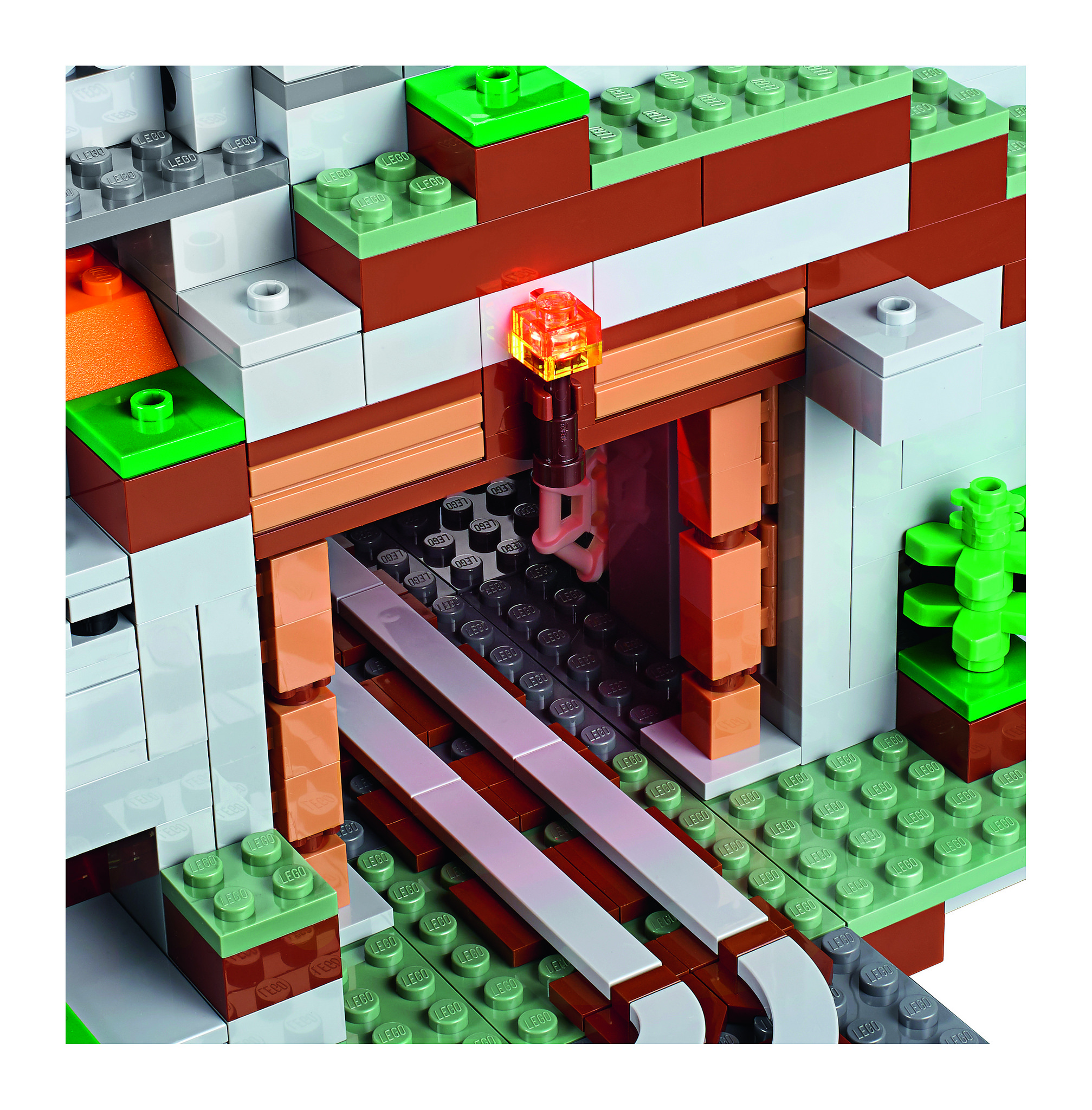 Alternatively, it can be used to make the redstone glow. 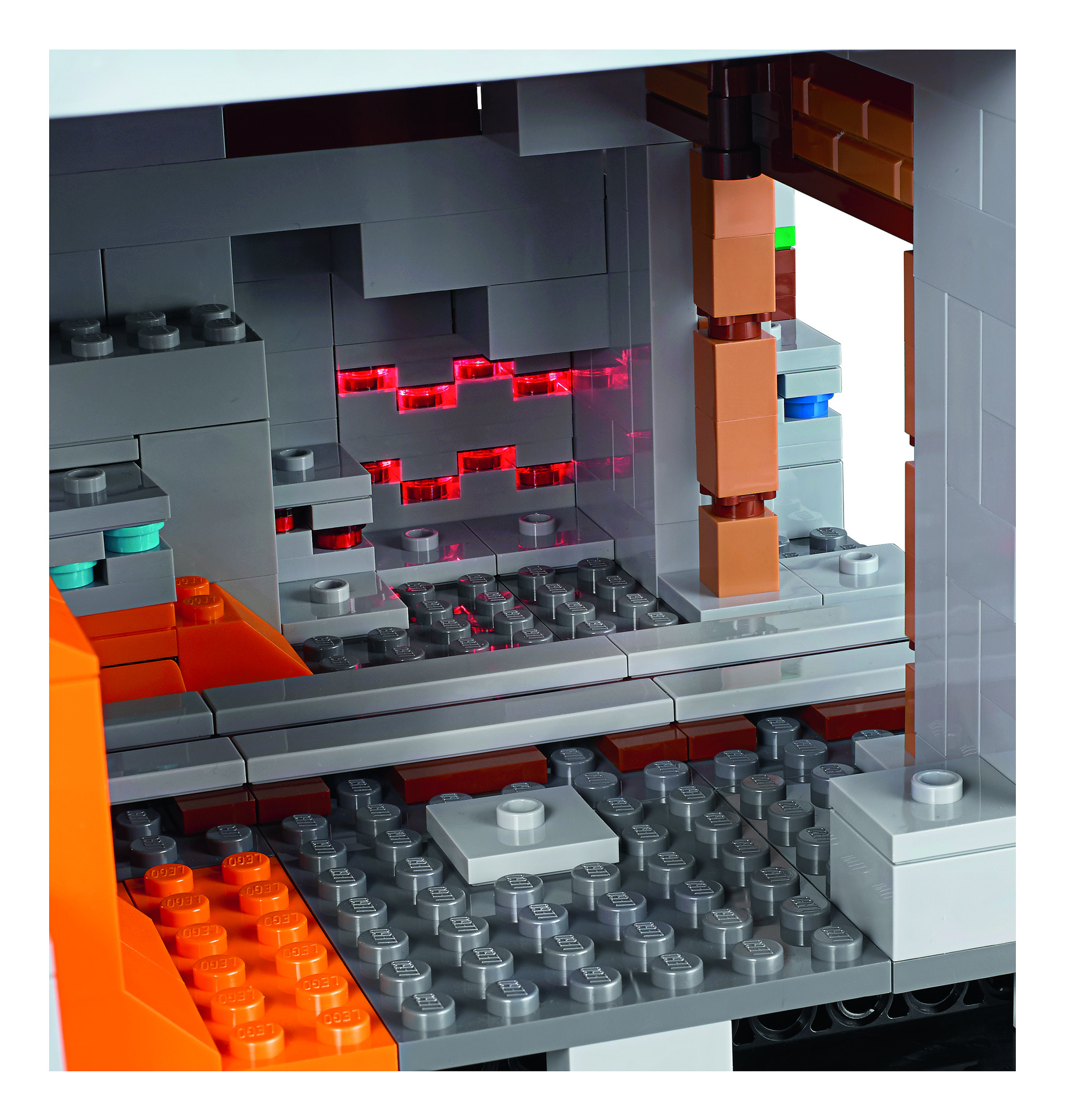 Or to give a deadly red glow to the lavafall beside the tracks. 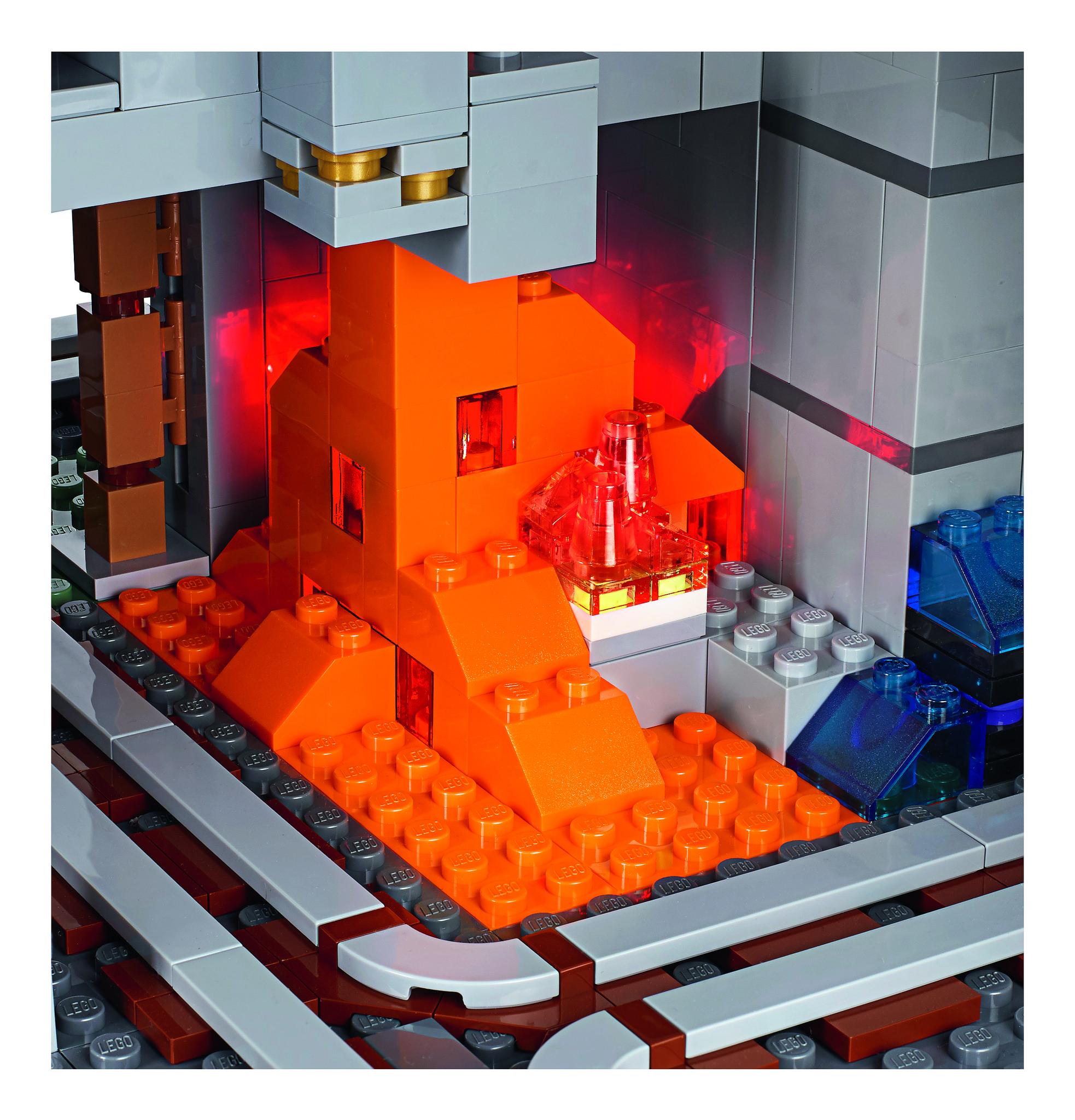 Another use for the light brick is to illuminate a good old jack o’ lantern. 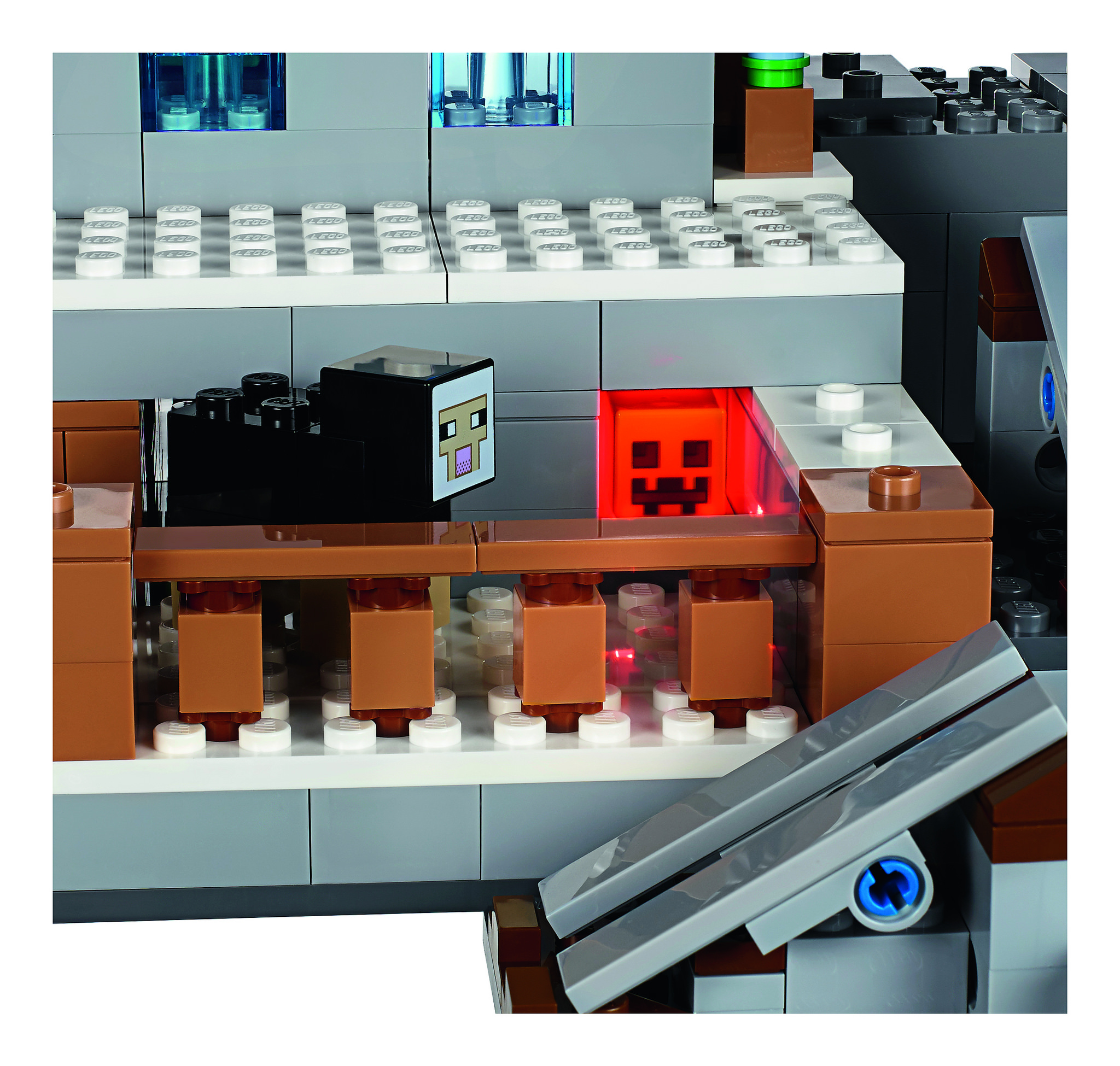 Finally, it can lend the cave spider spawner an eery glimmer. 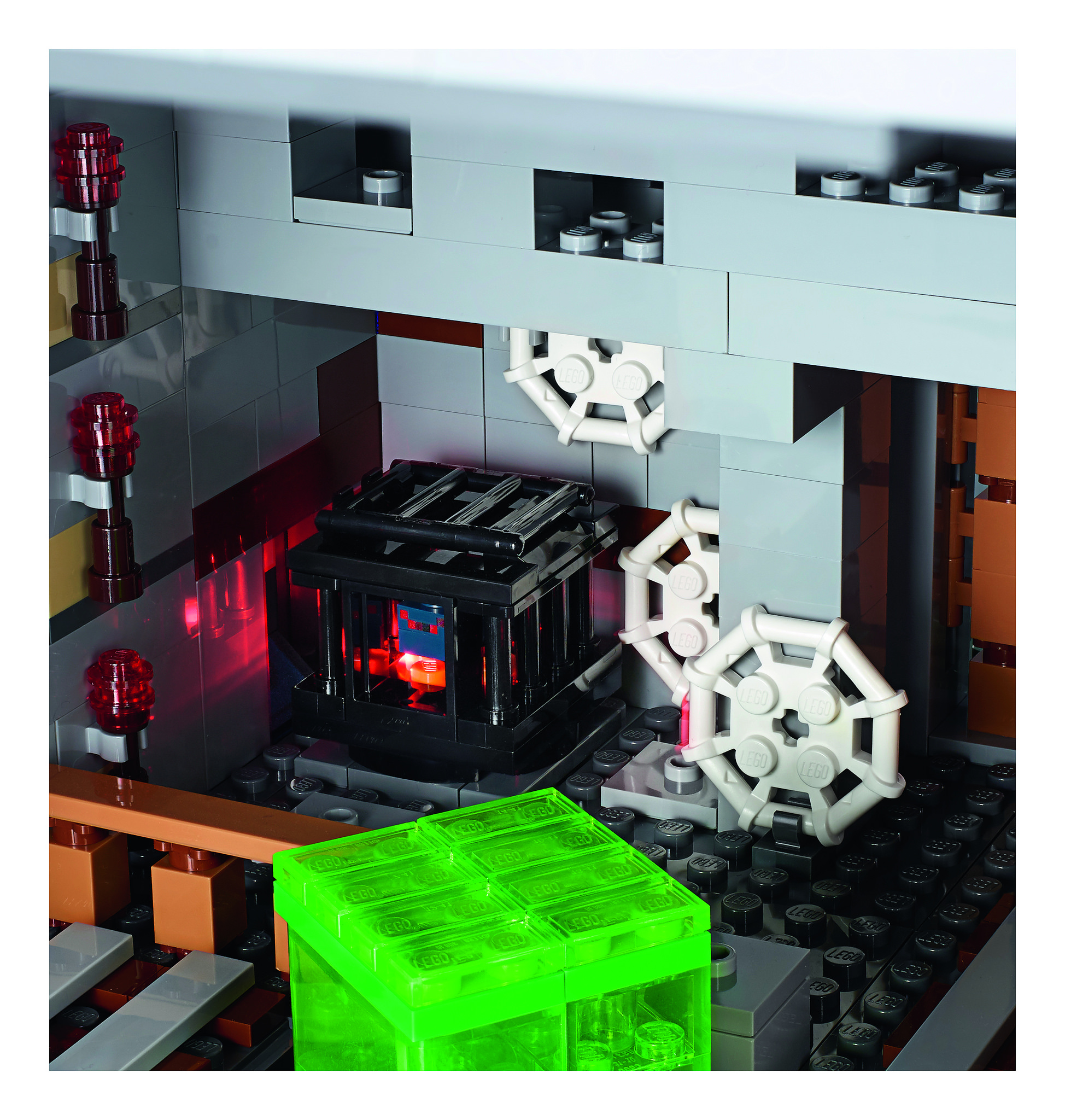 The spider inside the spawner can also spin, thanks to this dial on the mountain’s exterior. 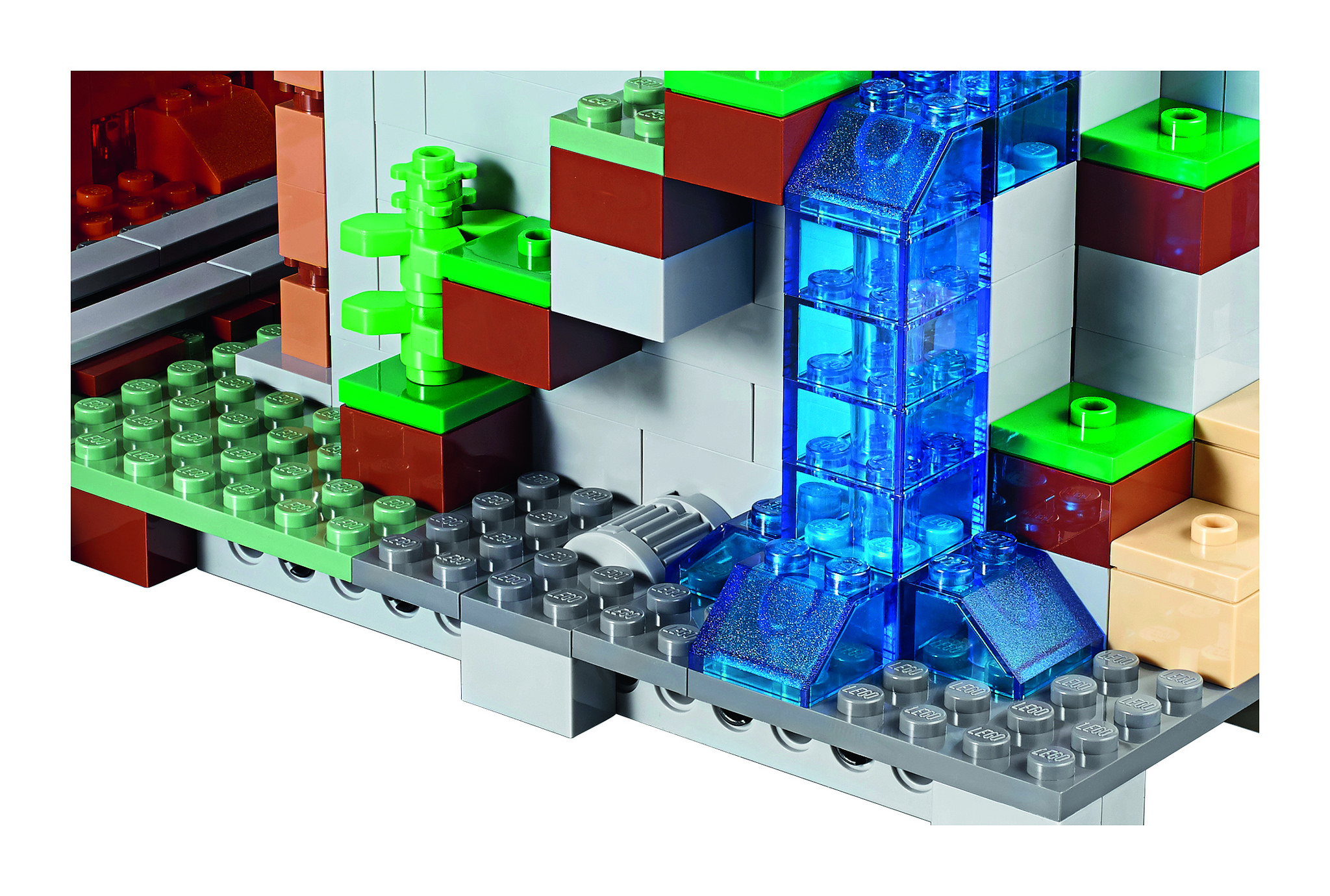 As with many Minecraft sets, a TNT block can blow a hole in a section of terrain. 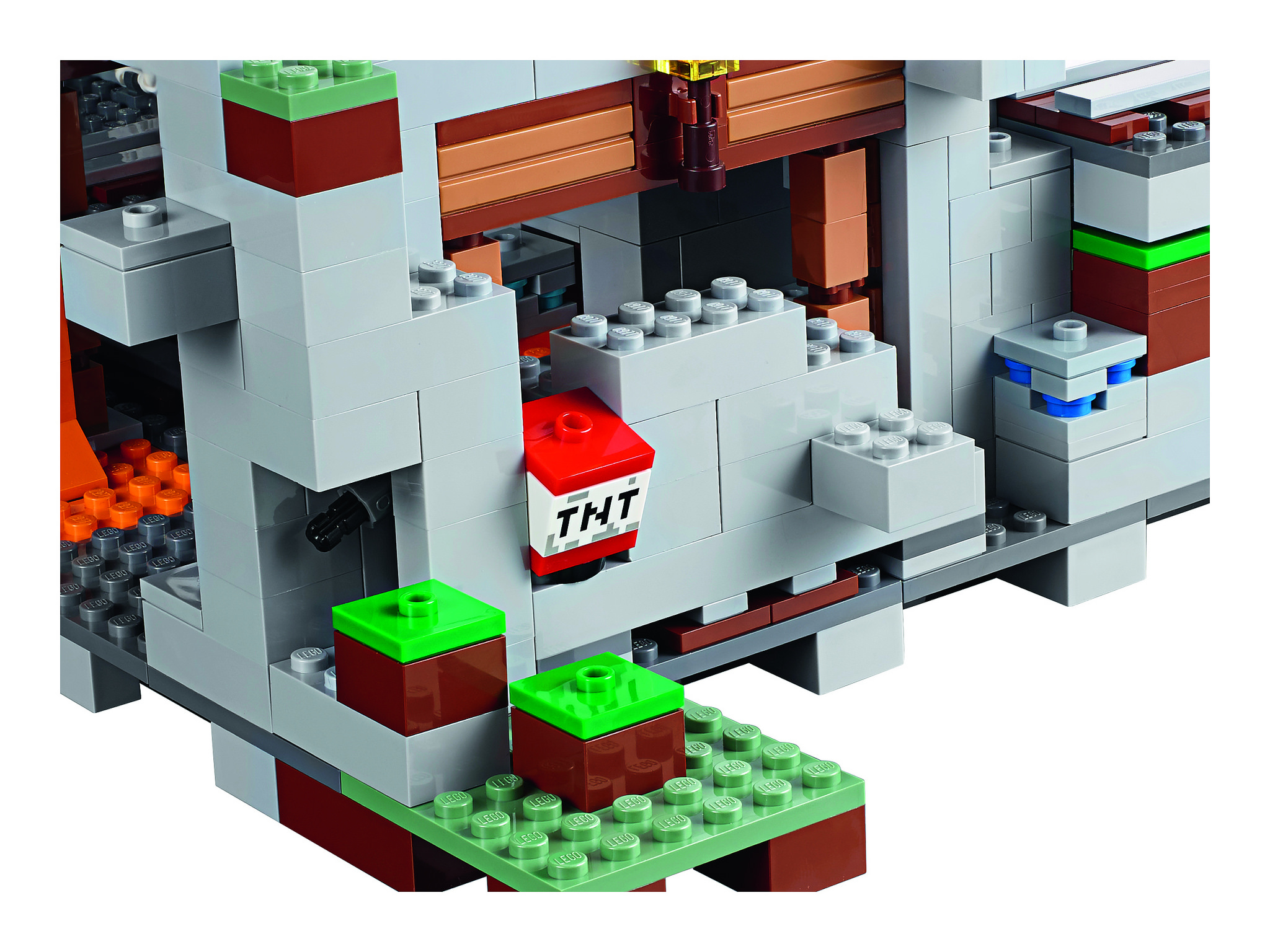 Alex gets a full set of diamond armor and a shield. The shield seems to make use of the new 2×3 tile. Meanwhile, Steve gets iron armor and an enchanted pickaxe for extra lucrative mining (or perhaps just faster mining). 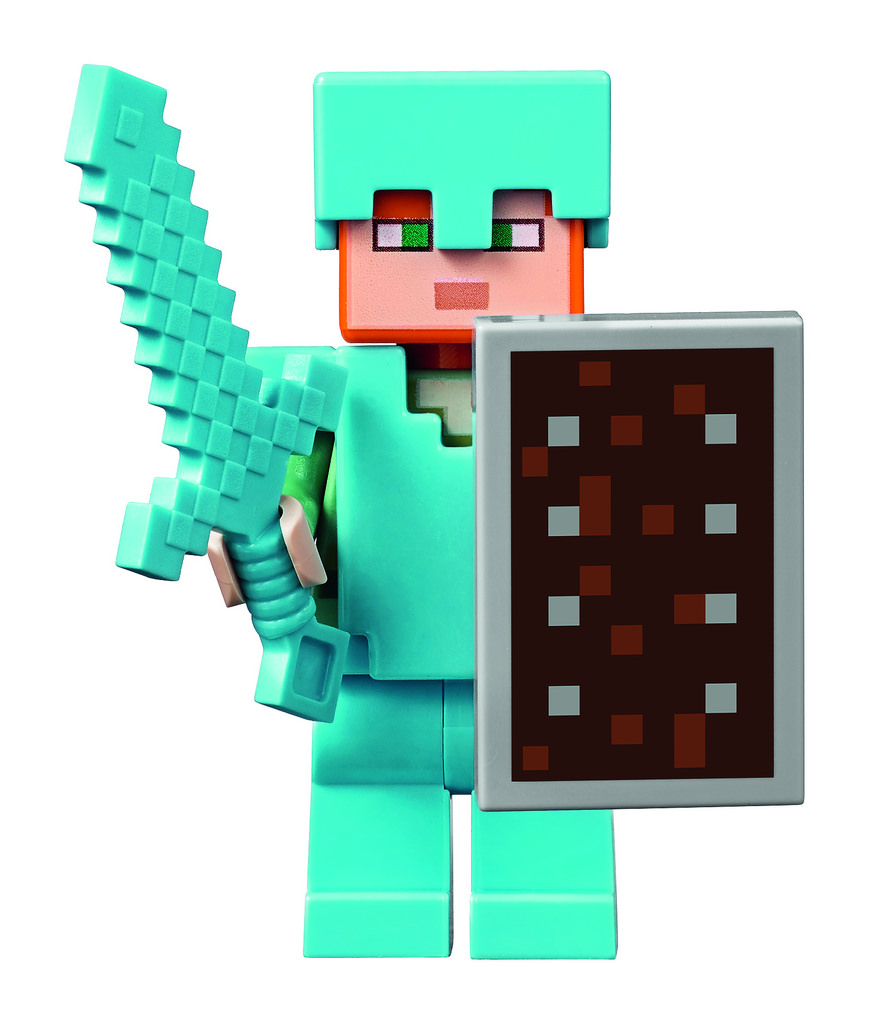 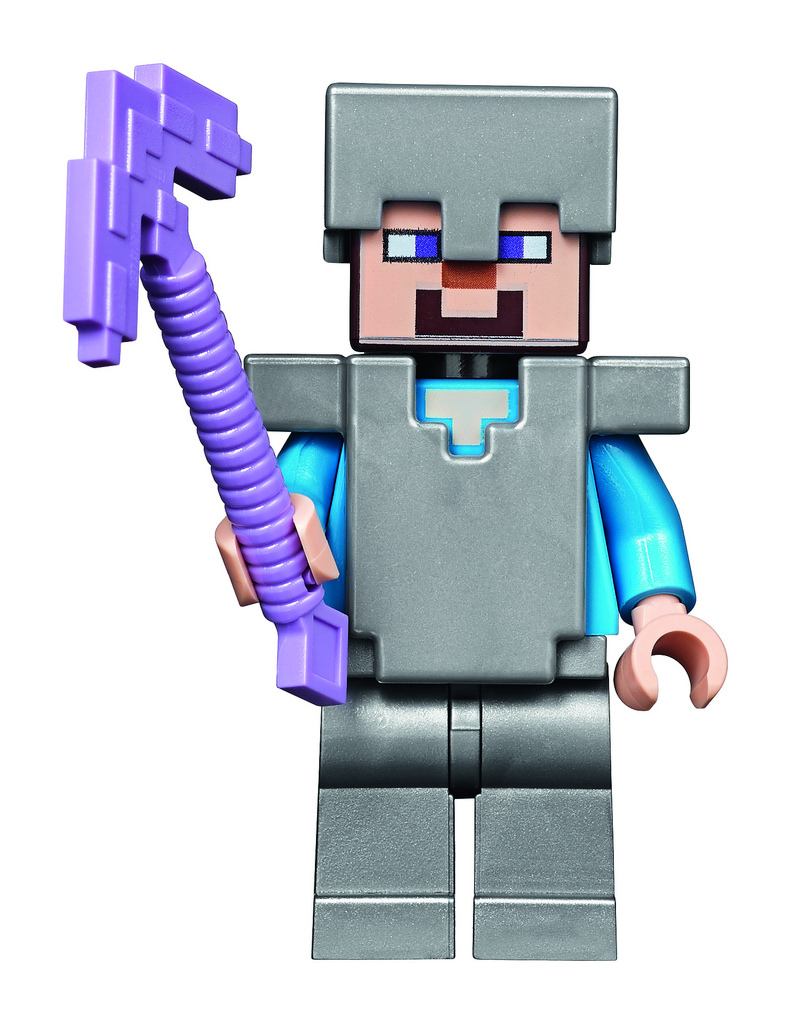 The skeleton and zombi share a set of gold armor. 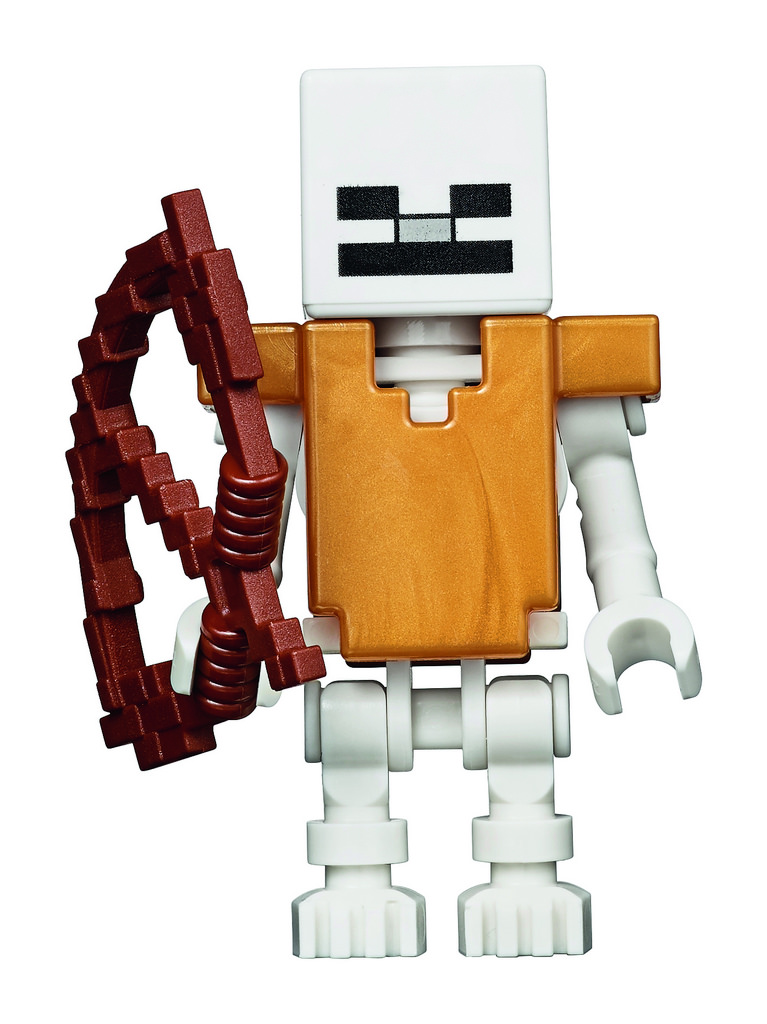 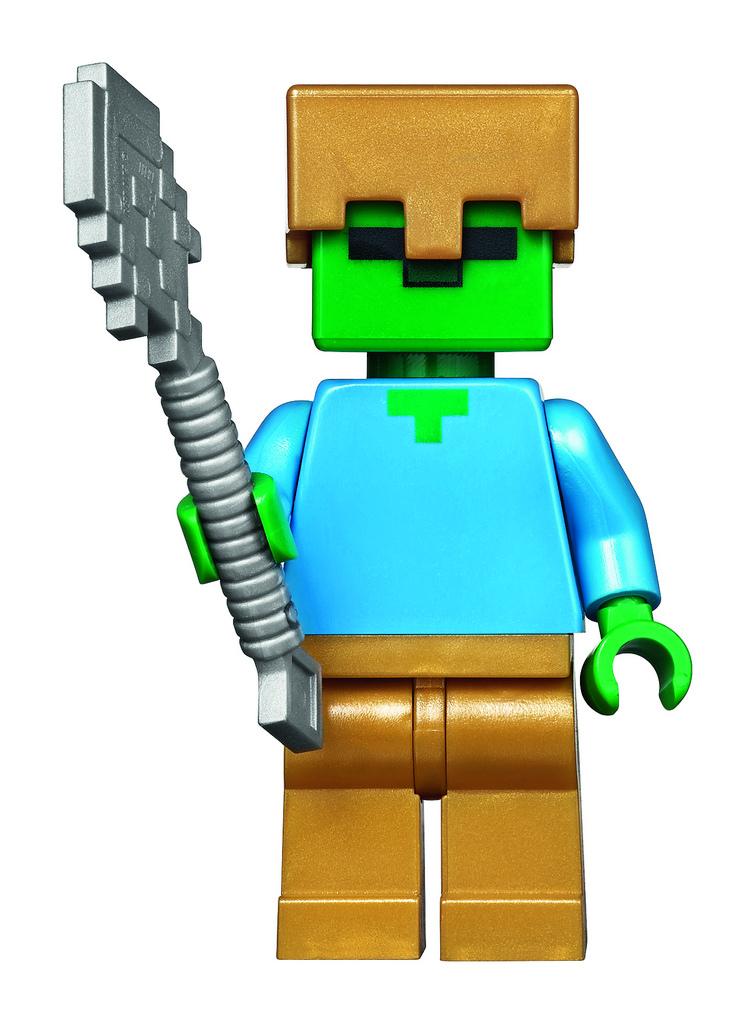 The new charged creeper is just waiting to ruin your day in an extra big way. The large 4×4-stud slime is made almost entirely of trans bright green elements, with what appear to be two printed eyes. 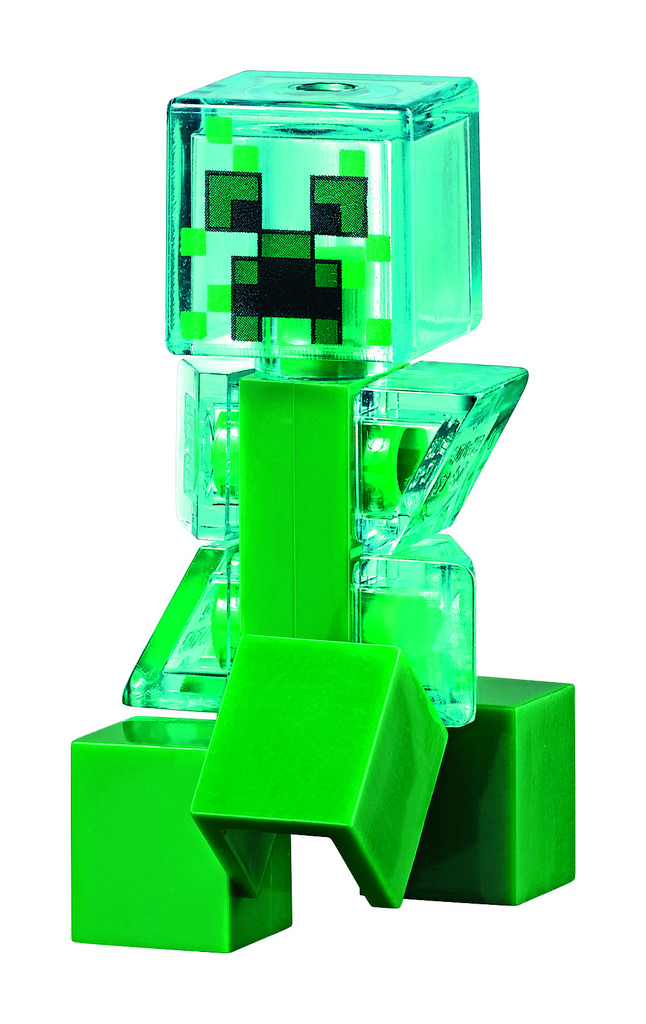 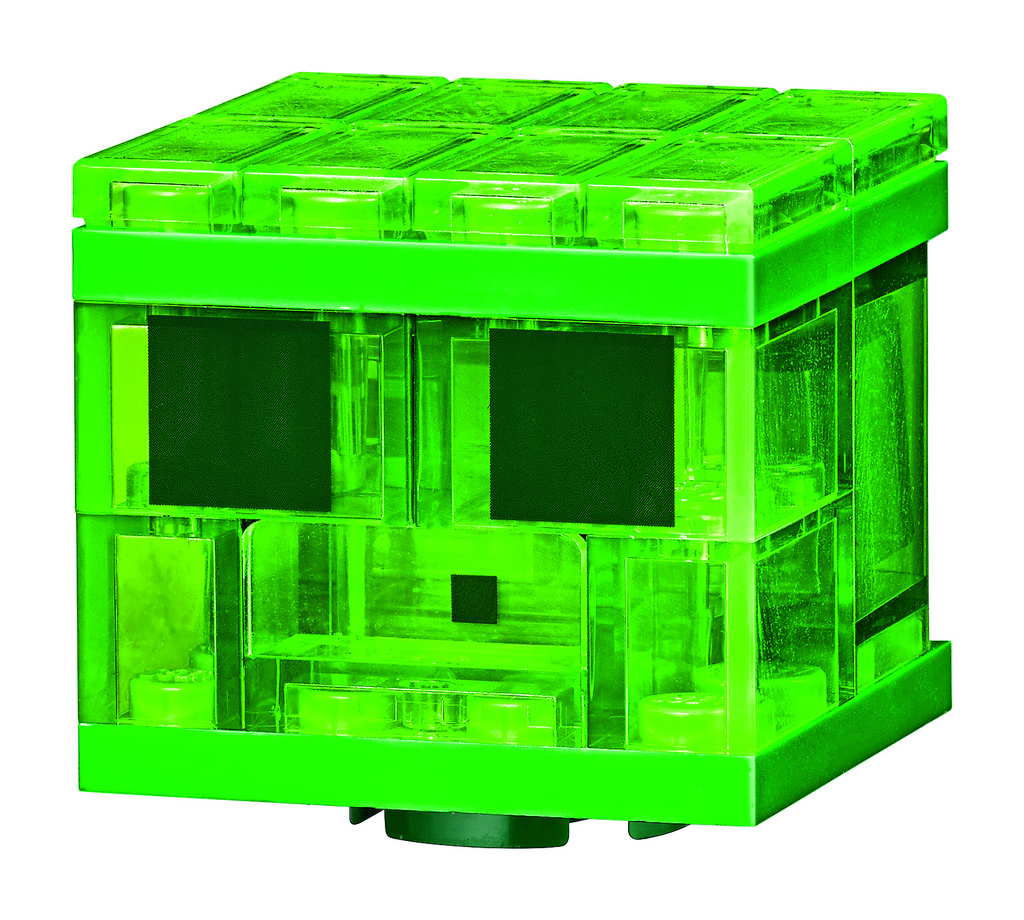 They may look cute, but both wolf and baby wolf feature the red, angry eyes that indicate they’re hostile mobs. 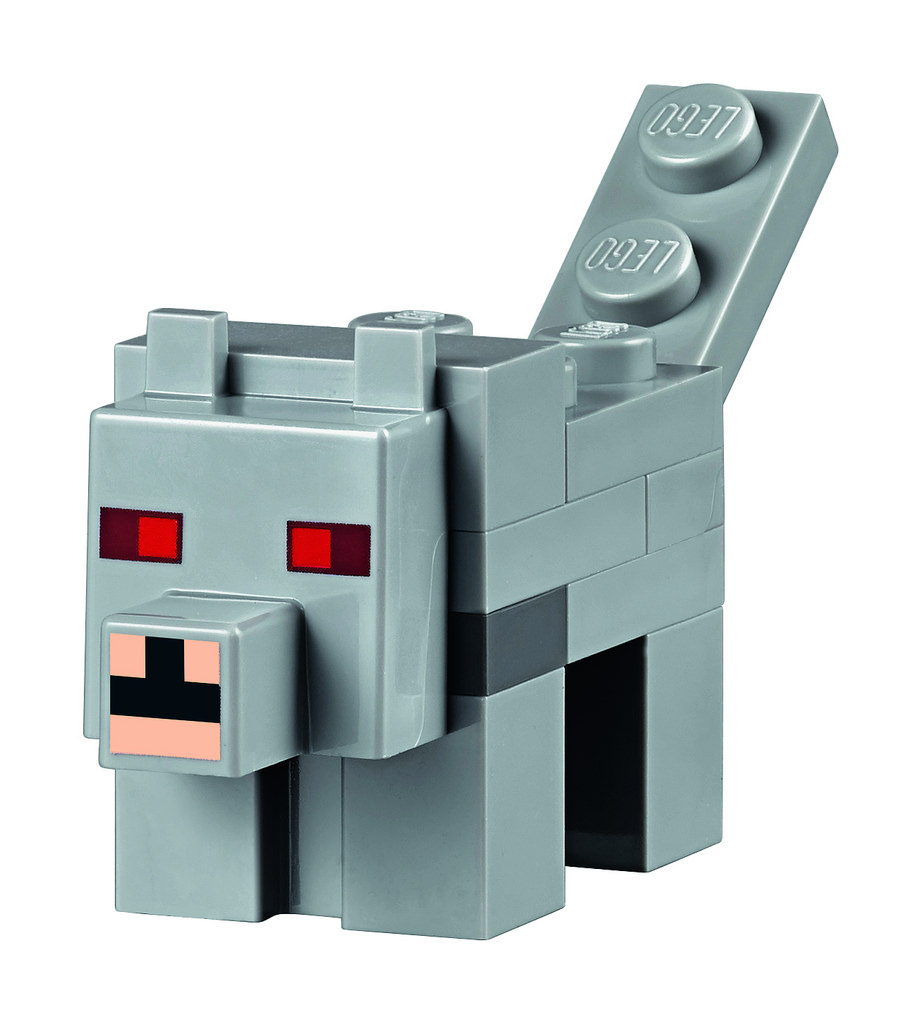 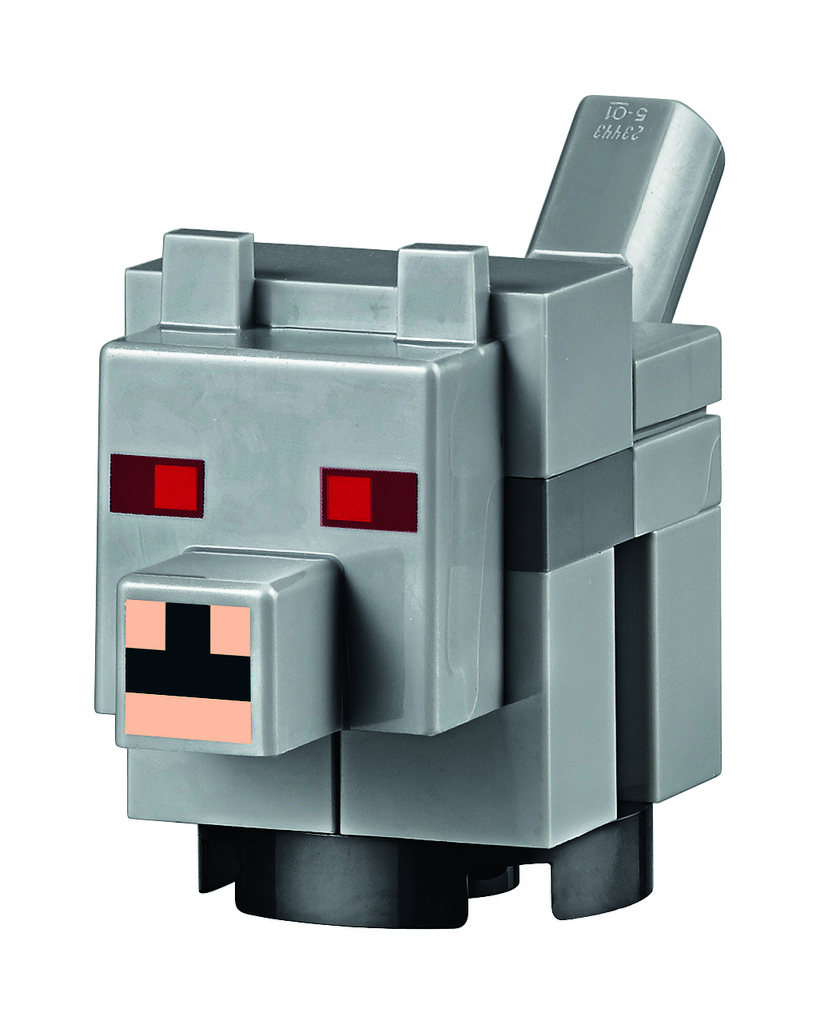 Bah bah black sheep. We’ve had white sheep for awhile, and recently the Waterfall Base featured an azure blue sheep. But now we finally get the classic black sheep. And last (and certainly least, if we judge by size) is the harmless bat. Featuring a new printed 1×1 plate, you’ll get two of these guys in the set. 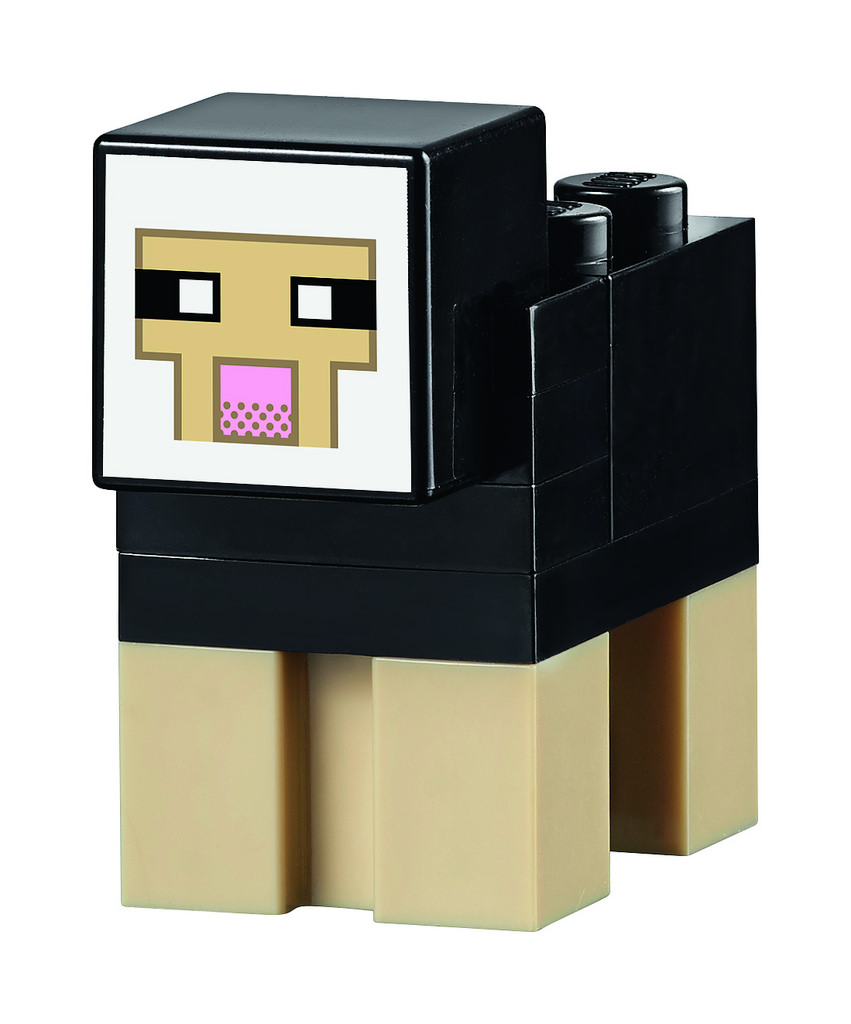 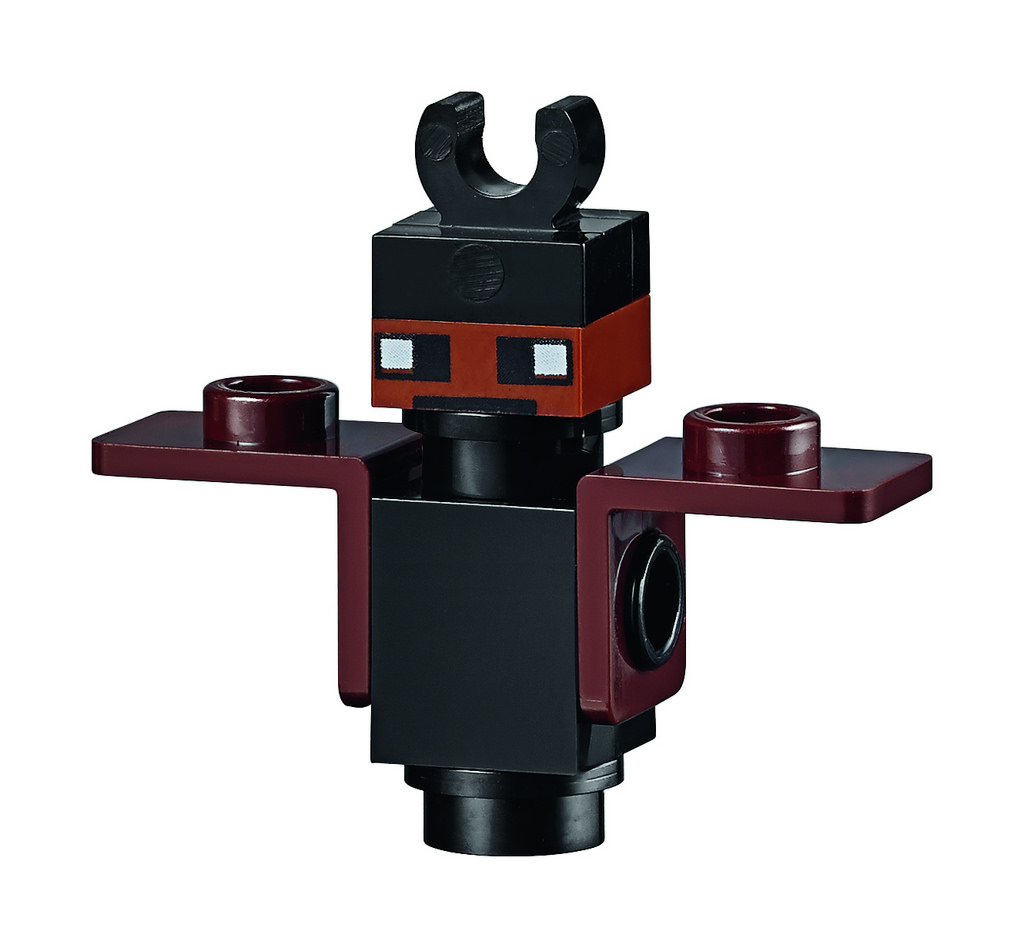 Other mobs are included for a total of 13, though the others have all appeared in previous sets.