Windmills have been utilising the energy of the wind power to automate tasks such as water pumping of grain grinding since 500-900 A.D. in Persia. This LEGO windmill by Issac S was inspired by some of the windmills seen in the video game Skyrim and was built for the 2017 Brickstory contest in the Early Middle Age category. The textured stone base of the windmill contrasts nicely with the wood and lighter stone central section and inspired use of the upturned barrel is the cherry on top. 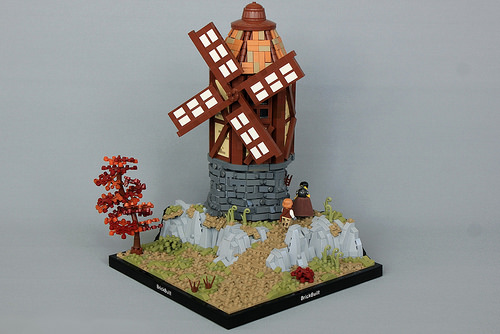 The model features working windmill blades and a grindstone that are simultaneously operated by a crank on the back of the windmill. Issac has shared a video of this feature in action.

If you want to read more about the landscaping and, in particular, the tree seen in the left hand corner of this build, Issac has shared a tutorial. Originally this technique was used by Joeri Riddler and Issac has unpacked the design to allow others to develop the technique.