Last week, we brought you reviews for the new LEGO BrickHeadz LEGO Batman Movie characters and Marvel characters. This week, we’re taking a look at the next two in the series: 41595 Belle and 41596 Beast. Like all the BrickHeadz, they retail for $9.99 USD, and they’re available now for LEGO VIP-card holders both in LEGO stores and from the LEGO Shop Online. 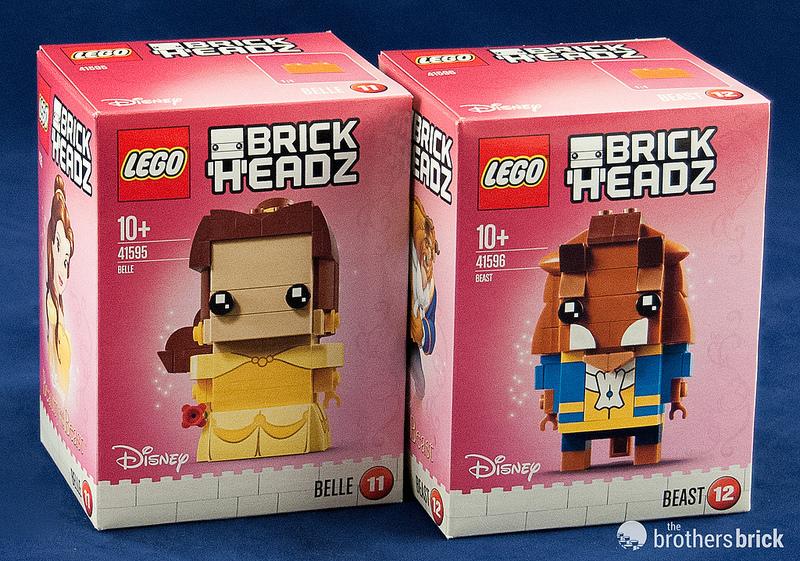 The two boxes for Belle and Beast are bright pink, in keeping with Disney’s Princess line. These boxes feature all four Disney characters, including two new, as-yet unreleased characters: Captain Jack Sparrow and Captain Armando Salazar, from the upcoming Pirates of the Caribbean: Dead Men Tell No Tales. 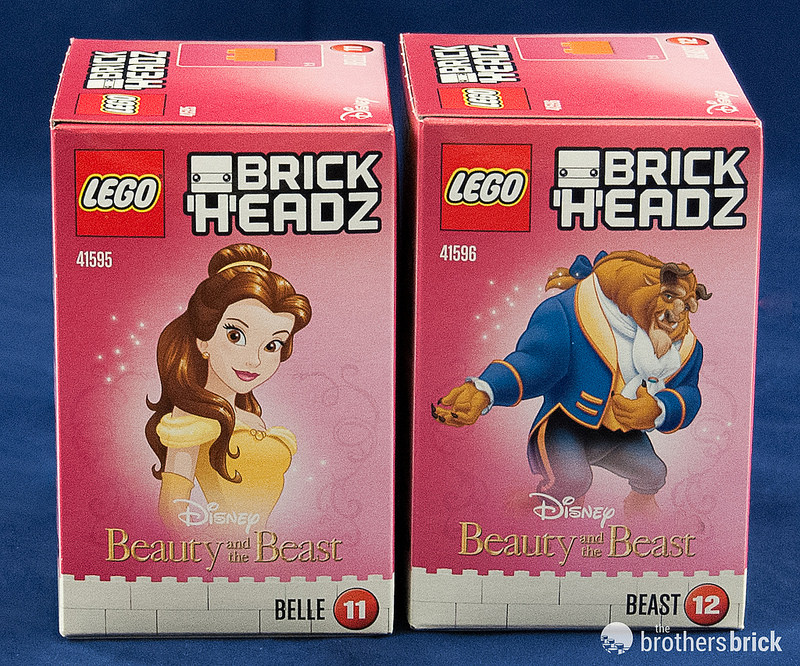 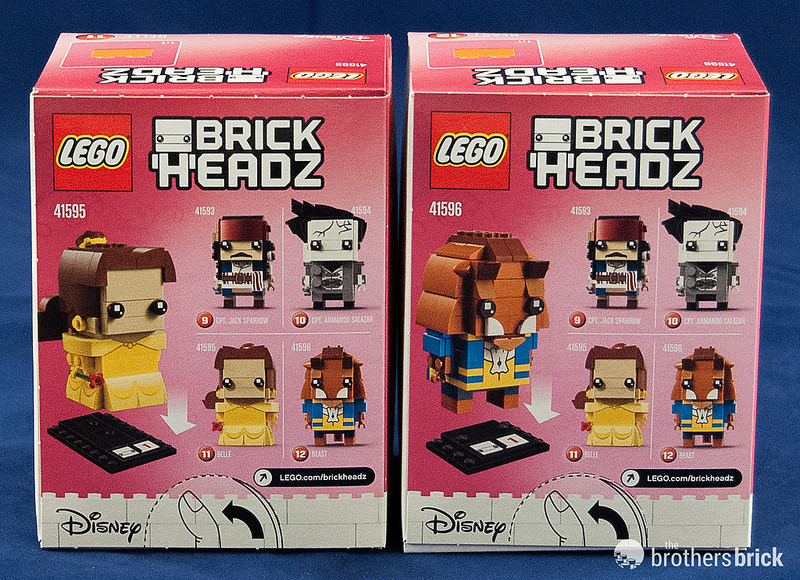 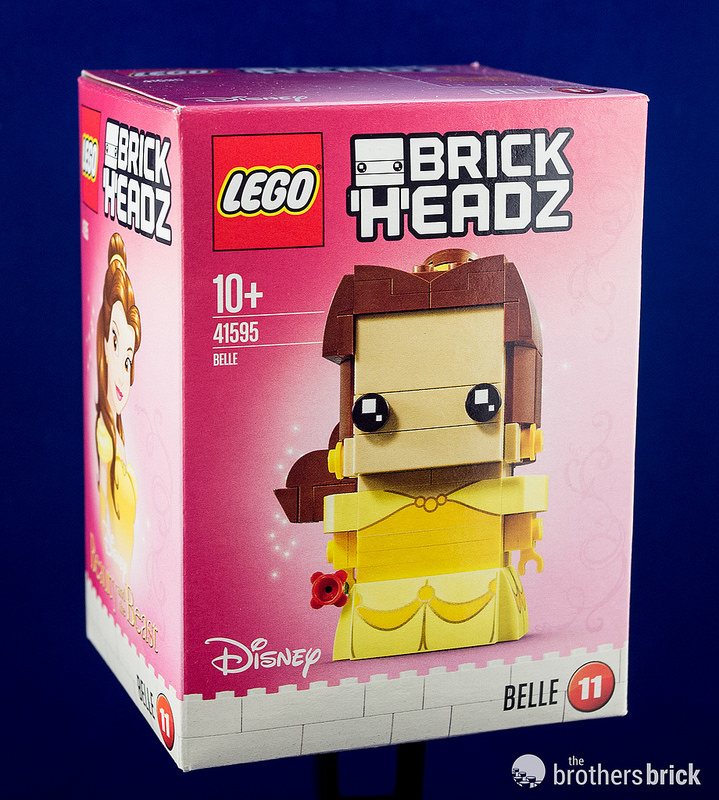 Belle features two unique prints: the 1×4 in light yellow for the top of her dress, and four identical 4x2x2/3 curved slopes in light yellow, used for her gown. Like all of the others, she also has a 2×4 black tile indicating she’s in Series One, and the standard BrickHeadz printed eyes.

Belle is unique in the series in a couple of ways. Her base is made of bricks and plates with studs on the side, allowing the curved slopes to attach, making her billowing dress. She is very sturdy, for her dress creates a wide base to rest on. 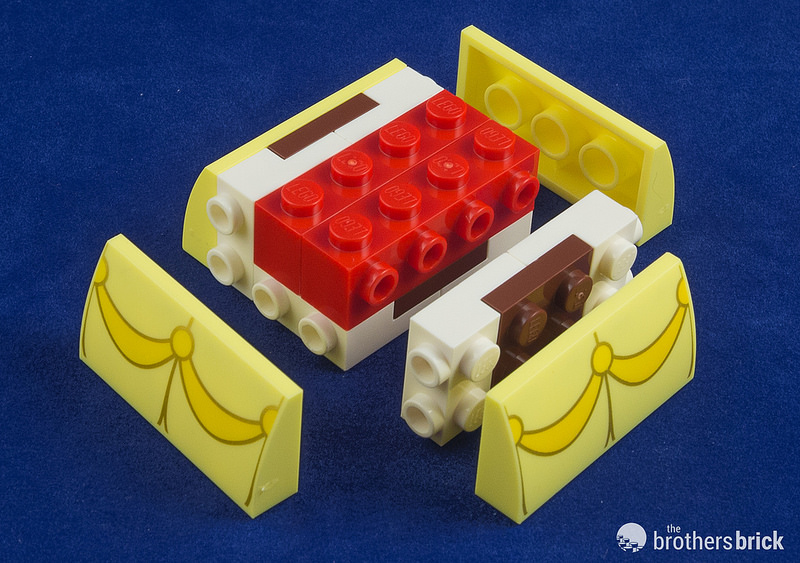 The other BrickHeadz, as we’ve mentioned previously, tend to be a bit top-heavy and tip over due to where they are positioned on the 4×6 standard base. Belle gets a double-length 6×8 base to accommodate her iconic yellow ball gown. 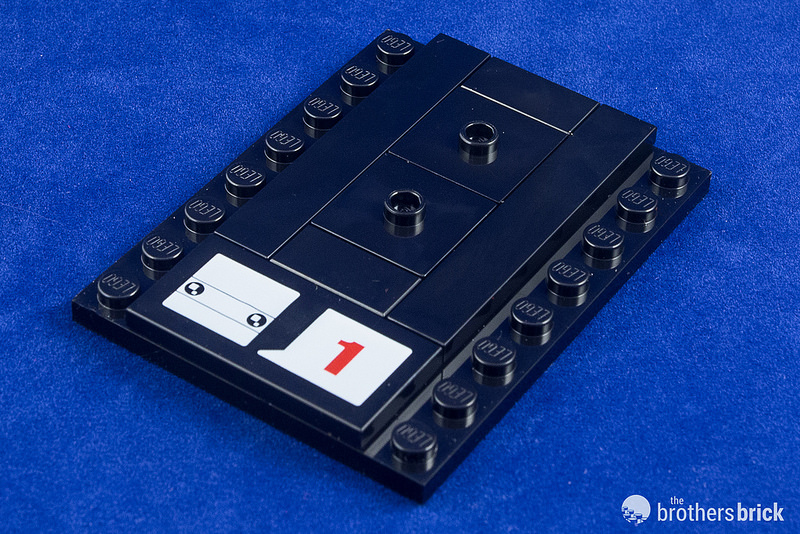 Belle’s hairstyle is from the iconic ballroom scene and works very well. The fluffy shoulder bits and sleeves for her gown are simple and effective, and look very much like the overly stylized dress she wears. Her hands are made of yellow 1×2 plates with clips, and she holds a simple rose in her right hand. She gets jewelry, too, in the form of yellow 1×1 round plates as earrings. 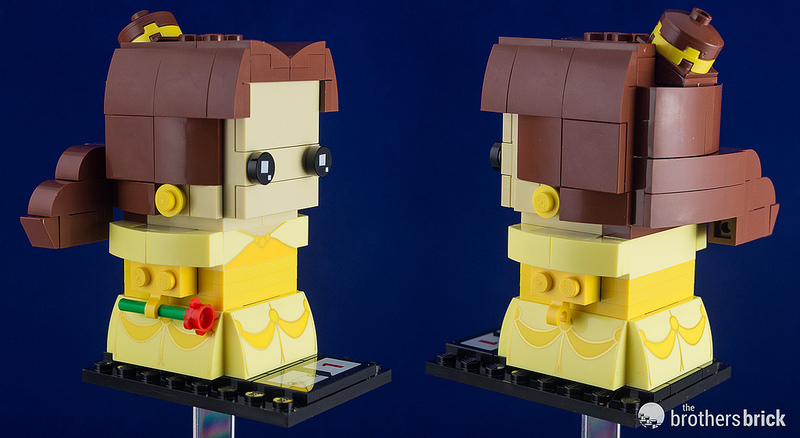 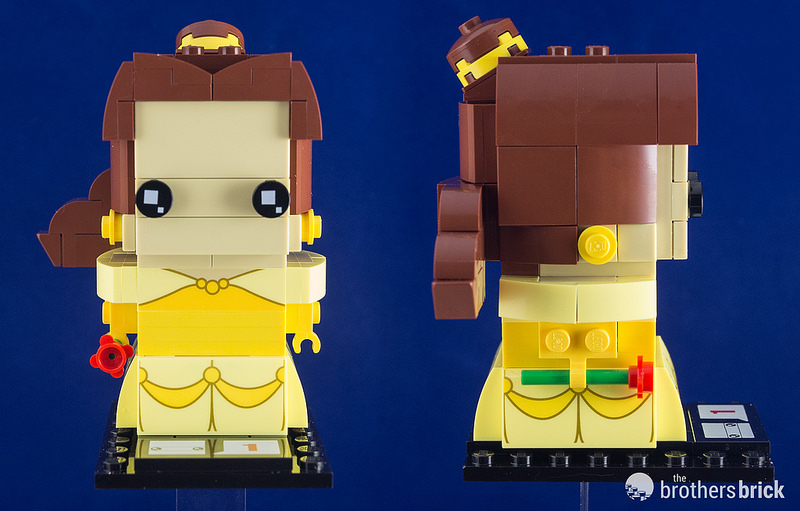 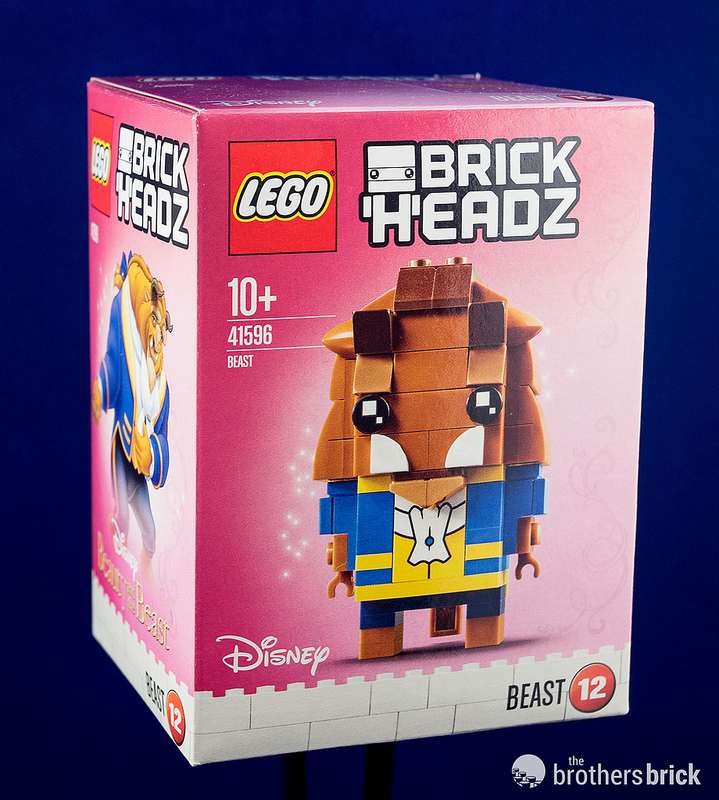 The Beast is adorable. He’s a squatty, grumpy little Beast! He comes with just one unique printed piece: the front of his fancy blue and yellow suit with the white scarf. Like Belle, Beast wears his garb from the iconic ballroom scene. He features the standard printed eyes and 2×4 printed black tile. 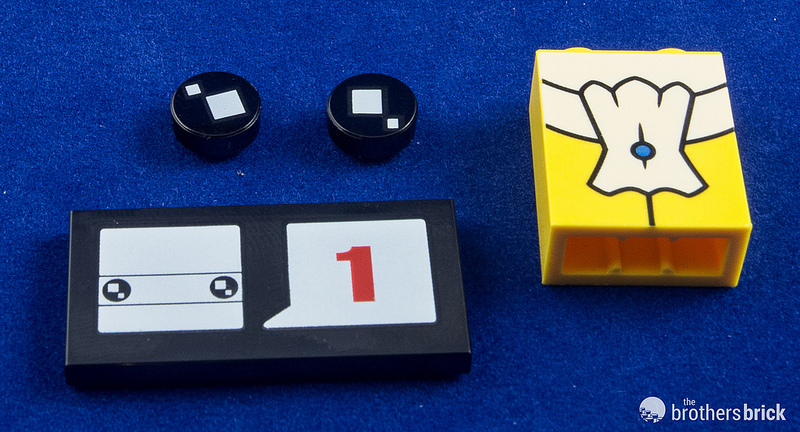 His face is impressive. Beast has a number of unique features that can be difficult to replicate in this scale, and they’re executed well. He uses dark brown cheese slopes to approximate horns, and dark orange teeth plates for ears. More cheese slopes make up his bushy eyebrows, and the 1×1 quarter circle tiles as teeth complete the face well. Two inverted cheese slopes below the mouth give him an animalistic pointy chin. 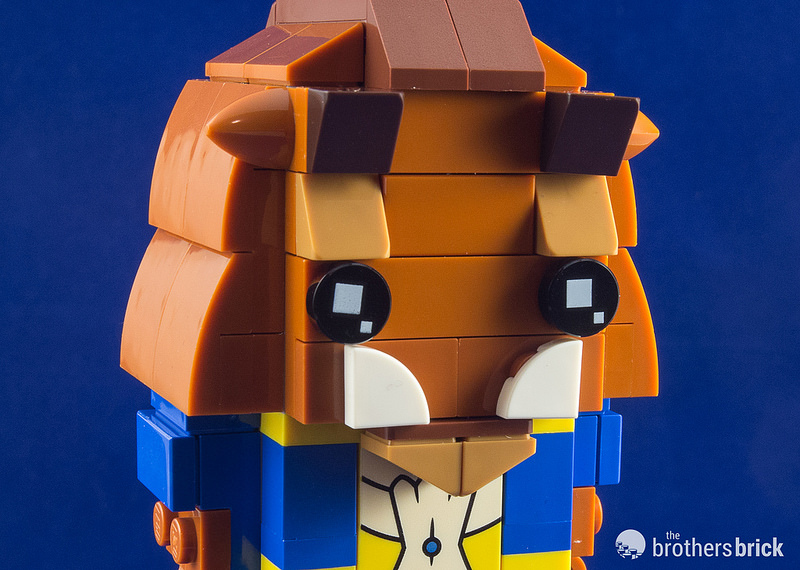 Beast’s head has the standard insides we’ve talked about in the previous reviews. He uses dark orange curved slopes to get the furry look around the head, with brown plates suggesting the hairy mane going down the back of his head. The set uses blue teeth plates as his smart ribbon keeping his hair in check. The rest of his suit is blue, and features coattails along with his little tail, made of a dark orange baby bow. 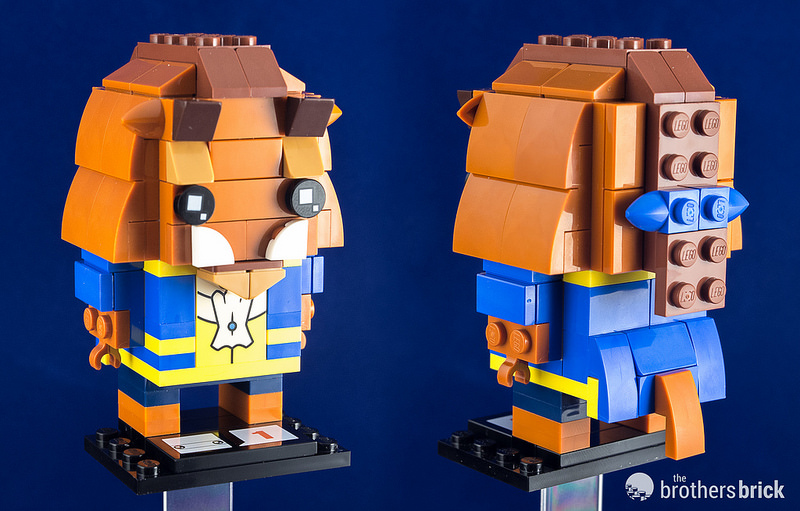 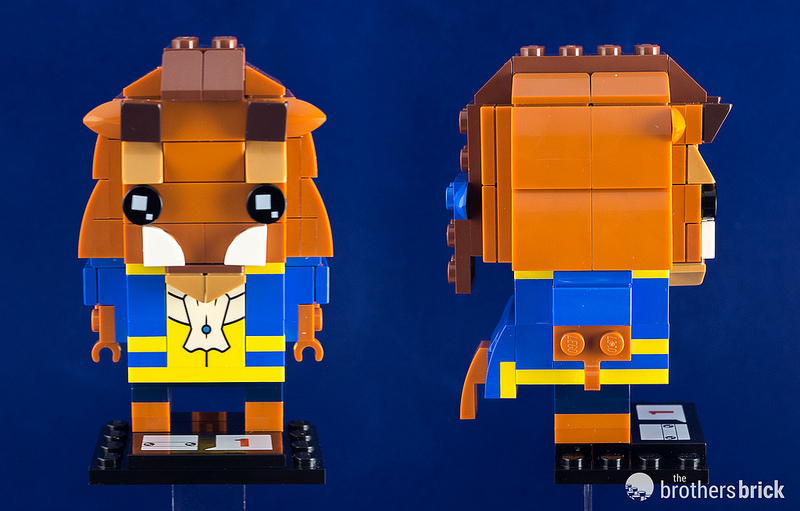 If you’re a fan of this style of building, you’ll want to get these. If you’re a fan of Beauty and the Beast, you’ll definitely want them too. If you want more parts in great colors and some useful parts for building SNOT, you’ll want these. The Marvel characters are fun, and The LEGO Batman Movie characters are adorable. Belle and the Beast? Well, I sang “Beauty and the Beast” to myself while I built them, and now I want to go watch the movie and sing along. These cute sets have earned themselves a spot on my display shelf—and I plan on picking up a few extra for parts.

LEGO BrickHeadz are available now for VIP members (which is LEGO’s free loyalty card), and they will available to everyone March 1.

Don’t miss our other reviews of LEGO’s newest line!