The Sikorsky HH–60G Pave Hawk is a twin-turboshaft engine helicopter in service with the United States Air Force, and TBB’s own Ralph Savelsberg has chosen to depict this versatile helicopter in ‘European One’ camouflage colours. The amazingly accurate shaping of Ralph’s model was the first reason this model caught my eye.  I have flown in Blackhawks and seen them close up in my previous line of work, and I instantly recognised the Hawk family resemblance. There are a few details that I particular like, for example Ralph’s clever solutions to using a limited palate of dark bluish grey, dark green, and olive green means the hubs on the wheels are actually dark green minifigure heads! 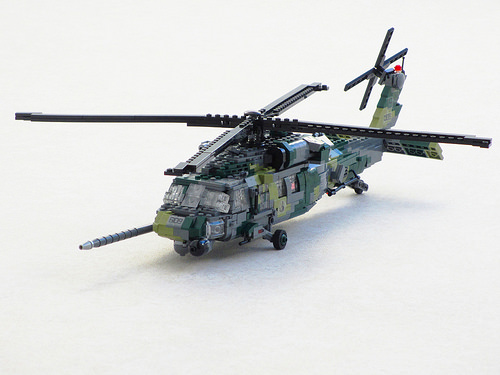 Ralph initially built the SH-60F Seahawk with its light grey colouring, which he mentions made building the far more complex camouflaged  HH-60G Pave Hawk slightly easier as the same build structure could be followed. There are a few obvious differences such as the colour scheme, the larger doors and different cabin windows, tail mounted rear wheel and HIRSS IR-suppressors over the exhausts. I love that the cabin doors open but, as this model is larger than minifigure-scale, Ralph will need to build a brick-built gunner firing out. 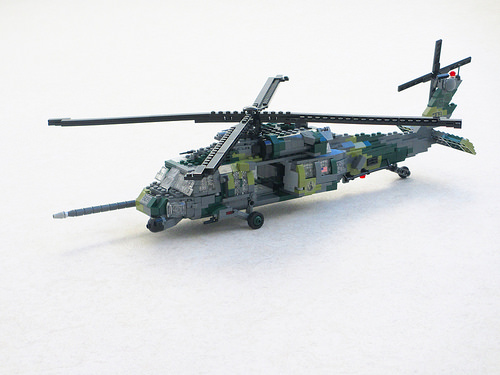 Ralph also shared a nice comparison shot between the two versions of essentially the same helicopter.  The Pave Hawk is a clear winner in the looks department to me and is a LEGO scale model that Ralph should be very proud of. I’m loving those smooth curves Ralph — great to see those baby bows being put to use in such a fine model. 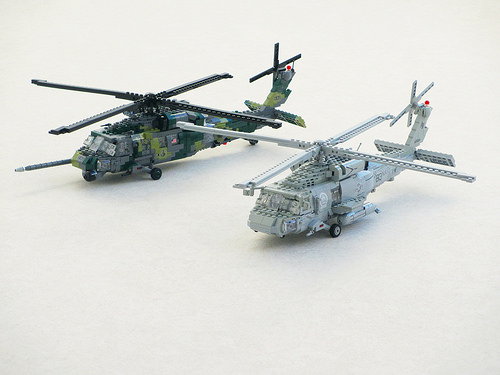