Even non-LEGO fans recognize the simple LEGO smiley face. Unfortunately, in a hypothetical world full of thousands of identical smiling minifigs (now where have we seen that before?), being instantly recognizable can lead to problems. Illustrating one of the potential hijinks of such a world, Paddy Bricksplitter built an Identity parade (or as we call them here in the United States, a police lineup). 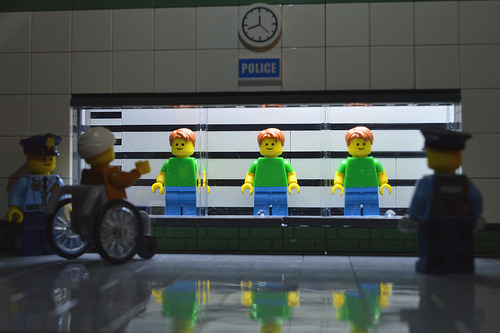 After a crime, police officers will place their main suspect in a lineup along with several “foils” who have a similar weight, height, build, and coloring as the suspect. Then, the police officers will bring in an eyewitness (in this case, a severely injured minifig and presumably, the victim of the crime) to view the lineup through a one-way mirror and “pick out” the criminal. But when everyone looks identical, how can you possibly identify the right person? And who would ever volunteer to stand in as a “foil”?