This fantastic architectural build by Miroslaw is a 1:125 scaled version of Spodek, a huge multipurpose arena in Katowice, Poland. Spodek means “saucer” in Polish and refers to the flying saucer appearance of this huge structure which seems to defy some of the laws of LEGO gravity. Achieving a circular structure is hard, achieving a stable but tilting structure is even harder,but to combine a circular structure that has a tilt and also an inverted sloped roof must require some feat of engineering. What sorcery is this! 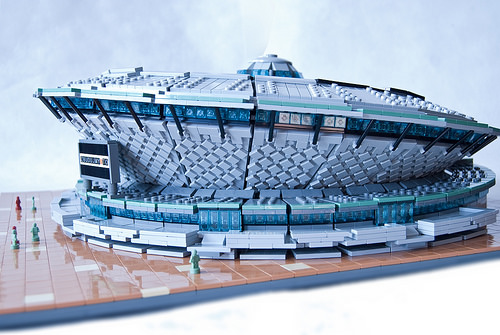 Interestingly, the builder has shared quite a few WIP photographs that shows how the inverted sloped central portion of the build was achieved. The builder used a series of Technic arms to allow a Technic brick to be placed at the correct angle before attaching the  plate. These support structures have been placed in a circular formation and angled plates as the inverted surface ensure minimal gaps between each section. The bars at the end of each plate section appear as though they are holding the roof on when you see the completed build but in reality they have no structural role. 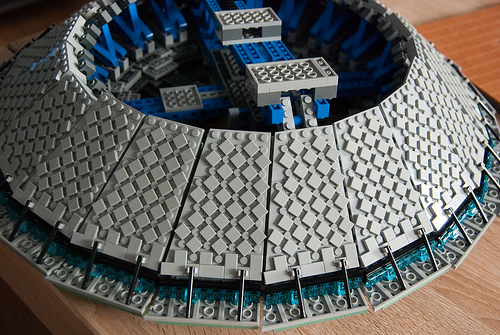 In addition, the clever tilt mechanism is also a hidden scaffold of Technic bricks, beams and arms to ensure a secure fit to the base section when the roof portion is upturned. You can also see just how many plates were used in combination to ensure a nice sturdy roof top. 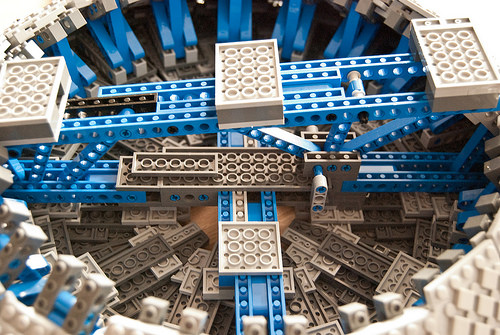 The base section itself uses wedged plates at the bottom (the orange wedge plates) to give the correct angles for each small slice of the complete circle. By using both wedge plates as the base and a dark bluish grey wedged plat at the top, a minimal gap lies between each slice. The overall impression is a complete circle rather than lots of small angled slices. 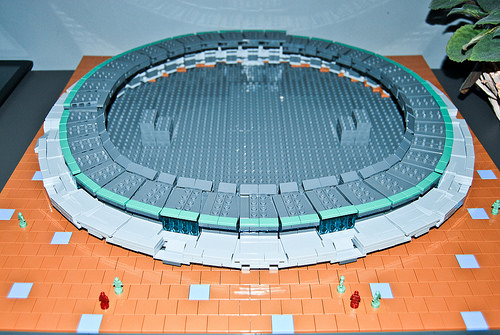 As you can see, the completed flying saucer structure is a feat of LEGO engineering rather than LEGO sorcery.