In June, French artist Mat Green amazed us with a pair of life-size LEGO minifigures made of steel. Those figures, named Hugo and Pablo, were a classic minifigure and a punk rock LEGO skeleton. Mat has now finished his next project — more classics you’ll surely recognize, the pirate Sparrow and his parrot Jacquot. We spoke with Mat about his work translating these iconic LEGO figures to life-size metal sculptures. 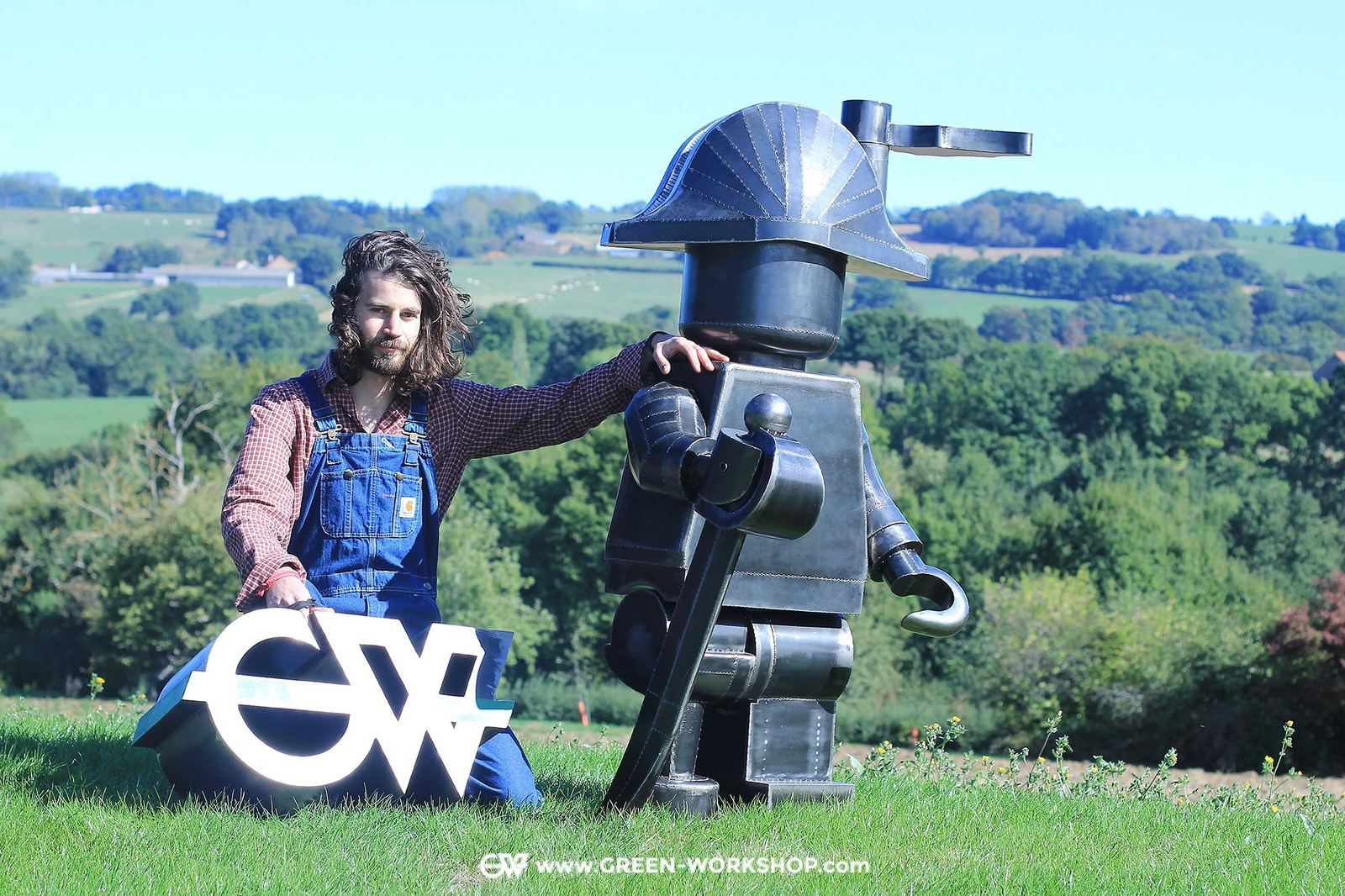 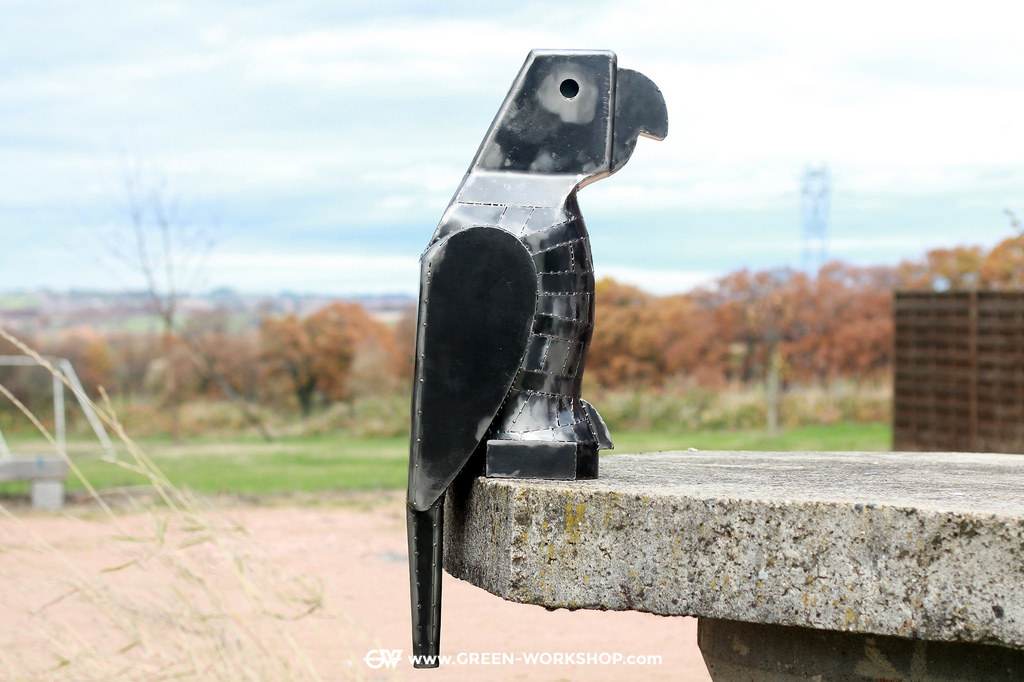 Mat’s sculptures are fully poseable, and they disassemble exactly like their tiny plastic counterparts. 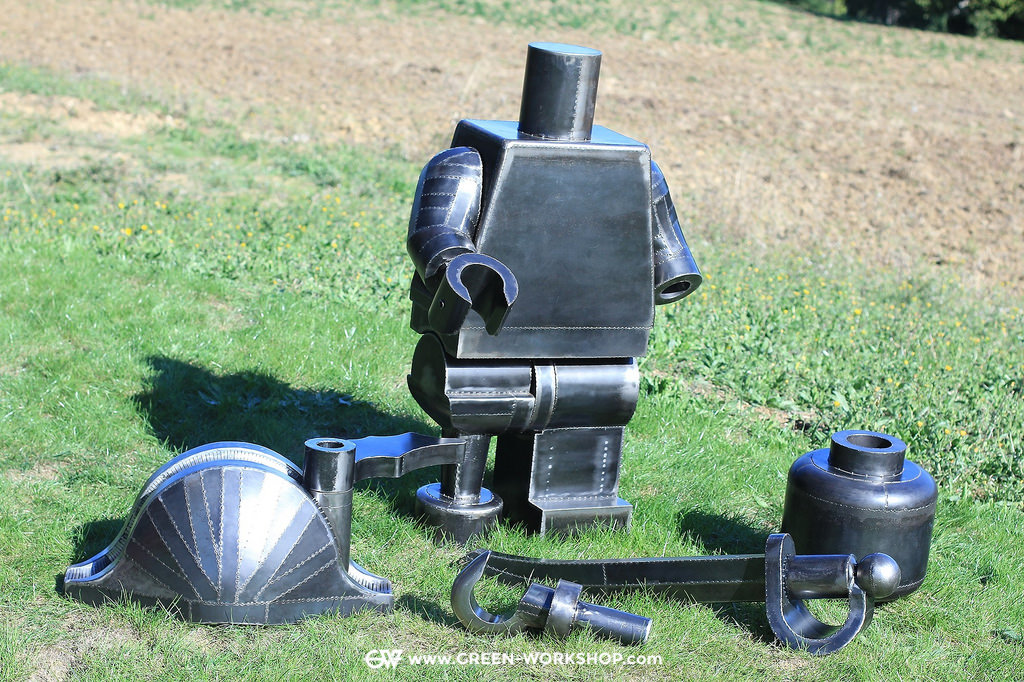 Mat created this great video talking his process, and showing how he works on the pirate Sparrow. We also asked Mat some more questions, which you can read below.

The Brothers Brick: How did you decide on the names Jacquot and Sparrow for the new sculptures?

Mat Green: When it comes to the names of the sculptures, I was wondering how I was going to name the parrot, and then my grandpa told me that it should be named Jacquot. “All parrots are named Jacquot!” he said. Phonetically, it ends with O so it was perfect — it is kind of a small tribute to the Lego Brand. For Sparrow, my brother really loved the Pirates of the Caribbean movies, and once again it was phonetically matching with O, so the name was adopted!

TBB: How tall is Jacquot? And how much does he weigh?

MG: Jacquot was built to the same scale as my three other minifigures! That’s to say, about 31 times bigger than the original ones! Which makes it about 95cm tall (about 37 inches)! I did not take the time to put the parrot on a scale, but I would say that its weight is about 8 kilos, so… about 17 pounds if I am not wrong! 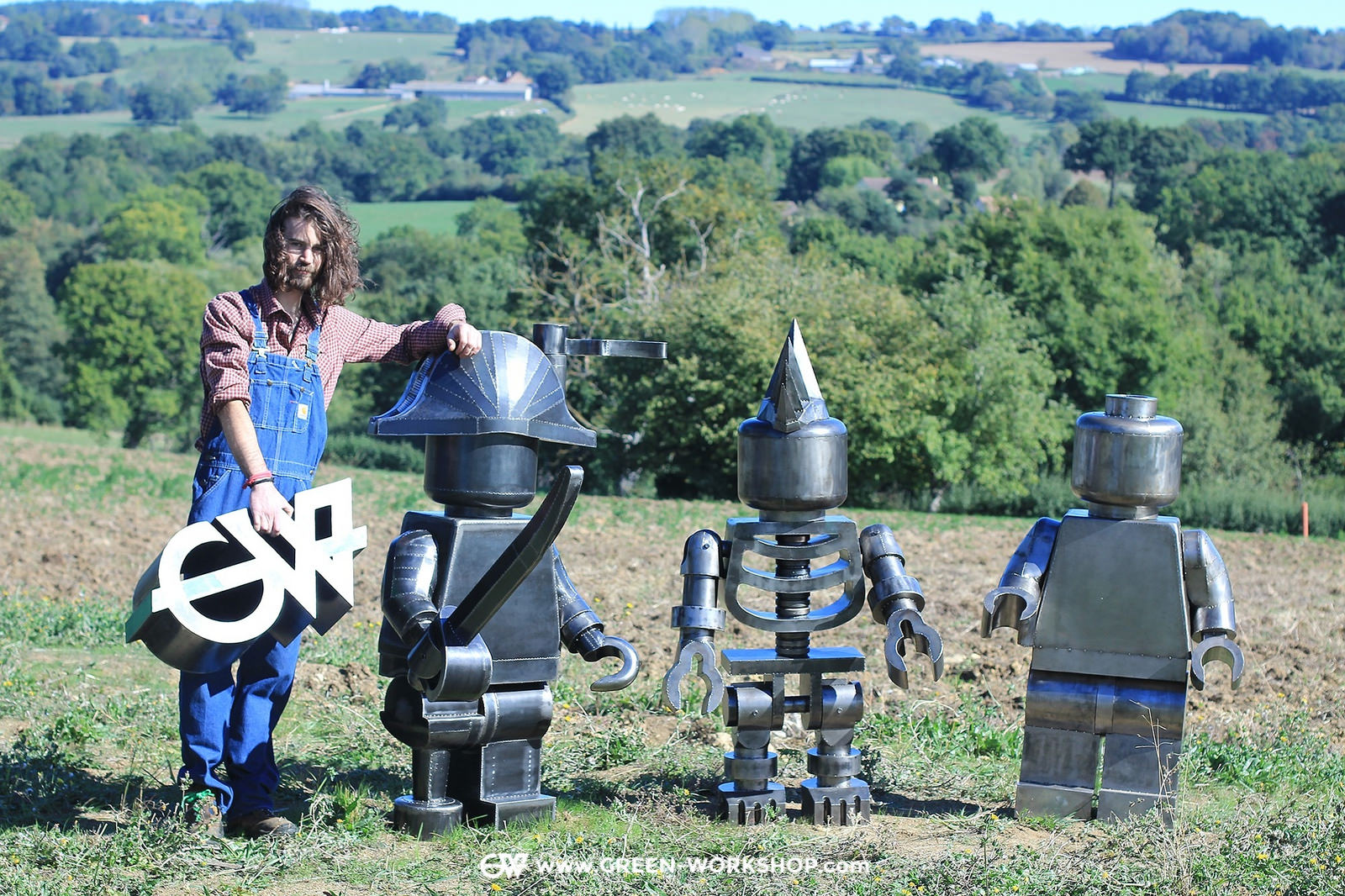 TBB: Of the pirate, the classic figure, or the skeleton, which was the hardest to build, and why?

MG: Well the hardest one to build — it really is a tricky question. Because I could think it was Hugo, the original one. It might look like a really basic shape when you hold a minifigure in your hand, but it actually has a lot of details you have to take into account if you want the result to be nice. You have to solve a few technical problems. And since it was my first character, it really was an adventure to make everything work!

For Pablo (the skeleton), it really was a challenge — and I mean it — to respect every single detail of the torso, arms and legs. The character is a lot more complicated than the basic Lego minifigure. And you have to be a bit ingenious to make the arms wiggle the same way it does with the original skeleton. For the legs you have to make your brain work a bit too. I like the fact that each creation is a real new challenge. 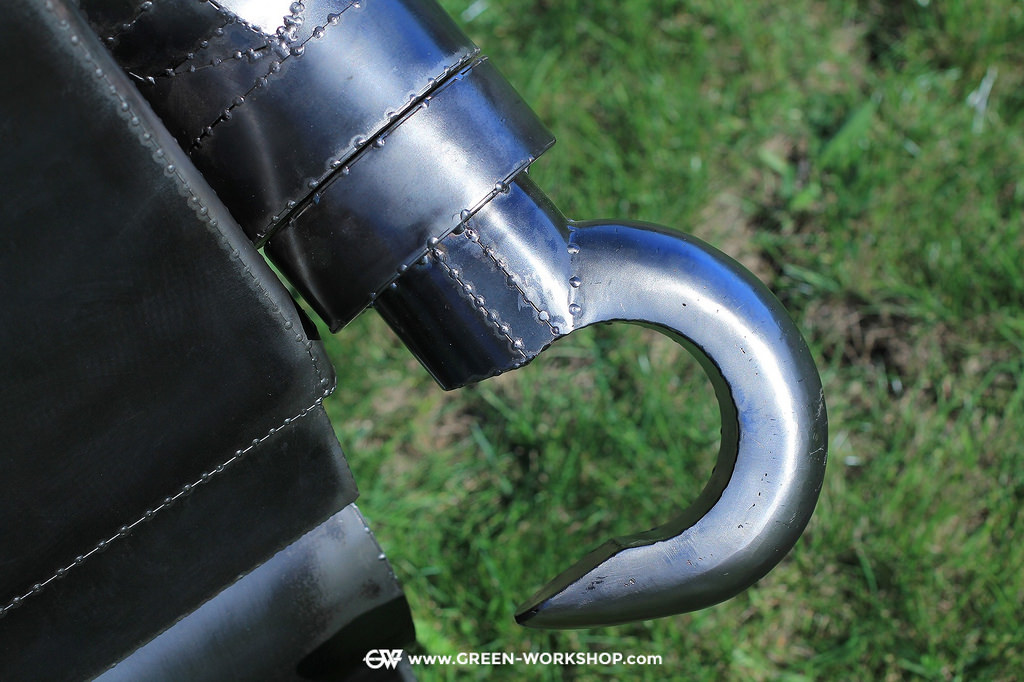 For Sparrow, even though the torso, arms and legs are not perfectly identical to Hugo (I tried to improve all the sections with small details) I knew a bit what to expect. But I have to say the metal wooden leg wasn’t easy to make, and the hook and hat… these two parts drove me crazy! If I knew the amount of work it would represent, I don’t know if I would have chosen the pirate! All right, I probably would still have chosen the pirate. Because when I was a kid, the pirate really was a badass character to me.

It’s honestly hard to say which one between the three has been the hardest to build. But if we have to talk about time it would be the pirate. 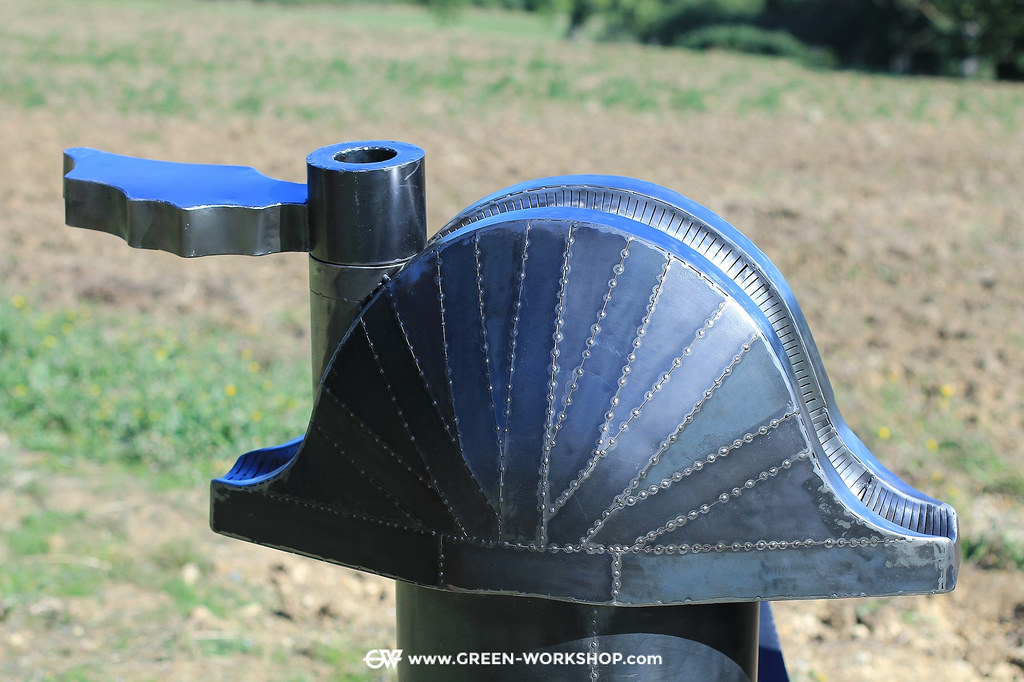 TBB: How many plates of metal are in Jacquot?

MG: I honestly don’t know how many plates of metal are in Jacquot, but there are a few of them. I don’t have Jacquot in my apartment anymore, so I can’t really count them! 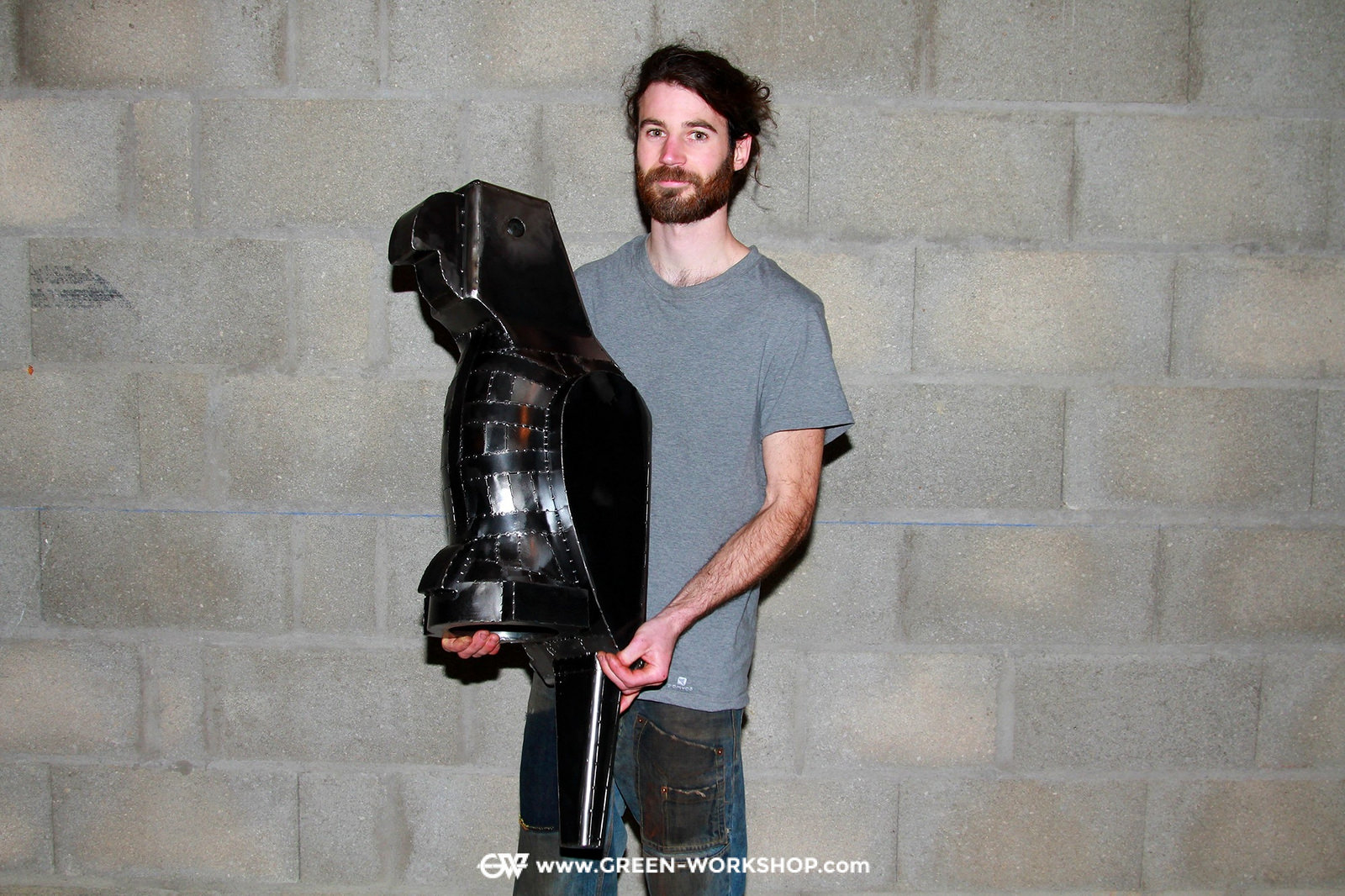 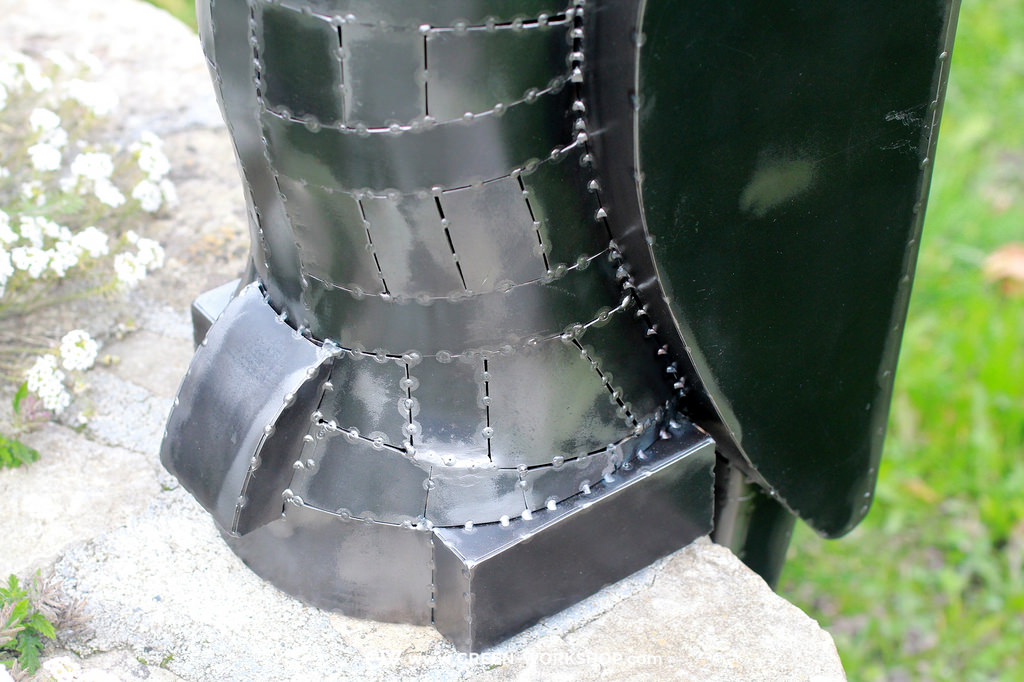 TBB: Will they rust?

MG: Hopefully not. They received a surface treatment, a transparent varnish, but eventually they will rust if you leave them outside. A lot of people are asking me if they could put it in their garden; the answer is no, you should not do that. If I had to make a new one, I think I would make in stainless steel so it could never rust. But the design of it would be different.

TBB: Do you build with plastic LEGO pieces at all? If so, what do you build?

MG: Do I build things with Lego plastic bricks? Yes, I love to! A friend of mine really has a lot of Legos and he loaned me a huge amount of pieces. Most of the time I am trying to build cars and helicopters with Technic Lego, so I can make my brain workout a bit with engines and stuff! But I am not really the kind of guy who could have a perfect collection of Legos. Every set of Lego has to be taken apart so you can have a big amount of pieces and create things with ideas flying in!

TBB: Will these be for sale? 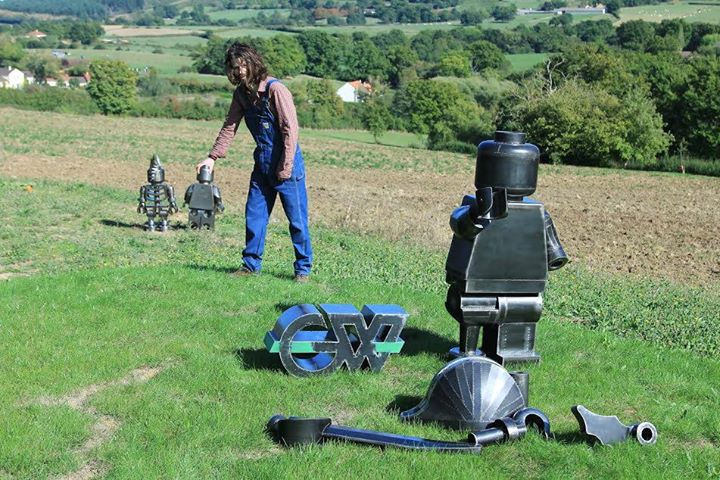 For more details and photos of these models, visit Mat Green’s website, green-workshop.com