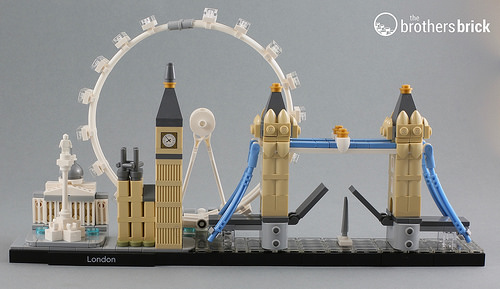 I was intrigued to know which iconic landmarks would be chosen as London is a city full of grand architecture, iconic buildings and landmarks. Indeed LEGO have already captured Buckingham Palace, Big Ben (twice) and a London Bus across the Architecture and Creator series. The 5 chosen landmarks are all well known and perhaps more historical than other potential buildings such as the Shard or the Gherkin. 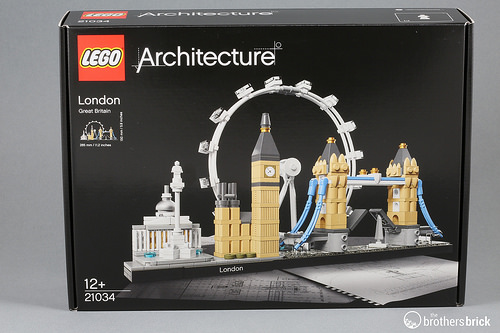 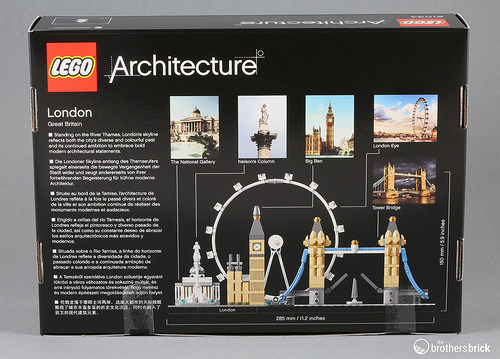 As with all LEGO Architecture sets, London comes in a sensible-sized box (not half full like some large sets) with a thick 120-page manual. A few facts, historical information and photographs of the featured structures preceed the building instructions. 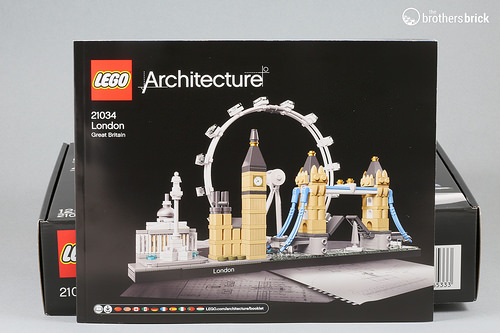 There are a handful of parts of particular interest in this set. Firstly, two printed parts are included, the first being a tan 2×2 brick with a clock face on one side (part 6175701) and the other a 1×8 black tile with LONDON printed in white (part 6174611). 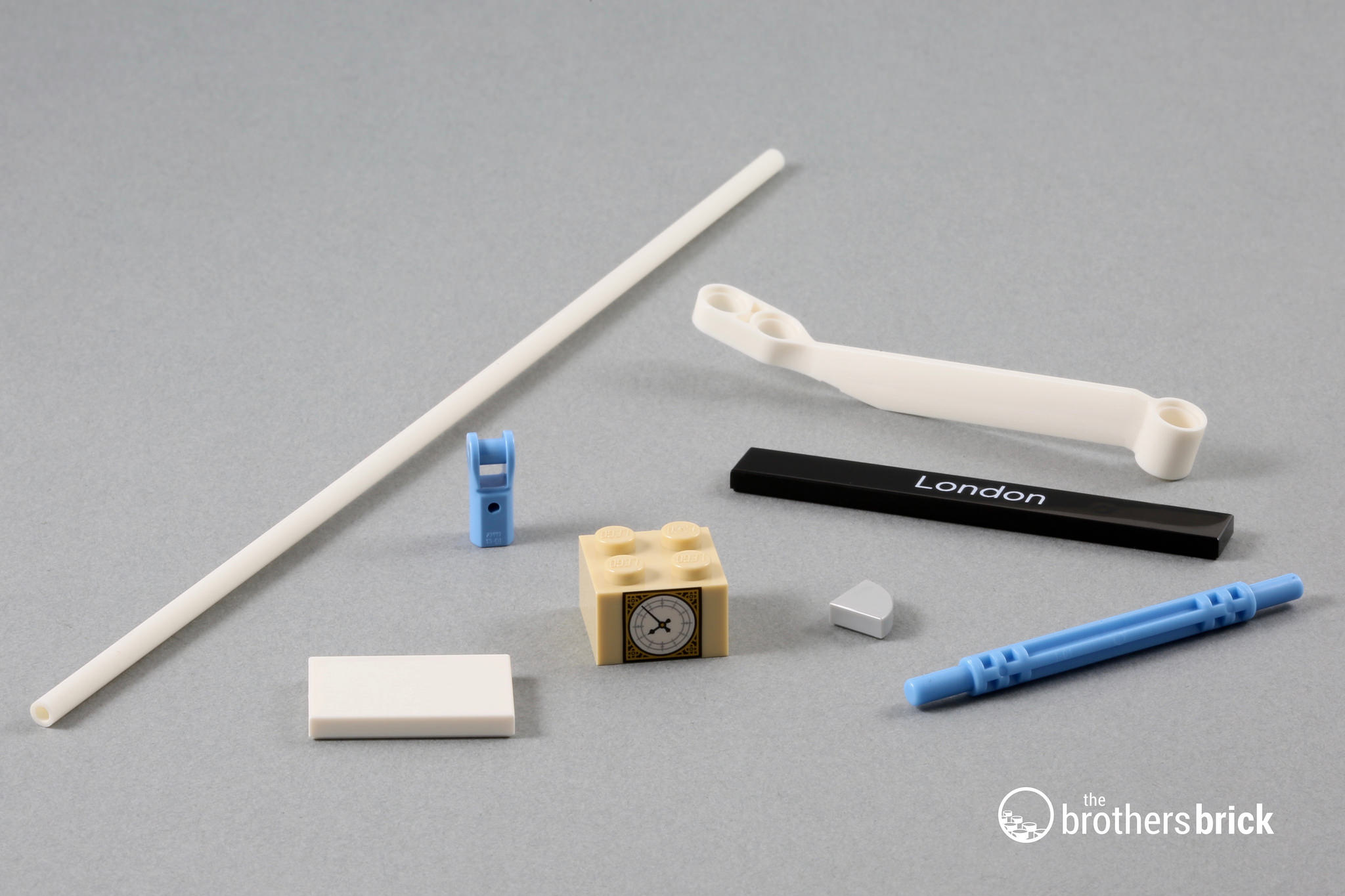 The build process starts with the base layout and utilises the same method as other skyline sets to ensure an elegant tiled edge, using Modified Plates 2 x 6 x 2/3 with 4 Studs on Side and tiles. The base footprint shows the jutting out plate that will accommodate the London Eye. 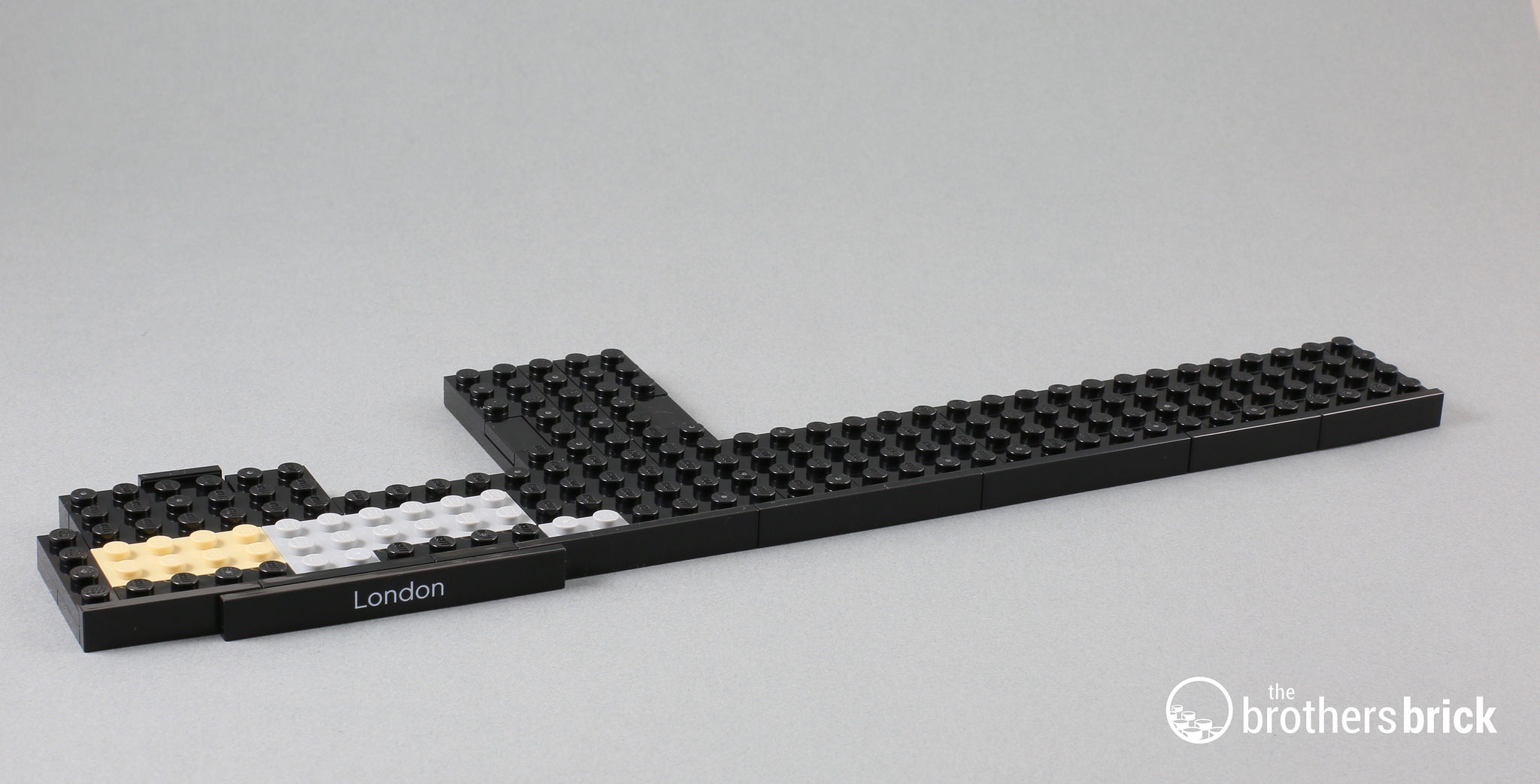 The paved area for the National Gallery and Nelsons Column is nicely layered with an offset to represent the large staircase. The new 1/4 round tiles look great in this set as a small but significant detail. The River Thames flows over the rest of the base represented by Trans-Clear tiles. Artistic license has clearly been applied for aesthetic purposes as I have swam a few times in the River Thames and it is definitely not Trans-Clear! 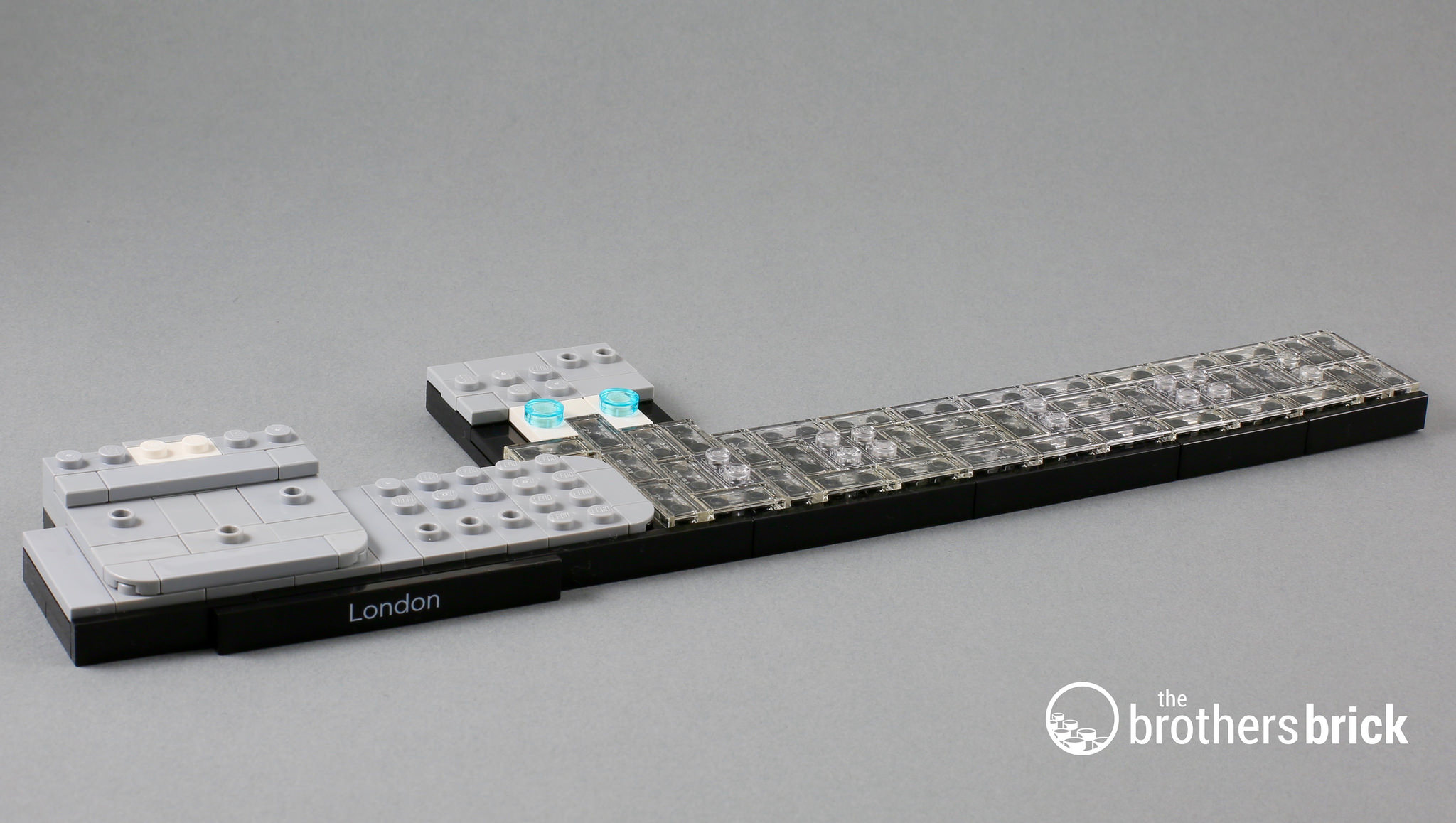 The first landmark to rise up from the Thames is Tower Bridge. The two bridge piers are constructed with inverted brackets and curved bricks to give a sturdy base. 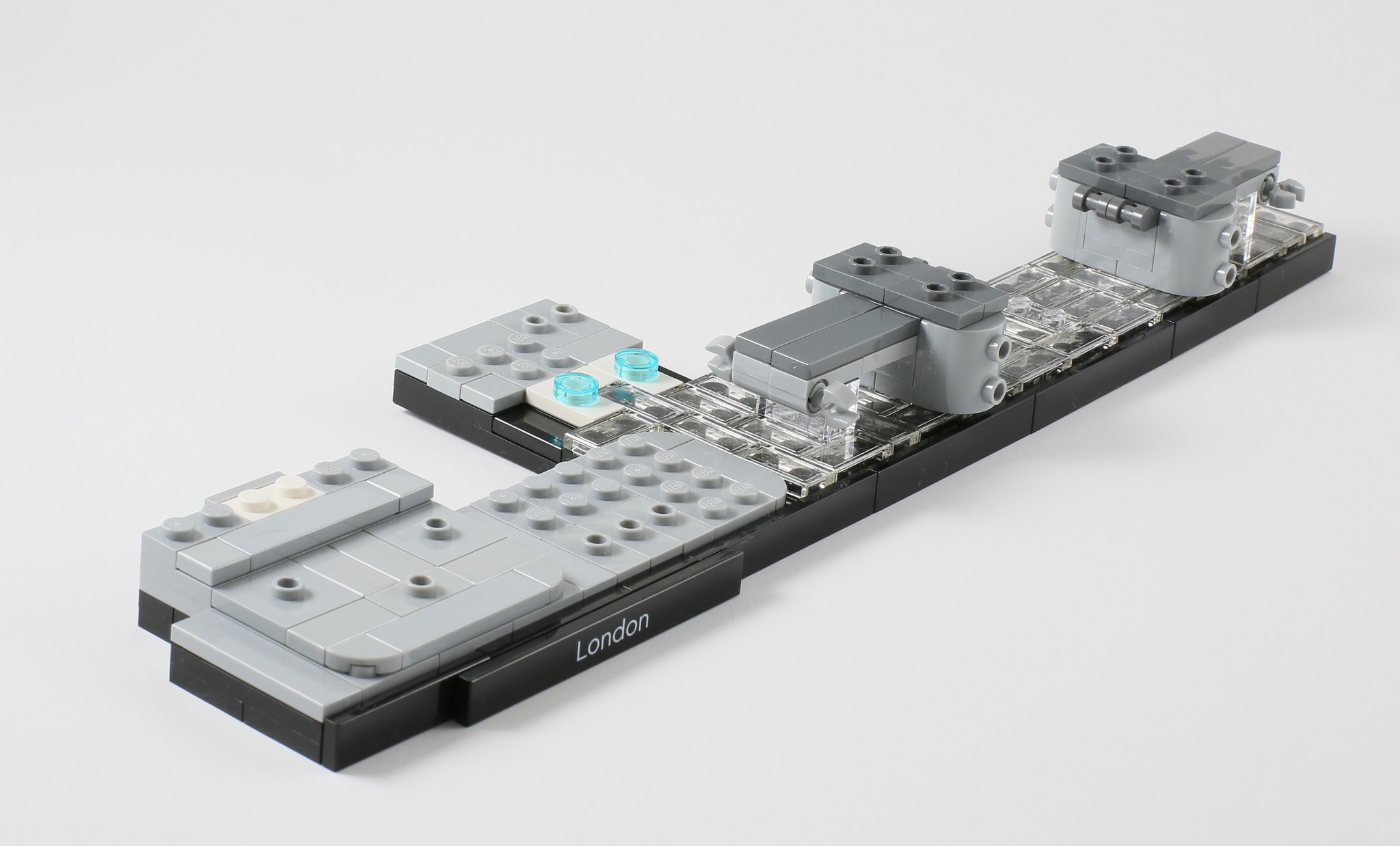 The main Tower Bridge structure is very nicely designed with arches and headlight bricks on their side. Clever use of 1×1 Technic bricks accommodates the protruding stud from the supine headlight brick. The bridge is built in the raised position to accommodate boats passing through. I particularly liked the use of Medium Blue as a highlight colour for the suspension cables and the elevated pedestrian walkway. This also allowed a re-colour of the axel and bar holder with handles as Medium Blue is a new colour. The bridge’s architectural details are represented by a range of different modified plates with teeth, although the Tan 1×1 modified plate with tooth vertical inverted (part 15070) has only appeared in one other set up until now, Creator Big Ben set 10253 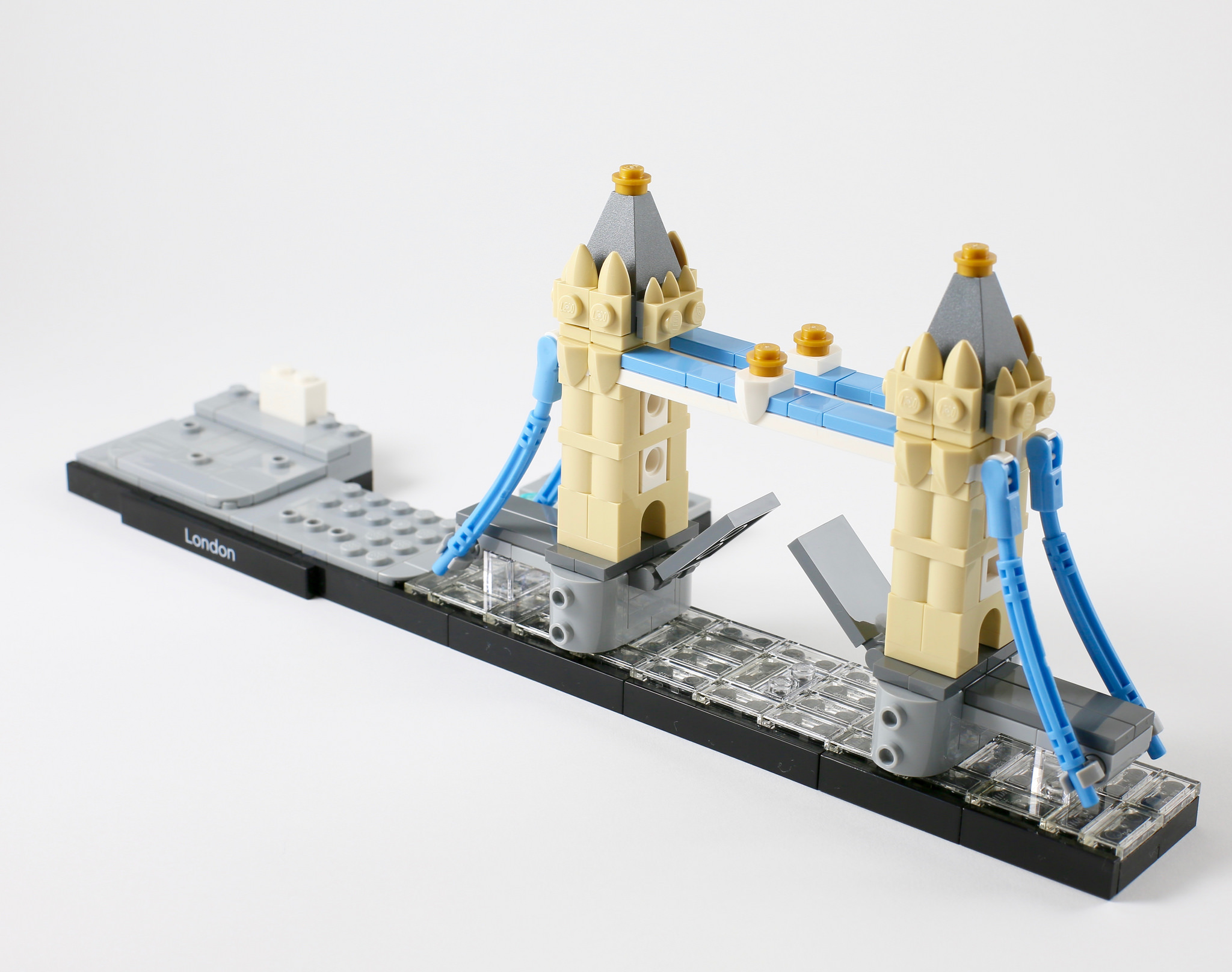 The National Portrait Gallery comes next with its columns depicted with 1×2 Grille Tiles. The structure is simple but effective and the new white 2×3 tiles keeps the rear view neat and tidy. 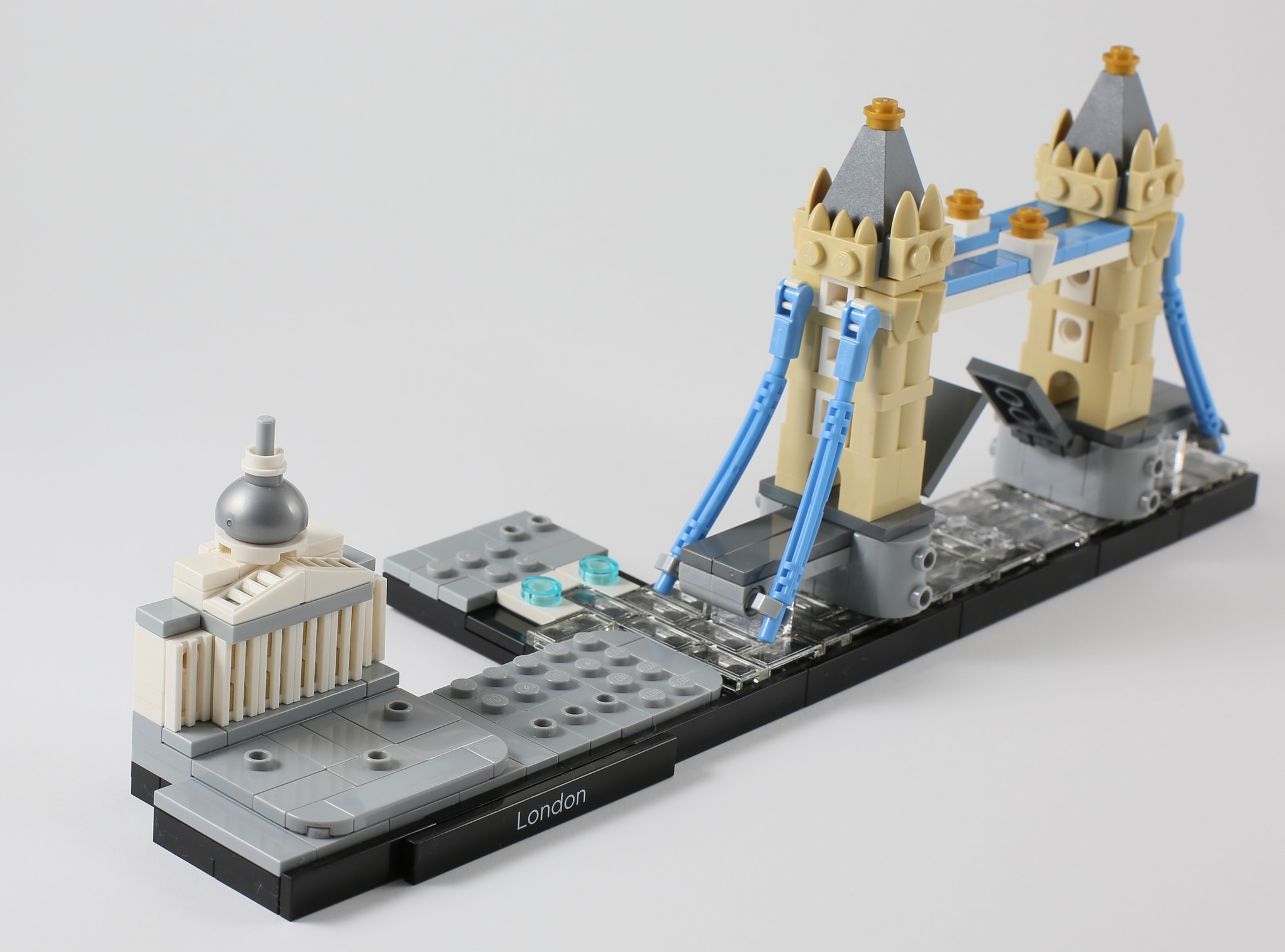 Our attention now turns to the London Eye which dominated the background appropriately representing its real life size. The Eye is built with two pairs of rigid hose with the viewing pods added along the length. Each pair is then attached at the base and top with two Technic pins (shame they are colour-fixed and could not be white rather than light blue grey) 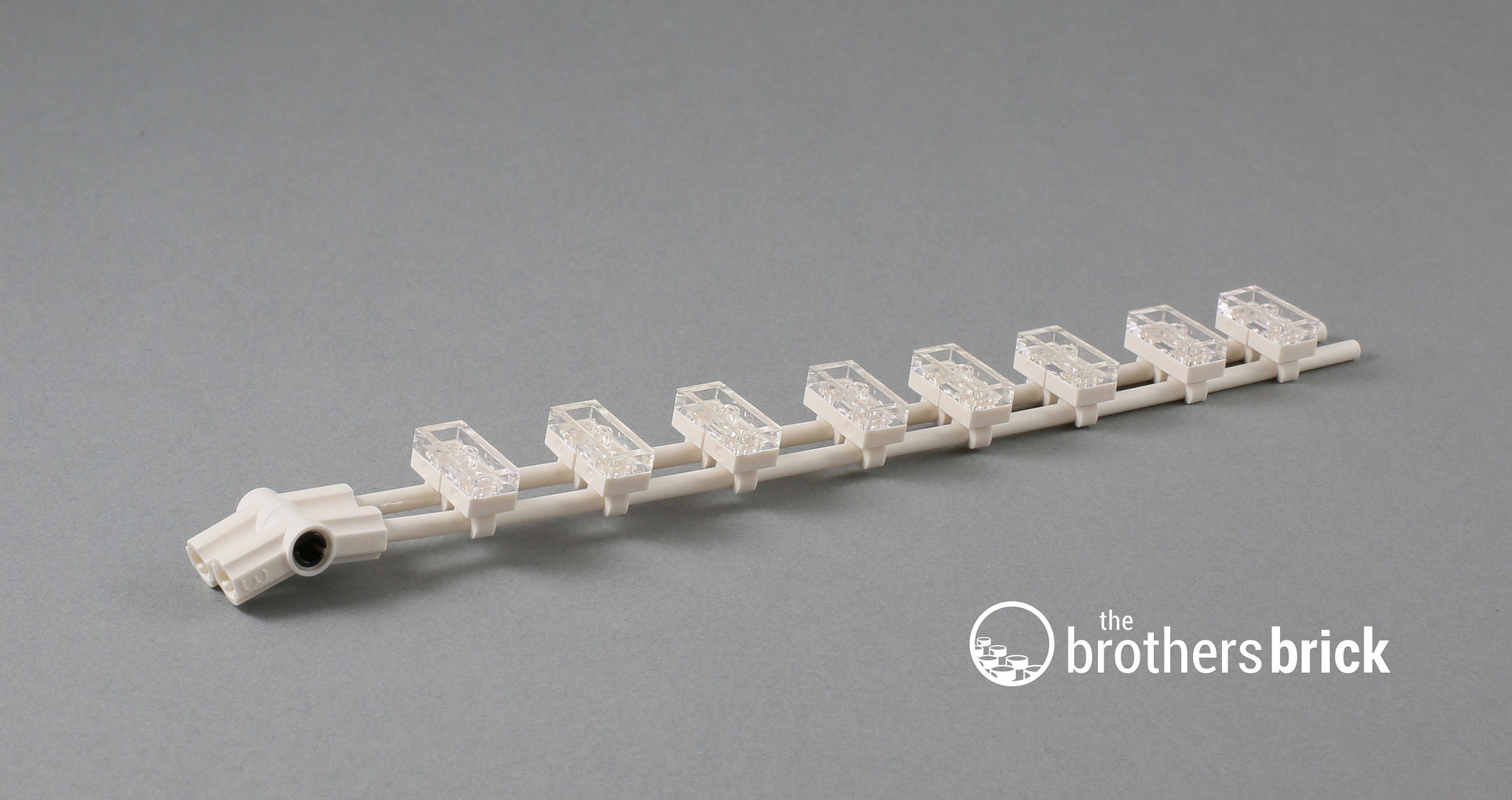 The ingenious use of the two Technic wishbone arms is fantastic as the supporting arm. In a way it’s a shame it is hidden from front-on view later in the build. I couldn’t quite get my Eye to be exactly spherical but on viewing the set built in store, it seems that I was trying to achieve the impossible. 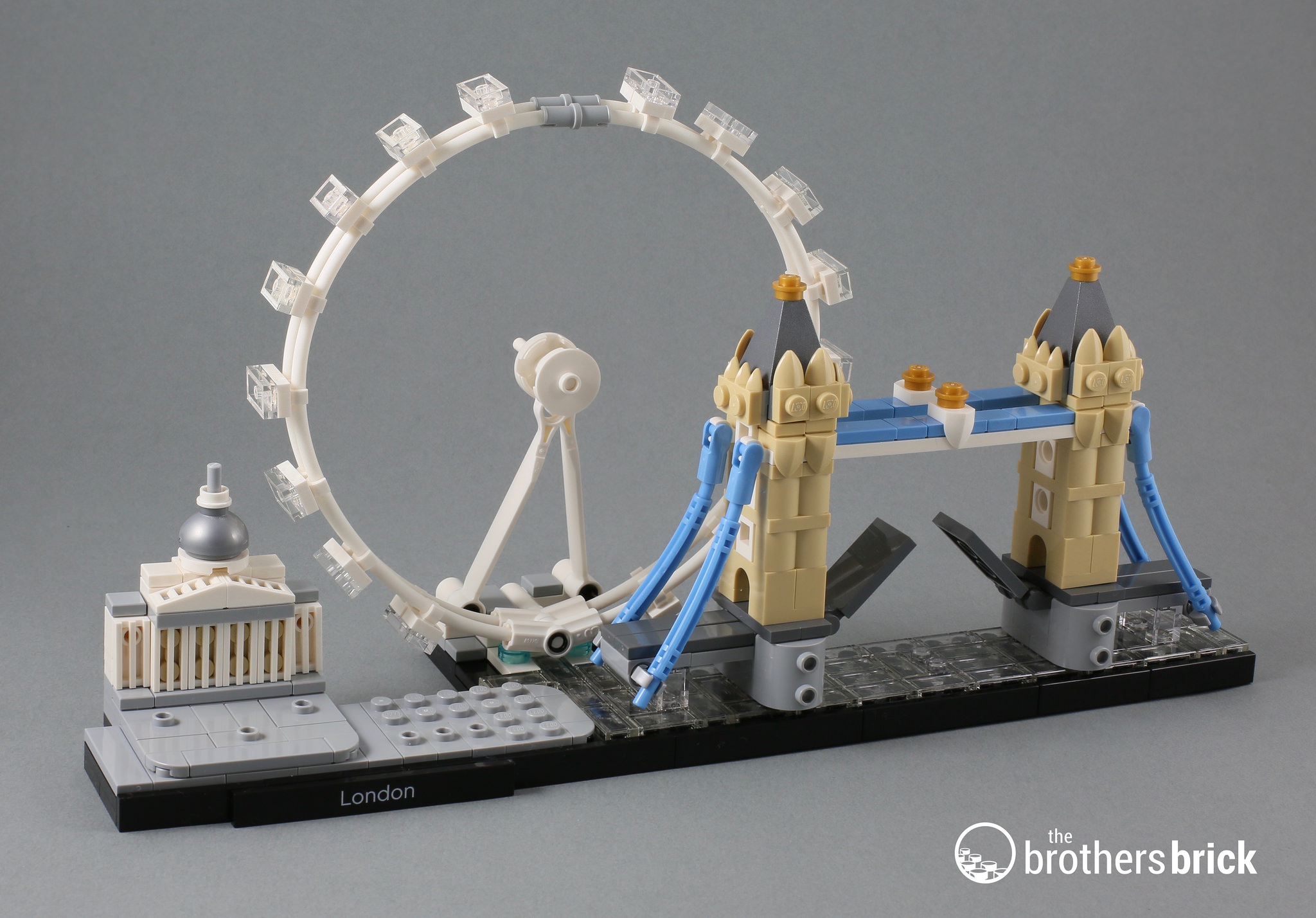 Construction of Big Ben (Elizabeth Tower to be accurate) comes next. 1×2 Palisade or Log bricks are ideal to suggest the continuation of the Houses of Parliament while the tower itself uses 1×2 bricks with Grille. The new printed brick is a much more elegant  option than a printed round tile would have been in my opinion. The hint of gardens suggested by Olive Green round plates is a nice touch. 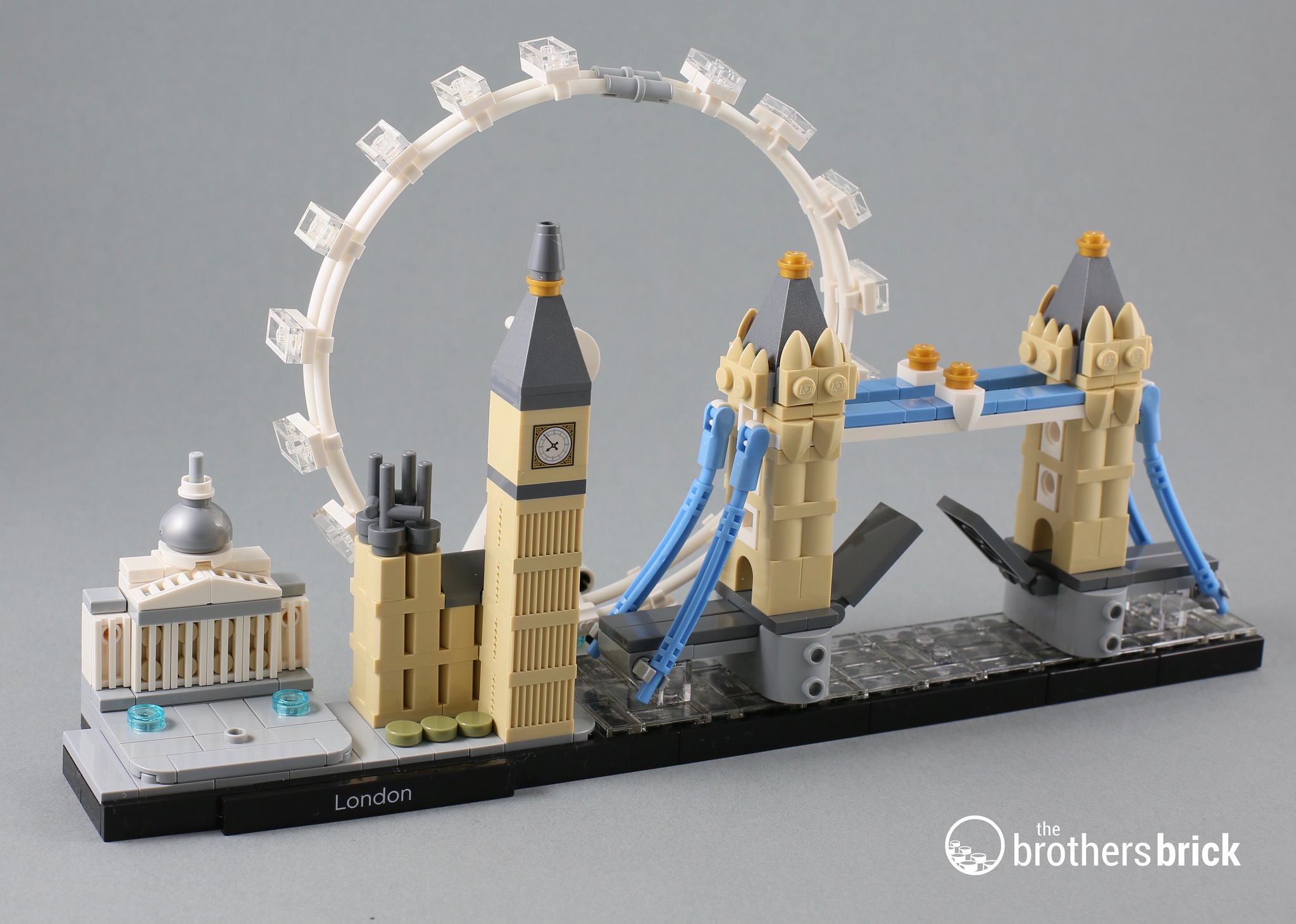 Lastly, Trafalgar Square gets its fountains and Nelsons Column. I like this little structure as it is definitely a London landmark and compliments the National Gallery. A spare ‘Nelson’ is provided in case you lose one. 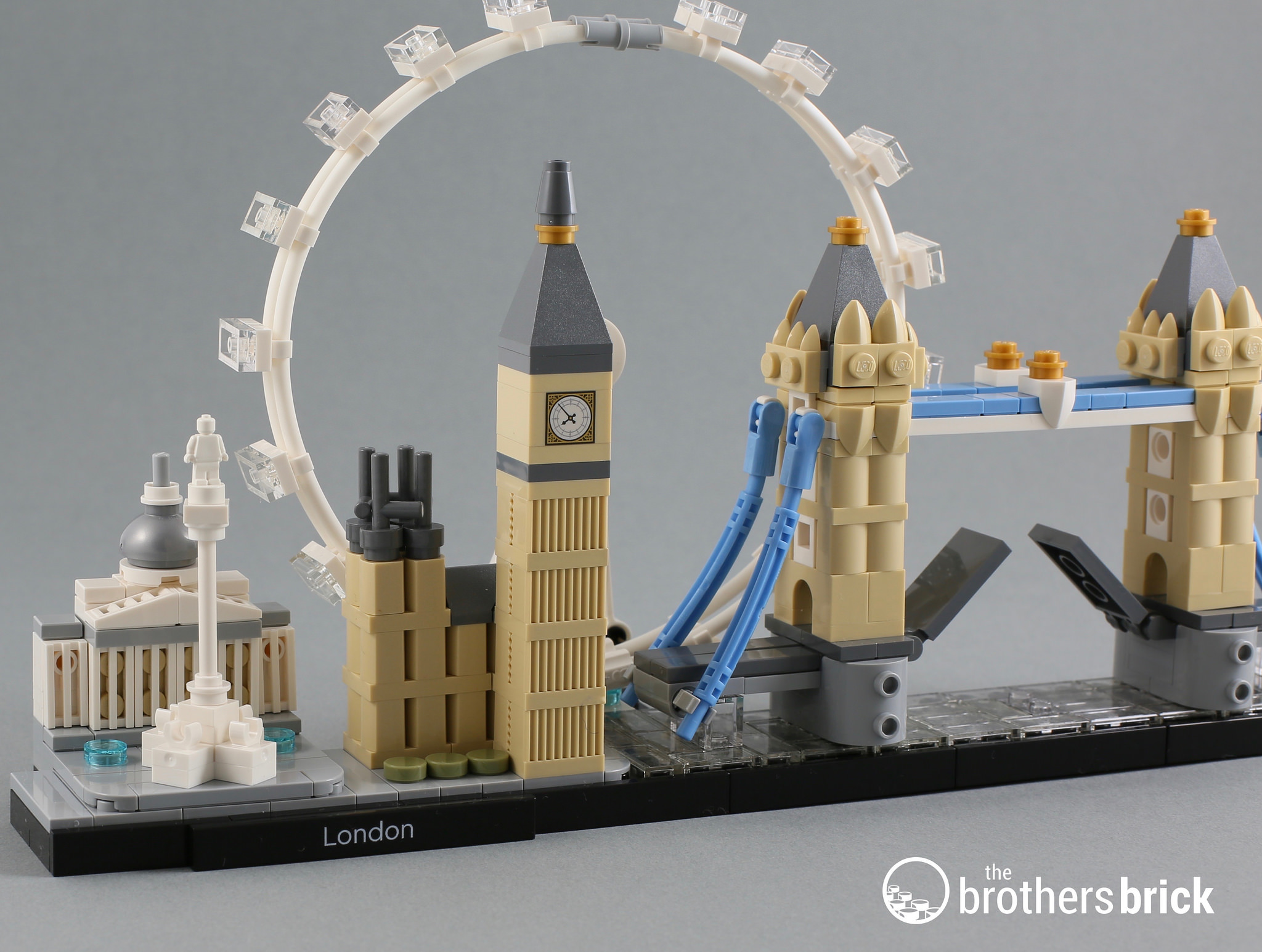 The completed build is really very attractive with nice details, aesthetic colour palate used and a good selection of London landmarks. The Medium blue as a highlight colour on Tower Bridge really makes this model stand out. The only slight negative for me is London Eye; I feel the 3mm rods do not quite form a sphere without the support from a further ‘spoke in the wheel’. This ‘squashed London Eye’ was a feature on the display model in the new Flagshop London store in Leicester Square so I’m reassured it is not my building technique. I wouldn’t let this detract from the overall model as it is by far the best model in the skyline series thus far. 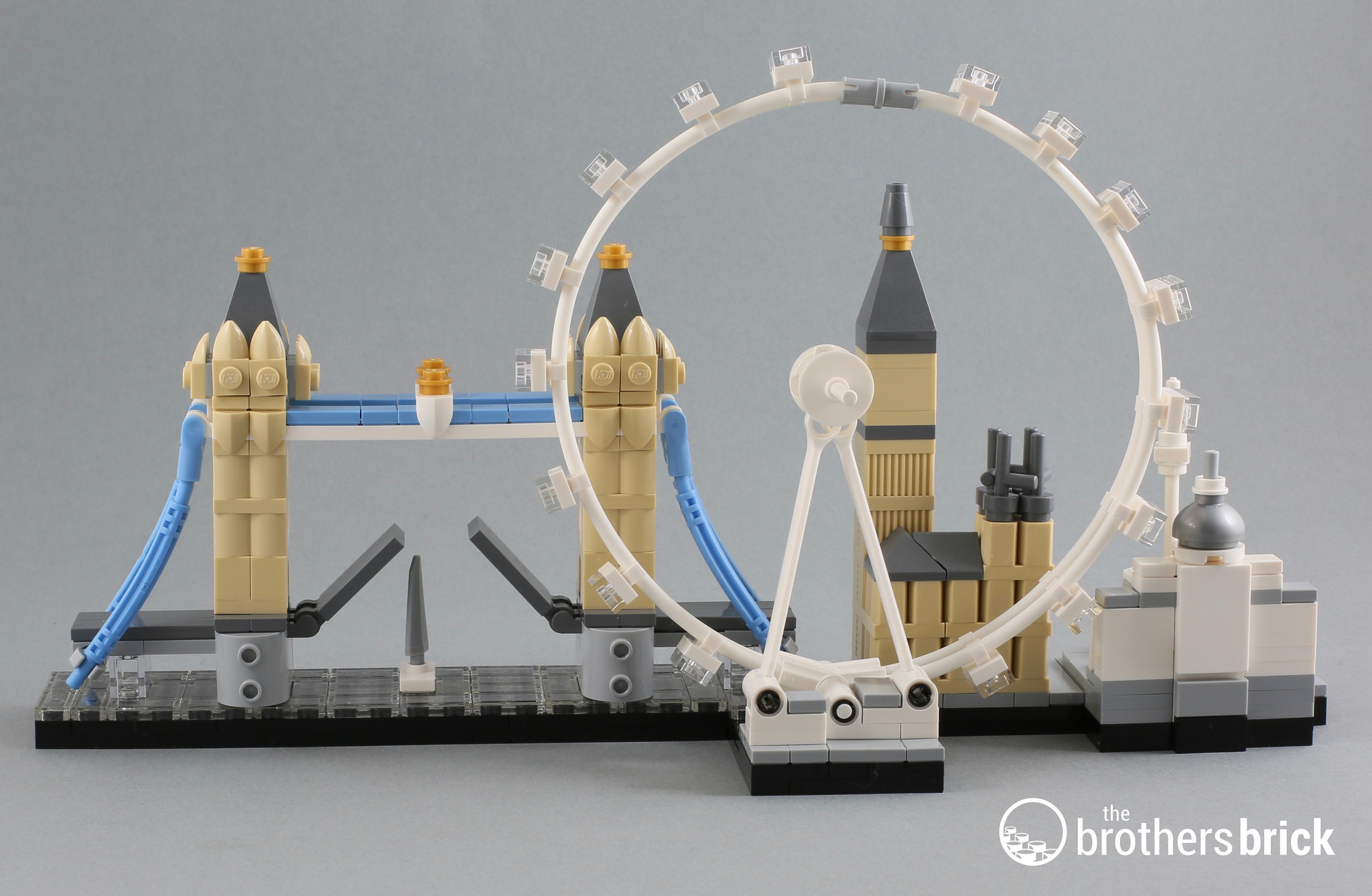 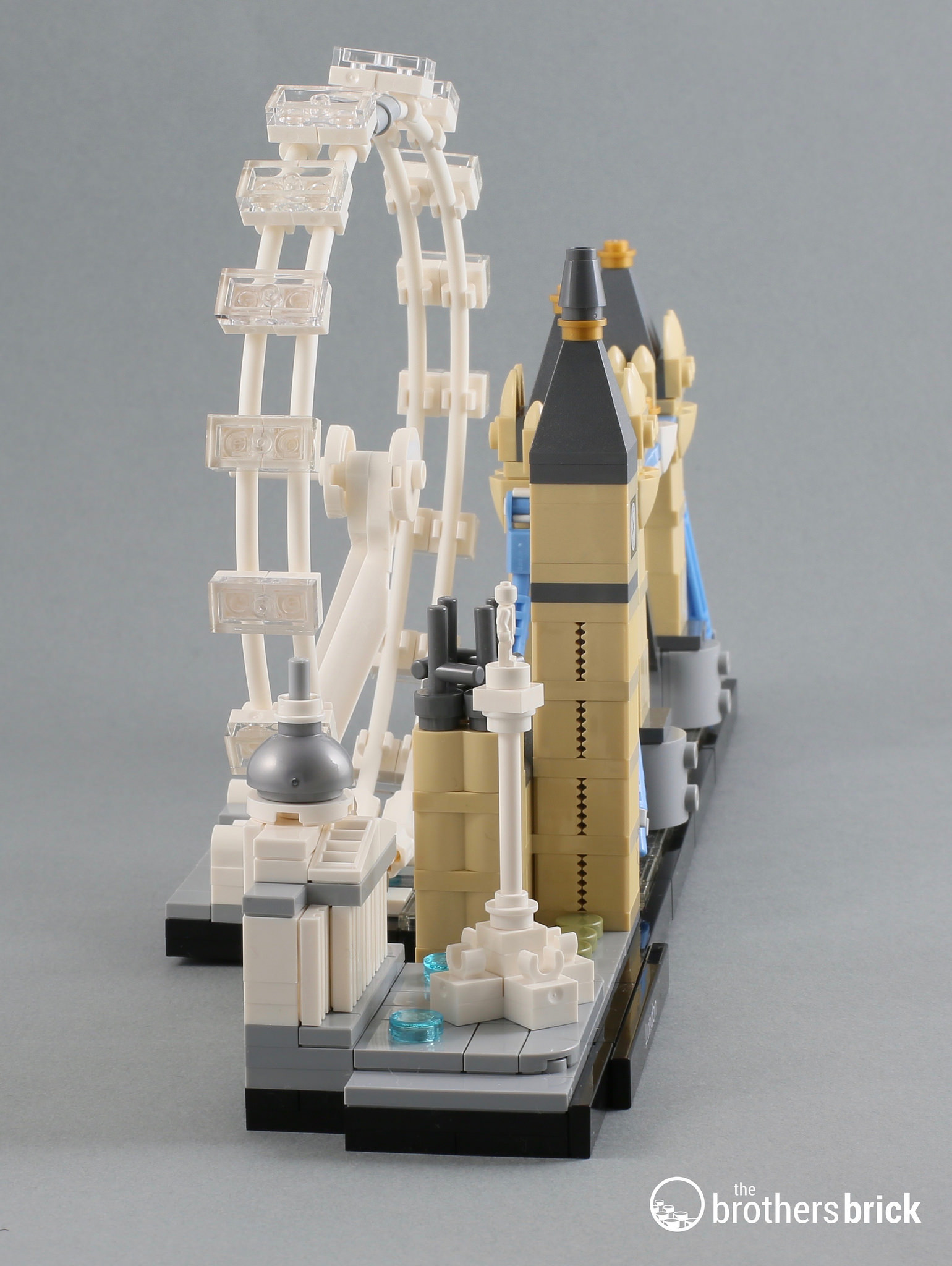 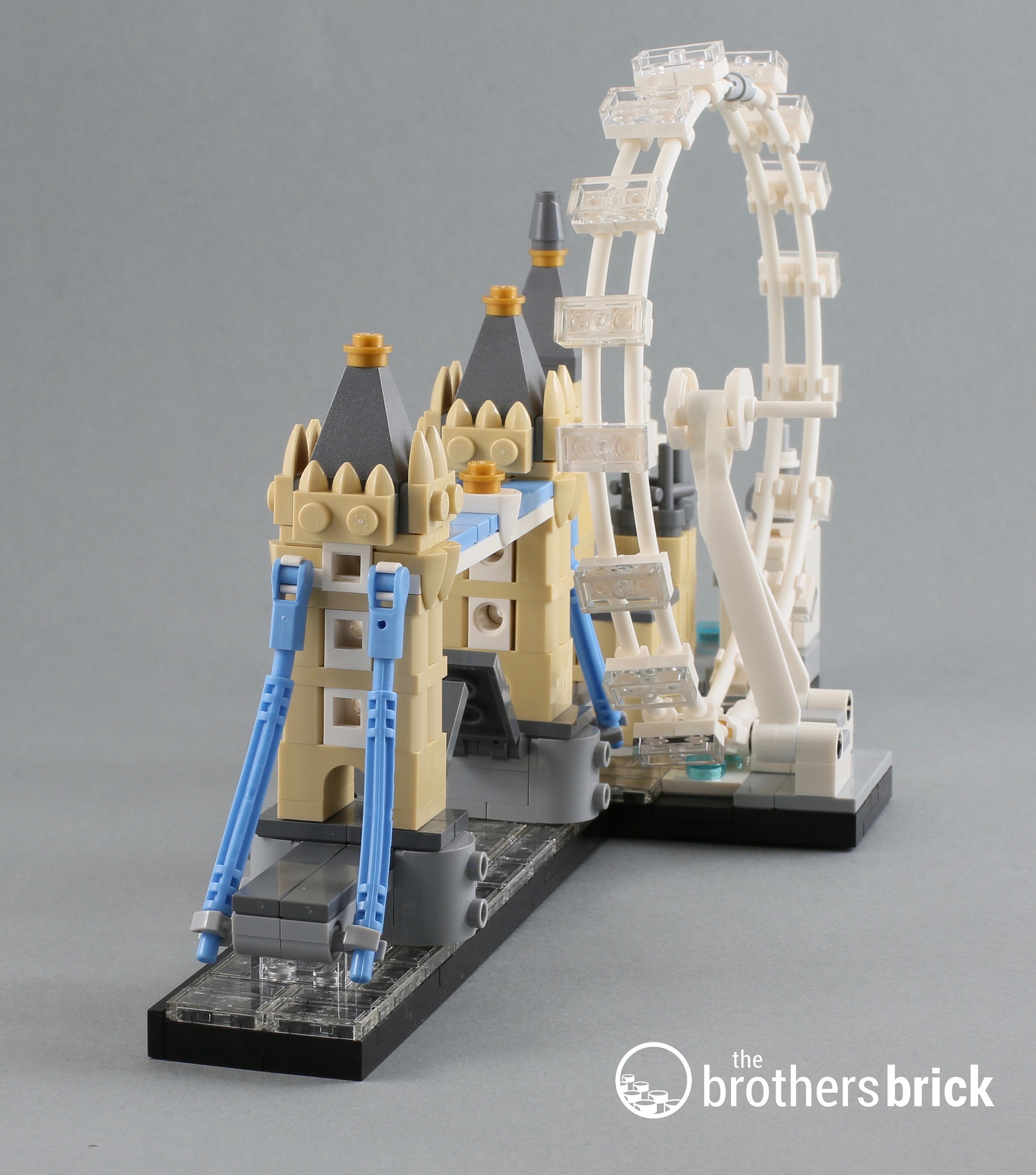 London is a hot spot for tourists and this set will undoubtedly be popular as a souvenir as well as a set for more regular LEGO fans.

As with all of London builds and events, there is a period of clean-up required at the end of the process. London skyline does come with a few spares including a back up Nelson. 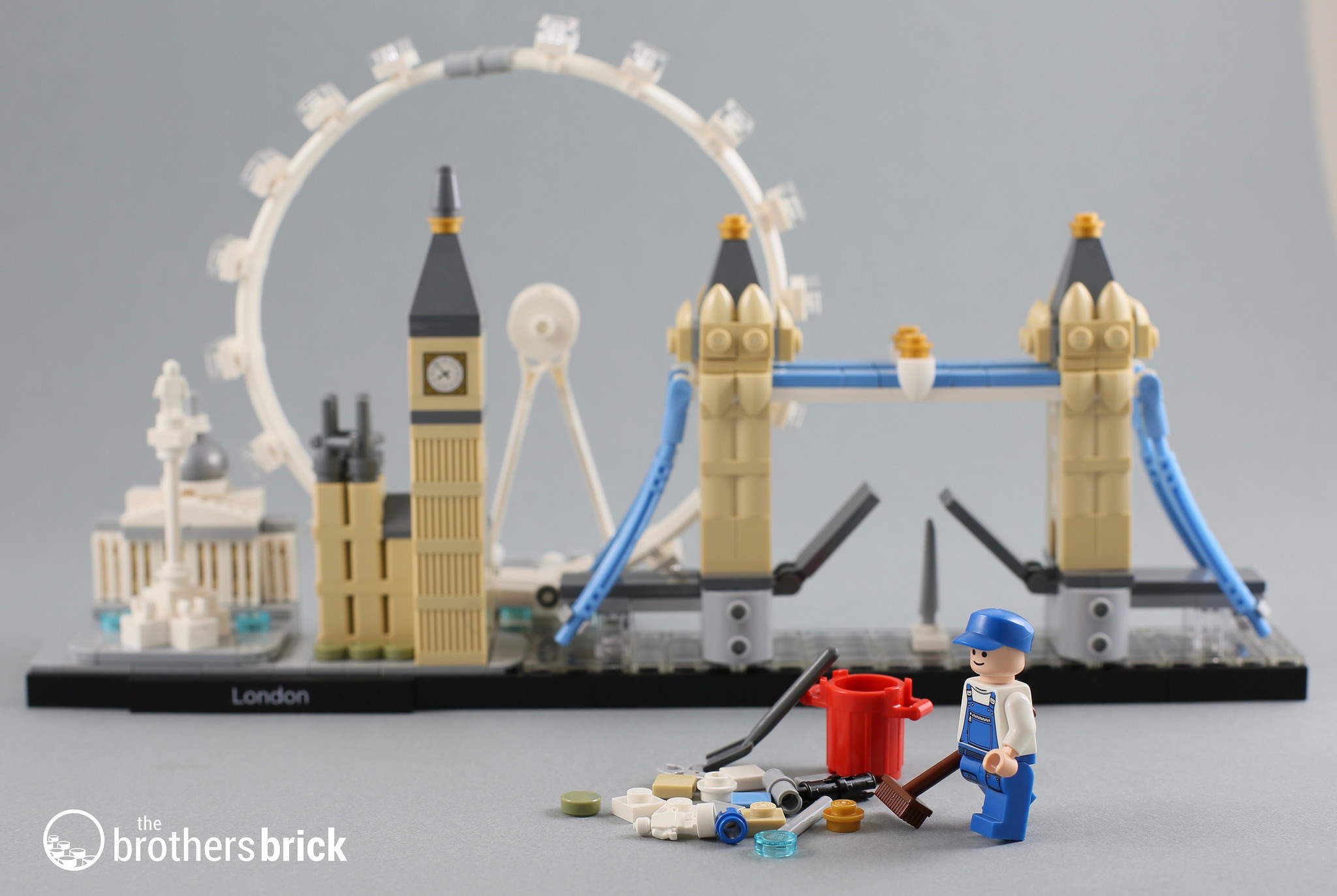 The LEGO Group kindly sent The Brothers Brick a copy of this set for review. Providing TBB with products for review guarantees neither coverage nor positive reviews.