It’s about a week till the general release of the latest Marvel superhero movie Doctor Strange. The plot of the movie still is a mystery, so the LEGO set 76060 Doctor Strange’s Sanctum Sanctorum is a perfect chance to get a hint at what may unfold on the big screen. This medium-sized set was released in August and was marked as a limited offer both in the US and Canada. The set contains 358 pieces and 3 minifigures, for the price of $29.99. 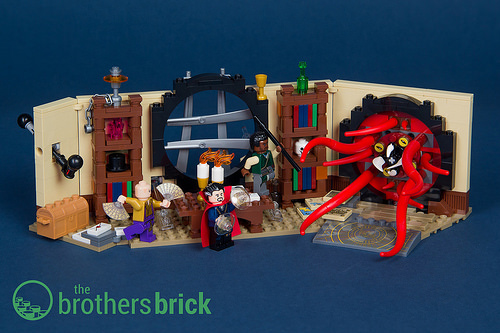 There is nothing special about the box’s design (except for Doctor Strange logo). The front side depicts a severe battle with an alien creature, while its back illustrates the sets playability. Inside the box are three medium-sized bags with roughly equal amounts of parts in each, plus a dark tan 8×16 plate, 2 instruction books and a sticker sheet. 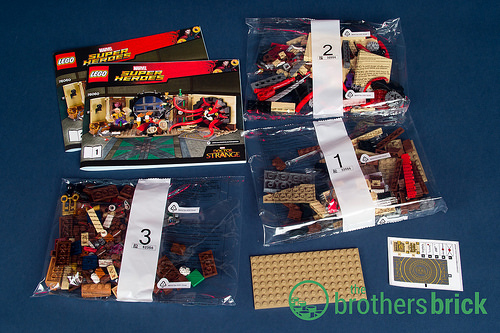 LEGO’s Marvel minifigs are always aesthetically pleasing, so the figs in this set will be an awesome addition to any LEGO fan’s collection. There are three of them, depicting the main heroes of the story: Stephen Strange (Benedict Cumberbatch), the Ancient One (Tilda Swinton) and Baron Karl Mordo (Chiwetel Ejiofor). The first thing that catches your eye is how colourful the designs of these figs are, especially with their use of purple, chrome gold, dark blue, and dark green. 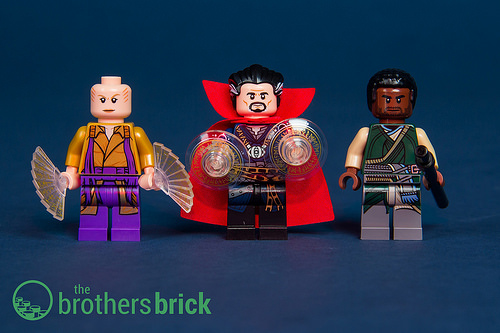 It’s hard to compare the minifigures’ outfits and accessories with those from this as-yet-unreleased movie, but a couple of trans-clear hand fans and 2×2 dishes with tiny golden writing on them look really great. The amount of small detail on the torsos, hips and legs is pretty mind-blowing, including the Eye of Agamotto (the amulet that Strange uses to dispel magical illusions) and, of course, the Cloak of Levitation. I can’t help falling in love with the adorable chubby minifigure of Benedict Cumberbatch; his little determined face is just gorgeous. Not surprisingly, all the heroes have prints on their backs as well. Each of them looks cool, but nothing special. 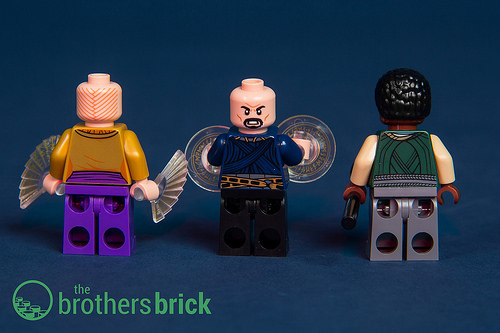 Before jumping to the main part of the set — the apartment and that weird “octopus” on the wall — let me remind you, that all three characters are fighting evil together. I was surprised to find out that both Strange and Mondo are being trained by the Ancient One, so together they’re kind of a team. The only antagonist in this scene is the creature. 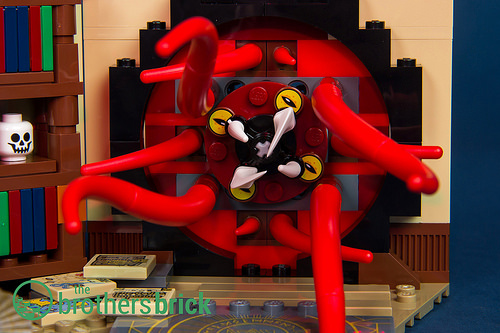 The place where the battle unfolds is Doctor Strange’s “Sanctum Sanctorum” — his personal shop that he sets up in New York. It is represented by three tan walls, 40 studs long in total. Thus we have a nicely arranged diorama, which does not look cluttered, and has a bunch of useful accessories. The main pieces of furniture are two tall bookcases and a table which are rather unimpressive due to their oversimplified design. In contrast, a round window in the centre of the diorama is particularly appealing. Not only is it neatly integrated into the wall, but also features an awesome use of silver propeller blades. Four of them form the iconic seal of Vishanti — the symbol of the school of magic in which Doctor Strange is taught. It’s not 100% accurate, but still looks pretty impressive.

The back of the diorama is not that fetching, but reveals it’s structure. Here you will notice that the set is a fine source of 1×2 reddish brown brick with grill parts, and also find the set’s main play feature — a simple mechanism that allows you to rotate the alien’s tentacles. 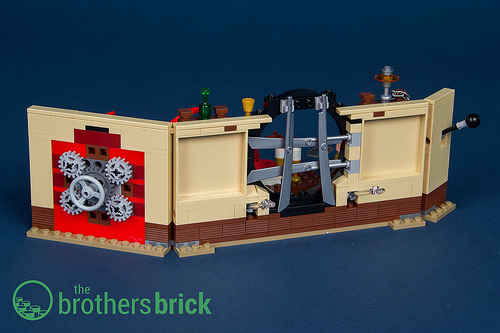 Talking of that creature, it’s actually another character from the Marvel universe. The nasty foe is Shuma-Gorath, a demon with a terrifying list of abilities among which are immortality, reality manipulation, and teleportation. In other words, you’d better think twice before inviting it into your apartment. Despite being a demon, the brick-built Shuma-Gorath is totally cute. Those eyes, which are printed 1×1 tiles, are simply charming, and his tentacles were created for giving hugs, as Jar-Jar can confirm: 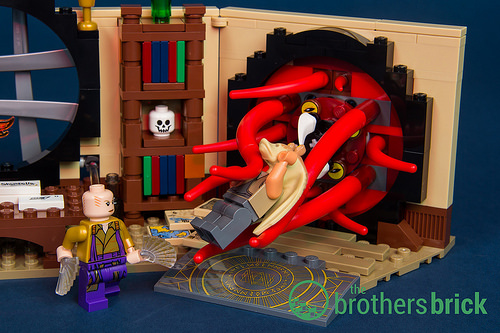 By the way, the length of the tentacles do not allow you to rotate them 360 degrees. Instead, by rotating a wheel on the other side of the wall, you can make them grasp something tightly. It works pretty smoothly and offers a nice play experience.

The central part of the apartment is full of tiny accessories. A couple of candles on the table, a magician’s hat on a shelf, a gold treasure chest and many more create a rather mystical atmosphere. The minifigures look great placed in the centre of this scene. 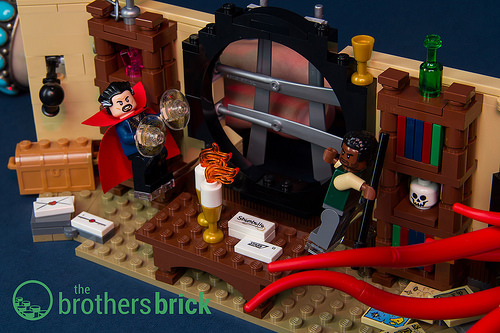 Among other accessories are white envelopes. I mean, a ton of envelopes. They’re placed all over the diorama, and are represented by 1×2 and 2×2 white tiles with stickers. It’s a pity these are just stickers, otherwise we could have gotten a bunch of new pieces from this set. Nevertheless, examining them is quite entertaining. For instance, here’s one from Stark Industries, which gives a little hint about Doctor Strange’s connection with the Avengers.

Even though I’m not a big fan of stickers, the ones in this set are excellently designed. On the other side of the diorama there are some maps lying on the floor: two of them are printed and two are stickers. And, of course, here’s the largest sticker of the set placed on a 5×8 dark grey curved slope. Tiny symbols in gold look amazing on dark grey. 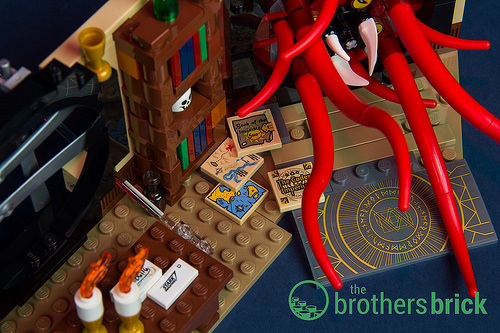 Another minor feature of the set is a pair of transparent bars with 1×2 plates on ends. The way they’re placed allows you to control their positions by pressing the other end of each bar behind the wall. As the result, the main characters can levitate! I won’t say it looks impressive, but it’s still a nice addition (assuming the characters in the movie screen levitate a lot during the battle). And then there’s the set’s last function — a strange looking ball on a Technic axle. As the box shows it, you can put Strange’s cape on it and move it up and down. I guess it’ll make more sense once we’ve seen the movie! 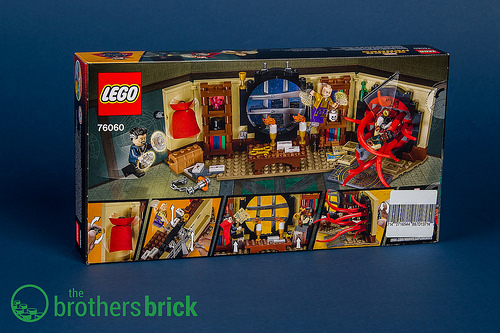 This set is quite unique in many ways: it’s the only set devoted to the upcoming Marvel movie, it was released 3 months before the movie’s release, and it’s a superhero set that includes no jeeps or jets. We still don’t know much about what is actually going on in this scene, but trying to evaluate it from the LEGO fan’s point of view I can hardly remember any set as unusual as this one. I can clearly see that it is not targeted at children of 8-12 years, but rather at adult fans; the set will look cool on a shelf in your living room, and the minifigures are a perfect addition to your collection.