The new animated show Star Wars: The Freemaker Adventures has only gifted us with two sets, despite being a TV series based on LEGO. Those sets are the 75145 Eclipse Fighter and this, the 75147 StarScavenger. This sets portrays a vehicle used in the show to collect space salvage. The first time we see it is during an X-Wing / TIE Fighter battle as it flies around scooping up debris. 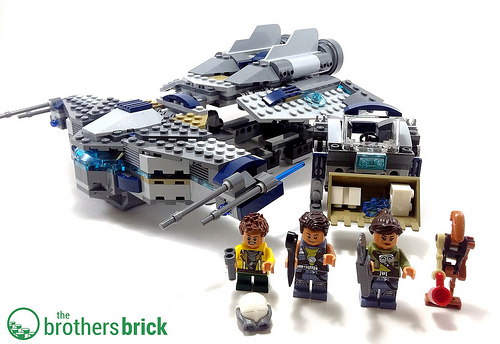 But how does it translate into LEGO?

Starting off with the build and it’s not a particularly exciting one. There’s no real innovative building techniques and most of the set is mirrored. If you decide to pick this set up, skip ahead in the instructions and build both sides simultaneously, you’ll save yourself time and unenjoyable building. Once it’s done you get a moderately-sized set that looks very respectable as a space freighter or otherwise utilitarian spacecraft. What you build is divided into three parts: a forward cockpit, a hollow containment area for storage, and a mech. 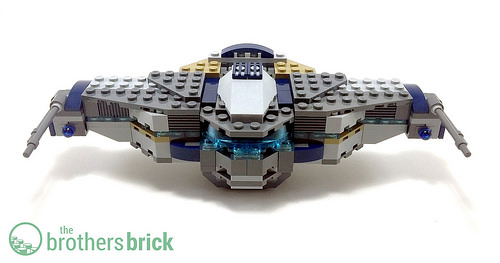 The cockpit, complete with “wings”, is probably the best part of the set. It looks great, walking the fine line between futuristic machine and tough workhorse. Inside the cockpit you’ll find a small printed console piece and enough room to fit two minifigures. It’s a bit tough to get them in but it’s far-removed from the puzzle you needed to solve every time you wanted to get two figures into the cockpit of the 75105 Millennium Falcon. 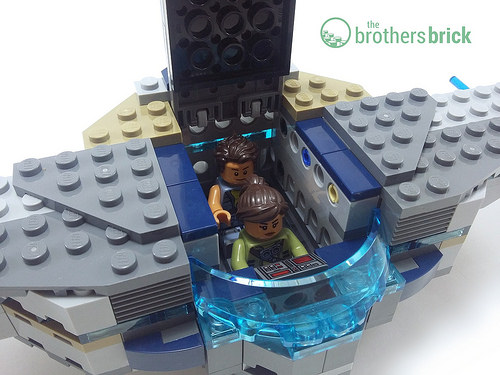 On either side there are some bulky extensions ending in weapons clusters. There are faux lasers which conceal one of the spring-loaded shooters. Like the 75050 B-Wing the long blaster bolts stick out with no attempt made to conceal them. This is bad both for display and for play as it’s unsightly and prone to being fired by mistake. I may or may not have shot myself in the head in the process of writing this review. The weapon clusters can rotate on an axis like a wheel, but nothing more than that.

The real drawback of this section is the completely flat back where it connects to the next section. It’s made even worse by the abundance of open technic pin holes. What connects to this is the much bulkier back section, which in this context is comparable to the load bin of a truck, although in this case removable like a trailer. Regardless, this is the set’s biggest problem and the most disappointing aspect. It’s a glorified hollow box with some wings stapled to them. I am not exaggerating. 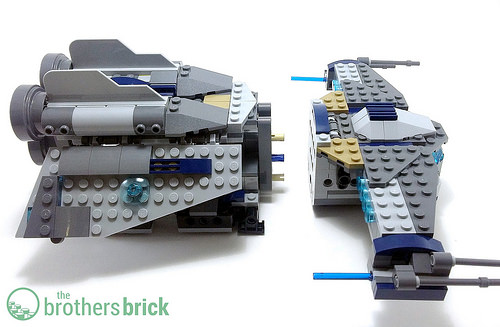 There is a base with two-wing build, connected with Technic lift arms. The two wings can be connected with an exposed pin and axle but, at the end of the day, it still resembles a box awkwardly coupled to the back of a spaceship. The base has a hollow bottom where the mech-slash-walker can slot into. In the show, the mech’s front scoop pops out the bottom to collect salvage mid-flight. This is technically possible with the LEGO version, but the scoop is too small to pick up anything substantial.

And that leads to another problem with this section: its size. I know LEGO has drastically shrunken the scale of this ship in relation to minifigures and how it appears in the show, but this is just too small. I know cost was a big factor here, but not being able to store anything in the back of this craft is a real let down. This gets even worse when the mech is inside of it and takes up pretty much all the space. 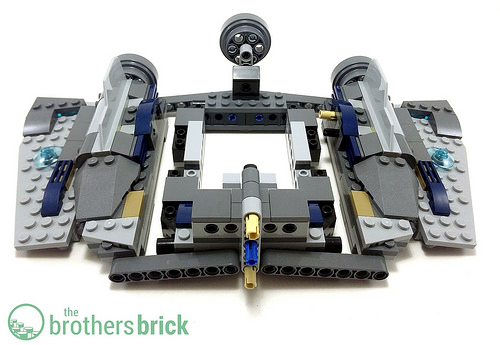 The best part of it is the design of the engine pods, which use the new winglet pieces we first saw in 75150 Vader’s TIE Advanced vs A-wing Starfighter. Those, along with the moveable wings and adjustable tail pieces, are okay but again feel strange on this boxy build.

The final build is a very small mech which seats one driver and comes with a scoop in the front to pick up salvage. There’s not much to say about this other than it looks pretty good for the number of pieces dedicated to it, but includes some strange design decisions such as anorexic legs and a scooper which doesn’t touch the floor. It fits nicely into the back compartment of the ship and stays there without any connections. You can swoosh the whole build around without fear of it falling out. I may be giving this feature undue credit because I’m a sucker for mechs and mech transports, but it’s my review and I’ll love mechs if I want to! 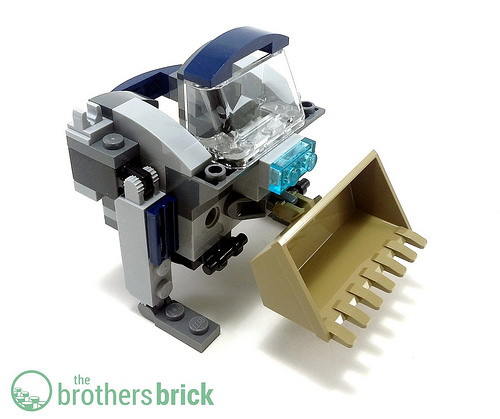 The three minifigures are an absolute pleasure. The printing of these really does convey the fact that they are scavengers and the shiny silver printing on the metallic pieces is crisp and detailed. Unlike most of Star Wars’ minifigure lineup, I suspect these will be used for MOCs and in other ways. The prints can work in almost any setting and the uniquely coloured skin tones will be welcome to those looking for some variety in their cities. The only letdown is the lack of double-sided faces. All three regular minifigures have hair pieces long enough to hide a second face, so I don’t see why extra faces were not included. 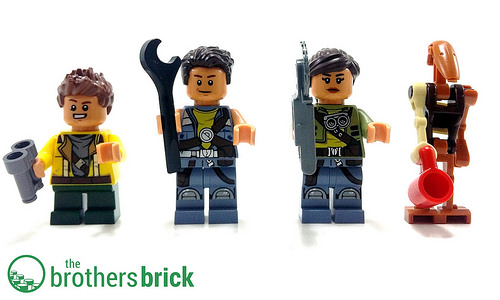 The decommissioned battle Droid is the same build that has always been used for LEGO’s rendition of the robot, but with mismatched colours to simulate age and rust. This droid is only a letdown because the 1×1 tile on the back does not have the Freemaker’s logo (which adorns the rest of the ship) even though it is clearly marked that way in the show. A nice print on that tile would have been welcome.

Speaking of that very marking, this set is thankfully light on stickers. There are only three of them and I truly believe you’re missing nothing by leaving them off. Like the minifigures, I think the wrench icon stickers will go great in a lot of circumstances, if you like to use stickers. 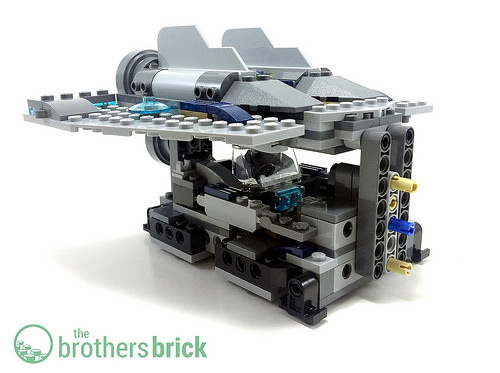 Finally, let’s talk price and value. At $49.99 | €59.99 | £49.99 and 558 pieces, it’s very reasonable when looking at price per piece alone, especially for a Star Wars set. I think this price, combined with the relative scale, was a clever move by LEGO to allow kids to get the toys that appear in the show. But should you buy this set? You’ll need to look at the recoloured and special pieces and the minifigures to see if it’s worth it for the parts, but I don’t think it’s a must-buy for display or play. At this price there are a ton of other sets with more play features or a better looking build. Your love of Star Wars and spaceships will have to be what sways you! 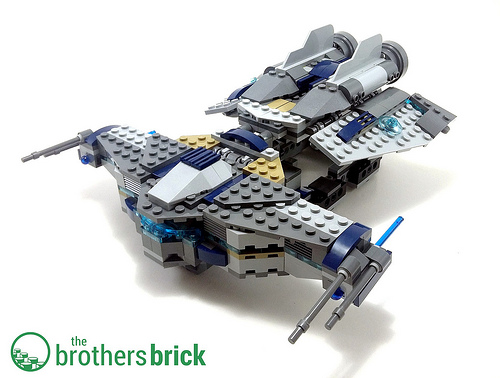 LEGO sent The Brothers Brick a copy of this set to review. Providing TBB with products for review does not guarantee coverage or a positive review.