TBB contributor Elspeth De Montes has been working on a fantastic series of scenes contrasting the life of a woman named Doris in 1966 and later in her life today, in 2016. Originally built for and published in Bricks magazine, Elspeth’s scenes are not only well-built LEGO creations, but also poignant and funny. She describes her Doris series thus: “On the left it is 1966 and she is a young vibrant lady in touch with the latest fashion, technology and trends. On the right, time has passed and it is 2016 and Doris has to cope with new technology, innovation and the changes in society.”

In Elspeth’s first scene, Doris happily tosses her rubbish out in 1966, but struggles to sort her recyclables in 2016. What impresses me most about this scene is how many LEGO trash cans in various colors Elspeth owns!

“Reception” has gained a very different meaning in our technological lives over the past 50 years. 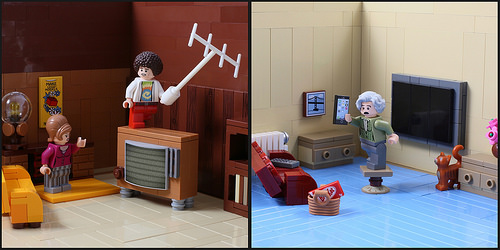 I’m totally with Doris on this one. Segways are for giant nerds and drones are for jackasses.

I’m going to posit that Doris’s weight loss regimen is much more effective in 2016 (with Wii Sports) than it was back in 1966 (with one of those jiggly band things that actually didn’t do anything). 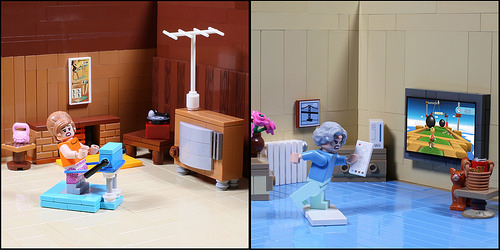 A full English breakfast in 1966 consisted of a side of bacon, eight sausages, a dozen eggs, one loaf of bread with a jar of marmalade and another loaf with a can of Heinz beans, plus some mushrooms and tomatoes. And tea with whole milk, and sugar, of course. I’m not sure what’s going on in 2016, but I’m as terrified as Doris seems to be… 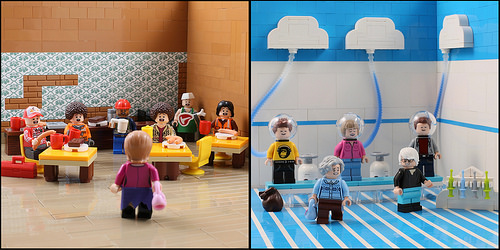 In Elspeth’s final scene, in which Doris gets her oats, we see our protagonist finding love in both 1966 and 2016.