The German-language LEGO Star Wars forum Imperium der Steine is hosting its annual “MOC Olympics” at the moment, and with the release of the full trailer for Rogue One this past week, we’re seeing a lot of great entries inspired by the forthcoming movie. TBB regular and all-around talented builder Cecilie Fritzvold has recreated the mysterious character Chirrut Îmwe in LEGO, centered on the scene in which he battles Imperial Stormtroopers with nothing more than a staff. 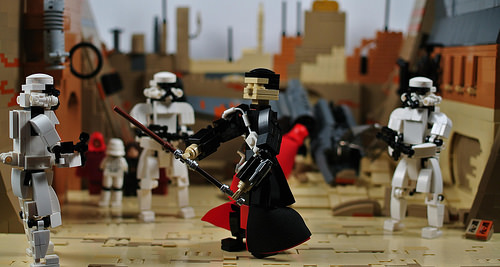 Cecilie says that she created the Stormtroopers first, since she thought they might be the hardest. Creating enough detail on the troopers’ helmets to make them recognizable at this scale is no small feat. Cecilie completes the scene with some solid forced perspective, including a minifig-scale Stormtrooper in the background (though she gives him taller legs to bring him into the same shape as the brick-built ones in the foreground).