The new 2016 Ghostbusters movie is due to hit cinemas in the next few days, with the Hollywood première on Saturday. As I mentioned in my review of LEGO’s new Ecto-1 set a few weeks ago, I was not impressed by the movie trailers, but I do quite like that the main characters in the reboot are women and I also like the new version of Ecto-1. 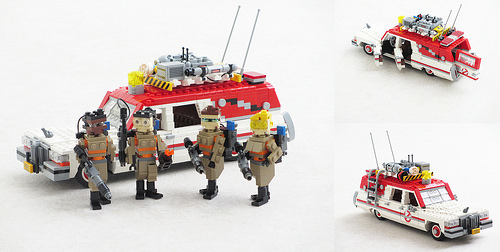 It will be no surprise then that I’ve built my own version as a new addition to my movie vehicle collection. Among fans of the original movie there has been a backlash against the female leads, but having built more than 50 movie vehicles and the actors in the last few years, I think it’s a bit staggering to see how so few movies seem to have female characters as anything other than sidekicks or eye candy. I also know that some fans of the original movies don’t like the idea of a reboot, but from poring over pictures of the new car, I think it’s obvious that whoever designed the car at least is a fan of the original movies too. Sure, it is an eighties Cadillac rather than a classic big-finned 1959 model, but nowadays a 1959 model is exceedingly rare while an eighties car isn’t worth much. It is pretty much the perfect choice. Its roof-mounted equipment also owes a lot to Dan Aykroyd’s ideas for Ghostbusting technology used in the original movies. I don’t have a vested interest in whether the movie is any good, but the car is cool and I loved building mine and the figures to go with it.

As a reminder, if you’d like a chance at getting your own copy of the LEGO set for free, you can still enter our giveaway.