The long-awaited third Ghostbusters movie is due to première in about five weeks. The first trailer quickly became the most disliked movie trailer on YouTube and the second trailer strikes me as particularly unfunny too. Oh dear. Of course I’ll have to withhold judgement on whether the movie is any good until after it hits the discount DVD bin. And this is not a movie review site, of course, but there is at least one interesting thing that has already come out of this movie so far: a brand-new LEGO set, 75828 Ghostbusters ECTO 1 & 2. 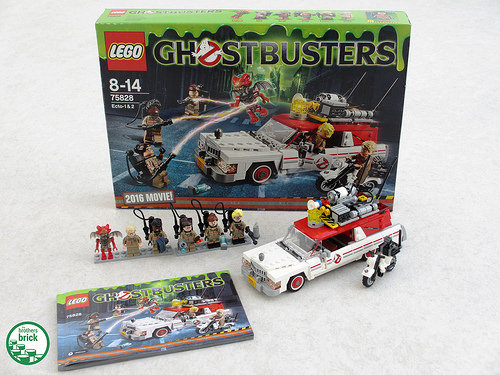 The set was announced in February, is due for release in the Summer, and will retail in the US for $59.99. The goodie bag I received during my recent trip to Billund contained an early release copy of this set, which gives me the opportunity to review it.

Unlike the box for the LEGO Ideas ECTO-1 set that I reviewed two years ago, this set has a regular box. The instruction booklet also has a normal cover instead of the slightly stiffer cover used for the LEGO Ideas ECTO-1 set, which suggests that the new set is not so much aimed at collectors. Like the ECTO-1 booklet, this one does have short descriptions of the characters, which, given that they are new and largely unknown, is handy. 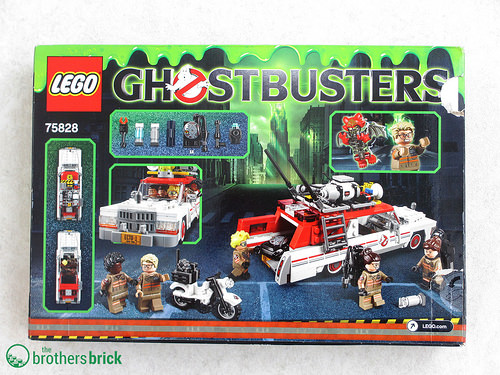 Besides the booklet, the box contains four numbered bags of parts, with a few smaller bags with small parts inside them, and a small sticker sheet. Nothing unusual. I don’t think it contains an awful lot of new parts, other than several new black 1×1 round tiles and a grand total of 8 white 2×2 wedge plates, but there is plenty of other useful stuff such as grey and white brackets and brown jumper plates, for instance.

Being a fan of movie cars, I had seen pictures of the new ECTO-1 before building this. When the original Ghostbusters movie was shot, the 1959 car they used was more than 30 years old. The car for the new film is also more than 30 years old: a very boxy-looking eighties Cadillac hearse. At a first glance, this would seem like an ideal car to render in LEGO, but there are a few things a bit off about the model. The 59 Cadillac had rounded and smooth sides, recreated using curved elements. Essentially the same construction was chosen for this new one, even though the real car is far more slab-sided. The red stripes and the chrome trim on the sides are printed onto the elements, as are the Ghostbusters logos on the doors. This is preferable over stickers, but unfortunately the prints don’t all line up properly, making the lines a bit wavy. The front of the car looks very good, with a clever combination of headlight bricks used to model the actual headlights (!) and the indicator lights underneath. There is a neatly printed “New York ECTO-1” license plate under the huge radiator grille. It looks very imposing. 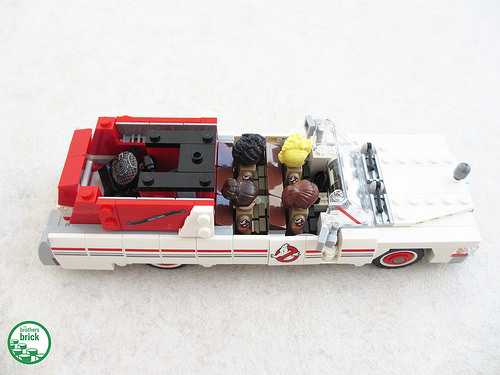 Unlike the older model, the front doors on this one can opened. This adds a neat play feature. There’s room for two figures side-by-side in both the front and rear seats, again, unlike the Ideas set. Despite these doors and the space required for the minifigs, the base of the car feels rock-solid, thanks to the use of strategically placed brackets. Even with the roof removed, it doesn’t really flex. The rear door can also open, but because of the space taken up by the construction used to support the roof, there’s little room inside. Building all the doohickeys and thingamabobs on the roof was a lot of fun on the original vehicle and it’s fun on this one too. The construction is clever, with barred doors used for the roof racks and all the doodads attached to those using clips. The roof can be removed in two sections, for easy access to the interior. A few stickers are used to add more details, but the model wouldn’t look terrible if you were to leave them off. One funny detail is that one them reads: “Warning, parts may fall off”. Yes, but only if this were a competitor product. 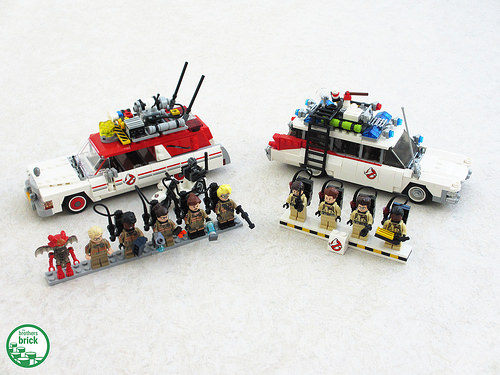 The car is about the same size as the original ECTO-1, which makes it look awfully big with the figures standing next to it. This is the price you pay for all the play functions and the details. Ecto-2 is the motorcycle. It’s basically the standard motorcycle you get in City sets, with a Ghostbusters sticker on the front mudguard and some hoojamaflips on the back. It’s nothing too special, but adds to the play value of the set. It’s also massively oversized for a figure, but that makes it fit with the car.

The set comes with six minifigures. The five human characters are, from left to right in my pictures, Kevin, Patty, Abby, Erin, Patty and Holtzmann, with the latter four being the actual Ghostbusters and Kevin being the receptionist. I quite like the notion that Ghostbusters in this new movie, some of whom are scientists, are female characters and that the receptionist is male. I also suspect that the Patty figure, representing the character played by comedian Leslie Jones, is the first African-American female to be rendered as a minifigure. If I’m wrong, I’m sure somebody will enjoy pointing this out in the comments. 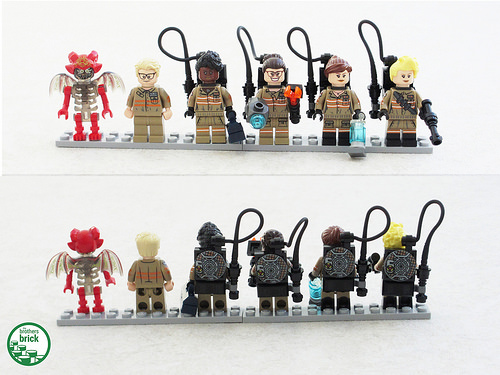 According to the booklet, the 6th figure is Mayhem, an entity from another dimension who likes to have fun. The human figures are well done, with just about perfect hair pieces and torsos printed on both sides, printed legs and arms with surprisingly crisp printed Ghostbusters logos. Two of the ladies wear boots, with the lower parts of legs molded in black. All of the Ghostbusters have slightly different torsos with their initials tagged on the front and something that looks like a piece of tape with “Kevin” written on it for the receptionist. This is mere speculation, but I suspect that, at some point in the movie, the receptionist dons a spare Ghostbusters uniform with an improvised name tag and jumps on the bike to go to the rescue. 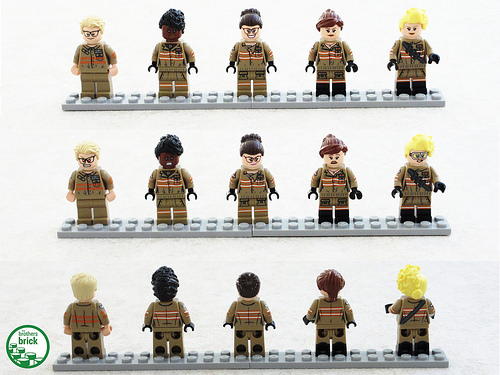 The heads have two faces, so that you can swap expressions. Kevin’s face offers an actual plot spoiler, because the red eyes one of his two faces suggests that he will become possessed at some point in the movie, probably after coming to the rescue. The Mayhem figure uses skeleton parts for the body and limbs and has weird transparent black wings, with a print on them, but this is probably the norm for beings from other dimensions. Again, I’m speculating. There are a fair few accessories with the Ghostbusters figures, including large proton packs with printed parts (I’m assuming that’s what they’re still called in this new movie). These can go onto the figures’ backs, attached to minifig neck brackets. The figures also carry various gizmos in their hands. One drawback of all this is that they are very unbalanced and won’t remain upright unless they’re attached to minifigure stands or some plates. Those sadly don’t come in the set, which means that you’ll have to add your own if you want to display them.

Despite the waviness of the lines and the slightly odd curved sides, the car is detailed, has funny whatchamacallits on the roof and it looks the business. From what I’ve seen of the movie and in the booklet, the figures are pretty good representations of the characters; certainly good enough to be recognizable. The set also seems to have a bit more play value than the older ECTO-1 thanks to opening features. 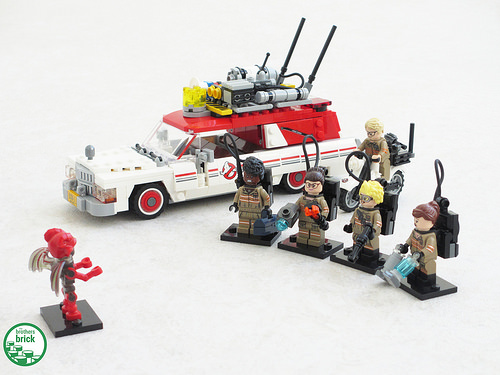 Ultimately, however, I suspect that whether this set is a success hinges on whether the movie is any good. I don’t have the same connection with this that I had with the older ECTO-1 set, and even if the new movie is far better than the trailers suggest, it will not stir the same nostalgia in me that the original does.