A pillar of the classic LEGO Space community, Mark Neumann has emerged from myth and legend to bring us Universal Explorer LL2016. This 11-foot-6-inch behemoth of a ship is complete with giant guns, a science module, a motorized ring, interior lights, a huge cargo bay big enough to fit most official LEGO sets, and over a dozen smaller vehicles stored on board. We’ve sat down with Mark to learn a bit more about this incredible creation and Mark’s journey to build it. 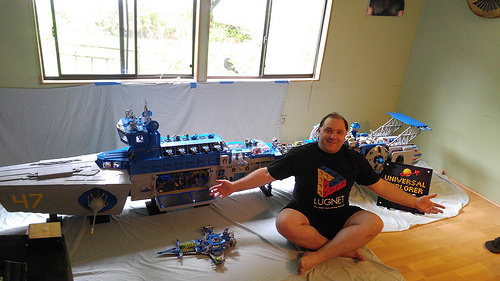 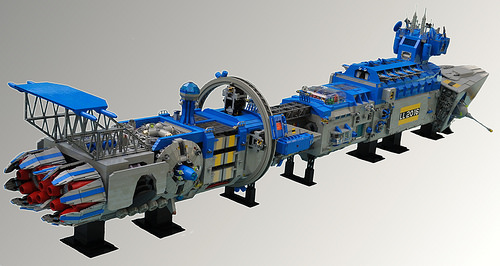 The Brothers Brick: Mark, thanks for taking the time to speak with us. The Universal Explorer LL2016 is amazing!
Mark Neumann: Thanks! I am really proud of this ship.

TBB: Tells us a bit about your Adult Fan of LEGO (AFOL) history.
Mark: I re-entered the world of Lego from childhood around 1999. I was shopping in Fred Meyers and saw Star Wars LEGO. The inner child in me cheered with joy as my partner (not quite wife yet) watched in puzzlement as I scooped up five or six LEGO sets. I spent that evening putting the sets together, admiring the new parts and wondered how soon I could acquire my childhood LEGO stored at my parents house.

Always a fan of the Battletech miniatures war game and the Mechwarrior video games, I set out to build LEGO mechs with the new click hinges. I spent some time honing my LEGO Mecha skills for a while.

Spending a lot of my extra time in research of LEGO builders I surfed LUGNET and Brickshelf. I gathered some courage and emailed a builder to ask some questions. Mark Sandlin turned out to live nearby and he invited me to come with him to a SEALUG meeting.

Many LEGO MOCs were had.

Around 2002, SEALUG started a LEGO fest in the Pacific Northwest. I spearheaded the organization for it. We were tired of going to Washington D.C. for BrickFest and there were quire a few of us AFOLS in the Pacific Northwest region. We would be competing with Bricks West (a now-defunct convention), so we scheduled 6 months opposite of it. When it was conceived it was called NWBrickCon. Today you know it as BrickCon.

Many more LEGO MOCs were had.

After several years—ten or so—I started to slow down. I’ve built a boat load of MOCs, mostly space and mecha. A little burned out? Perhaps. Distracted? Absolutely. I have been refocusing my time on my family. My son has recently become a teenager and this year or next he will be coming to Brickcon along with me with his own badge. But don’t worry—I am not done building. I call my LEGO collection my retirement plan; it is what I plan to do when I retire. 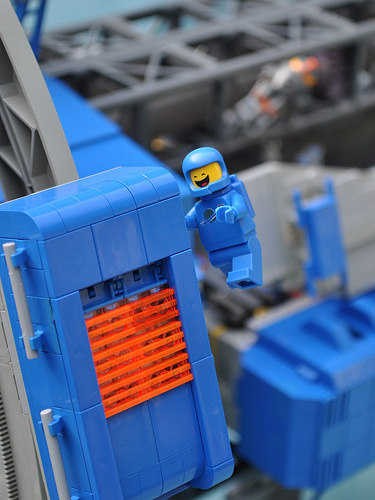 TBB: What was the time frame to build the Universal Explorer LL2016?
Mark: I have been wanting to do another big ship for some time. The idea has been percolating in my brain for a year or so. I started this ship in January. I worked on it when I could, weekends mostly. I have around 120 hours into LL2016. She is done. Mostly. Probably. Let us be honest, I’m going to keep fiddling around with bits on it until BrickCon most likely. Heck, I may make it bigger.

TBB: How long is it, and how many pieces are in it?
Mark: LL2016 currently sits at 11 feet, 6 inches long. I should mention that LL2016 is modular. I could keep adding modules to make it bigger. I could subtract modules and make it shorter. It has well over 15,000 pieces. 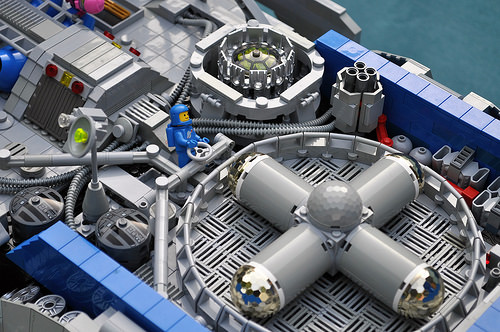 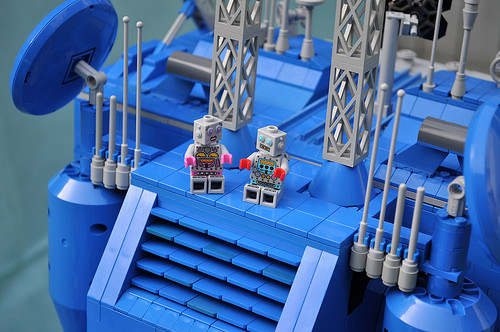 TBB: Did you already have most of the pieces to build this ship, or did you acquire them specifically for this creation?
Mark: One of my goals on this build was not to buy any more pieces. I have a lot of LEGO. I did not meet my goal. I had to buy 1 section of monorail track and I ended up buying some extra pieces. I probably spent around $30 in parts specific for this build. I spent far more on the lights.

TBB: This ship is liveried in Classic Space colors. What draws you to the Classic Space theme?
Mark: I actually just started building when making the SHIP. I had the idea for the front cannon and I was going to light it up. That’s how it started. I did have a napkin sketch of a rough design, but nothing solid. As the ship started to come together I looked at my bins of brick. I had lots of grey and blue. I said to myself, “Right! Classic Space it is!” I have a lot of fond memories of my old Classic Space sets so it was an easy decision to make. 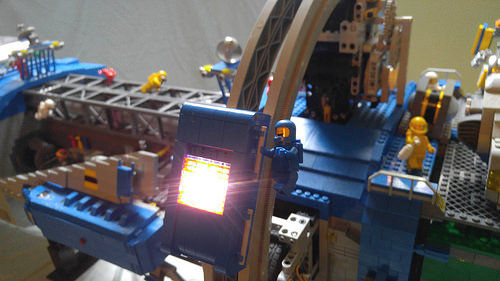 TBB: What inspired the physical design of the ship?
Mark: I let my models talk to me. I like to think I am simply the vehicle to place the bricks together where they need to go. So there is kind of a rough vision and I see where the brick takes me. It is all very emotional. When I get it right and I can see it coming together, I feel really giddy and laugh. I laughed a lot during the LL2016 construction. Wooshing noises too. Lots of wooshing noises. Those are important.

TBB: What features does the ship have? What’s your favorite feature?
Mark: There were several design guidelines for LL2016; no interior, lights, and modularity.
First, no interior. I did not want a model that I was going to spend a lot of time at each convention assembling and disassembling to show off a detailed interior that is hard to get at. I have been there and done that. I have listened to other builders complain about it. So no detailed interior. Instead I would do windows. Visitors can peer into the ship and see what is going on. But beyond the vignettes you can see, there isn’t any interior. 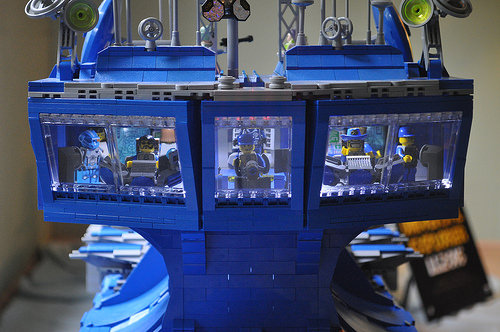 Second is lights. I have interior spaces for visitors to view through windows, and it’s dark in there. I have two different lights for LL2016. I found some simple LEDs from the dollar store. They create a kind of decent ambient light. I also have these little shop lights from Wal-Mart. They have magnetic backs and are ridiculously bright. Those light the cargo bay, bridge, engines, front cannon and miscellaneous windows.

Third is modularity. Around January, I was brainstorming with another AFOL, Roger Hill. We were talking about a modular system for building SHIPs as a community project. I came up with an interlock design for modularity. This was my proof of concept. LL2016 breaks down in to 8 distinct modules: fore/mid-ship/living/science/ring/lander/cargo/engines. I can swap, remove or add sections at will. It also makes LL2016 transportable. This proof of concept kind of works. The interlock is a solid connection method and is scale-able. This design, however, is a little big and gets really heavy fast. It can be unstable if not properly supported. I have a sample interlock as an example to show off with the LL2016. Roger and I are working on another design for modular SHIP building. It has a smaller cross section and I think it’ll work better for multi-builder participation. This will be a topic I think needs discussion with other builders at BrickCon to see the true feasibility of it.

The motorized functions came later. I got the idea that moving bits on the engines would be cool, so I did that. Then later I came up with the idea for a rotating ring, and I figured that out too. Since the LL2016 is modular, it’s pretty easy to add onto when you have an idea. 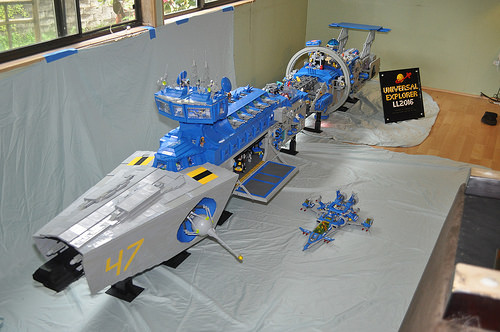 Other features include a large cargo bay with doors on either side. It took some time to design the doors so they would sit level when open. In this way they become a shelf for minifigs and models. The cargo bay is pretty big, It can fit Benny’s Spaceship inside.

LL2016 has two landing craft. They are mounted on the lander module. There are docking clamps that hold the ships in place. Once released, the landers come right off. I have one lander set up for passengers and one for cargo. 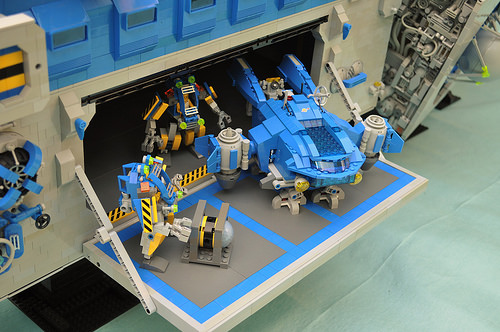 There is also the Hopper. It is a Classic Space exploration vessel. It is meant to go planet-side and see what’s there.

The mid-ship has 10 smaller utility craft for whatever use may be needed. The original design was to have them as escape pods, but I think they are too cool for that. 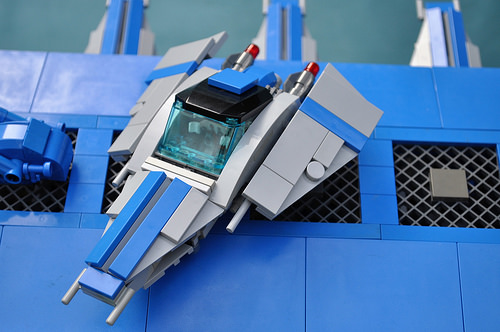 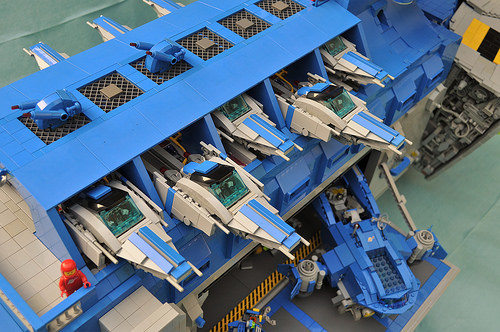 The cargo module holds 12 containers. I made a space truck to carry a container. I call it the Space Pork Chop Express, named after a truck of the same name in Big Trouble in Little China. Many of the containers do have cargo inside.

Favorite feature? Probably the gripper robot arms that come out of the side of the science module. 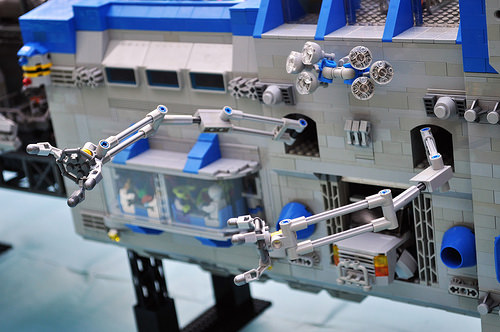 TBB: What kind of space do you have for building big?
Mark: I have a small 200 square foot outbuilding that is my shop. As I mentioned before, LL2016 is modular. I didn’t build it as one piece. It has only been in the last month that I actually got to see her fully assembled.

TBB: How do you go about building something so large? What was your process like?
Mark:  I don’t over think it. I use the advice given to me by many other great builders. Big builds are simply lots of little builds mashed together. You picture the end result and break it down more simply and then do that.

Also for SHIP building specifically, I remember Jon Palmer telling me to keep in mind the scale of LEGO SHIPs. We make them big and they look cool. But in scale, the largest of LEGO SHIPs still only scale out to very large yachts. To get to true Captial SHIP scale, these things would need to be 20 or 30 feet long. In that vein the LL2016 is a small SHIP. An exploration vessel roughly the size of a mega yacht. 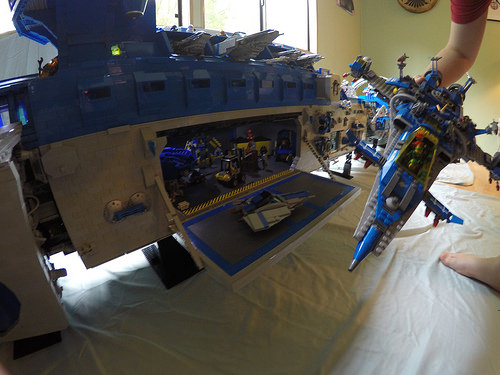 TBB: What unique challenges did you encounter while building this model?
Mark: The most challenging part… was two things now that I think about it. Getting the spinning ring mounted and the docking clamps for the landers.

The ring is attached by four bogeys. The bogeys are spring loaded in a chassis pushing outwards. They keep the ring centered and provide friction to turn. One bogey is powered and has a reduction gear so the ring does not spin too fast.

The docking clamps took some engineering to create a release so that one lever can hold and release the ships. There is one spring loaded lever that when pulled back releases four arms that hold the ships in place.

How do I figure it out? You know in the Lego Movie? Where the master builders just see pieces floating around and put them together to make some thing work? I do that. My wife calls it my Borg brain.

Thank you again, Mark, for your work on this amazing ship. If you want to see Universal Explorer LL2016 in person, be sure to come out to BrickCon 2016 in Seattle, Washington!