Now that LEGO’s Disney Collectible Minifigures are available in stores around the world, if you’re anything like us you’ll be furiously digging through cases in the store, trying to feel the blind packs to get full set of the 18 figures, or maybe just your favorites. Never fear, we’re here to help, and having already sorted quite a few ourselves we can offer some tips to help ensure you get the figures you want.

As we mentioned in our review of the Disney Collectible Minifigures, they come in a case of 60, with each case containing three full sets plus some extras. A case breaks down like this:
Three each of Aladdin, Alice, Ariel, Buzz Lightyear, Captain Hook, Cheshire Cat, Daisy Duck, Donald Duck, Maleficent, Minnie Mouse, Peter Pan, and Ursula.
Four each of Genie, Mickey Mouse, Mr. Incredible, Stitch, Syndrome, and the Toy Story Alien. 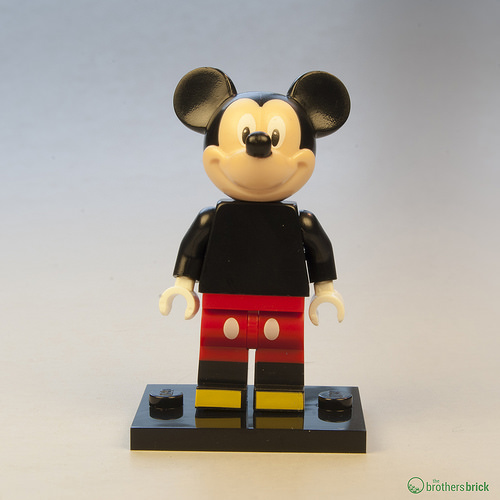 Mickey Mouse
Mickey Mouse is a simple figure, with no accessories. The easy way to distinguish Mickey is by feeling for a large head (it’s much larger than a standard minifig head) and then find the ears. Mickey’s iconic round ears are easy to feel through the bag as two flat disks protruding off a large sphere. If you feel small pieces in the bag — basically anything that’s not a torso, pants, head, or base, you know it can’t be Mickey, the Toy Story Alien, or Stitch. 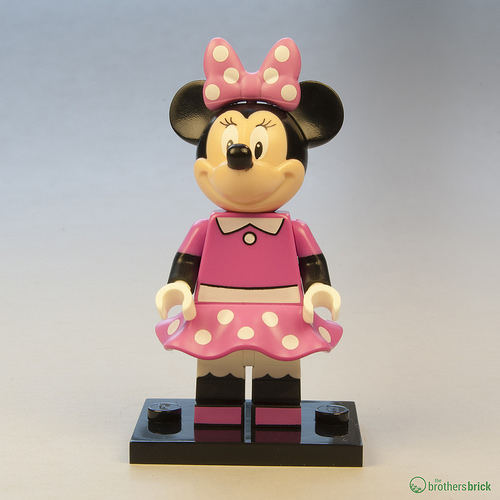 Minnie Mouse
Minnie Mouse easiest to find the same way as Mickey; feeling for a large head (it’s much larger than a standard minifig head) and then find the ears. The iconic round ears are easy to feel through the bag as two flat disks protruding off a large sphere. To distinguish Minnie from Mickey, hunt for the skirt piece; it’s hard plastic in a large fluted disk shape. If you find the skirt first, you know you’ve found either Minnie or Alice. Minnie also has a bow. The bow can sometimes be hard to distinguish from other small pieces and also comes in Daisy, so by itself it’s not a good indicator. 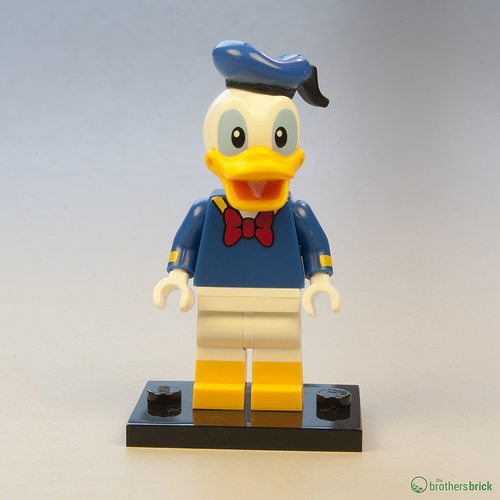 Donald Duck
Donald Duck is easiest to find by searching for the large bulbous head with an open bill on one side. Donald’s hat is fairly easy to feel through the bag and is a pretty unique piece; just feel for a small piece that’s smoothly rounded on one side, and has a single sharp point on the opposite side. You’ll need to find the hat to distinguish Donald from Daisy. 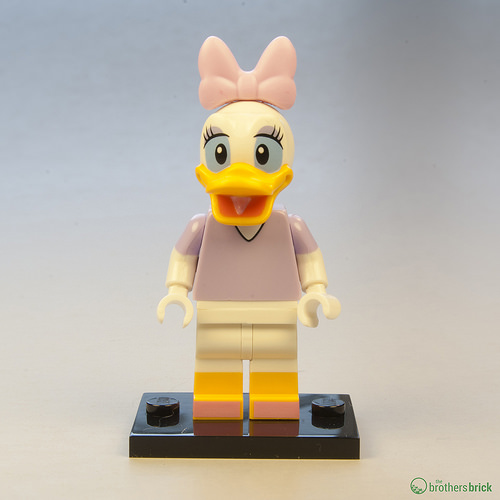 Daisy Duck
Like Donald, search for Daisy’s large, bulbous head with an open bill first. The find her bow (or Donald’s hat) to tell if you’ve got Daisy or Donald. If you find the bow, make sure you feel the head thoroughly to make sure you haven’t gotten Minnie instead. 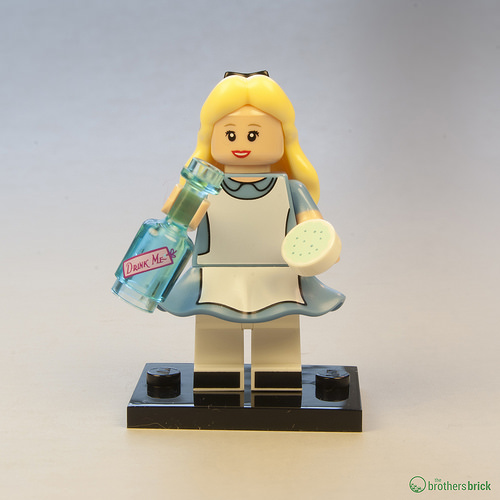 Alice
The easiest way to find Alice is to find the bottle. The bottle is a very distinctive piece that only appears in this fig. Just make sure you aren’t mistaking it for the telescope that’s part of Maleficent’s staff. Feel for the thicker part of the cylinder which makes the bottle’s body; the telescope is much narrower. One of the first pieces you’re likely to feel, though, is her skirt, which is a large, hard piece of rippled plastic. If you find that, you’ve got either Minnie or Alice, and only Alice has a standard minifig head or the bottle and 1×1 round tile. Alice’s hair is also unique, but it’s so smooth that it’s hard to determine what you’re feeling when you find it. It can also be easy to mistake for Ariel’s hair, so go back to feeling for the small accessories instead. 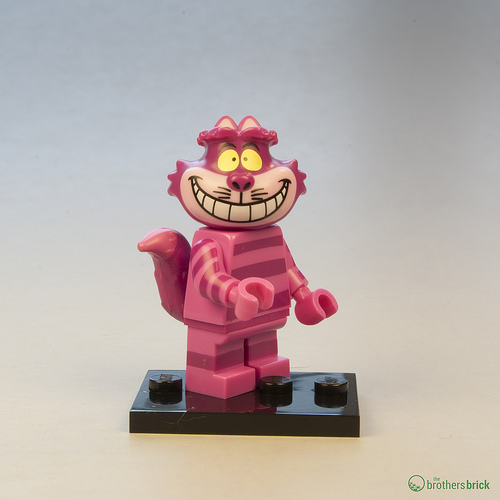 Cheshire Cat
The Cheshire Cat’s head is hard to distinguish in the bag. It feels a bit like the mouse heads, or the Toy Story Alien’s, so the easier thing to look for is the cat’s unique tail piece. It will feel like a small curved cylinder, and one end will have a large rectangular piece (the hip connection) attached perpendicularly. The tail is rubber, so it will have some softness to it. The Cheshire Cat is one of 3 figures to have short legs, so if you feel a pair of short legs, you’ve got either this, Stitch, or the Toy Story Alien. 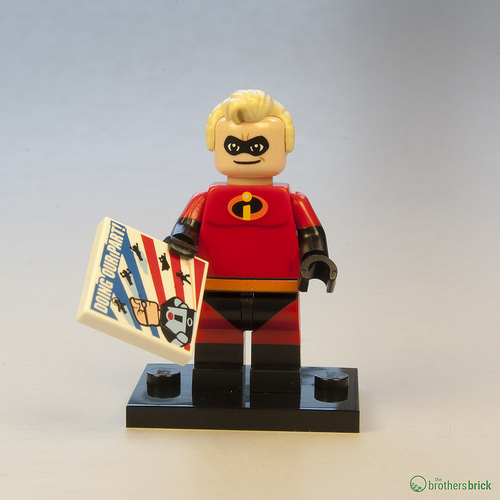 Mr. Incredible
Only Mr. Incredible and Syndrome have 2×2 square tiles, so that should be the first thing you feel for. After finding it, you’ll need to tell them apart. Mr. Incredible’s hair is much smaller than Syndrome’s, so feel for a large cone-shaped hair piece; if you don’t find one, you have Mr. Incredible. 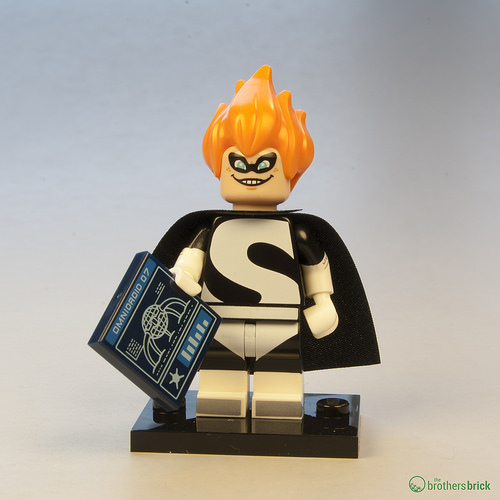 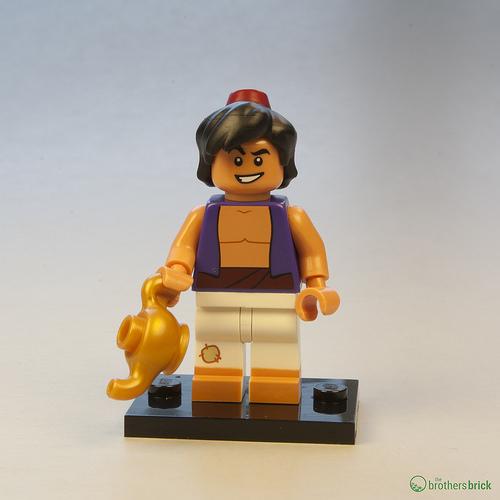 Aladdin
Aladdin’s lamp is the most unique piece here, so find that first. It will feel like an odd little sphere with hoses protruding on two sides. Both Aladdin and the Genie have the lamp, so after finding it, just look for the minifig legs. If you find standard minifig legs, you’ve got Aladdin. Aladdin’s hair is unique, but is very hard to tell apart from a number of other hair pieces, so stick with finding the lamp and legs. 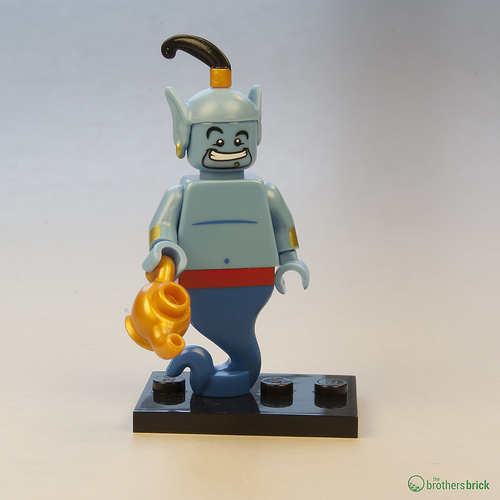 Genie
As with many figures, it’s often the smallest pieces that are the most easily distinguished. So it is with the Genie — look for his feather or his lamp. If you find the feather (a very small, curved flat piece with a knob on one end) then you know you’ve got the Genie. If you find the lamp, you’ve got either the Genie or Aladdin. Find the Genie’s whispy ghost body to confirm. 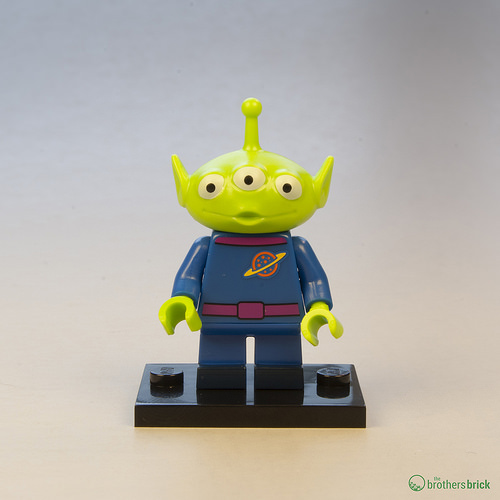 Toy Story Alien
The Toy Story Alien is shares short legs with only the Cheshire Cat and Stitch, so if you find short legs you can quickly narrow it down. The Alien’s bulbous head feels similar to several others except for one key detail: the alien has a very prominent antenna, which should be easy to feel through the bag. As soon as you feel that antenna attached to the head, you know you’ve got the Toy Story Alien. 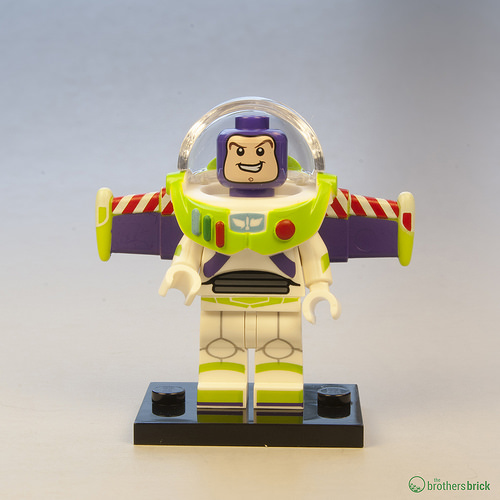 Buzz Lightyear
Buzz Lightyear has a number of unique pieces, but the easiest to find will be the wings. There are two, and they’re fairly large and very flat. They’re rectangular, and they will be easy to distinguish from the minifig stands or the 2×2 square tiles. You can also try to feel for the jet pack. It’s a large piece, and the main feature you’ll be able to feel is the circular flat space around the neck, where the visor goes. The visor is also unique, but can be harder to find. If you find something that feels like a hollow quarter sphere, that’s the visor. 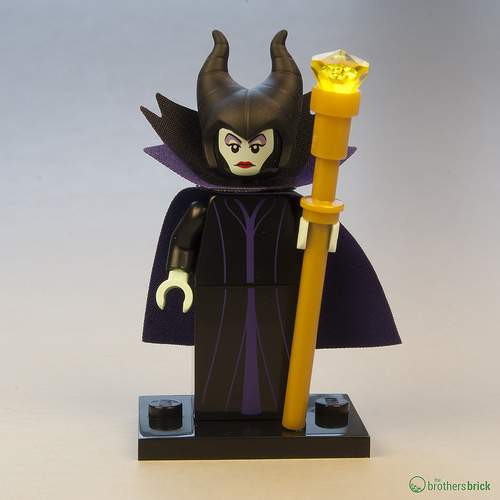 Maleficent
Maleficent is an easy figure to find, since she’s the only figure in this series to have a 2 x 2 x 2 slope as a dress piece. This piece should be easy to find in the bag, and once you find it you know you’ve got Maleficent. Other key factors will be the 4-long rod in her staff, which is unique to her. The headdress is also unique, but is rubber and can be hard to find through the packaging. The dress slope is the best indicator here. 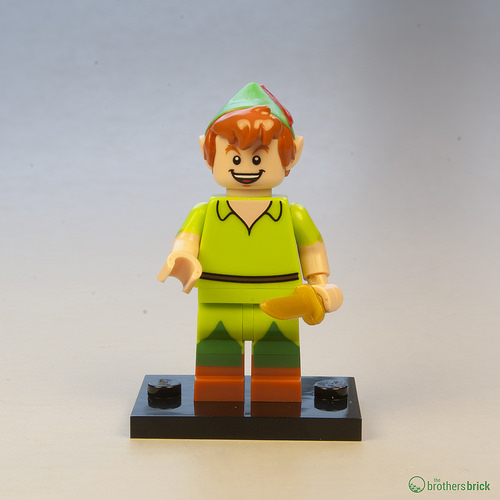 Peter Pan
Peter Pan’s knives come connected, with two attached to a sprue. So find a small plastic piece in a very distinct U shape. The knives are rubber, so there will be a lot of flex. Then find Pan’s hat to confirm. The hat feel likes a very pointy little cone, and has some detail around the wide end where Pan’s hair is molded in. 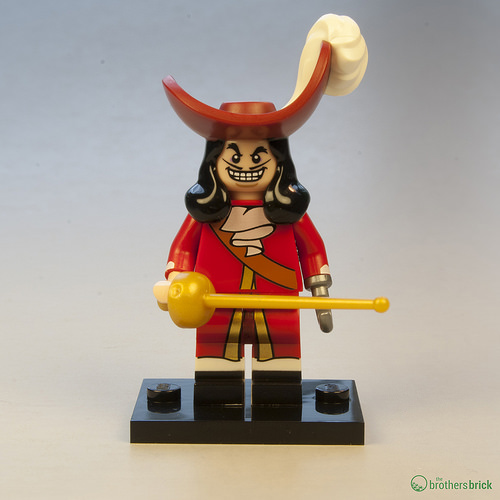 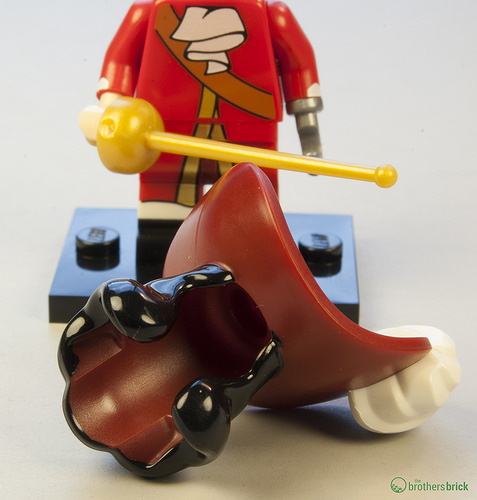 Captain Hook
Captain Hook is one of the easier figs in this series to find. His hat-and-hair piece is ludicrously large, so it will be very easy to find. Feel for a very large piece that has a giant disk on one end curved into a C shape. The hat nearly makes a half-cylinder which fits around your finger. Find the rapier to confirm, but this may be difficult with the large hat-and-hair piece in the way. 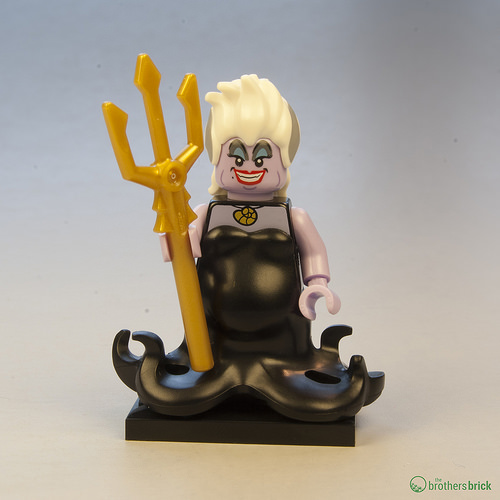 Ursula
Ursula’s octopus body is the largest piece in this series, so look for packages that are unusually bulging. These will probably be either Ursula or Captain Hook, and fortunately the two don’t feel anything alike. Ursula’s body feels like a flattened cylinder (her torso) connected to a big flaring mess of hard tentacles. Unlike Hook’s hat, the bottom of Ursula’s body piece is basically flat. You can also feel for the trident, which is very distinct with it’s W shape, if you can find it. The trident easily gets lost in the packaged, which doesn’t compress fully due to the size of Ursula’s body piece. Her hair is also unique, but is hard to distinguish and won’t be of much help. 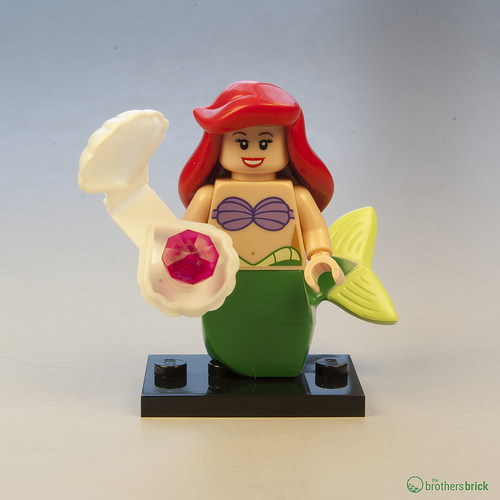 Ariel
Ariel’s fish body should be very obvious. It will flare out the package a little, and the V-shaped tail should be easy to feel. This should be the only thing you need to distinguish her, which is good since her hair, the jewel, and the clam are hard to distinguish. 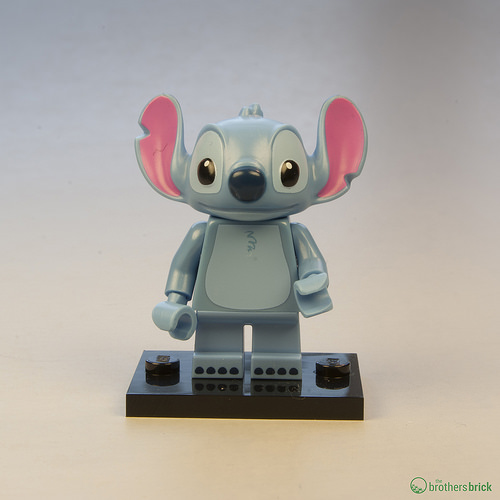 Stitch
Feel for Stitch’s head first. There are many heads in this series of roughly the same size, but Stitch’s ears are wholly unique. Feel for two large flat elongated pieces attached to the large head — they will be easy to distinguish from Mickey and Minnie’s mouse ears. Then find the short legs to confirm, which only Stitch, the Cheshire Cat, and the Toy Story Alien have.