LEGO and Porsche have announced the brand new LEGO Technic Porsche 911 GT3 RS, the new flagship model for the Technic line. It will have 2,704 pieces, and will be available starting June 1 via LEGO.com and select LEGO stores in Germany and Austria. It will see wider release in retail stores beginning in August. It will retail for $299 USD. Read our review of the Porsche 911 GT3 RS here. 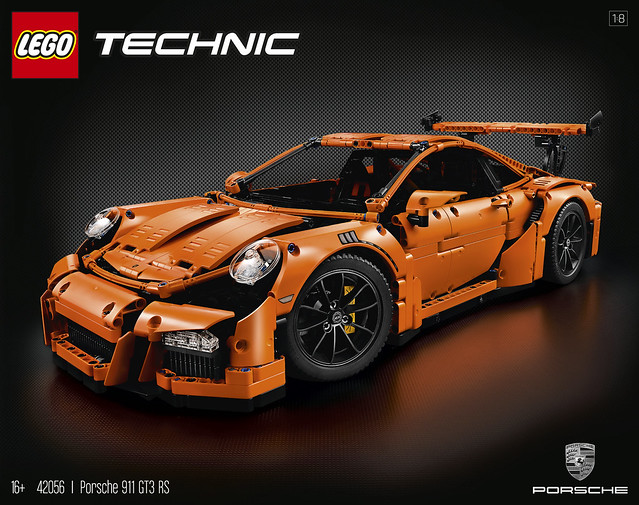 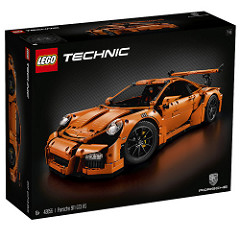 The LEGO Technic Porsche 911 GT3 RS: the art of engineering and design in 2,704 elements

One of the latest models in the legendary 911 family, the Porsche 911 GT3 RS, is appearing as a detailed LEGO Technic model. The exclusive
LEGO set of the exceptional sports car, which has been developed in close conjunction with Porsche AG, will initially be available at shop.LEGO.com from June 1st, 2016, as well as in the 13 LEGO stores throughout Germany and Austria. It will be available in other stores from August 1st, 2016.
Munich, April 25, 2016. Like every sports car with the Porsche emblem on the hood, the LEGO version of the Porsche 911 GT3 RS also combines design, performance, and functionality. Still concealed in black-and-white foil as a mystery model at the Nuremberg toy fair late January, the color of the characteristic bodywork has now been revealed and shines in bright orange. Thus, it corresponds to the special coating of the original sports car in lava orange authentically. The model, which has 2,704 elements, also delights the beholder with sleek, aerodynamic lines and an adjustable rear spoiler. Besides many authentic features, the packaging and accessories that come with this complex LEGO Technic model also contribute to a building experience rich in variety: among other things, the box contains a comprehensive collector’s book with exclusive background information on the development of the model. Furthermore, the elements of the individual assembly groups are packed in separate boxes for the first time and, together with the detailed instructions, provide an insight into the assembly process of the actual vehicle.

The LEGO Technic Porsche 911 GT3 RS combines design and functionality
According to Ferry Porsche, driving enjoyment is not created by comfort –quite the opposite is the case. Consequently, the LEGO model also features a few rough edges that give it identity and character, just like the powerful original on which it is based: the authentically recreated bodywork is convincingly realistic with its characteristically low and sloping design, the large cooling air intakes at the front, the surface contouring of its roof and compartment lid, the unique front wheel arch air outlets of the lightweight carbon fenders and the striking rear wings.

Both the performance and the sportiness of the original have been realistically reproduced in various technical features on the LEGO model. One particular highlight is the fully functional Porsche double-clutch transmission with four gears and gearshift paddles on the steering wheel. But all technically minded LEGO fans will especially love building and playing with the six-cylinder boxer engine with moving pistons underneath the rear lid.

In addition to the technical features, the interior of the model is also authentic and close to the original. A detailed dashboard, a steering wheel with gearshift paddles, racing seats, and a glove compartment concealing a unique serial number can all be found in the easily accessible cockpit. Using this serial number, additional exclusive content can also be released from June 1st 2016 by following www.lego.com/technic. 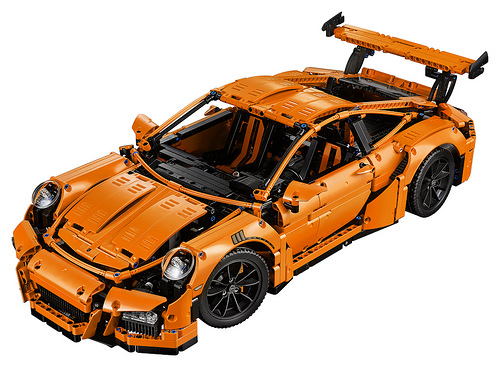 LEGO has also provided us with a brief interview with the set designers, Andrew Woodman and Uwe Wabra.

What was the idea behind this project? 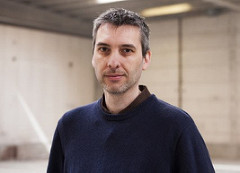 Andrew Woodman, Senior Design Manager, LEGO Technic:
As a lover of design and high-performance cars, it was a dream to make the Porsche 911 our first model. When we started to collect ideas for this new LEGO Technic model, we realized that we wanted to create more than just a great building experience. It should be all over special. We knew that we needed a partner with the perfect vehicle that was both highly desirable and a true icon. So we reached out to Porsche.

How did the cooperation with Porsche run?

Andrew Woodman, Senior Design Manager, LEGO Technic:
The cooperation with Porsche was fantastic. The employees are incredibly passionate for the Porsche brand and showed huge interest in our LEGO Technic model.
From our very first meeting it was clear that Porsche shared the same passion for the vision of this concept and together we decided upon using the current 911 GT3 RS as the first vehicle in this LEGO Technic series.

How much time did the whole process take and what were the particular development steps?

Andrew Woodman, Senior Design Manager, LEGO Technic:
The whole process took almost two ages: From the development of initial design ideas concerning the concept in winter 2013 to the final approval of the model by Porsche in fall 2015. 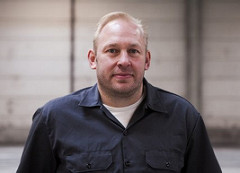 Uwe Wabra, Senior Designer, LEGO Technic:
When we started our initial drafts in 2013, the Porsche 911 GT3 RS project remained top secret. Therefore I had to build the first LEGO version using photos of the camouflaged prototype of the original from the internet. The first LEGO prototype was ready in a matter of weeks.

Andrew Woodman, Senior Design Manager, LEGO Technic:
We presented the result of the first model to the design team of the 911 GT3 RS at Porsche and discussed the basic technical functionalities as well as the shape of the body. On the basis of this feedback we designed the next model and simultaneously started with the development of the wheels rims which are an important part of the legendary design of the car. Afterwards we visited the Porsche Development Center in Weissach as well as the Porsche GT workshop area. During intensive working phases we worked out the elements and details of the car and perfected them. The final step was the approval by Porsche.

Did you experience a special moment during the development phase?

Andrew Woodman, Senior Design Manager, LEGO Technic:
During our visit at the Porsche GT workshop area we could see a preproduction 911 GT3 RS complete and finished in lava orange. This was the first time we saw the car in color – all the others had been black which made it difficult to see the proportions and details of the car. 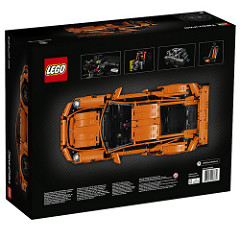 How many persons were involved in the development process?

Andrew Woodman, Senior Design Manager, LEGO Technic:
Several persons participated in the development of this model: Among others, a graphic designer started working on the required decorations and stickers. In the meantime model designers worked further on the styling and on the development of particular components, for example the gearbox.

What were the challenges during the development of the LEGO Technic Porsche 911 GT3 RS?

Andrew Woodman, Senior Design Manager, LEGO Technic:
One of the biggest challenges for us laid in designing an element that works on the 911 GT3 RS, but also in general with all others LEGO Technic elements. Furthermore something that could work in our system for years to come.

Uwe Wabra, Senior Designer, LEGO Technic:
It was important to integrate as many of the advanced technical functionalities from the real 911 GT3 RS as we could. The steering and suspension were difficult enough, but our biggest challenge was the creation of the functioning double-clutch transmission with gearshift paddles.

About the designers:
Mini Bio: Andy Woodman
Current position: Senior Design Manager LEGO Technic
Andrew Woodman is Senior Design Manager at LEGO Technic and working for the LEGO Group since 2003. The design lover has a passion for all kinds of vehicles, yachts and architecture. He passes on this passion and knowledge for design by lecturing at colleges hopefully inspiring and motivating others to become interested in his profession.

Mini Bio: Uwe Wabra
Current position: Senior Designer in the LEGO Technic department
Uwe Wabra is Senior Designer in the LEGO Technic department. He has been working for the LEGO Group for already ten years. Uwe has a huge passion for all things automotive as a glance in his garage reveals. It really is an eclectic collection of cars, bikes and trucks, consisting of originals as well as models, which is spread all over his house. 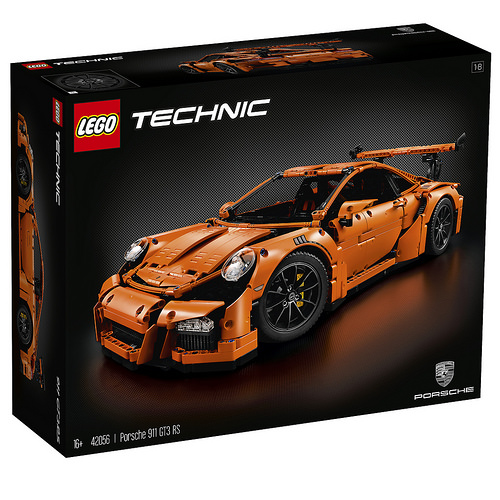