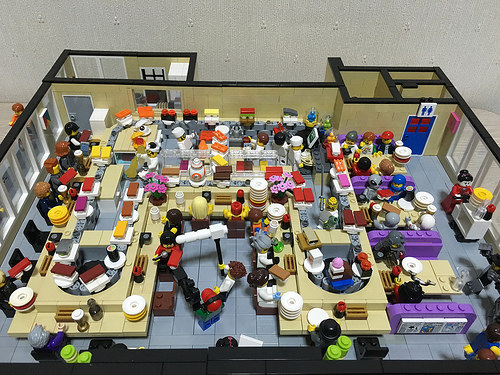 Built on four 32×32 baseplates, the restaurant is full of funny scenes and interesting characters. There’s a group of aliens (the ultimate gaijin) tasting earth food, a reporter using a fake mic, Emmet from The LEGO Movie, and even BB-8. I expect the sumo wrestler to give the lucha libre guy a run for his money… I’m personally most impressed by the wide range of different nigiri, rolls, and desserts that roll by.

You can see lots more pictures on Flickr and the builder’s blog (in Japanese). You’ll also be able to see this in person in Kobe at Japan Brickfest 2016 in June.