Gary Davis is well known for his love of all things Gerry Anderson, and his latest creations are a blast from the ‘future’. Back in 1975 a new British TV show called Space:1999 was aired, following the exploits of the inhabitants of Moonbase Alpha after the moon breaks orbit and goes wandering in space. I have to admit that before looking into more depth at the show, I thought Gary had designed a new LEGO theme; what a great idea, a new theme of retro space called Space:1999! 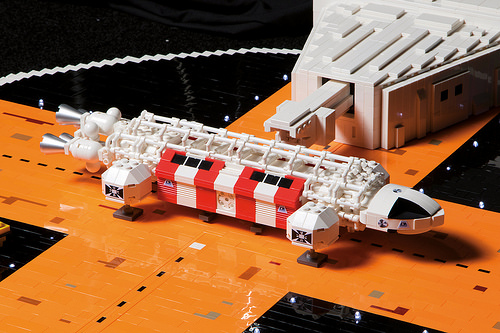 Above we have a rescue Eagle on the launchpad, which you can compare to one from the original television series. Gary has added some nice lighting to ensure launchpad Health & Safety rules are obeyed. The orange is a lovely contrast colour here, but the greebled pad details are my favourite part. 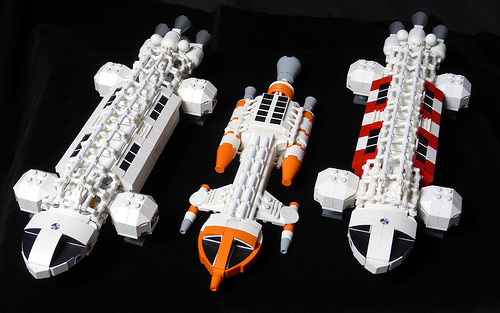 Have a look at these screenshots from the original TV series showing Eagle on the launch pad, a Hawk from the episode War Games and a close-up of Rescue Eagle taking off. Gary’s attention to detail, shaping and SNOT skills all work to create really accurate LEGO models of the original TV models of Eagle, Hawk and Rescue Eagle. 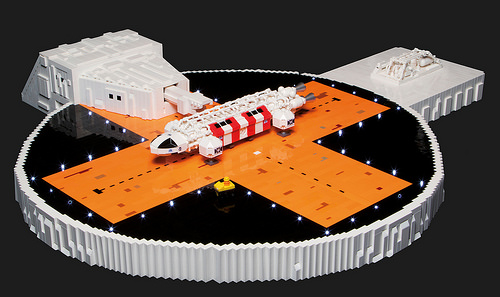 All the greeble-tastic details can be seen in Gary’s Space:1999 Album on Flickr.