The January 2016 LEGO sets continue to arrive on our doorstep, so we continue our flurry of new set reviews with 75139 Battle on Takodana. This new set from The Force Awakens was released on January 1st and retails for $59.99. 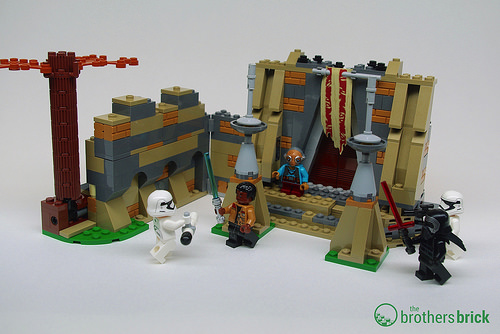 As I did when reviewing 75140 Resistance Troop Transporter and other recent LEGO Star Wars sets, I’ll bury the full review under the jump, but I WILL be referencing spoilers in this review. If you’re reading a LEGO Star Wars set review about a set from The Force Awakens nearly three weeks after the movie was released, I think it’s safe to assume you’ve seen the move.

If not, SPOILERS AHEAD! YOU HAVE BEEN WARNED!

The Battle on Takodana comes in three numbered bags, with a single 72-page instruction booklet.

The first bag includes parts for the first section of Maz Kanata’s castle (since that’s what we’re building here), along with two First Order stormtroopers.

Since the set consists of a structure rather than a vehicle, there’s not a lot in the way of SNOT (Studs Not on Top) and other studs-out techniques, though as the build progresses there are plenty of clever gimmicks for play features that use techniques I haven’t seen before. I’ll cover the play features in more detail later in this review.

More plate, slope, and brick stacking continues in Bag 2, when Kylo Ren and Finn join the fray. During the second part of the build, you add a brick-built sliding door. 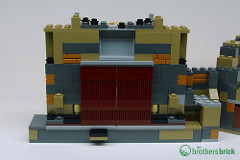 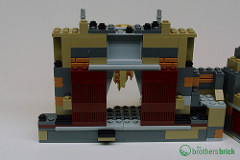 Maz Kanata finally shows up in Bag 3, which takes up the whole second half of the instruction booklet. There are three separate play features in this fairly small section of the wall, which is hinged to connect with the larger door section built in the previous two bags. The play features include the usual gears/handles + camshafts techniques we’ve come to expect, but the large tan gear is connected to a rather ingenious setup of Technic liftarms that make the pop-off wall sections in sequence when the cam rotates. More on this later… 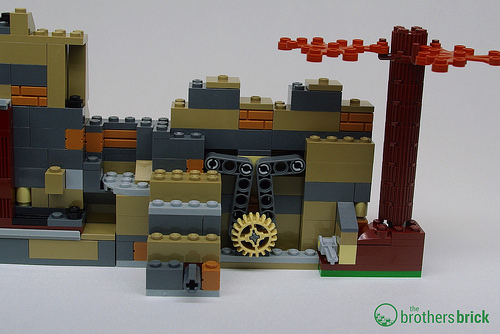 Given that this is a numbered bag affair, the set is modular — the door section pops away from the wall section. 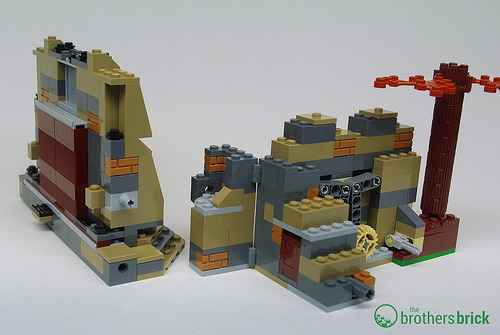 The build itself felt a little brief for a $60 set, and since I’ve mostly been building rather substantial vehicles like 75105 Millennium Falcon and 75102 Poe’s X-wing Fighter lately, the construction techniques (other than the very clever play feature mechanisms) felt a little basic.

While I don’t see any totally new parts in this set (and I’ll acknowledge that I’m not a parts guru), it includes a sizable amount of dark tan and a whopping 28 masonry profile bricks (aka “brick bricks”) in nougat. The set also includes plenty of useful plates and bricks in dark gray. As I built the set, it felt like there wasn’t a single piece I would term “useless” or “single-use” — at least for my own building style (though also acknowledging that I’m no NPU guru, either).

As useful as every piece in the set may be, I’d be hard-pressed to recommend the set on value alone. Even though I’ve felt for years that an increase in the “standard” ten cents per piece so many collectors abide by is overdue for an increase, it’s still a useful yardstick to compare against. The set includes a mere 409 pieces for $60 — that’s nearly 15 cents per piece. In contrast, 75140 Resistance Troop Transporter retails for $70 with 646 pieces, or about 11 cents per piece. In other words, for only $10 more, you get nearly 250 more pieces in the Resistance Troop Transporter.

Finn is the same minifig as the one in 75105 Millennium Falcon, though I accidentally put Kylo Ren’s legs on him so he looks like he’s wearing stormtrooper longjohns in these photos… 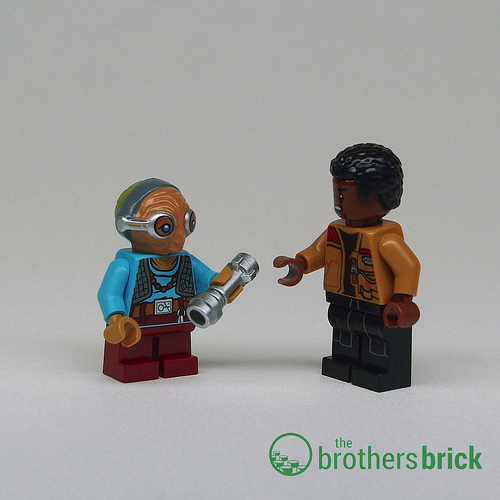 Maz Kanata is a brand new minifig, with a unique head, a cool torso print, and short legs. As with Rey’s headwrap, Maz’s goggles don’t come off. 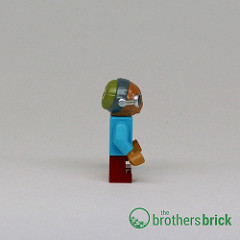 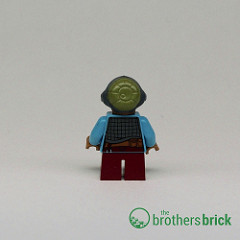 Kylo Ren and the First Order stormtroopers are the same as the minifigs in other sets from The Force Awakens. One of the stormtroopers wields the riot control baton he uses to fight Finn after Finn takes Darth Vader & Luke Skywalker’s lightsaber from Maz Kanata (again, we warned you about spoilers). 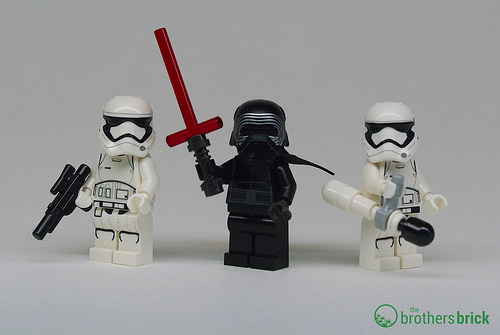 The Kylo Ren minifig has hair as well as a helmet, and his head is double-sided — for sulking and temper tantrum modes. 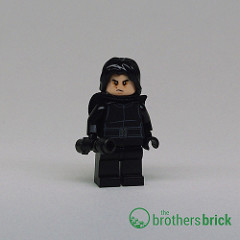 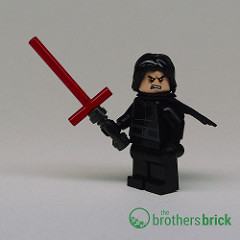 Given that this version of Finn was only available in the $150 Millennium Falcon and Kylo Ren was only available in his $120 Command Shuttle, the $60 you pay for this set is actually a fairly cost-effective way to pick up these two minifigs in a set, along with the wonderful Maz Kanata minifig and a couple of First Order cannon fodder.

Ultimately, 75139 Battle on Takodana is a minifig playset, which is why I inverted my usual review order and discussed the minifigs first. But even if the stars of the set are the minifigs, the playset itself has quite a lot going for it.

The front door to Maz’s pirate/smuggler hideout looks like a perfectly scaled-down version of the movie set. Inverted 1x2x3 inverted slopes in light and dark gray create a triangular opening, with a banner hanging over the door. 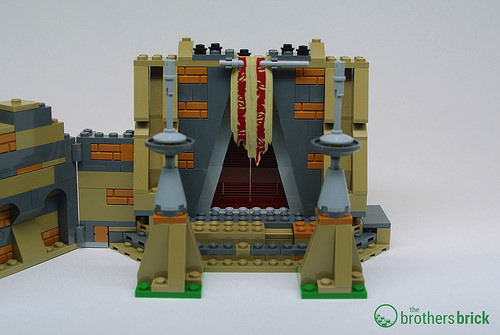 The left side of the structure looks smaller, but this is where all the fun actually is. 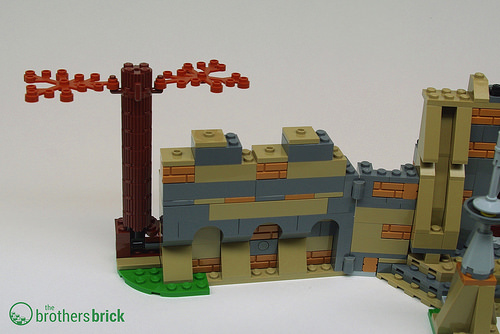 One small camshaft pushes a wooden container out of the wall. 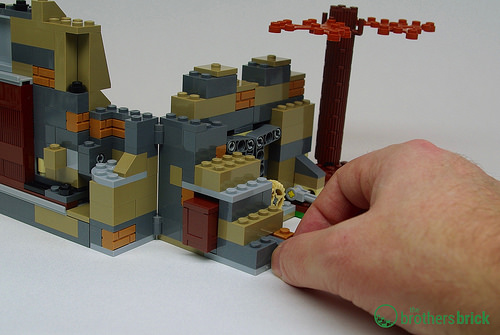 When you turn the large tan gear I mentioned earlier, its camshaft moves first one, then the other Technic liftarm, in turn pushing the breakaway wall sections up… 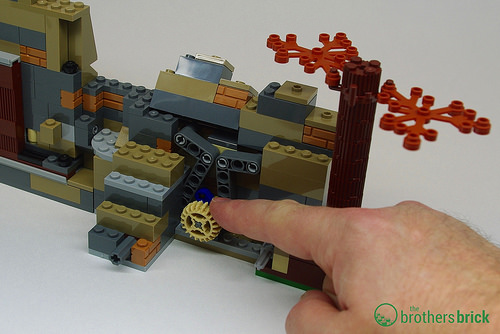 …and then over onto the ground below. 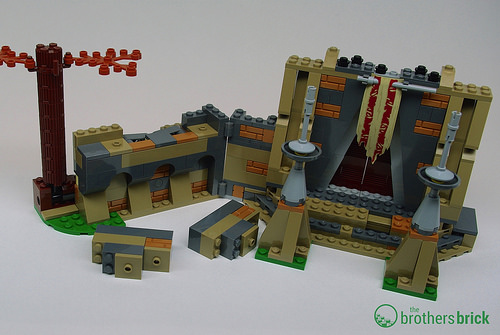 The third play feature in this section is a falling tree, activated by a lever. 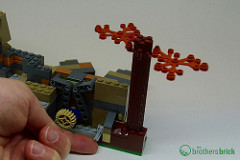 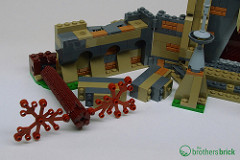 While I appreciated and enjoyed many of the play features in this set, one of the more baffling features is a little depression on the steps that you’re supposed to put five 1×1 round plates into, and pop them out with a push-plate behind the doors. This doesn’t look like destruction, as such, and having seen the movie twice, I have no idea what this is supposed to be. Any ideas, dear readers? 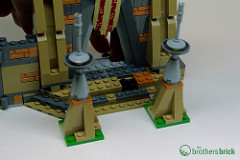 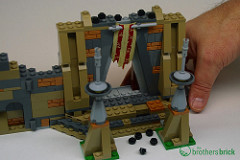 751309 Battle on Takodana has a lot going for it — another batch of five excellent minifigs (including two previously available only in much more expensive sets), useful bricks, and a really fun finished model with lots of playability.

But it’s hard for me to recommend this set at full price, compared to similar-sized LEGO Star Wars sets with considerably more parts. I built the recently retired 2014 B-wing earlier this week, and at 435 parts at $50, the completed set is one hefty model at a decent price. I can’t say the same about Maz Kanata’s castle in this set, no matter how awesome the minifigs or how fun the play features.

As much as I do like this set, the price is high enough that it becomes a key consideration in my recommendation. I’d recommend waiting to pick this up until large retailers like Amazon inevitably put this on 15-20% discount. But if you’re worried you’ll miss out on Maz Kanata by waiting too long and you don’t want to dish out a combined $270 to get Kylo Ren and Finn in other sets, $60 isn’t such a bad deal.

751309 Battle on Takodana includes 5 minifigs and 409 pieces. If we haven’t dissuaded you entirely, you can pick it up for $59.99 from Amazon.com, the LEGO Shop, Target, and elsewhere.