LEGO’s new Nexo Knights line has launched and is finally available. We’ve already reviewed two of the medium-sized sets from this line, but some of the little sets intrigued me. Each of the named characters has an Ultimate version, available as an individually boxed set for $10 USD. Part counts range between 65 and 101. Six characters are available now, and at least three more are in the pipeline. 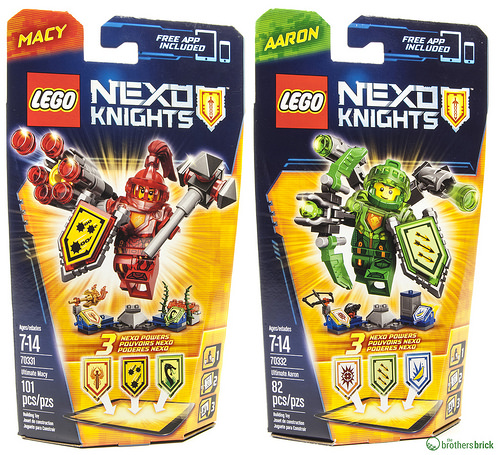 The boxes are quite large for $10 sets, being made to sit on the shelf or hang on retail pegs. They’re comparable in size to a lot of the older bagged Bionicle and Hero Factory sets. Each contains two bags, an instruction booklet, and no stickers. Let’s begin with Aaron. 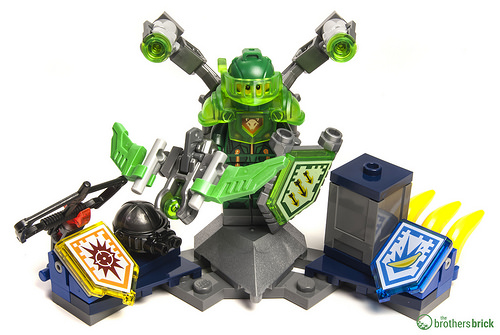 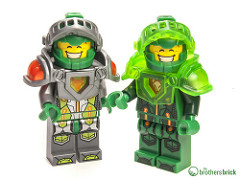 70332 Ultimate Aaron has 82 pieces. Aaron is the knight that also comes in Infernox Captures the Queen, but this is the ultimate version, so it must be better. Regular Aaron is wearing silver and lime green printed armor, with a pearl silver and trans-neon orange armor piece. Ultimate Aaron is much more environmentally conscious. Interestingly, despite looking significantly different, the two versions share the same print. The colors have been vastly changed, but the print (and consequently, the armor it’s indicating)

has all the same outlines and details, which I think is pretty cool. Both share the same two-sided head. The shoulder armor, too, is identical except in one key area: Ultimate Aaron’s armor has four studs on the back, instead of two. It surprised me that LEGO would produce two armor molds so nearly identical. All things considered, though, I think I prefer regular Aaron’s silver suit over Ultimate Aaron’s green goblin getup. 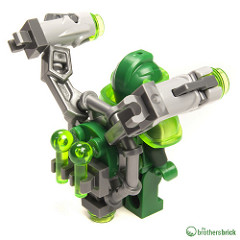 I suspect, however, that the true reason these are ultimate figs lies in their accessories and alternate equipment loadouts. Ultimate Aaron comes ready for battle three times over. First, there’s the main battle mode. Aaron has two over-the-shoulder stud shooters mounted to his back armor. Cleverly, there’s a 1×1 clip facing down from the bottom of his backpack which serves as a third leg to stabilize him, since naturally with all that gear he’s back heavy. In this mode, he also carries a shield and a ridiculously

fancy crossbow. Using a similar mechanism to the stud shooters, it fires a bar with a Ø5.9 tow-ball on the end, which is a marvelous new piece. Incidentally, this piece is compatible with all of LEGO’s other Ø5.9 ball family of pieces, such as the Mixels joints. Mecha builders, rejoice. 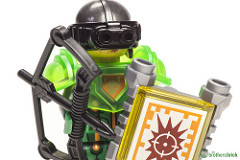 In the second mode, Aaron tries out for the Avengers’ role of most-underpowered superhero by bringing along Hawkeye’s bow and a shield with crosshairs on it. The colored inserts for the shields is a bit weird to me, but I suspect that’s because I haven’t watched the TV show or video game, and b

ecause I’m not in the target market. Nevertheless, they’re providing builders with a lot of fun pieces, and the shield tiles can be placed together for a cool pattern. This will be great for mosaics and detailing. Where were we? Oh yes, the final aspect of this second mode is a helmet with night-vision goggles.

The third mode is bananas. No, I mean that literally. You attach bananas to the shoulder guns, and swap out the trans-neon green 1×1 rounds for white ones, which I’m guessing represent banana goo. He also gets a shield emblazoned with a banana. Two extra bananas are included attached to the main stand, just in case you really need to trip up your foes. 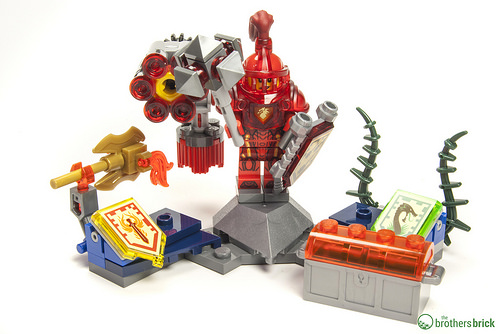 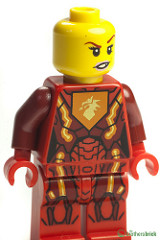 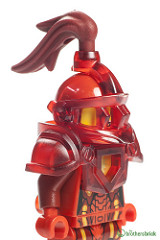 Now, on to 70331 Ultimate Macy. She has 101 pieces, but most of the increase is the addition of myriad 1×1 studs for the shooters. I don’t have any other versions of Macy to compare, but I really like this version. She has a printed suit of red power armor, and trans-red shoulder armor with four studs, just like Aaron’s. Her trans-red faceshield is a new mold, and it’s awesome. I love the way it looks with the giant plume.  Castle fans: don’t despair, there are amazing new Castle pieces in this line. They’re just mostly in spacey colors. Fingers crossed that LEGO will eventually produce all of these new pieces in more subdued colors (I do spy this piece in silver in Beast Master’s Chaos Chariot). One not

e, though: the face shield cannot hold traditional plumes. The prototyping was fascinating and rigorous, but sadly there’s no smaller hole inside to accept the tiny plume connector, which is an unfathomable oversight. [Edit: TBB reader Brad points out that a plume can be connected using a 1×1 round tile with bar. Here’s a photo to demonstrate. In my opinion it’s an ungainly workaround for what should have been a better design.] 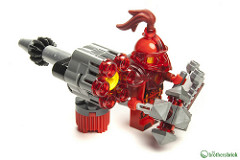 Macy too has three battle modes. In main mode, she has a ludicrously oversized gattling-style stud shooter, and she has a giant stand to keep her from fall over. In my opinion, stapping a minifig to this six-stud shooter and saying she wields it is a bit like strapping a person to a howitzer and calling it a personal armament. She also gets a giant mace, courtesy of five of the new 1×1 pyramid slopes.

Mode 2 sees her ditch the mace and swap out her shield for a trans-neon green one with a seasnake’s head emblazoned on it. The silver part of the shield also sprouts vines. She still has her giant gattling, but swaps the trans-red studs for trans-green ones. 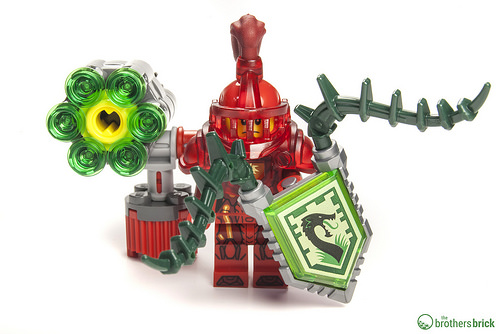 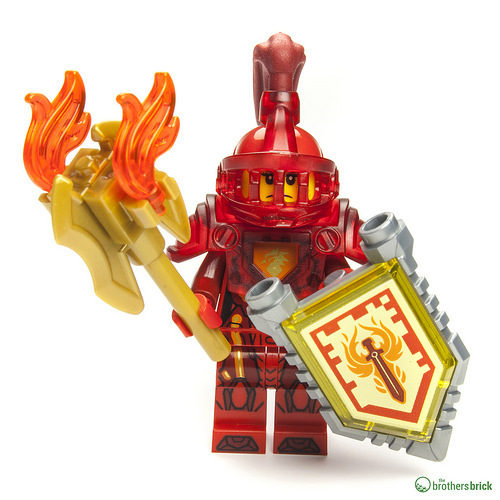 In her third mode, she is unencumbered by the giant gun, and instead gets a totally rad Flaming Battle Axe +3. It’s probably also Vorpal. Her shield swaps to none other than a flaming ax—uh, sword. Wait, why is it a flaming sword, when she’s carrying a flaming axe? I don’t know.

And then, of course, there’s the base that ties each of them all together. In both sets, they hold all the weapons and armor, and provide a stand for kids to show off their Ultimate figures. They’re not the greatest construction sets, but for $10, they provide a lot of cool weapons and armor, and a chance for kids to get elite versions of figures without waiting for special occasions to be gifted the really expensive sets. Ultimately (heh-heh), I like these sets, and at $10 a pop, I just might buy the others.