The divisive Batman v Superman: Dawn of Justice is nearly upon us, and it brings a new wave of LEGO Superhero sets. You can see the full collection in LEGO’s Spring Catalog. Today we’re reviewing 76046 Heroes of Justice: Sky High Battle. (Yes, that’s really its name.) It will retail for $59.99 USD and includes 517 pieces. Those pieces build a Batwing and Lex Luthor’s helicoptor, and you’ll get five minifigs: Lex Luthor, Lois Lane, Wonder Woman, Superman, and Batman. 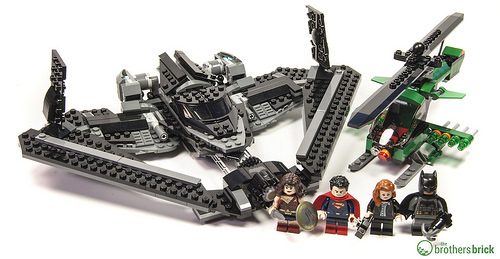 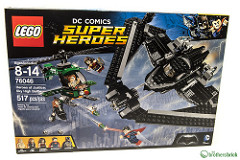 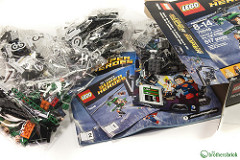 Upon cracking into the box, you’ll find three numbered bags, two instruction manuals (one large, one small), a small sticker sheet, and a miniature 12-page LEGO Superheroes comic. The comic, like most LEGO comics, is textless except for “BANG!” and “VROOM!” descriptors, and it outlines the epic showdown that happens when the heroes and villains in the set encounter one another. 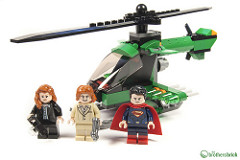 Bag 1 contains the parts for Lex Luthor’s helicopter, and Lois, Lex, and Superman. This helicopter is decidedly uninspiring. Despite the fact that the box is emblazoned with the Batman v Superman movie logo, I couldn’t help but feel I was building a comic book-inspired helicopter for the Joker. The green and orange color scheme certainly seems better fitted to the Joker than to Lex — even Jessie Eisenberg’s young off-kilter Lex. The helicopter just feels very cartoonish. There’s nothing wrong the construction techniques employed in the chopper from a technical perspective, but the finished product is severely lacking. Maybe there’s something about LEGO’s green, flying secondary vehicles that I don’t like, since I said the same thing about Llyod’s green chopper in my review of the new Ninjago airship. The heli does use the fun new windscreen from the Speed Champions line. It’s also equipped with an utterly-ridiculous eight flick-fire missiles. 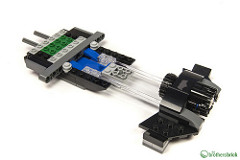 The other two bags furnish the pieces for the Batwing, naturally. The Batwing is a fun build. The front piece of the angled wings is actually attached to the cockpit via clear rods. The windscreen is a part I particularly had my eye on when opening the set, and much to my surprise, it’s actually two pieces. The windscreen is split down the middle, so that each half of the cockpit can lift independently. These seem like incredibly useful pieces, although the friction pin that holds them in place seems unusually tight. The new Nexo Knights shield tile also makes an appearance here, helping the cockpit’s nose come to a sharp point. Each of the wings is a large sub-assembly. The wings don’t make any sort of

connection with the middle piece out front; they simply rest on tiles there. This is because there’s a lever in the back of the ship that raises the wings Shuttle Tyderium-style. The two engine nacelles also flip back into an out-of-the-way position when the wings lift. 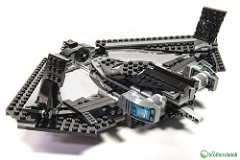 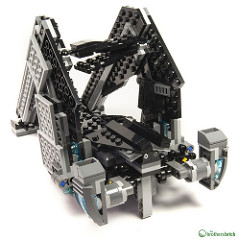 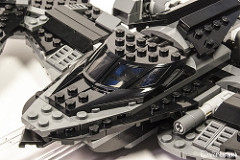 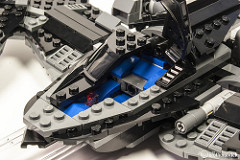 Now, on to the minifigs. All of these minifigs have appeared in other forms in previous LEGO sets. But since LEGO is always improving their minifigs, I daresay some of these are the best versions yet.

Superman and Batman both utilize LEGO’s new double-molding technique to give their boots a different color plastic — dark grey legs with black boots for Batman, and dark blue legs with red boots for Superman. Superman and Batman also each feature capes which are a soft, thicker fabric than standard minifig capes. There’s definitely no starch in these capes. Superman’s red cape appears to be the usual cape pattern, while Batman’s black cape has the fringed pattern often

used with Batman minifigs. I believe Superman’s perfect ‘do is a new

piece, also. [Edit: it appears I mistakenly swapped Superman and Lex’s heads. Superman has a double-sided head with laser eyes, not angry Lex eyes as I initially thought.] Batman’s head is double-sided, with a bat-growl and a bat-scowl on opposing sides. He also sports a new bat grappling gun (imagination required for grappling-gun effect).

Wonder Woman is clearly the one from Zack Snyder’s new film, as her outfit is the slightly more sane — but still ridiculous — costume seen in the trailers. Unlike other LEGO versions of Wonder Woman, her headband is printed on her head instead of being part of her hair. Oddly, her legs are not double-molded, but are dark red with extensive printing on the sides and front. She wields a Roman gladius and the collectible-minifig-line round shield, with a rather nice subdued eagle print in the center. The shield will be easily transferable to a minifig set in an ancient time where sword wielding makes more sense. She also has a double-sided head with angry and smirky faces.

wait, sorry, I just got caught up in the alliteration. More seriously, though, both of these figures are pretty boring. There’s nothing new here beyond the printing, and the printing isn’t all that special. Neither have any printing on the legs. They both have two expressions: Lois with a distressed face and a concerned face, and [Edit: See above; I mistakenly swapped Lex and Superman’s heads. Lex has a single boring expression, making him even less interesting than I thought.] 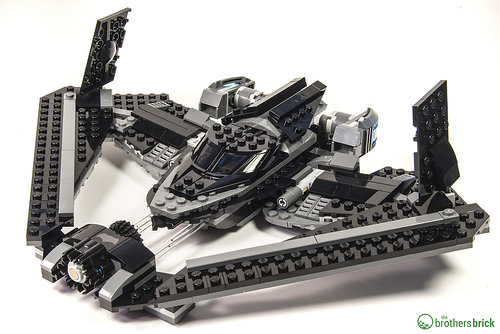 To sum up, the little green chopper is pretty lame, but the Batwing is really quite sweet. The wing folding mechanism is nifty, and the new cockpit is really cool. The three Superhero minifigs are must-haves for Superhero collectors, as these are among the best versions yet. If you can overlook the green helicopter and two average minifigs, you’ll find the Batwing and titular characters worth a visit.