Mark Stafford, a current LEGO designer on the new NEXO Knights theme, brought some  3D-printed prototypes and development parts to BRICK 2015 in London last weekend. NEXO Knights is the newest LEGO theme to be launched and is an eagerly anticipated Fantasy Castle theme with a sprinkling of Steampunk in the mix. 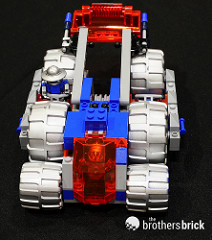 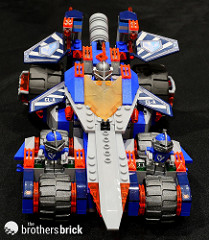 The main character in this set is Clay and the photograph shows his initial concept minifigure was a dark blue minifigure with bright blue hands. He was wearing torso armour similar to the Space armour, a Castle helmet, and holding an unremarkable sword. The second and third figures show the new body armour and helmet developing via 3D printing. The sword goes through the same process with the third minifigure holding a 3D-printed prototype and then final figure with the final mold and colour scheme. It’s interesting to see the laminated card cutouts on the developmental figures and how closely the final figure design resembles the final development figure. A very interesting process.

Clay has a couple of buddies with him in the Rumble Blade called Claybots. The Claybots have evolved from current parts (Travis brick, Tile with clip, Pneumatic T-piece) into the production of a new torso part and new shoulder molds.

The NEXO POWERS are a key concept in the NEXO Knights theme and developed from the idea of shields with a laminated card insert to a new mold and transparent ‘shields’ that will no doubt provide some lovely ‘stained glass effects’ as the four of these shields form a lovely cross shape.

Finally, we have the “baddies”, including the Scurrier! I really wanted to keep that 3D-printed mini Mr. Potato-Head (second from the left). It is clear that head area has been redesigned to match the shape of a minifigure head for compatibility.

The full set of concept, prototype and development photographs can be viewed on Flickr.