I’m seeing The Force Awakens in 48 hours, but some of the 2016 LEGO Star Wars sets arrived from our friends in Billund yesterday (with a confirmation from LEGO today that we can go ahead and post our review prior to the movie’s release on Thursday), so we’ll start our pre-movie rush of Star Wars LEGO set reviews with 75140 Resistance Troop Transporter, due out in January.

Given that this set references characters and a vehicle from The Force Awakens, I’ll be careful about spoilers myself, and the full review itself is buried after the jump. 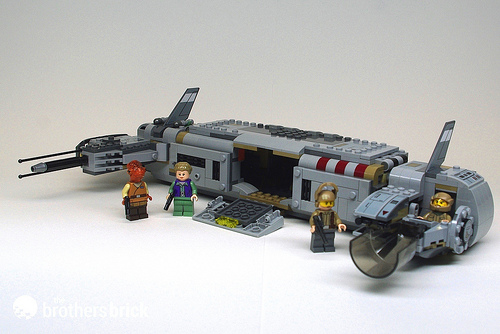 I wouldn’t normally bother talking about the box for a regular LEGO set, but given how little information we’ve had about the set, I’ll make an exception. Until now, the only photo we’ve seen of this set is a mid-resolution image in which you can’t even read the names of the characters listed on the box. This turns out to be a good thing, since one of the names reveals a minor SPOILER regarding one of the characters. Don’t click through for the full-size version of the next image if you don’t want to see the spoiler. 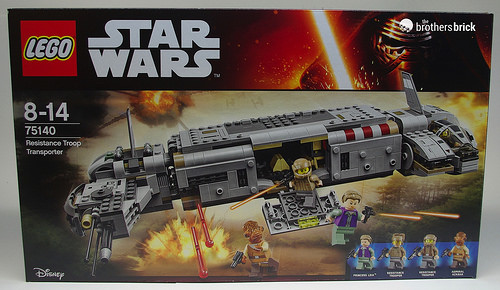 I have yet to see any photos of the back of the box online, so here it is. 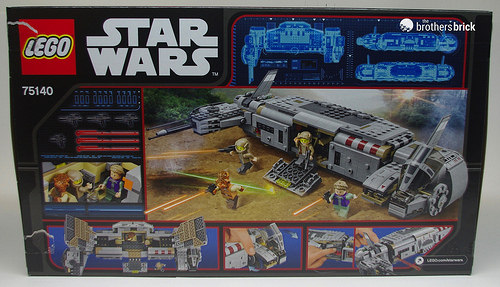 On to the actual LEGO…

The set comes in 5 numbered bags, with an 80-page instruction booklet, with the usual modular construction along the way — including Technic pin connectors between modules. 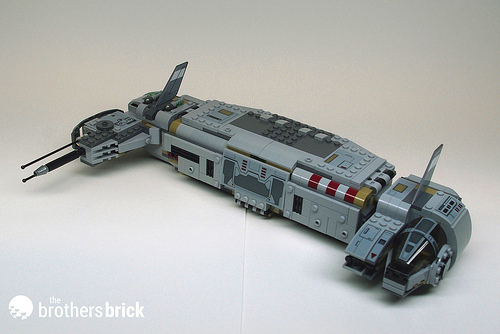 We’ve come to expect studs-out techniques from even mainstream LEGO sets these days, so there really aren’t any major innovations in terms of technique. I finished the set while watching the first half of Empire Strikes Back.

The European box I received from LEGO doesn’t include a part count on the front as American boxes tend to do, nor is there any information online yet regarding part count or price. Doing some rough math on the inventory in the back of the booklet, the set appears to contain about 600 pieces. Our guess is that the set will retail for $80-90 here in the US. (I’ll update this review with the exact part count and the pricing when we have that info, presumably in a few days.)

UPDATE: The page for this set is now up on the LEGO Shop website, and confirms the part count at 646 pieces, with a price of $69.99 in the US.

In terms of new parts (or ones I haven’t seen before and/or aren’t yet listed in any online inventories), the set contains 8 1x2x2 bricks with four studs on the side. Basically, it’s a two-brick-tall version of the old 1×2 brick with two studs on one side.

The set also includes three of the new 2×2 round tiles with open stud, along with 9 1×1 round plates with an open stud (until recently only available in white, and rarely at that). Though neither are brand new, it’s nice to get a couple more corner tiles and corner panels.

Overall, the set contains a lot of light and dark gray, but it does make extensive use of dark tan as well. At 28 1×2 plates, 13 2×3 plates, and 18 1×4 plates, there’s plenty of dark tan that’s not immediately evident in the finished model.

Amazingly, the only reference to this new vehicle from The Force Awakens is this very LEGO Star Wars set. So obviously, I can’t compare the completed LEGO set with its source material. Nevertheless, I appreciate the utilitarian, chunky look of the vehicle, and I particularly like the sensor array on the pod opposite the cockpit. 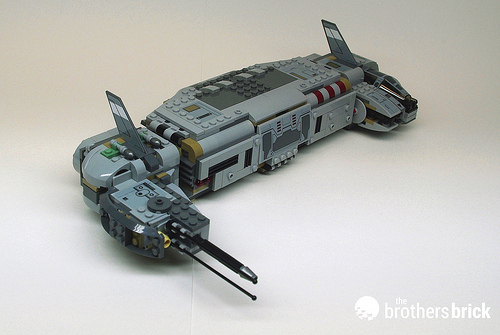 The whole vehicle opens up to reveal the interior. 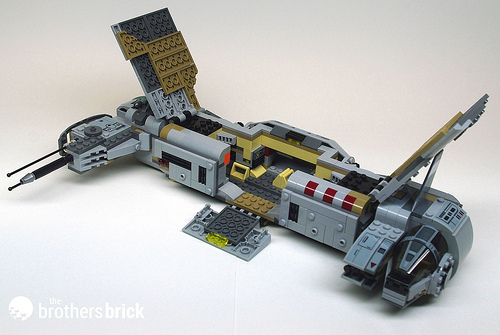 There are two console stations in the central area, and the interior is tall enough for a minifig to stand up. 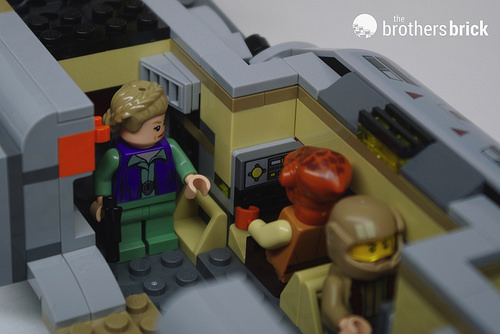 The rear of the vehicle has a fully detailed pair of engines, with brick-built cowlings that extend out from the main body of the ship. The rear is also where you flip the pair of long trans-red spring shooters. Fortunately, this particular play feature is well-integrated into the body of the vessel, and doesn’t uglify the model as they do in 75102 Poe Dameron’s X-wing Fighter.

The cockpit is flush with the vessel’s hull, so there’s a little wheel on the interior side that actuates a Technic lever to pop open the cockpit. 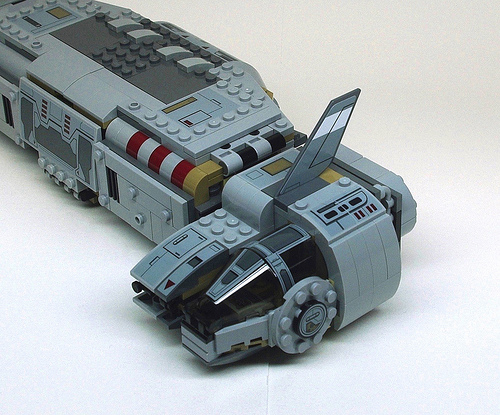 You can admit it — we’re among friends here: You buy Star Wars sets for the minifigs. It’s okay; we won’t judge. This set includes four minifigs: A certain dignitary formerly of Alderaan, two Resistance troopers, and a Mon Calamarian. 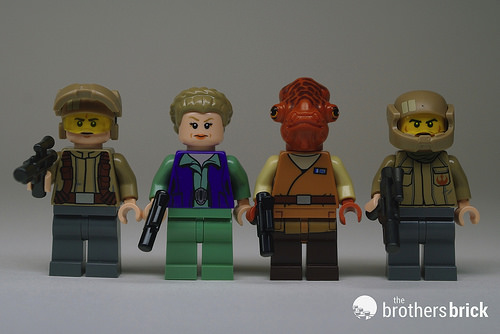 As usual, the minifigs are printed on the back as well. Leia looks like she time-warped forward from the 70’s, with a purple vest over a wide-collared green jumpsuit, finished off with a big silver buckle. Hilariously hideous (and potentially rather useful) in minifig form, but it doesn’t seem nearly as gross on Carrie Fisher in the images from the movie I’ve seen so far. 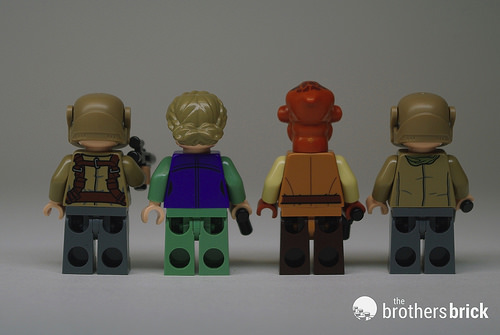 General Organa is the only minifig with a double-printed head, with a stern expression and a happy face. 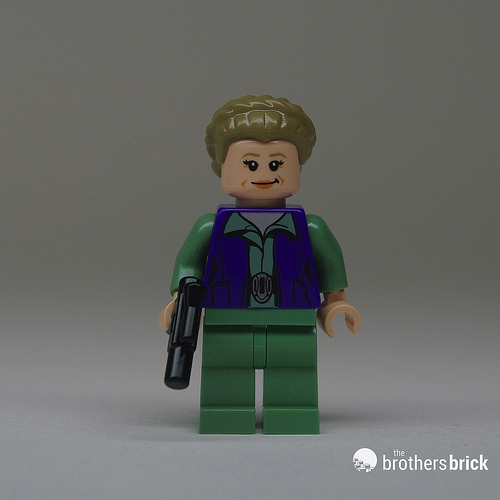 The Resistance troopers’ helmets include a face shield that folds up and down, and the two troopers have different heads. I particularly like the usefully generic printing on the trooper with the ammo pouches. 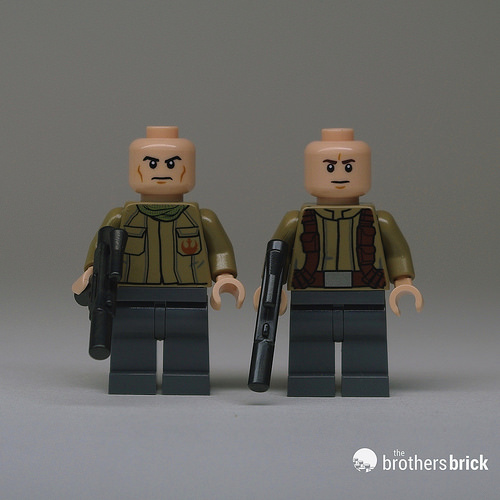 It’s hard for me to make a judgment on this set without seeing the movie on which the vehicle is based — I think I’ve mentioned on several occasions that I’m rather excited to do so. For what it’s worth, I don’t feel as ambivalent about 75053 The Ghost, even though I’ve never seen Star Wars Rebels. That sense of neutrality is compounded by not having a firm part count or price. Still, the set does include a range of useful parts, with four great minifigs.

Overall, I’d recommend the set to hardcore Star Wars fans (of which I suppose I am myself again — I’m personally glad I have my copy of the set), but wouldn’t recommend the set just for the bricks at the full price we expect.

You can see all of the photos in our photo album on Flickr.