The Steampunk-inspired January 2016 wave of Ninjago will soon be available, bringing airships and balloons and epic Pirate-versus-Ninja fights. The first set in our review tally is 70603 Zeppelin Raid, brought to us courtesy of LEGO. It features a small airship held aloft by a balloon and piloted by a pair of sky pirates; one a snake and the other skeleton. It also includes one of the eponymous Ninja heroes flying a small craft. We can’t confirm the price yet, but the set has 293 pieces, so expect it around the $30 USD mark. 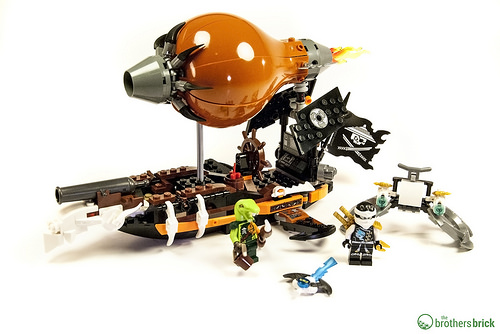 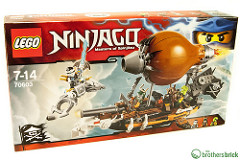 Opening the box reveals three numbered bags of pieces, two instruction booklets of differing size, a sticker sheet, and a small piece of vinyl plastic, containing a punched-out large black pirate flag. The first bag builds the ninja Zane, Zane’s flier, and the lower hull of the zeppelin. It also includes that old nemesis of the Ninjago ninjas, a snake warrior. This one is Clancee and he’s seen some hard times as a sky pirate, evidenced by his wooden peg-leg. Things aren’t looking up too much here, either, since he’s been relegated to swabbing the deck, and comes outfitted with a broom and bucket for the task. 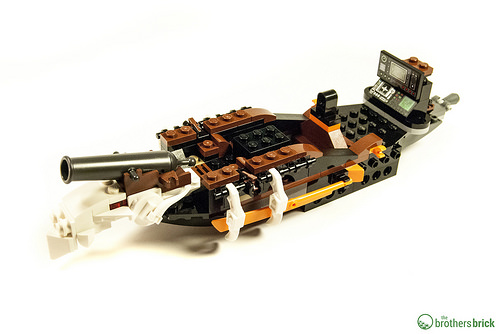 Zane’s flier is basically just a platform to stand on. It reminds me a lot of the various Green Goblin fliers from Spiderman, except this one has handlebars. I’m guessing Zane pays some royalties to Dyson for using their bladeless fan technology in the wings, but maybe I’m just being too picky in a line that includes sky pirate snakes. It also features two of new little 1×1 round plate shooters. 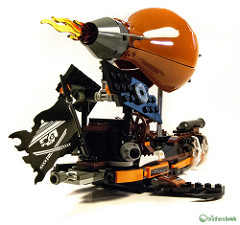 Bags two and three finish up the zeppelin and build Doubloon, the skeletal pirate captain of the vessel. The airship is relatively simple, not being large enough to really try anything too detailed. The hull is black and brown, with a belt of orange for some color, and a very stylized white dragon on the prow. A portion of the deck just in front of the helm slides back when a piece on the rear is pulled, allowing the cargo (usually consisting of a barrel of dynamite) to drop, thus turning the zeppelin into a bomber. The cannon on the prow is, of course, the firing kind, and two more of the 1×1 round plate shooters are mounted near the front; this time in brown. The dark orange balloon on top is the real highlight. It’s a godsend to Steampunk fans, finally providing us with a fantastic color for the new balloon panels which debuted in the Friends line in hard-to-use Magenta and boring white. The bummer here, though, is that only seven panels are included, and you need eight to make a full balloon. This is because the connection point for the balloon is hidden in its underside, so that  bottom panel is missing. This is such a shame, as you’d need 2 sets to make a full dark orange balloon. I think the problem could have easily been avoided by moving the connection point forward a little, in front of the panels, and leaving us with a full balloon to use in our own creations. The sticker sheet includes six stickers to put on tiles and slopes, and they’re all decent. I applied five, leaving off the one that goes in the front of Zane’s flier. 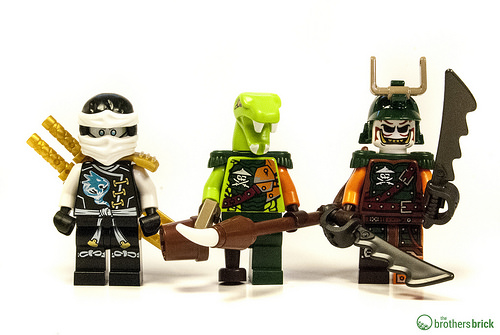 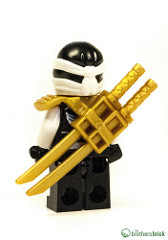 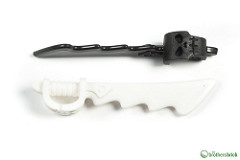 The minifigs are all quite spiffy, with new torso printing front and back on all three. The set includes four of the new jagged cutlasses, a pair in white and a pair in pearl dark grey. My set also included a spare white one, which is a pretty great bonus piece. The new cutlass has a cool little skull emblazoned on the guard. Zane’s sword is also new, and features a complex skull guard with swappable blade. The other new piece in this set is Zane’s double Katana scabbard. Unlike the previous double scabbard we’ve seen, this one holds the swords parallel instead of crossing. You get one in pearl gold here.

All in all, this is a fantastic little set. Of course, it helps if you’re a fan of the Ninjago theme, or — like me — a fan of Steampunk and anything with the word “Zeppelin” in it. Still, this is a solid set, and a fantastic playset. Kids of all ages will get a kick out of swooshing the zeppelin around, and it’s quite sturdy enough to withstand a great deal of sky shenanigans.

Check out more photos of the Ninjago 2016 sets here on The Brothers Brick! 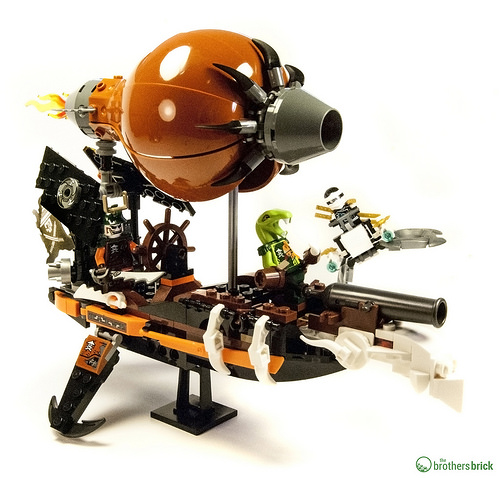