Star Wars is clearly a hot topic at the moment and Rhys Knight has created his LEGO weapon of choice, Han Solo’s DL-44 Blaster. 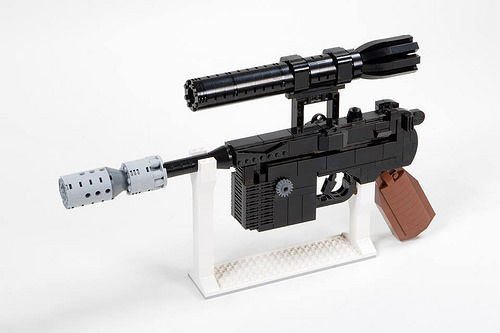 The BlasTech Industries DL-44 heavy blaster pistol was a powerful sidearm from the time of the Galactic Civil War. It was the weapon of choice for Han Solo and the Rebel Alliance and also wielded by Luke Skywalker throughout The Empire Strikes Back.

Rhys’ 1:1 model has a raised scope, and he shared with TBB that as the model is primarily black, he wanted there to be a clear separation.  He notes that the ‘fiddly’ aspect of the build was the rear of the telescopic sight as it had to be circular, but also flare out.  The trigger guard is actually upside down, and is attached to the grip via Part 60470 (1×2 plate with double clips) and attached to the power cell via a simple slot for the guard.

Best part for me — it cocks!