Over the past week, we’ve talked a bit about some of the influences behind builders’ SHIPs. For many builders, the 2003 video game Homeworld has had a pivotal effect on their building style.

This year Homeworld Remastered was re-released with updated graphics, and many space builders fell in love with the game again. So it’s not surprising to me that we saw a lot of Homeworld and Homeworld-inspired SHIPs pop up in SHIPtember.

But what was surprising to me was that some folks from the actual development team of Homeworld Remastered loved our LEGO SHIPs as much as we loved their game, and reached out to offer a few prizes! So without further ado I present the best Homeworld inspired SHIP, as chosen by those developers, who happen to also be LEGO fans:

The best Homeworld SHIP, which will also receive a copy of The Art Of Homeworld, kindly donated and signed by a group of developers, is Pierre E Fieschi with his Maersk Highliner: 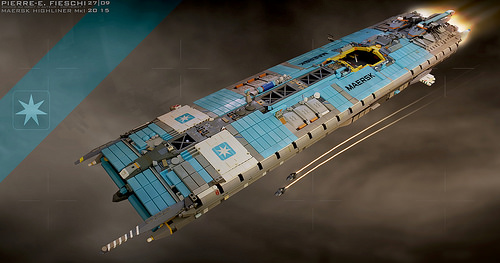 With wonderful technique and controversial part usage, this ship launched itself into the top spot despite not actually being in the game, but heavily inspired by it. Quoting the developers: “We love the layering of details. Panels overlapping one another without it being too much noise. And of course this is just outright gorgeous.” and also “That guy’s concept art and other work is legit.”

Second place, as chosen by the development team is Ryan Olsen (Rphilo004) and his Hiigaran Battlecruiser:

Again, quotes from the development team: “Nicely executed for the size and detail that you were able to get into it. Bravo!” and “It’s PERFECT. The support ships even rock. I wanna buy this or have one made for myself SO BAD.”

Which the keen eyes of the developers noticed was missing the side tower: “That surface detail. Maybe the tower hit an asteroid?”

Here are a few other Homeworld-inspired SHIPs judged by the developers, in no special order:

Possibly one of my favorite stories to come out of SHIPtember: Tiago had half built his SHIP and couldn’t decide how the back half would look, so he got Pierre (yes, the amazing Pierre from above) to sketch out the rest of his SHIP, which he promptly built right after. That’s the type of community spirit that just makes me all warm and fuzzy inside.

And the Development Team had a few words as well: “Really nice as a ‘new’ ship – I love the glass-blue bay treatment, really sharp.” and “Great job, very clean, simple and to the point. Exactly what the Homeworld universe wanted a player to experience in how we see ships far away. Also love the clear blue pieces inside the bay area. Maybe add some LED lights in there and make it glow?”. 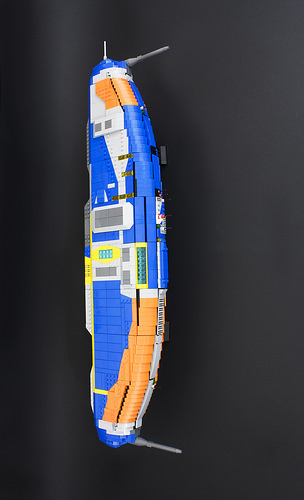 From the Homeworld team: “Impressive curves” and “Sweet mothership and impressed with what you were able to accomplish at such a small scale”.

Says the team of this SHIP: “Just too amazing” and “Blows my mind. Were they allowed to use glue? The amount of engineering required to do that without glue must be insane”. For the record, I know the builder personally and asked; there was no glue, just a lot of clever brick engineering to make it work.

Join us tomorrow when we finish off Week of Wonders: SHIPtember with the announcement of one more prize for Best SHIP as chosen by judges, and People’s Choice as chosen by the builders.