For a few weeks now I’ve had Lego set 31039, Blue Power Jet, sitting on a shelf in my LEGO room. It’s currently $69.55 from amazon. I picked mine up from the LEGO Store in Tyson’s Corner back in August after Brickfair, because, as an aircraft builder, I figured I would enjoy building this and be well-suited to write a set review. However, subsequently, I didn’t get around to it. Fortunately, my father helped me out here. He stayed at my place for a while a few weeks ago and, some of the time together was spent with me building my Men In Black Ford and with him building the jet. The review, however, still went nowhere. 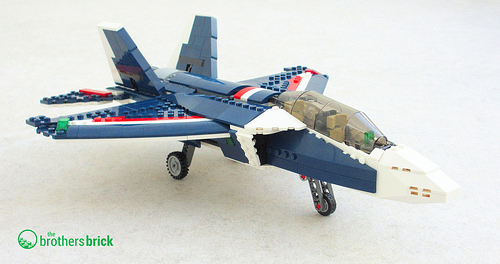 For the record, the set contains 608 parts and the instructions to build the jet or, alternatively, a powerboat or a helicopter. My father, who never had LEGO as a child, enjoyed the build, although the dark blue, dark grey and black were a bit hard to identify in the instructions. The model looks great and construction of the wings clearly shows the masterful hand of Mike Psiaki, who, before becoming a set designer, was already well-known for his ingenious aircraft models. The jet has lots of play features, such as an opening cockpit, a folding undercarriage and moveable control surfaces, yada yada yada. I’m ill-suited to writing this review (and not just because I didn’t graduate from The Eurobricks Reviewers Academy; for a more detailed review with lots of photographs of the model under construction, I suggest brickset). As nice as the finished jet is, I don’t enjoy following instructions for anything and the main reason why I like this set and pretty much the whole point of any LEGO set is that I can use the parts to build my own models. This one is a wonderful parts pack. Just look at all that lovely dark blue. Preciousss!

As LEGO fans we’ve all probably heard or read it many times: according to lots of people who used to build with LEGO as children, back in the sixties and seventies LEGO only made simple bricks in boxes with no instructions, but nowadays, if you look at the LEGO shelves in your local toy store, all you’ll see are licensed products and sets full of parts that can only be used for the model in the instructions. This allegedly kills children’s creativity. Have these people looked at the Creator range at all? One would think that the fact that there are instructions for three different models is enough of a hint that the parts aren’t single use. This doesn’t only apply to an arguably fairly expensive set such as the Blue Power Jet, but also to the smaller sets in the range. Furthermore, just because there are instructions, doesn’t mean your children have to follow them. Radical, isn’t it? What kills creativity is having them build the model from the instructions and then not allowing them to take it apart and mix up the elements with all the other parts, because a few might get lost or because, eventually, your children may want to rebuild the original. Have them improvise! I betcha Mike used to build his own stuff when he was a child.