It really doesn’t feel like 9+ years since NASA launched the New Horizons probe on a mission to explore the dwarf planet Pluto and its system of moons. But now the craft’s closest approach is finally less than a week away, and NASA wants you to celebrate the occasion by throwing your very own Plutopalooza party! (Heads up: You’d better make the party last 16 months, because at 1kbps that’s how long the probe will take to transmit back all 64Gb of its data from the encounter) 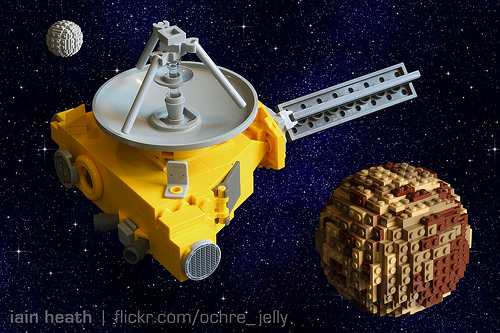 Since several of my Brothers Bricks co-contributors are hopeless space junkies, I thought I’d mark the occasion by building the above LEGO model of the little probe …accompanied by targets Pluto and Charon naturally! A lot easier to do now that we finally know what color they are.

It’s an interesting milestone for me since my very first true MOC was of the Voyager 2 spacecraft, back in 1979 when it passed Jupiter. Armed with a clothes line, white bed sheet, length of string and basic film camera, I had no idea that the resulting images would be…. hopelessly out of focus! T_T