by Tom Polsoun has already been in shops for months, but although we’ve previously seen pictures of The Big Bang Theory set, it is taking a bit longer to hit the shelves. It has finally been officially launched at the San Diego Comic Con earlier today. 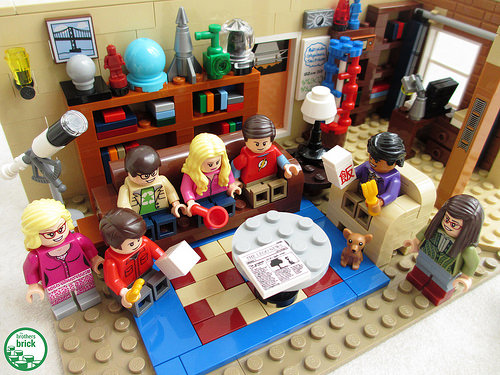 Several of us at The Brothers Brick are fans of the show, but being a physicist, I was the lucky guy granted the opportunity to review this. Having worked in both a physics and an engineering department of two universities, the characters from The Big Bang Theory are very recognisable. There may even be a bit of Sheldon, Leonard, Raj and Howard in me. This is not my life story or a review of the TV show, however, so I will cut straight to the chase: the price is pretty steep for only 479 parts, so if minifigures aren’t your thing or you don’t like the show, this set is not for you.

The minifigures are the highlight of the set and probably the main reason why anybody would want this. All seven characters are instantly recognisable and come with new printed parts for the faces and clothing. The prints are highly detailed and look crisp, with Amy’s knitted vest and the tiny flowers on Bernadette’s skirt standing out in particular. The backs of the torsos are also printed. The upper and lower parts of the legs on Amy and Bernadette are molded in different colours, to represent skirts, with the obvious advantage that the figures look decent when seen from the back (in more ways than one). 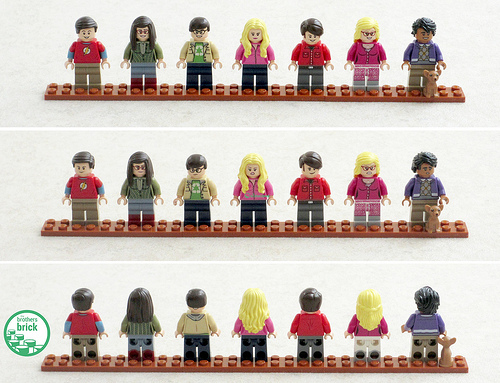 As a bonus all the figures have reversible heads, with happy faces on one side and an alternate expression on the other. Bernadette’s is a particularly menacing angry look and Penny’s will also be instantly recognisable to any fan.
A small drawback of this arrangement is that, when seen from the back, Leonard’s mouth peeks out from under his hairline. In fact, I think Leonard’s hair part doesn’t really look right. He is recognisable, but the hair really should be parted in the middle. This is a minor criticism. Since the small statures of Bernadette, Howard and Leonard, as well as Sheldon’s praying mantis looks are the subject of a fair few of the jokes in the show, in the original Ideas proposal by Alatariel and Glenbricker there were height differences between the figures. This feature sadly didn’t make it into the set, which is a bit of a shame. Raj is accompanied by Cinnamon. It should really be a Yorkshire terrier, but looks cute as buttons nonetheless. Despite a few minor niggles, there’s something wonderfully funny about having minifig versions of these characters. The various bits should also come in handy if you want to build minifigures for your own creations or to populate your LEGO city. 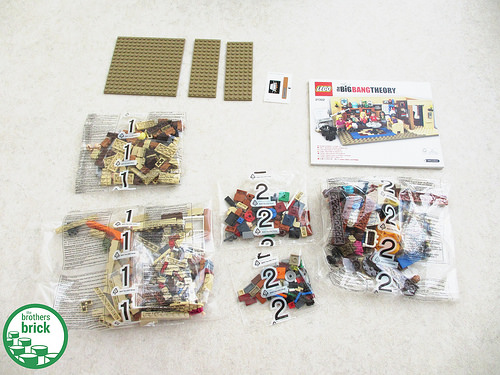 Like the other Ideas sets, this one comes in a fairly sturdy box, with a opening lid. The parts come in several numbered bags, with those numbered 1 containing several of the figures and most of the parts to build the living room wall. Bags numbered 2 contain the parts for the rest of the figures, the rug and most of the furniture. Most of the parts are fairly standard, but there’s smattering of useful small ones such as 1×1 plates, 1×1 tiles and jumper plates in various colours. It comes with a few unusual items too, such as complete set of kitchen utensils, of which only the two forks are used, and a set of four lipsticks from the Friends range, two of which are used for the whiteboard markers. 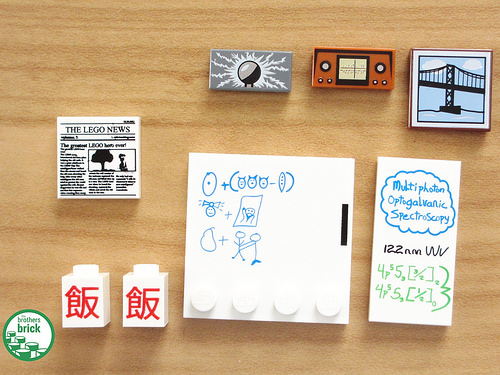 The set also comes with a number of printed parts, most of which I have never seen before. These ought to come in handy if you like building interiors for your minifig scale buildings. In addition to the printed parts, the set contains stickers for the poster on the closet door and the antique fuse board on the pillar. The instruction booklet contains short character biographies, pictures of the real cast and, once per few pages, a quote from one of the characters such as this doozy from Leonard: “12 years after high school, and I’m still at the nerd table”. I know the feeling. 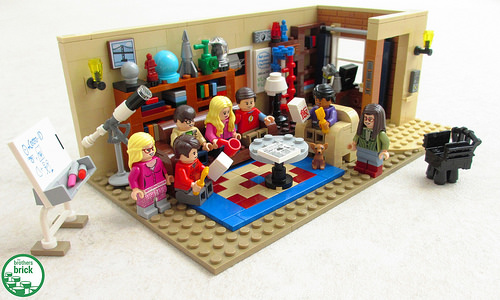 Given the limitations of the scale and the cartoonish nature of minifigures, the living room is a very accurate representation of the sitting area where the ‘gang’ tend to hang out and eat their take-out food. The various collectibles, such as the green lantern and the DNA double helix sculpture, and the books on the shelves all look great, as does the rarely-used corner with Sheldon’s old Windows 98 PC.

The Big Bang Theory is not a particularly exciting build in terms of techniques, but I very much enjoyed it, because I could slowly see the living room that I know so well from the TV series grow and because it is chock full of nice details to appreciate. The figures are excellent and the finished product looks the business. If, like me, you enjoy the show or if you enjoy building interiors for your minifig buildings, this set ticks all the right boxes. It will be available from August 1st, for a recommended retail price of $59.99 US / EUR 59,99 (depending on the country).