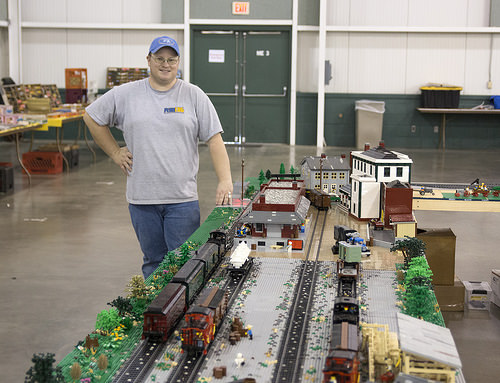 This is Cale Leiphart and he likes trains, and I’ve had the pleasure of meeting and enjoying his builds for many years now. His latest culmination of train-awesomeness is the Red Lion Station, and is a model of the Maryland & Pennsylvania RR train station and surrounding areas.

At over 3.5 x 17 feet (that’s 5 meters), this requires adjectives which I do not posses to describe the incredible feat. That’s not to say there haven’t been larger builds, but I have a hard time recalling a build of this size that has this much detail packed in. Not only does each of the buildings have a beautiful facade, but each building has a fully decked out interior. It’s so large it’s incredibly hard to even photograph, and is one of those builds that are best enjoyed in person at a display: 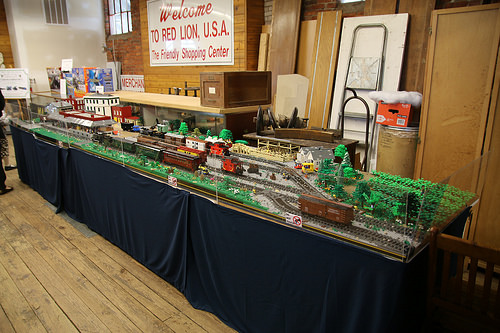 I really liked how Cale has gone against the grain and built buildings and streets at non-right angles, a non-trivial feat, to build off-axis roads and buildings: 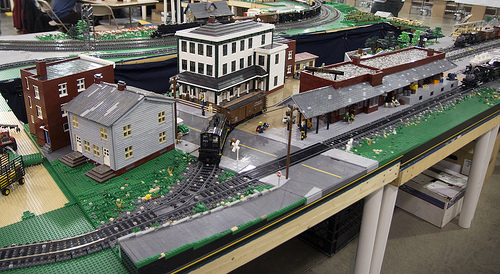 Not only are the roads difficult to build at an angle, most people would have simply laid the train track on top of the road to avoid complicated brickwork, but Mr. Leiphart, true to form, built it inside the road with some really clever brick work.

As I mentioned before, I had seen earlier versions of this layout last year and it really caught my eye. By catch my eye, I mean I did a double take and went OH-MY-G-O-S-H. Again the size is impressive, but I’m a detail guy, and this nondescript grey building blew my mind. Take a closer look at the sides, it’s not just nicely stacked brick, it’s made up of panels, hundreds of panels attached in some seemingly magical way. Despite being very late on the first setup night, Cale – who was still setting up this magnificent display – noticed our fevered interest and stopped everything and came over to us and showed us the secret of the grey building. This became my number 1 cool must-see thing at BrickFair that year.