It isn’t all that long ago that we blogged the muppets by Andreas Weissenburg (grubaluk), but his talent is not limited to building wacky characters. When I was a child, my cousin, who is at least ten years older than I am, had a fantastic series of LEGO trucks from the late sixties. They were six studs wide and had steering mechanism which worked by pivoting the whole front axle, by turning a brick mounted on the roof. This was a fun feature and the trucks had a more realistic size than the four-stud wide minifig scale ones that I had, so I remember being a bit envious. 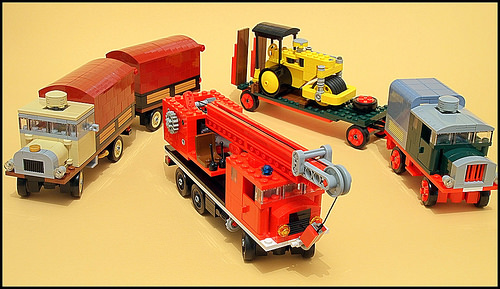 Like the updated classic sets by Are Heiseldal, Andreas’ six-wide trucks have a similar character as these older sets, but with new parts and clever details. Despite its somewhat primitive nature, I love how he has recreated the original steering mechanism. These look like a lot of fun.