Our resident Lemur recently got asked how contributors to this blog are selected. Of course, much of the process is top-secret, but I’m pretty sure a contributor should add something new and distinctive to the team, even if that something new and distinctive is a cute bushy tail and a willingness to take care of the paperwork. However, most of us share that we got into this because we like building our own models. Fan-built models are the bread and butter of this blog and knowing a thing or two about building definitely helps.

In the last two years, I have been working on a large collection of movie and TV vehicles. I have close to fifty of them now, but there are still plenty of cool and interesting examples left that I haven’t built yet. I already had a jet, but I did not yet have a helicopter, for instance. With Blue Thunder, that has now been rectified. 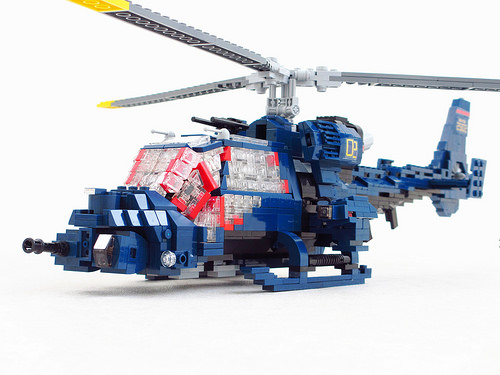 Blue Thunder was a fictional high-tech police helicopter that starred in the eponymous 1983 movie. Its pilot was played by Roy Scheider, who is probably better known for his role as the police-chief in Jaws. The movie lead to a short-lived TV series, which I used to watch religiously as a child. Although the plots of the episodes and the dialogue were undoubtedly cheesy, the helicopter was one of the coolest things ever. It didn’t talk or have a red light scanner bar, but it had a tail-mounted fan instead of a conventional tail rotor and a Gatling gun that was slaved to the pilot’s helmet. Two flyable helicopters were used in the filming: Aerospatiale Gazelles, painted in a largely dark blue colour scheme and modified with a nose-mounted pod housing sensors and the Gatling gun, an ‘armoured’ cockpit canopy consisting of flat panels and a few other gadgets. 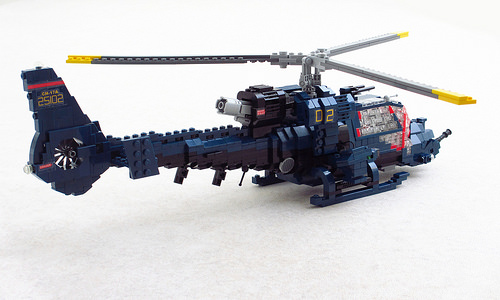 The cockpit canopy was the trickiest bit of the build. Building a rectangular structure is fairly easy. Building something that is rounded is also doable, by stepping plates or by using combinations of slopes. Building a faceted structure, however, is just plain awkward and getting it more-or-less right took a lot of trail-and-error.

4 comments on “He is out there... Blue Thunder”