Apart from a few manufacturers of exotic sports cars and an assembly plant for Minis, the Netherlands don’t have much of a car-building industry. Things are different when it comes to trucks, however, with the Eindhoven-based truck builder DAF being market leader in several European countries. Dutchman Nanko Klein Paste has built several DAFs in the last few years. His latest is a classic T 2400 DO, which represents an early attempt by DAF at building a truck for the international market. 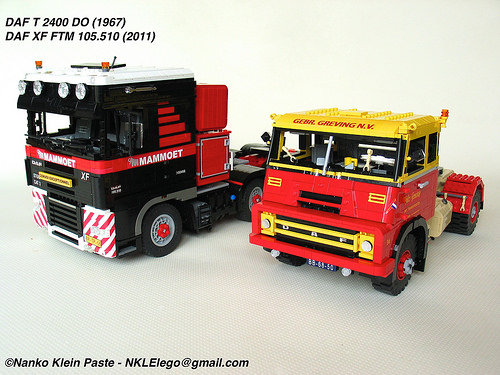 Versions of this truck were in production until 1975 and when I was a child they were still a fairly common sight on Dutch roads. The characteristic sloped front of the cab is particularly well captured. This classic model is flanked by a modern XF105, in the livery of the heavy lifting company Mammoet (Mammoth), which makes for a particularly nice comparison between the two generations.