Whenever TT Games releases a new computer game, people who made significant contributions to the game in question are presented with launch bricks. We had two of these to give away several years ago, but they are normally not available to people outside the company. However, through the help of TT games designer Carl Greatrix, a launch brick from the latest Hobbit Game, with a Bard The Bowman minifigure, has been given to Fairy Bricks, which is a UK charity that donates LEGO sets to hospitals and hospices. 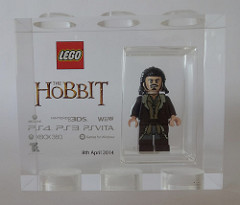 Fairy Bricks is now auctioning this brick via eBay; an extremely rare opportunity to get your hands on this exclusive item. I’m sometimes shocked by the amounts of money that are being paid for LEGO collectables, but with the proceeds going to a good cause in this case, I’ll say start your bidding!