Popular culture is filled with many iconic fictional spacecraft, but relatively few factual ones. But to anyone old enough to remember Carl Sagan’s TV series Cosmos, or young enough to have enjoyed its more recent incarnation, the image below will stir up many fond memories!

It is of course a NASA Voyager probe, faithfully recreated in LEGO by Ryan H (eldeem)… 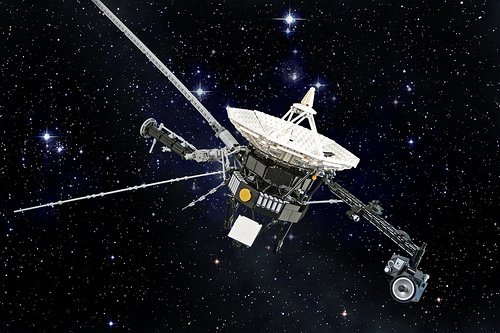 Launched in the 1970’s, NASA’s Pioneer 10 and Pioneer 11 spacecraft were actually the first to explore the outer solar system, and the first to carry a message for any aliens that might encounter them. But the later Voyager 1 and Voyager 2 probes gained much more notoriety, with their more ambitious missions and superior imaging capabilities. Even the “message from Earth” got an upgrade, from a simple plaque, to a recording containing images and sounds from Earth (which you can even see in Ryan’s model above).

Lasting more than a decade, the Voyager missions were much longer than anything the public were used to at that time. Every few years one of the spacecraft would reach its next target, and the world would be caught up in Voyager fever all over again, as amazing images of far-off worlds flooded our screens. Still transmitting to this day, the Voyager probes are among the most distant man-made objects in existence, and are now at the very edge of the solar system, headed for interstellar space.

Ryan’s Voyager is a commission for the University of Colorado, and will be on display at the CU Heritage Center from mid-September. Go check it out!