The Battle of Stalingrad continue to fascinate me. Stalingrad became a symbolic battle of the wills between two totalitarian dictators that manifested itself in devastating real-world consequences for over a million men and women who died on the front lines. For me, building LEGO models inspired by such a brutal battle isn’t about cool things that go “Boom!” Using LEGO to build vehicles, minifigs, and dioramas of historical events puts me in touch with aspects of history that I wouldn’t normally explore — I’m reading Antony Beevor’s excellent Stalingrad: The Fateful Siege: 1942-1943

alongside my building process.

Back on the 71st anniversary of the end of the battle in February, I posted a small diorama titled Victory in Stalingrad, but didn’t post any of the actual vehicles or minifigs, since I was building toward a much larger diorama for BrickCon this October. I finally managed to take some pictures yesterday. 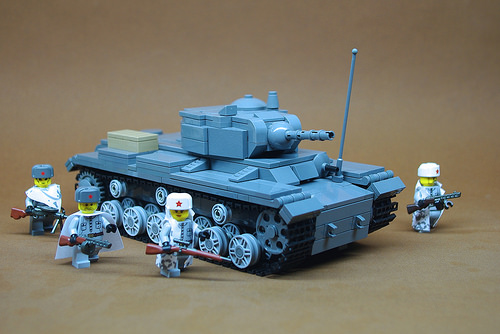 Not much has changed since February on my KV-1s Heavy Tank (“KV-1s” is the model of the tank, a faster and lighter variant with a lower turret), but I’ve removed the extra plate between the turret and the hull and added some ammunition crates on the rear deck. 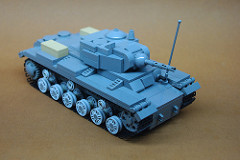 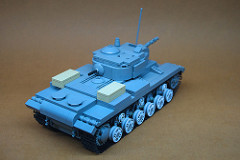 The KV-2 Heavy Artillery Tank was based on the KV-1 chassis, so a LEGO KV-2 to follow my KV-1 was inevitable. The monstrous turret enabled me to build quite a bit more functionality into the KV-2, including a fully elevating gun, as well as hatches on the top and rear that both open. 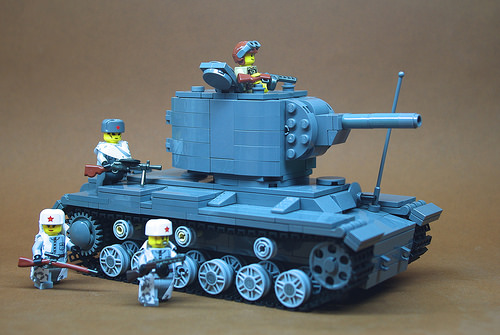 I really enjoyed building with the first batch of BrickMania Track Links I got back in January, and I’ve been looking for new tracked vehicles to build that could take advantage of these great accessories (my two KV tanks needed three-wide track, so official LEGO treads were more technically accurate for the scale). The BT-7 was a light cavalry tank designed for speed in the 1930’s. 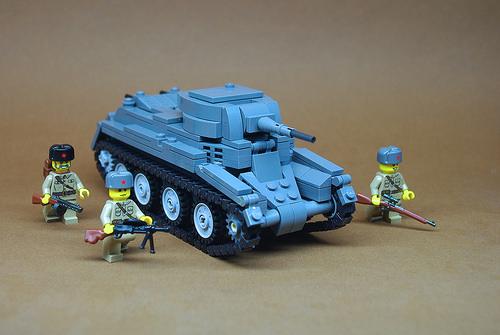 The strange, curvy shape on the front proved a challenge, but a combination of small slopes, wedge plates, and hinges seems to have captured the overall shape reasonably well.

The BT-7 saw combat against the initial German invasion of the Soviet Union in 1941 (Operation Barbarossa), and was based on the earlier BT-5 from 1933. The designs were close enough that I felt compelled to build a BT-5 as well. As is typical of the evolution of tank designs from the 1930’s into the 1940’s, the BT-7’s turret is more sloped than the BT-5’s turret. 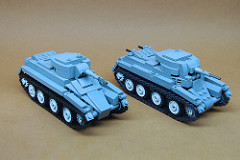 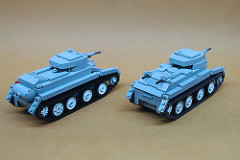 For a collaborative display at BrickCon in Seattle this October, I’m working on a fairly large diorama that will highlight many of the vehicles in this post. For BrickCon’s Spring Exhibition back in April, Sean Edmison and I pulled together what we had so far. Sean took some great pictures of our work in progress and graciously let me share them. My section is currently 96 studs by 96 studs in area, and includes two ruined apartment buildings, a factory, and a small rail yard. 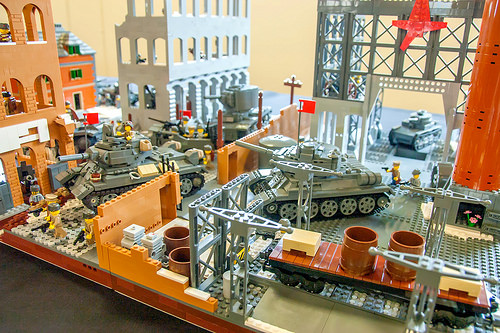 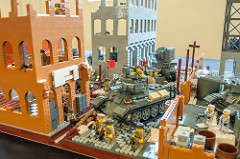 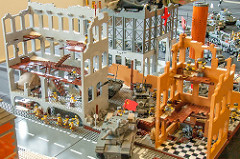 I built up the diorama by two bricks from the baseplate, which enabled me to add a basement to the larger gray apartment building (the basement has a medical aid station) as well as a trench system connecting all the buildings. My favorite detail is the cobblestone street, built with about a thousand 1×1 round tiles I grabbed in a Pick-a-Brick cup from my local LEGO Store. I’ll be adding another 48×96 section between the two halves to open it up a bit more by BrickCon.

In addition to my own vehicle designs, the diorama includes two customized BrickMania T-34 tanks (along with a T-26 light tank and some small artillery). The T-34/85 that inspired the BrickMania kit designed by Dan Siskind wasn’t introduced until 1944, so I customized the kit model to make it more accurate for 1942-1943 and built a second T-34/76 from scratch. My T-34/76 has a slightly different turret design, featuring a pair of forward-opening hatches that German soldiers nicknamed “Mickey Mouse.” 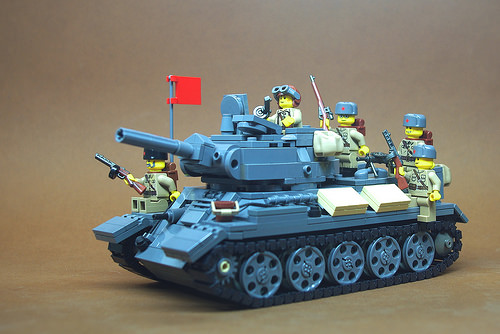 (Micro-review: As I’ve said in my past reviews of BrickMania kits — with more coming in the future, I promise — building someone else’s design can be a great learning experience and quite inspiring. The BrickMania T-34/85 is a stellar custom kit, despite the rubber bands holding the spare fuel tanks in place.)

Finally, no diorama would be complete without an army of minifigs. I never thought I’d find myself turning into an army-builder, but at this scale a squad or two would make the scene rather underpopulated. By now, I’ve recruited over thirty Soviet troops, many featuring custom-printed details from Citizen Brick and accessories from BrickArms. These eight feature overmolded “BrickArms Reloaded” weapons. 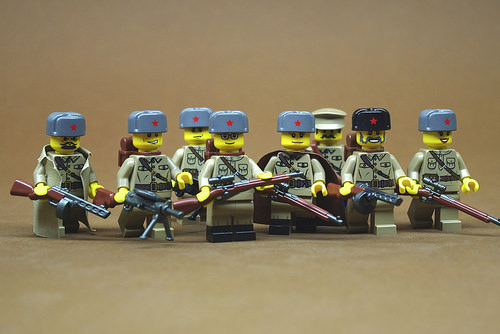