Better known for his mechs, Kyle (BermudaFreze) showed up to BrickWorld this this impressive SHIP. Though it’s not the first time Kyle has built a SHIP, his previous one took home best Space Ship at BW2010, and had possibly one of the best Swoosh/PEW PEW PEW pictures taken.

While some may argue that the forward guns are a bit of a cheat to hit the arbitrary 100 stud threshold for a SHIP (Seriously Huge Investment in Parts), I don’t think anyone can argue how great this build is. From the nicely placed cheese wedge built caution stripes, to the fantastic forward slopped angles, to the colour stripes this thing is gorgeous. And don’t forget the light up engines: 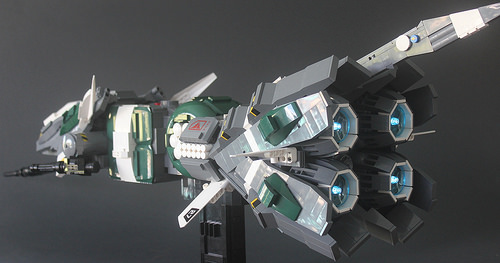 This was definitely one of my favorite space builds from BrickWorld, and was one that I constantly told people to go see … unfortunately it was set up beside among Kurt Vinnedge‘s builds, and I mistakenly attributed the SHIP to him … sorry! This is a good reminder to fill out your MOC cards! So people will know who built what (and be eligible for awards).