Through the leaning pose of this futuristic rider, and the outstretched limbs of his steed, Hungarian builder and artist Kristof (legoalbert) manages to impart a beautiful sense of motion to this creation using relatively few bricks. It’s not hard to visualize the leaping gait of this long-legged robot as it efficiently navigates the obstacles of some other-worldly landscape. 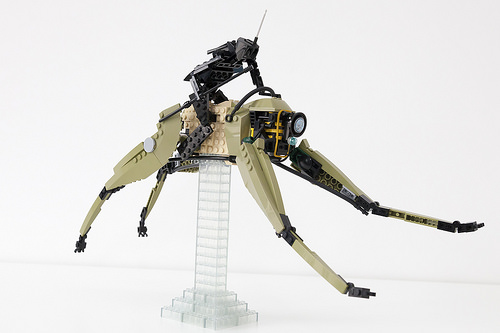 But the poetic backstory to this figure really completes the piece and leaves me wanting to see more of the savage world in Kristof’s imagination:

“Dark cloaked shadow-men patrol the wilderness of the Afterworld, roaming around on their tall artificial mounts. Swiftly rushing trough the densest of the forests, zig-zagging on the streets of the dead cities, they’re only vulnerable to the Vultures of the Plain, out in the endless grassfields, where the Insectmen rule.”