Carl Greatrix (Brictrix) is mostly and rightfully known for his excellent minifig scale train models. However, the train layouts he brings to shows also often feature beautifully constructed buildings and classic cars. It is no surprise to me then that, now he has turned his attention to building a scale model of a car, the end result is superb. The car in question is a seventies motorsport icon: the Ferrari 312T4 Formula One racer. The model was inspired by the highly detailed plastic scale models in old catalogues by the Japanese Tamiya brand. I used to have one of those too, as a teenager, and spent many hours pouring over it looking for inspiration for my models. 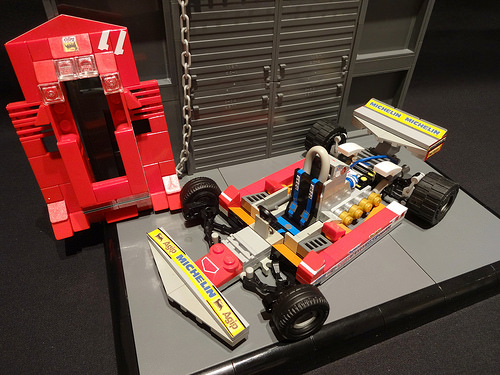 I have a bit of a love-hate relationship with Ferrari Formula One cars. Some of them are beautiful. Others, not so much, although I suppose that on a race car, “form follows function” has a certain attractiveness on its own. As far as I am concerned, the 312T4 isn’t particularly pretty either, but Carl’s rendition is definitely spot-on.