70401 Gold Getaway is the obligatory carriage/chase scene set from LEGO’s newly rebooted Castle line. With 199 pieces and a $20 USD price-point, it falls in the middle of the scale for LEGO’s carriage sets (Amazon actually has it for less at the time of writing). 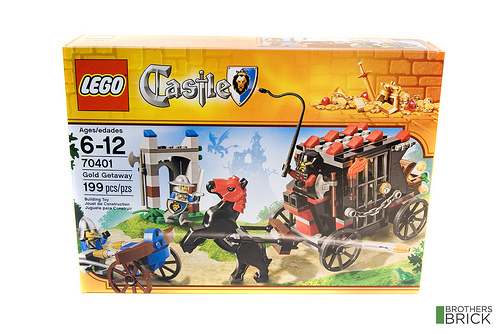 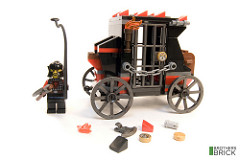 LEGO has a long history of prisoner transport wagons, releasing them in 1985, 1990, 2005, 2007, 2010, and now 2013, with this one being one of the larger. Thematically, LEGO’s new castle line syncs with the Castle line from the “Fantasy Era” (circa 2007-2009), since the “CASTLE” logo remains the same, and the heraldry is identical to that of the Crown Knights, though this time there’s a lion emblem in addition to the crown badge. 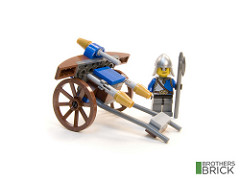 The box contains 2 numbered bags, the instructions, and no stickers or loose parts. With only 199 pieces, it’s a pretty simple build. Bag 1 constructs the 2 Crown Knights soldiers, the small structure, the ballista, and the horse and tack. The structure is hideous. I’m sure the intent of mixing the brown and grey pieces in the structure was to give it a mottled, weathered feel, but it just doesn’t work. It looks like there’s a piece missing on the top of the back side, although with a structure this small front and back have little meaning. I’m not sure what the structure is even supposed to be; there’s no place to put a figure on top, like a small tower, and the bottom is open, so it’s not a defensible structure. I thought perhaps the instructions would give a hint, but alas, no such luck. I suppose it’s simply a doorway for one of the knights to pop out and surprise the wagon. The ballista is better, however. For all my loathing of flick-fire missiles, I do have to admit that when placed properly, they can work quite well. A good finger flick on the missile piece here sends the missile flying several feet, once you get the hang of it. The ballista carries ammo for 3 shots. 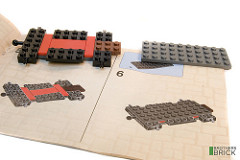 Bag 2 completes the set, containing the pieces for the wagon and the Dragon Knight soldier. The wagon is an OK build, but uninspiring. It’s a single horse wagon, with an immobile grate on one side, and a barred-door on the other. It carries a treasure chest on the back. The base contains several hidden tiles. I thought as I was building it that this was to enable the prison section to be removed from the chassis to create a standalone structure. Upon completing the build though, I discovered this wasn’t the case, and the wagon is firmly built as one piece. The only other reason I can determine is that this particular arrangement of pieces means that there are no plates stuck completely within the underside of the larger grey plate where LEGO’s brick separator can’t remove them. I don’t recall LEGO being shy about this in the past, but as long as it doesn’t hamper ingenuity, I think it’s a good idea. The roof is removable, more as an access point than as a play feature. The red 1×1 “cheese” slopes on the roof look like an afterthought. The main play feature of the wagon, however, is the explosive bolt on the chain over the door. Push a Technic axle protruding on the opposite side, and a flick-fire missile to which the chain attaches flies out, “unlocking” the door. It works well, though I think the “lock” 1×1 round tile (which is a neat print) would be better placed on the chain than on the door, since it’s the chain that really unlocks. The unlocking mechanism, cool though it may be, isn’t really necessary though, since any prisoner can easily escape through the gaping hole in the back of the wagon. 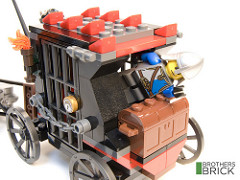 The wagon’s pearl dark grey wheels are a welcome change from 30 years of brown wheels, and are currently unique to this set. The horse tack is brick-built to take advantage of the new style horse’s ability to rear while in the harness, instead of using the classic harness piece. I thought that maybe with the new style horses, that classic piece might be phased out, but it appears in many sets that use the new horse. This was the first set I’ve gotten that includes the new style champron (that’s the armor piece that goes on a horse’s head). Here’s a comparison shot between the 3 styles of champrons LEGO has made. The two older styles only work on the old horses, and likewise the new one only works on the new horse. I like all 3, and I think they 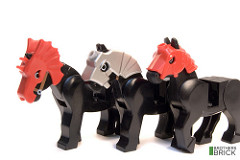 will all have their places. The chest on the back of the wagon contains 3 gems and 6 “coins,” which are 1×1 pearl gold round tiles. Now, I love the new 1×1 round tiles, so I’m always happy to get more of them, but they make lousy coins compared to the chrome ones LEGO has been using for years (and which they recently redesigned). Since the chrome coins do appear in other sets in this line, I’m guessing the substitution here was to shy away from using chrome parts, which are famously expensive. 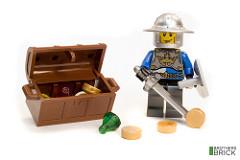 The minifigs are all solid. LEGO has determined over the past few years that kids really identify with the minifigs, and that they are a strong selling point in any set, so they’ve been slowly working more detail into each figure, regardless of theme. All 3 minifigs have detailed front and rear torso printing. One of the Crown Knights soldiers is in full plate armor, while the other is wearing a tunic. The minifigs are definitely the highlight of this theme. 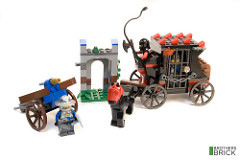 All in all, this set is very underwhelming. It’s just one example of many from this wave of Castle sets that shows that the general increase in the quality of construction we’ve seen in most sets for the last 6 years or so isn’t immune to hiccups. Compared to the preceding Kingdoms line, this wave of sets is a profound disappointment. This CASTLE line is reminiscent of Knights Kingdom I, which wasn’t the worst Castle line LEGO has produced, but it’s far from a compliment. The parts in this set are fair, and unlike the KK1 line, it isn’t full of large simple pieces. So ultimately, it’s a passable parts pack, and the minifigs are excellent, but I can’t recommend Gold Getaway as a set.