It was my distinct pleasure to attend the 12th annual BrickCon in Seattle last weekend along with about half of TBB’s contributors, hundreds of talented builders and thousands of slack-jawed public hours gawkers. While I’m sure you’ll be seeing and reading more about the convention from my Brothers, I’ll be focusing this post on a collaborative sci-fi project I took part in called Hub 14 that featured 23 builders from Brazil, Canada, Germany and a U.S. contingent that included both Alaska and Hawaii. 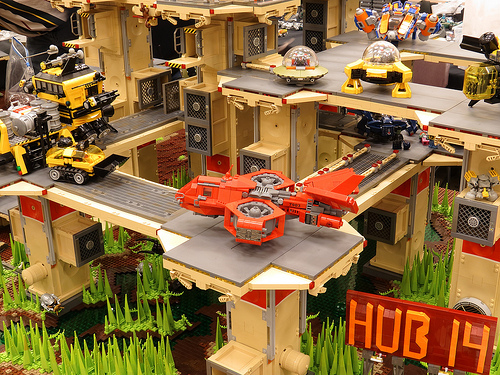 Hub 14 was a sprawling 4ft by 12ft slice of alien landscape that included an air-traffic control hub, landing pads and swampy terrain that provided a stage for dozens of VTOL spaceships, mecha, minifigs, monsters, hard-suits and personal conveyances of every variety. Although it apparently won a category award of some kind (I didn’t actually see it happen) Hub creator Michael Rutherford claims that no trophy was actually distributed and if there was he had no specific knowledge of such an artifact. The real value of the Hub was the camaraderie enjoyed by its participants and the shared effort to bring the diorama to life. Clear evidence of the spirit of the Hub was the exchange of VTOL’s by many of the builders at the end of the convention, with nobody being more generous than Simon Liu, who basically gave everything away. Everyone pitched in from set-up to tear-down and I think I can safely say that a good time was had along the way. My favorite aspect of the project was meeting and working with some of my favorite builders that I’ve somehow missed in my convention travels, people like Pascal, Gilcelio, Nick, Sam, Chris, Aaron, Adam, Evan, Ryan, Simon and Will. While it’s great to work with beloved cronies like Mark, Breanne, Bram, Josh, Ian and Ley (to name a few) there is a special thrill adding new blood to the mix. I learned a great deal about collaboration along the way and I feel like I’m a better builder as a result. 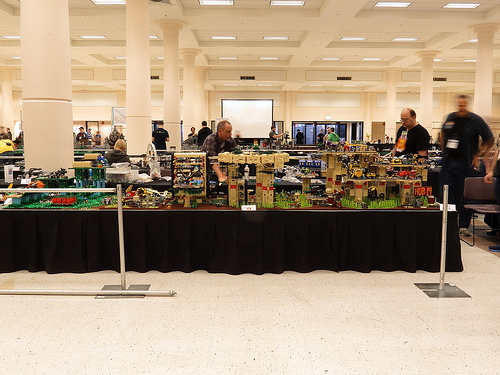 But there was also a dark side to the shenanigans occurring at Hub 14, most notably this truly disturbing and deadly embrace shared by Michael Rutherford and Ryan Wilhelm. While this borderline cosplay only lasted a brief 3 and a half minutes to get as fellow Hubbite Simon Liu put it “Just the right shot“, it seemed to most observers that time was slowed like Neo stopping incoming bullets in The Matrix. I like to think I’ve been to my share of conventions and seen some odd behavior out of my fellow Lego nerds, but this was a whole new level of strangeness….at least in the on-site venue. I still wake up screaming, thinking about this terrible soul-kiss…and yes constant reader…there was tongue. 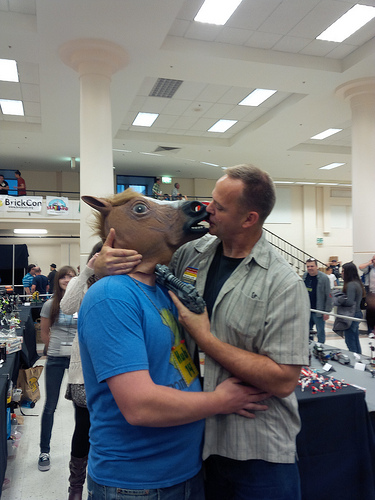 Although my final anecdote is only superficially related to Hub 14, it is without qualification, the best. No doubt as a result of his association with the Hub, the eternally effervescent Nick Trotta was approached by Lego’s own Keith Severson (Sr. Manager of Community Support) about taking Nick’s “Solar Sweeper” starfighter back to Billund to be displayed within their innovation studio. Apparently it will be set up in an area for LEGO designers to regularly see and take some inspiration from what our awesome building community is up to. In Nick’s own understated words “Wow!“. After meeting Nick and his long suffering (and much funnier) wife Adelle, I can safely say it couldn’t have happened to a nicer, more humble dude. So keep hope alive constant reader, if you have the requisite skills you might just get “discovered” at a convention. 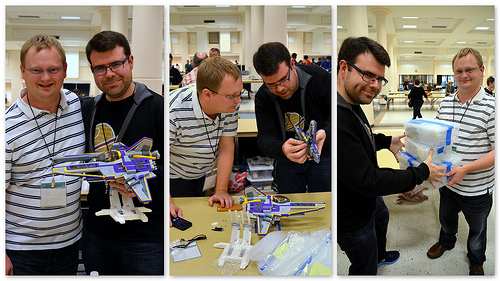 So many thanks to the hard working and hard partying international crew of builders that was Hub 14, you guys (and gal) are the best. The project would not have been possible without the generosity and logistical assistance from TBB’s elder statesman Andrew Becraft who not only allowed me to ship 10 boxes to his domicile but also moved them to the venue and shipped them back without so much as a complaint. Thanks also to Wayne Hussey and team for another fabulous BrickCon! If you are interested in the specific contributions of each member you can follow the links throughout the article or head on over to Ryan Rubino’s photostream for additional action. Due to post-convention hangover disorder (PCHD), some of the contributors have not yet officially posted their models to Flickr, so stay tuned to your stream for more details. There is a public Group Pool for the Hub, but again, because of PCHD it is still in its infancy. 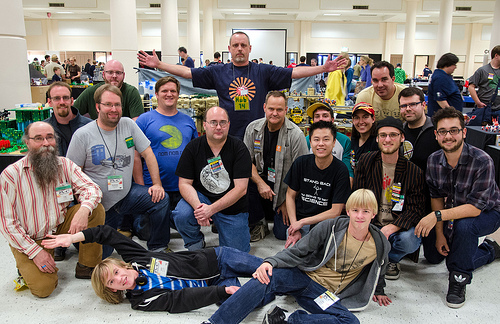 I’ve been told by experts in the know that this sort of coverage isn’t well loved by our audience and usually results in a downward spike in statistical interest, so thank you for your indulgence. If you have a thought you’d like to share on the topic of convention coverage I’d love to read about it in the comments.