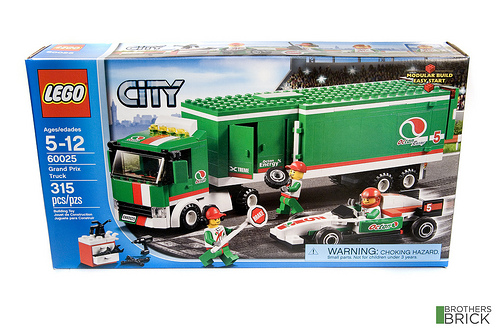 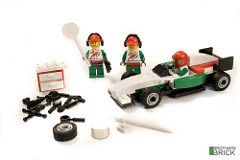 Octan is LEGO’s fictional energy company, and is replete with its own gas stations, rail lines, trucks, and plenty of racing sponsorships. I’ve loved Octan ever since I got 6594 Gas Transit for Christmas when I was a kid, so I’d been looking for an excuse to pick up the new Grand Prix Truck, which is a Formula 1 racecar and transport truck decked out in Octan colors.

60025 Grand Prix Truck has 315 pieces, and retails for USD $30. Inside the box are 4 numbered bags and 3 instruction booklets, which seems a little excessive for a set with only 300 pieces, but it’s really of little consequence. As usual, my sticker sheet was crumpled pretty badly, but I didn’t plan on applying them anyway. There were also two loose large plates in the box, which are the top and bottom of the trailer.

The first bag builds the crew, the racecar, and the toolbox. The car is a pretty simple yet effective build, and I did like the sideways double slopes to make the cockpit sides, which is both efficient and looks great. The kit also makes great use of the Formula 1 car nose and front wings piece from the Disney Cars line. The tool set included here is also new, having changed from the basic set of 6 tools on a sprue wheel that has been standard for almost 20 years to a new set of 9 tools. I’ll miss the old tools, but the new ones are super cool, too. The lug wrench, in particular, looks extremely useful, since it’s basically an X-shaped rod. Some of the tools are almost unchanged, but other tools have been redesigned to fit with LEGO dimensions in subtly different ways, and there are a few new additions, like the adjustable wrench. 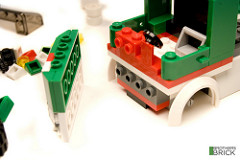 The second bag contains the pieces for the truck. The truck is pretty standard, though I do wish it had 3 axles instead of only 2. There are several nice SNOT segments, such as the grill and the gas tanks on the sides. The front of the cab contains some good uses of lesser known SNOT pieces. LEGO designers have become much more receptive to using SNOT over the last decade, which is great. The complexity and accuracy of models is growing immensely, contrary to what my non-LEGO-fan coworkers and friends lament about frequently: “LEGOs were better when I was a kid; there weren’t all these special pieces that make it 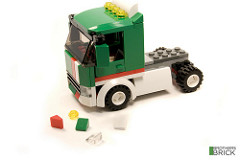 too easy.” Take a look at that Gas Truck that I had as a kid; the cab is essentially the same sort of vehicle as the one in the Grand Prix Truck, but the difference between the two is enormous. 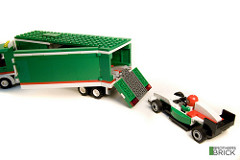 ramp for the car. Unfortunately, the ramp is way too steep for the car to traverse; LEGO ought to have designed a hinged-ramp that can fold out to provide a shallower assent; as it is, driving the car into the trailer is pretty much a useless play feature, but if the ramp actually worked it would be great fun. The inside of the trailer is completely bare, but this would the perfect spot for lots of customization like adding tool racks and posters. 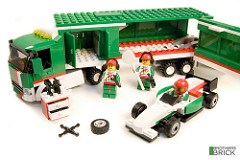 This is a solid set. The Octan colors are fun and interesting, and the vehicles feel weighty. The $30 price point feels justified here. There aren’t many unique pieces here, but for once I think that’s a boon. I can easily imagine someone having a lot of fun using the instructions to build a whole fleet of these cars and trucks in different team colors and having an epic race day.